Item 3 of 10
This is a contributing entry for Arab Indianapolis Heritage Trail and only appears as part of that tour.Learn More.

Among the many Americans memorialized at the Indiana War Memorials are Hoosiers of Arab descent. Arab Americans began serving in the U.S. military in large numbers during World War I and have done so in every war since. In World War II, it was often the children of immigrants who often wore the uniform, and some, commemorated in both the main building and the World War II memorial, made the ultimate sacrifice. Like others from American ethnic groups sometimes seen by the white majority as "foreign," Arab Americans identified military service as an important proof of their patriotism and belonging. 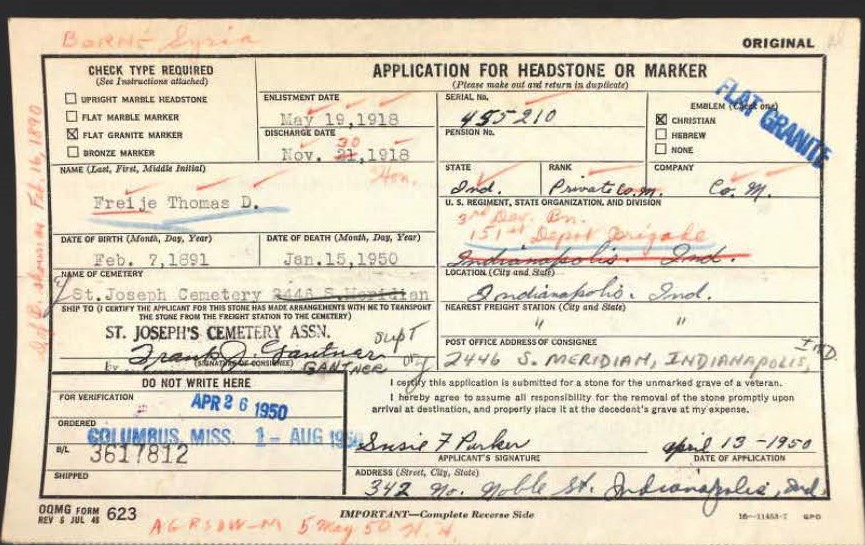 World War I cut off immigration from the Arabic-speaking world. Many Arab Americans who had thought that they might one day return to the Arab world decided to become US citizens. One way of earning that citizenship was through military service. According to the US War Department, 13,965 Syrian Americans—something like 7 to 14 percent of the total Syrian American population—wore the uniform during World War I. But there were other reasons why serving in the military was viewed in a positive light. Christian and Muslim Syrians, citizens of the Ottoman Empire, generally favored the movement for Syrian independence from the Ottomans. Because the Ottomans were allies to the Germans in World War I, many Syrian Americans hoped that the defeat of the Ottomans at the hands of the British, French, and Americans would result in freedom for Syria.

Some Arab Americans served in the US military because it was law. Among their number was Indianapolis resident Thomas D. Freije, who was born around 1891 in the village of Zahlé, located in the Bekaa Valley of what today is Lebanon. When he registered for the draft in 1917, Thomas Freije was already a naturalized citizen of the United States, which meant that he had to serve if called. He claimed an exemption because he needed to take care of his parents. His father, David Freije, was around seventy years old, and Thomas managed the family grocery store. Thomas Freije also said he broken a leg in three places. Uncle Sam told him to report for duty anyway, but not for battle. He served from May 19 to November 30, 1918, in the 151st Depot Brigade, in charge of preparing troops to deploy for battle in France. Today, if you walk the long stairs up and down the World War I Memorial in downtown Indianapolis, you can see his name listed among those of the many Hoosiers who served in what was called the Great War.

Perhaps 15,000 or more Arab Americans served in the US military during World War II, and Arab Indianapolis was anxious to do its part. On the home front, there were dances and other fundraisers to support the troops, patriotic speeches to demonstrate the loyalty of Arab Americans to the country, and meetings at the Syrian American Brotherhood and other places to sell war bonds to pay for the war. Many in Arab Indianapolis put their bodies on the line in combat, too.

US Army Technician Fourth Grade James Camill Haboush was just twenty-two years old when he died on the field of battle. Born in Indianapolis on November 24, 1922, he was the child of Syrian immigrants. Camill attended Arsenal Tech High School and also worked in his parents’ grocery store. He came from a patriotic family. As President Roosevelt put the US on a war footing war after 1939, many immigrants became anxious to show that they would be loyal to the United States. In 1941, the local chapter of the Defenders of Democracy staged a rally and parade, inviting Serbians, Greeks, Romanians, and Syrians—Hoosiers whose presence still provoked anxiety among the white, Protestant majority—to join in. As a member of the board of directors of the Syrian American Brotherhood, which was a strong supporter of the war, James Haboush, Camill’s father, was selected to serve on the planning committee.

Camill Haboush was one of a dozen people with his same last name to register for service. One of them was his brother Victor. Camill served in the infantry of the Sixth Army, which was responsible in 1943 and 1944 for expelling Japanese military forces from New Guinea and securing the island as a base for further military operations in the Pacific. In October 1944, the Sixth Army began its invasion of Japanese-occupied Philippines. That month, James Camill Haboush died “in the line of fire,” as his US Army hospital admittance papers said.