The concrete steps in this empty lot offer a clue to the structure that once stood at this location and was home to the first Arabic-speaking religious congregation in Indianapolis. St. George Syrian Orthodox Church, associated with the Antiochian branch of Orthodox Christianity, was built in 1926 on this lot. Though humble in both size and appearance, the church represented the arrival of Syrian and Lebanese Orthodox Christians in a city where membership in a religious congregation was an important passport not only to salvation but also the cultural, social, economic, and political power. 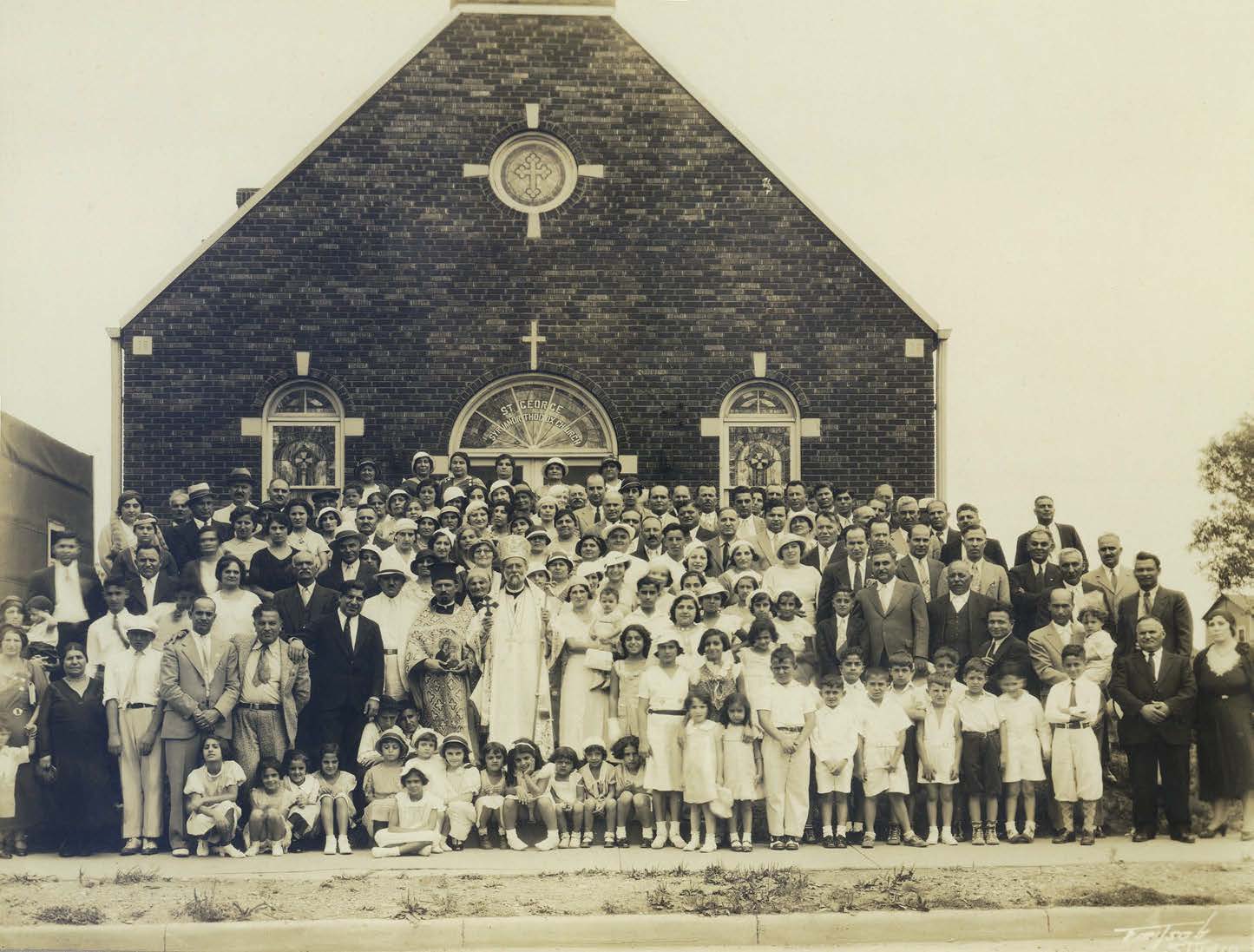 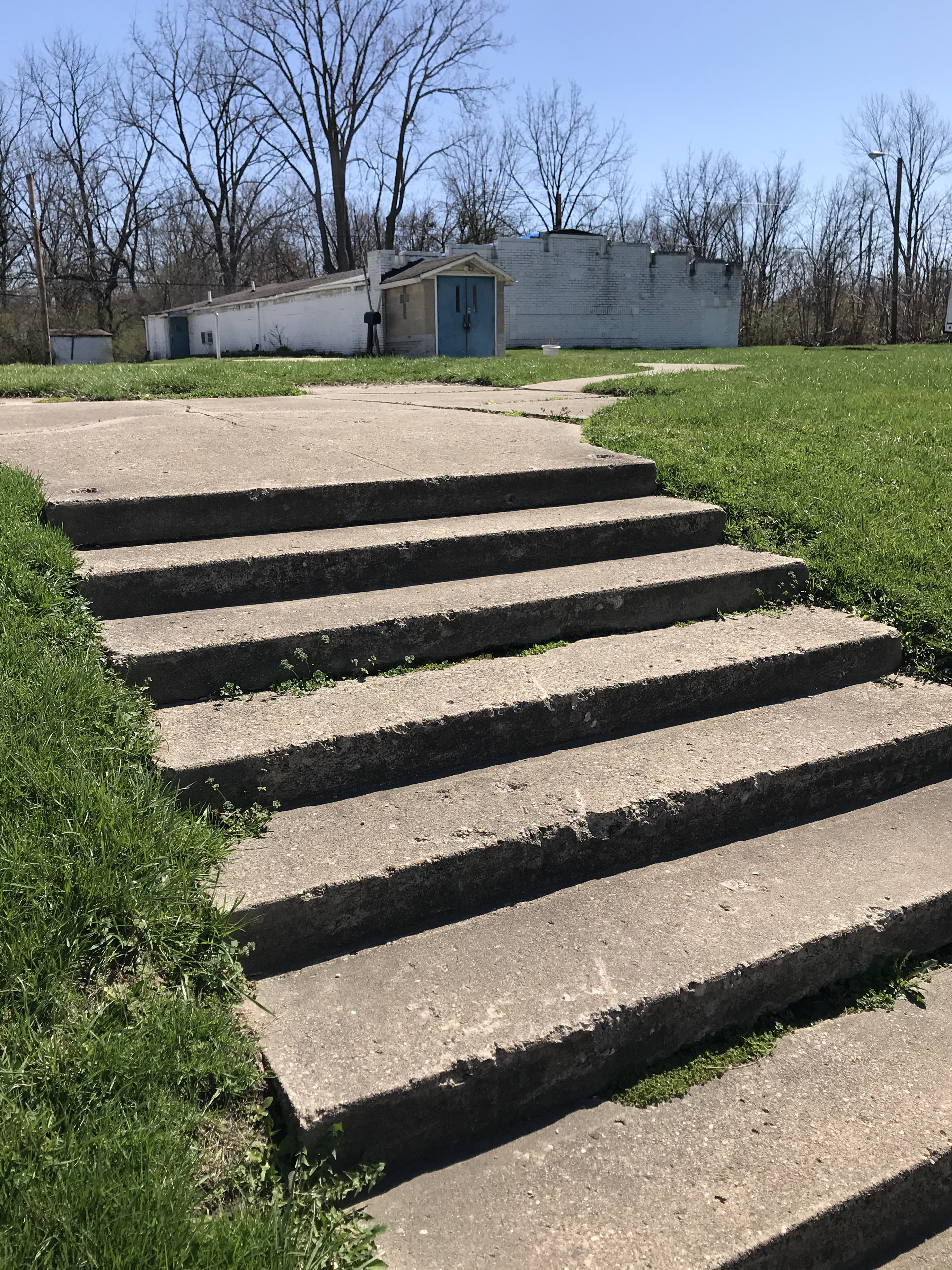 Arriving in the late 1800s, Arabic-speaking Orthodox Christians practiced their religious traditions in each other’s homes, and by 1919, in a Syrian community-owned building on North Davidson Street. In 1925, they began public fundraising for a free-standing church, needing $15,000 to build what they called the “first and only Syrian church in the city.”

Female members of the church organized a tag day. They “wore white ribbons marked Syrian orthodox church,” according to the Indianapolis Star, “and armed with tiny American flags,” they solicited donations around downtown Indianapolis. The Knights of St. George, the male Syrian Christian group in charge of the campaign, asked Hoosiers to support their efforts by signing a petition and contributing to the cause.

The new church, built in 1926, was located in the Brightwood neighborhood. Surrounded by a few brick buildings and wood-framed homes, it was just two and a half blocks north of the Cleveland, Cincinnati, Chicago, and St. Louis Railroad repair shops. That year was a particularly important one for the growth and expansion of religious congregations in the city. Over a million dollars was spent on building and renovating religious congregations, including Carrollton Avenue Reformed, Fairview Presbyterian, Fountain Square Disciples of Christ, Greater St. John Baptist, and St. George: “The dedication of the St. George Syrian Orthodox church at the corner of Twenty-eighth Street and Sherman Drive,” according to a December 31, 1926, article in the Indianapolis Star, “awaits the arrival of the church officials.” In April, 1927, the community’s new religious congregation was officially incorporated as St. George Syrian Antiochian Church Indianapolis.

In June 1935, the church built a clubhouse for the Knight of St. George just behind the church. Indianapolis Mayor John W. Kern spoke at the dedication ceremony. The 750 people in attendance also enjoyed an “oriental” or Arab dinner at 1 o’clock. This building still exists and has been re-purposed by another religious congregation.

St. George Church eventually moved to the suburbs. Its third building, a Byzantine structure featuring a large gold dome and colorful icons, is located in Fishers, Indiana. Built at a cost of about $7 million, it is nothing like the modest brick church that once stood in Brightwood. The congregation is also more ethnically diverse. But St. George still celebrates the heritage of its founders. Its annual Middle East festival cooks up Levantine food and invites guests to dance the dabke the way its founders once did—a fitting celebration of the hard work it took to create the city’s first Syrian church.