Constructed in the 1890s, this Chateau-Romanesque home was designed by the firm of Eckel and Mann. Alfred Smith, a local shoe merchant, commissioned the home, but lost his fortune in the panic of 1893. His family never resided in the home which bears his name, but by 1920 802 Hall Street was the home of John J. Tootle, son of multi-millionaire Milton Tootle. 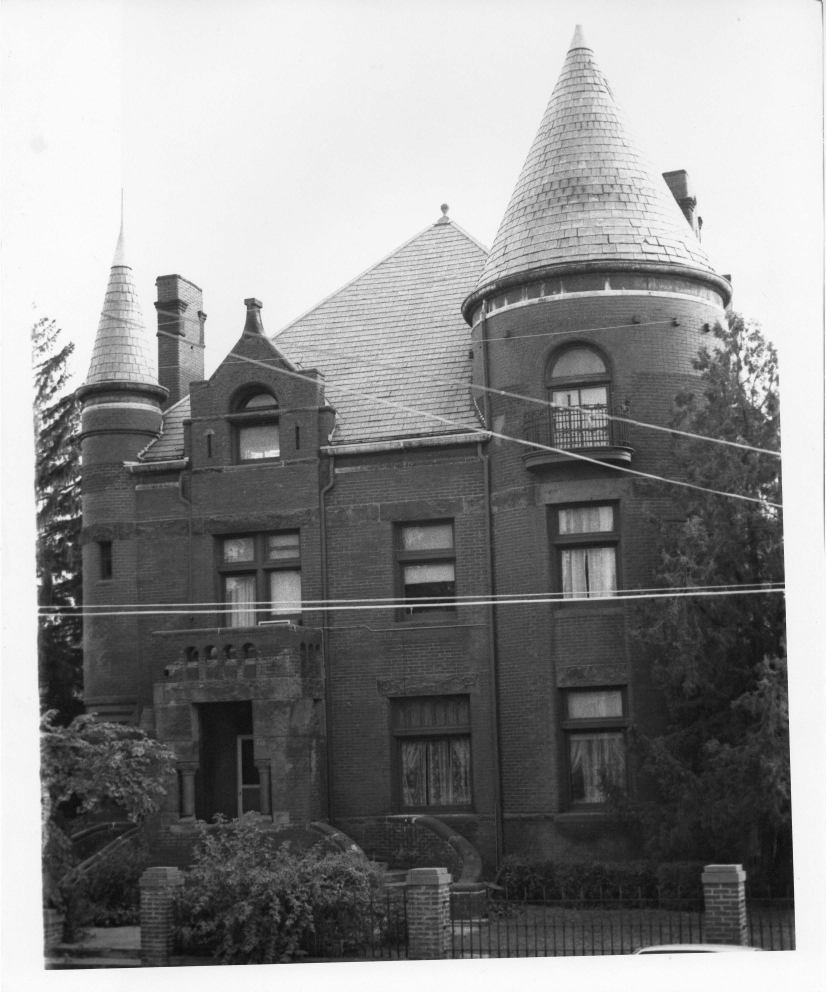 Alfred Thomas Smith was the son of Spotswood and Mary Ann Thompson Smith. He was born in 1839 in Cooper County, MO and came to St. Joseph in the 1860s where he established a boot and shoe wholesale business. He married Corrine Cordell Stevens in 1889 and they had four children. With his shoe business booming, A.T. Smith hired Eckel and Mann to craft a home for him at 802 Hall Street. Unfortunately, his business collapsed in the panic of 1893 and the Smith family was never able to live in the home they had constructed. A.T. Smith joined his brothers in the business of Smith-McCord-Townsend Dry Good Company and worked for them until his death in 1907.

John James Tootle was a second generation multi-millionaire. His father, Milton Tootle, came to Missouri in 1842, settling in Andrew County. Milton Tootle began his rise to fortune as a clerk at the store of George Smith in Savannah, MO, alongside his two brothers, Thomas and Joseph, and William Fairleigh. In 1849 these partners moved to St. Joseph, establishing Tootles & Fairleigh.

In 1860, Milton’s brother Joseph passed away and Thomas withdrew from the company. Milton and William Fairleigh married the sisters, Katherine and Alice O’Neill. Katherine and Milton had three children; a daughter Frances, and two sons, Milton, Jr. and John J. In 1887, the family purchased the Wyeth Mansion at Eleventh and Charles Streets, but Milton, Sr. passed away before they could move into the home. The teenaged children grew up in the mansion and Milton, Jr. resided there with his family for the remainder of his life.

John J. Tootle married divorcee Ella Parker in 1896 and adopted her two daughters as his own. They made their home at 1912 Clay Street with a country home at the corner of Thirty-Sixth and Asylum Road called Cloverly (currently the site of the Bishop LeBlonde High School). They had a daughter of their own, Katherine and in 1919 they moved into the former A.T. Smith home at 802 Hall Street.

John J. Tootle founded the Missouri Valley Trust Company in 1899, constructing the historic building at Fourth and Felix. He was president of the company until 1919 when he sold it to Frank Boder. After the death of his uncle, Thomas Tootle, in 1908, John J. took over the Tootle Dry Goods Company until his retirement in 1949, one hundred years after the Tootle family business was founded.

The home at 802 Hall Street was not completed according to Ellis’ original design, though elements of his style remained. The main facade is asymmetric, as with many of Ellis’ works. There is a mixture of Chateauesque and Romanesque styles with towers and dormers, chimney stacks and steeply pitched roofs. Ornate finials accentuate its roofline. Similar to the McNeely home, the A.T. Smith home featured curved windows accented by heavy columns, tiled fireplaces with marble fronts, a rich woodwork in the interior.

Towers of St. Joseph: The Local Architecture of Harvey Ellis

Harvey Ellis was born in Rochester, New York to Dewitt and Eliza Haseltine Ellis on October 17, 1852. He was the eldest of four brothers, the youngest passing away in infancy. He attended West Point, but was discharged due to failing grades in 1872. Harvey was artistic throughout his youth and after leaving West Point joined a group of artists in Rochester creating and teaching art. They formed the Rochester Art Club, one of the oldest continuing clubs, in 1877. The year of the club's founding, Harvey joined the architectural firm of his brother, Charles. Harvey's art gained national attention and his architectural stylings came to define Rochester. The firm of H. & C.S. Ellis operated in Rochester from 1877-1885, constructing civic and residential buildings throughout their hometown. The brothers consistently made the news, Harvey as a renowned artist and Charles as a member of the school board. Their mother, Eliza, passed away on September 13, 1884 and by the beginning of 1885, the firm became embroiled in a bribery case. Charles was indicted on January 29 on charges of bribing a public official to secure the contract to build the county jail. The trial was messy and heavily publicized and by March, Harvey had left Rochester for Minnesota. After spending some time in St. Paul, Harvey joined the firm of Leroy Buffington in Minneapolis in 1887. Buffington became famous for inventing the skyscraper and was the premiere architect in the Midwest through the 1880s. As Ellis was an award winning architect and artist at the time, it is likely Buffington sought him out for his work. Their styles worked well together and Buffington provided a shining reference for Ellis when he and his wife adopted a Swedish orphan they named Charlie. Harvey Ellis came to St. Joseph in 1889, hired by Eckel and Mann to draft plans for the St. Louis City Hall. Ellis was the highest paid employee at Eckel and Mann from 1889-1891, splitting his time between St. Joseph and St. Louis as construction on the City Hall commenced. Mann and Ellis moved permanently to St. Louis in 1891, creating numerous works for the city until 1893 when Ellis returned to Rochester and restarted the firm with his brother as Charles S. and Harvey Ellis, Architects. Harvey passed away January 2, 1904 leaving a legacy of art and architecture.