The white wood-frame church on New Lots Ave. near Schenck Ave. in East New York is the New Lots Reformed Church, built in the 1820s by and for the local farming community. The church's cemetery originally was on the opposite (north) side of New Lots Avenue from the church, in the seventeenth and eighteenth centuries. That former cemetery reportedly included graves of Revolutionary War soldiers and African-American slaves; a public library and a city park/ playground now stand in this area and the park has been renamed Sankofa Park (also a Clio entry). The cemetery in the churchyard adjacent to the church was reportedly established in 1841; at that time, many of the graves from across the street were moved to this churchyard. The church (and adjacent cemetery) is listed on the National Register of Historic Places as of 1983 and has been a New York City landmark since 1966. The building has served a local congregation as New Lots Community Church for many decades.

View to southwest across cemetery to New Lots Reformed Church in 2009 (Jim.henderson) 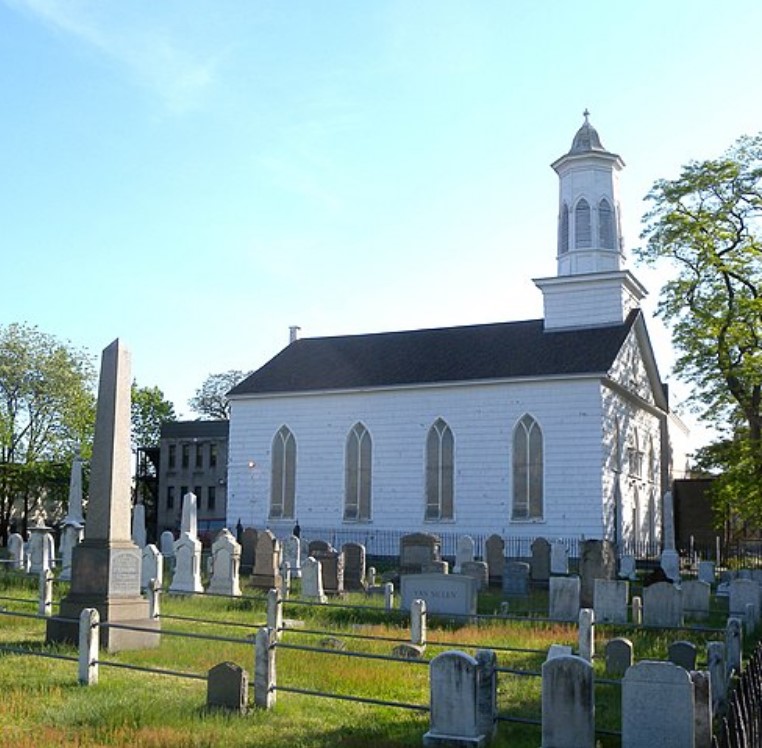 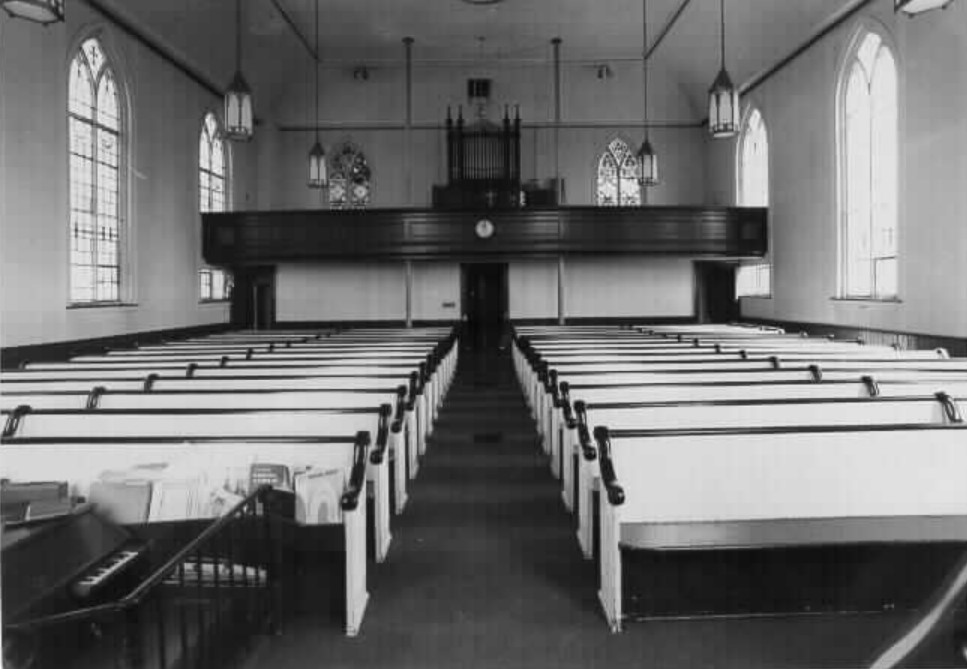 Interior of New Lots Ref. Church, looking down from choir loft in 1980 (Senigo) 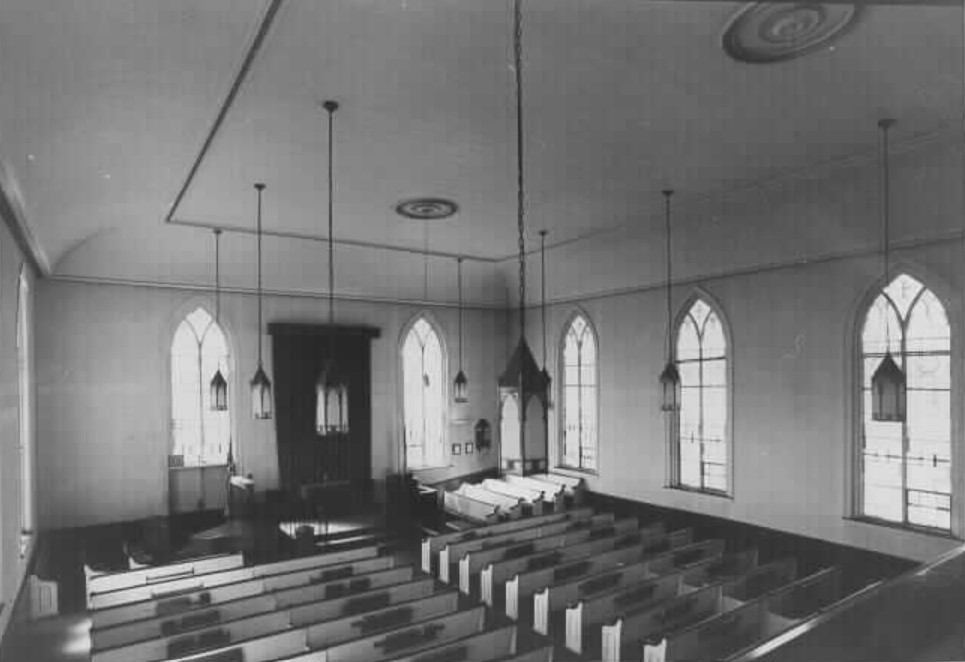 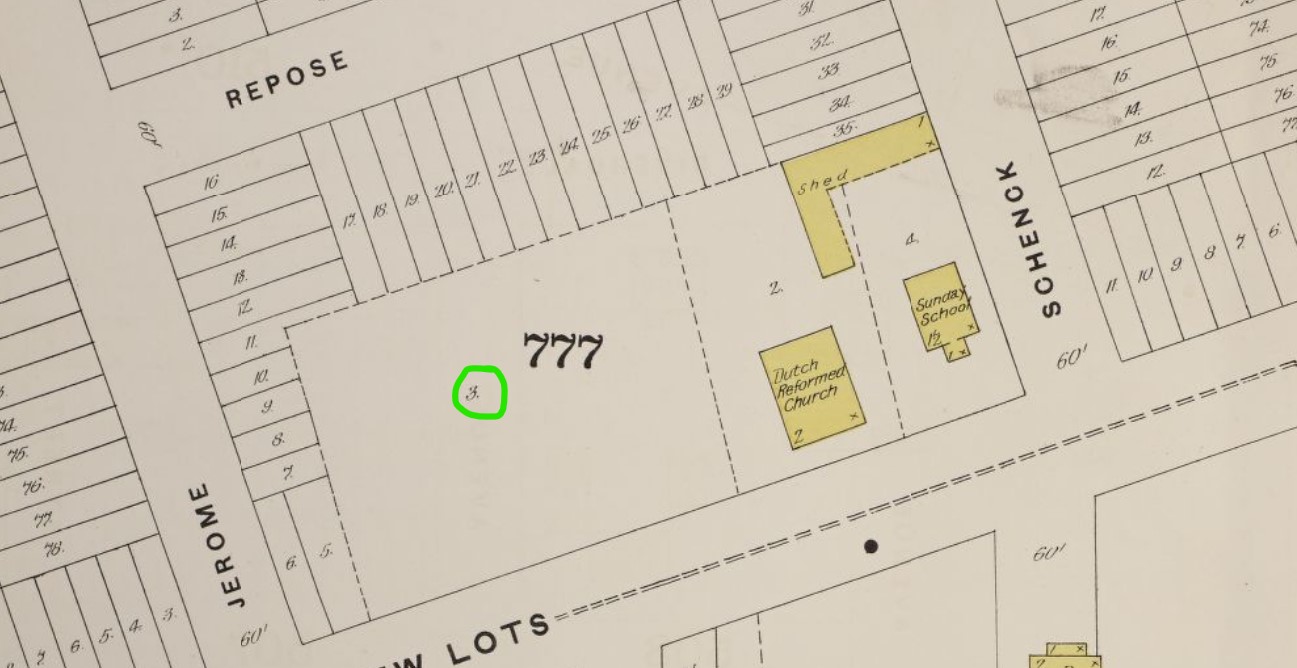 A "pink tea party" where everything was pink was held by the church's Young People's Association in May 1889 to raise funds for improvements for the Sunday school. A nominal price was charged for admission, with extra costs for supper and ice cream. Reverend Nicholas L. Pearce was pastor of New Lots Reformed Church by 1891. He spoke at an event in May 1900 at the Glenmore Ave. Presbyterian Church on the relationship between the working man's labor issues and the church. Pearce stated in part "...the workingmen are more responsible for their condition than any other class. The time for them to protest was years ago before there were so many millionaires. That was the time for them to insist on their rights...The less the minister has to do with politics, the better...It is his business to preach the gospel..." Pearce was described in the 1900 newspaper article as the pastor "of a wealthy congregation."

Local landowners Abraham and Cornelia Van Siclen donated land for the church. The structure was built from 1823 to 1824 using donated labor and lumber of local farmers from their woods, and reportedly only cost $35 to build. No nails (which were pricey) were used to build the church, just wood pegs in notched and joined timber. The white clapboard-sided building on a stone foundation has three paired double doors within pointed arch framing on the front (facing New Lots Avenue), There are windows above each paired door, with the center being a triple window with a pointed arch in the center flanked by two, smaller rectangular openings (apparently an unusual, Palladian-Gothic design). The other two front windows are set in a floral design in stained glass. The clear glass in the four tall windows on the long sides of the church have been replaced with colored glass containing circular religious motifs. A short, square tower tops the building, with a polygonal lantern and louvered windows. The original copper roof of the tower has been replaced by a finial. The interior of the church is simple, with a balcony along the rear wall.

A former parsonage and Sunday School was added later in the nineteenth century on the corner with Schenck Ave., to the right of the church. This building was razed in the mid-twentieth century and replaced with a concrete building that serves as the church's Sunday school (not part of the historic site).