The property at Cool Spring was first surveyed in 1732 and was farmed starting in the 1750s. Through a succession of families, the land was cultivated for different purposes as part of the agricultural development of the region. The farm is distinct for its two side-by-side houses, evidence of the architectural styles of different periods. Cool Spring was placed on National Register in 2007 for significant in the historic agricultural development along Bullskin Run and for its evolution of architecture—Early Republic/Federal Style stone house and Greek Revival influenced main house with Victorian Era changes. 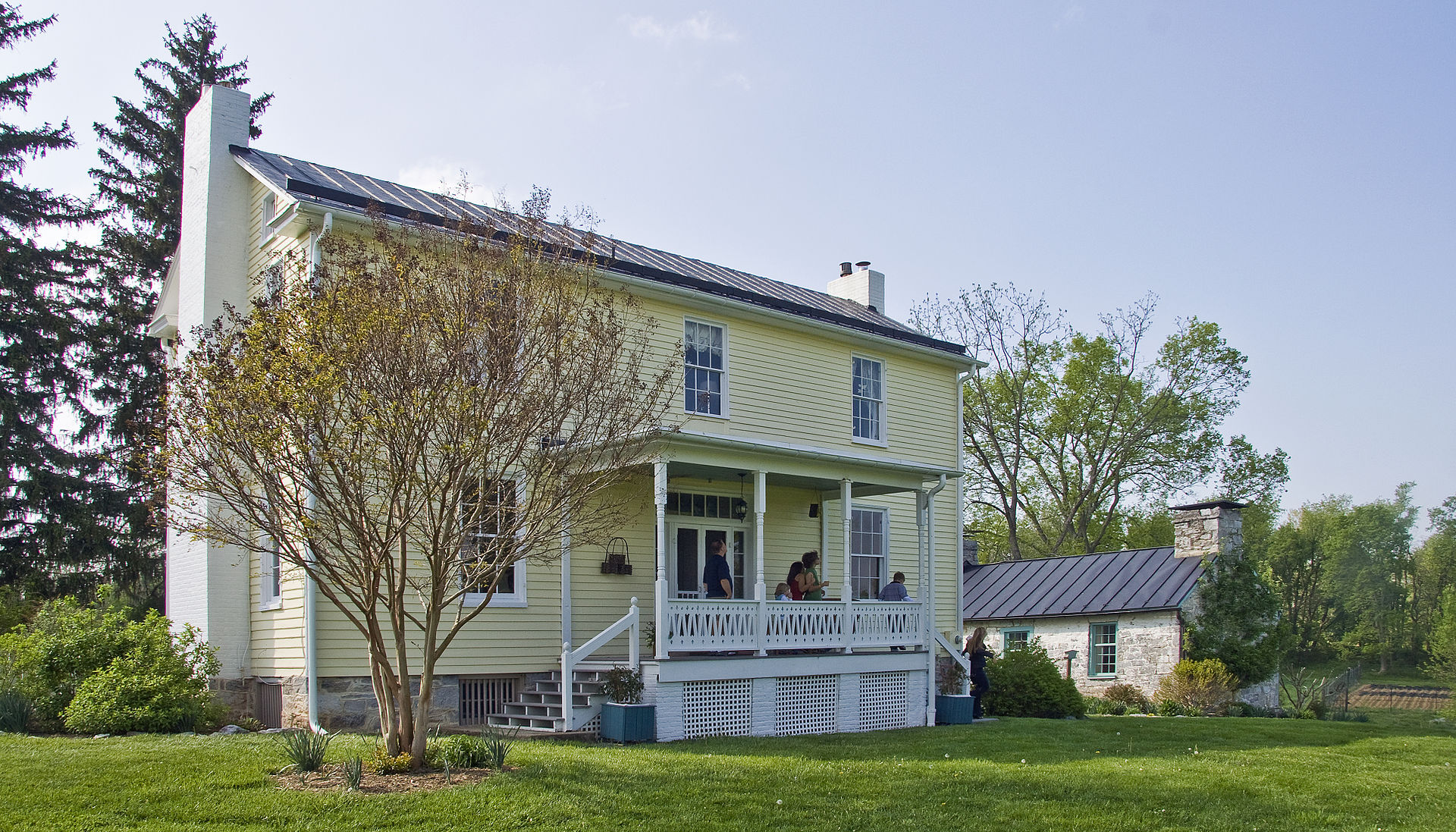 1734 survey, with additional lines for the division of Haines property 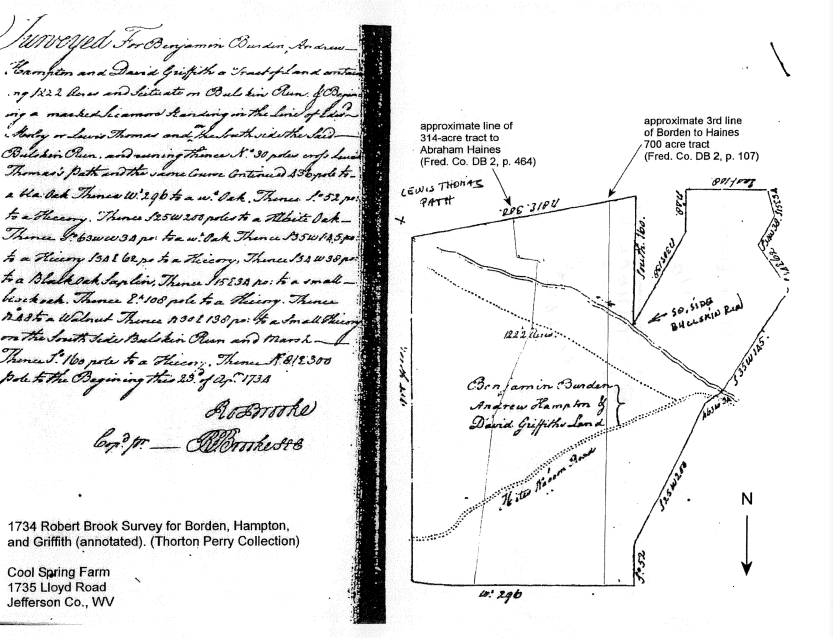 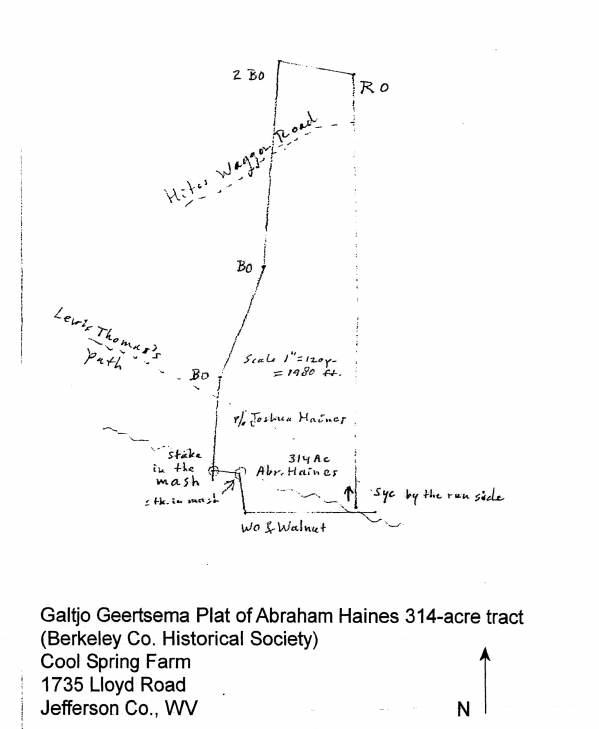 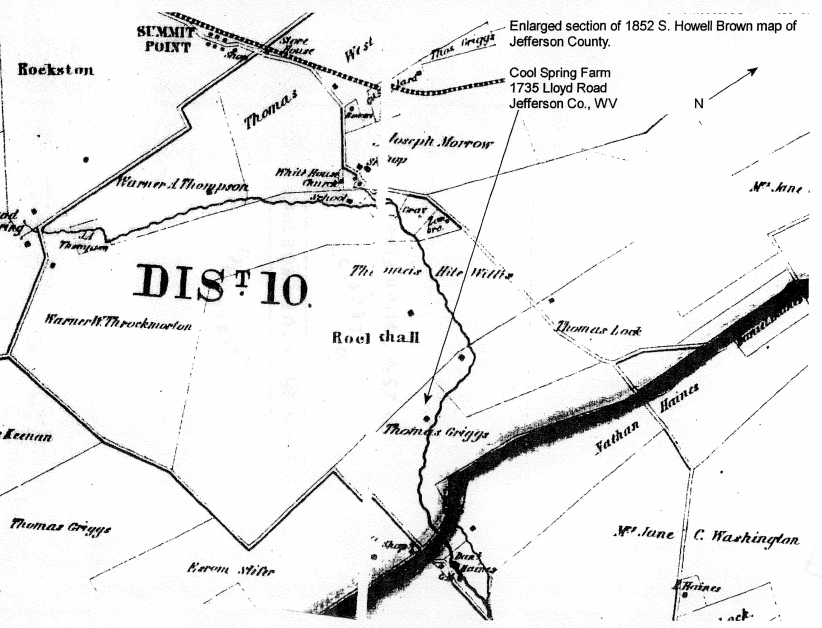 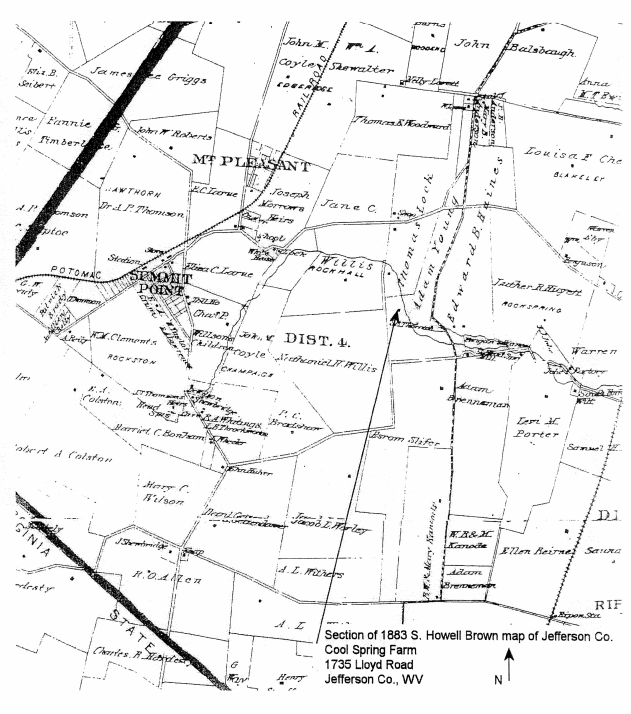 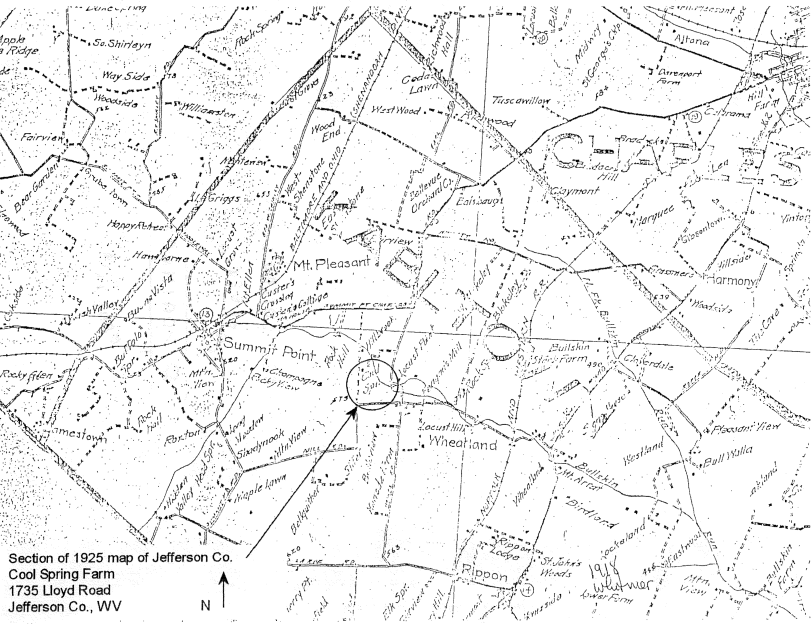 In 1734, a 1,222-acre tract was surveyed for Benjamin Borden, Andrew Hampton, and David Griffin. The three men portioned the land by 1743, with Borden holding 700 acres. In 1745 and 1746 (respectively) Quaker brothers Abraham and Joshua Haines applied to the Haddanfield Meeting in Camden, NJ to join the Opequon Meeting in Frederick County, VA indicating their plans to resettle there. In 1750, Joshua Haines bought the Borden tract from Borden’s son and then in 1752 sold 314 of those acres to Abraham. Of the original 1734 survey, Abraham held the eastern third and Joshua held the middle third. The western third owned by David Griffith was sold by Griffith to James McCracken who sold it to George Washington in 1750 (this became part of Washington’s Rock Hall plantation).

Joshua died in 1754 and his property was appraised by neighbors because he died without a will. Those records do not mention his wife and children, but he did have a daughter who reappeared in the record in 1799 when a part of the property was deeded to a cousin (Nathan Haines, son of Abraham). Mary Haines had married Daniel Collett in 1781 and she was listed as the sole child of Joshua and Mary, thus she inherited the property. Collett’s father was a lessee on the Washington lands; Daniel’s other family emigrated to Kentucky after the Revolutionary War, but Daniel stayed on his wife’s inherited land in Virginia. It is possible that the land that would become Cool Spring was leased or occupied by M. McCormick in the early 1800s—his name appears on an 1803 plat drawn of Washington’s estate, but there is no record of a sale. The 1810 census lists Daniel and Mary Collett, one daughter and four sons, and four free blacks (as Quakers the family did not own slaves although many nearby plantations did).

In 1812 or 1813 brothers John and Jacob Myers purchased 395 acres of land from the Colletts on a mortgage for four years. It is possible the Colletts moved to Ohio because that was referenced in the 1817 mortgage release of the land to the Myers brothers and family lore holds that the use of slave labor in the area was a factor in the Quaker family’s decision to move. Also in 1817 Jacob Myers died and in 1818 the property was officially divided between Jacob’s wife and children and John. John took the southern parcel and Mary (Jacob’s widow) took the northern parcel. It was John Myers that constructed the 1813 stone house at Cool Spring in the Federal style popular at the time. It is a one-story house following a “hall and parlor” plan with one extra room at one end. The exterior stonework uses large stones with keystones above the windows and doors. In 1820 the farm was occupied by John and his wife Susannah, two children, and four slaves.

The Myers sold their farm to Thomas Griggs, Jr. in 1830. Griggs was the son of a wealthy Charleston merchant and landowner and he constructed the 1832 house in the then popular Greek Revival style more typical in urban areas. This two-story house was built as a brick nogged frame (meaning a wooden frame with brick masonry as the fill between the timbers) with wood siding on the exterior. The original layout was two rooms on each floor separated by a central entrance and stair hallway with fireplaces/chimneys at each end (there have been some modifications by modern owners). Griggs and his family lived there for about twenty years, using slave labor (around 10-12 slaves) to farm the land.

In 1857 Griggs sold his land to Ambrose Timberlake, possibly a nephew (son of a Mary Griggs). Timberlake held the estate through the Civil War. Fortunately, Cool Spring did not see much action or damage from the war, unlike many surrounding estates; however, the Civil War took a toll on the value of land and the local economy. In 1869, Timberlake sold 162 acres including the farm to Adam Young. Adam Young and his son, Henry Lee Young, owned Cool Spring from 1869 to 1944. In the 1890s they added a kitchen wing extending off the back of the main house to create an “L” shape and added a Victorian porch to the front. It was the Youngs that named the farm Cool Spring. Henry Lee sold the farm in 1944 to the Blakeley Company who quickly sold it to Victor Product Corporation, owned by Raymond Funkhouser who restored Washington houses in the region. It has gone through several owners since, including being used for orchard production in the 1980s-1990s. The owners who acquired the property in 1998 modernized parts of the main home, included adding an addition inside the “L” of the house with bathrooms and another two-story addition on the south side of the house.