This tour was curated by: Metropolitan Library System of Oklahoma County 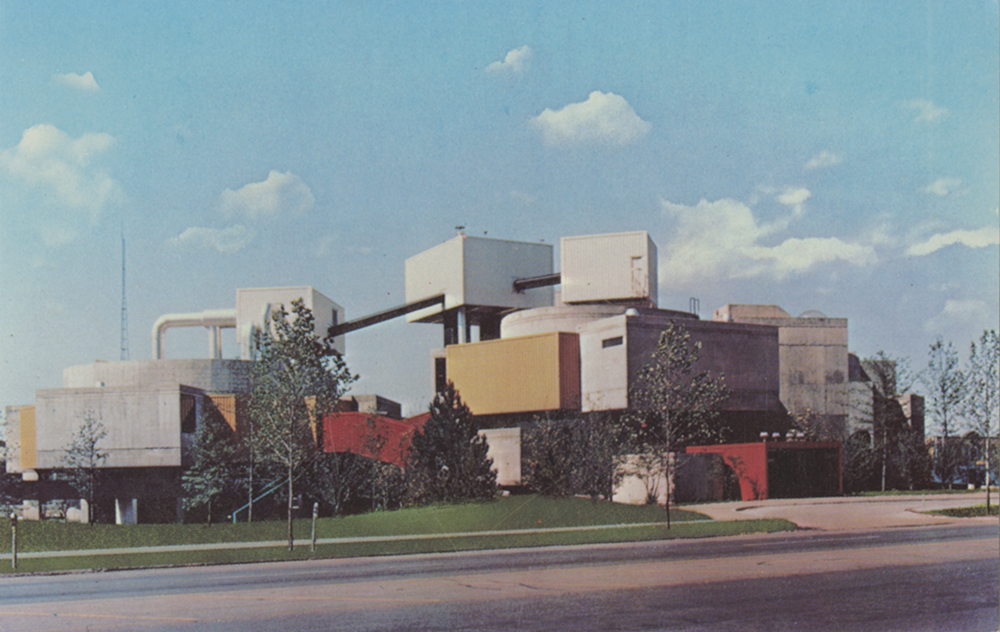 This is the site of the ultramodern Mummers Theater which was considered the pacesetter for the dramatic changes and impressive upgrades city leaders hoped urban renewal would bring to downtown Oklahoma City. The ill-fated project met with controversy before the first shovel of dirt was turned in 1967 and would remain so until its demolition in 2014. 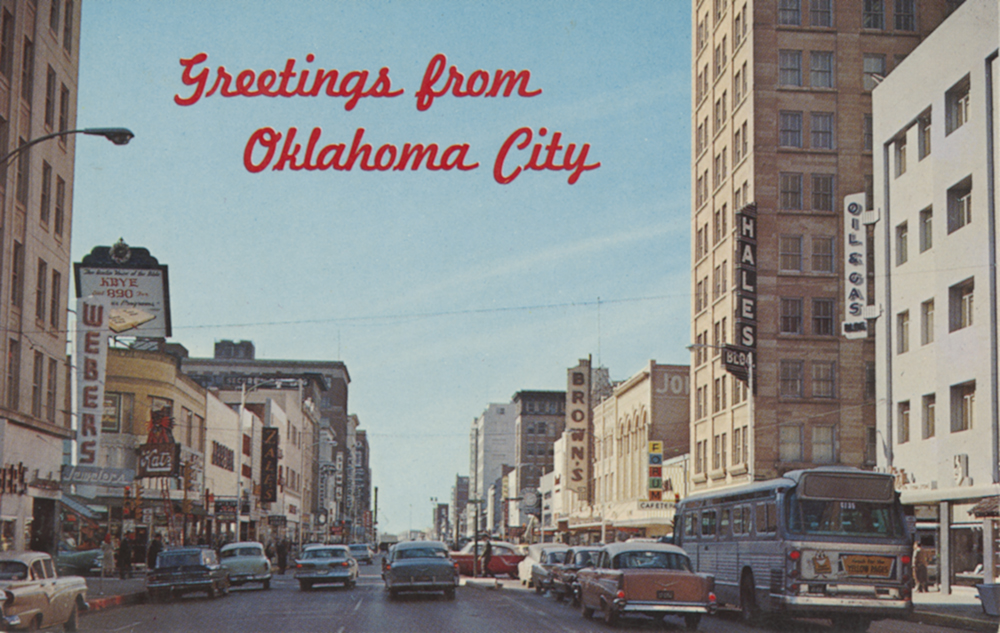 Main Street was the retail core of OKC for the first 75 years of its history. The stretch between Robinson and Hudson featured the three major department stores Brown's, Kerr's, Halliburton's and at it's height in the 1950s, an observer quipped that on Main Street, "You can buy anything but a car or a boat."TOUR GOERS MAY WISH TO REACH STOP #3 BY WALKING EAST FROM HUDSON THROUGH THE DEVON ENERGY GARAGE TO HARVEY IN ORDER TO GET A FEEL FOR WHERE THE RETAIL CORE WAS LOCATED.

The John A Brown department store was an OKC retail institution. Brown's occupied a single three-story building on Main in 1908 and eventually spread weblike into neighboring buildings along Main and Park Aves between Robinson and Harvey. Known for its wide array of merchandise from all over the globe in a medium price point, Brown's was the most beloved and successful retail enterprise in the state. 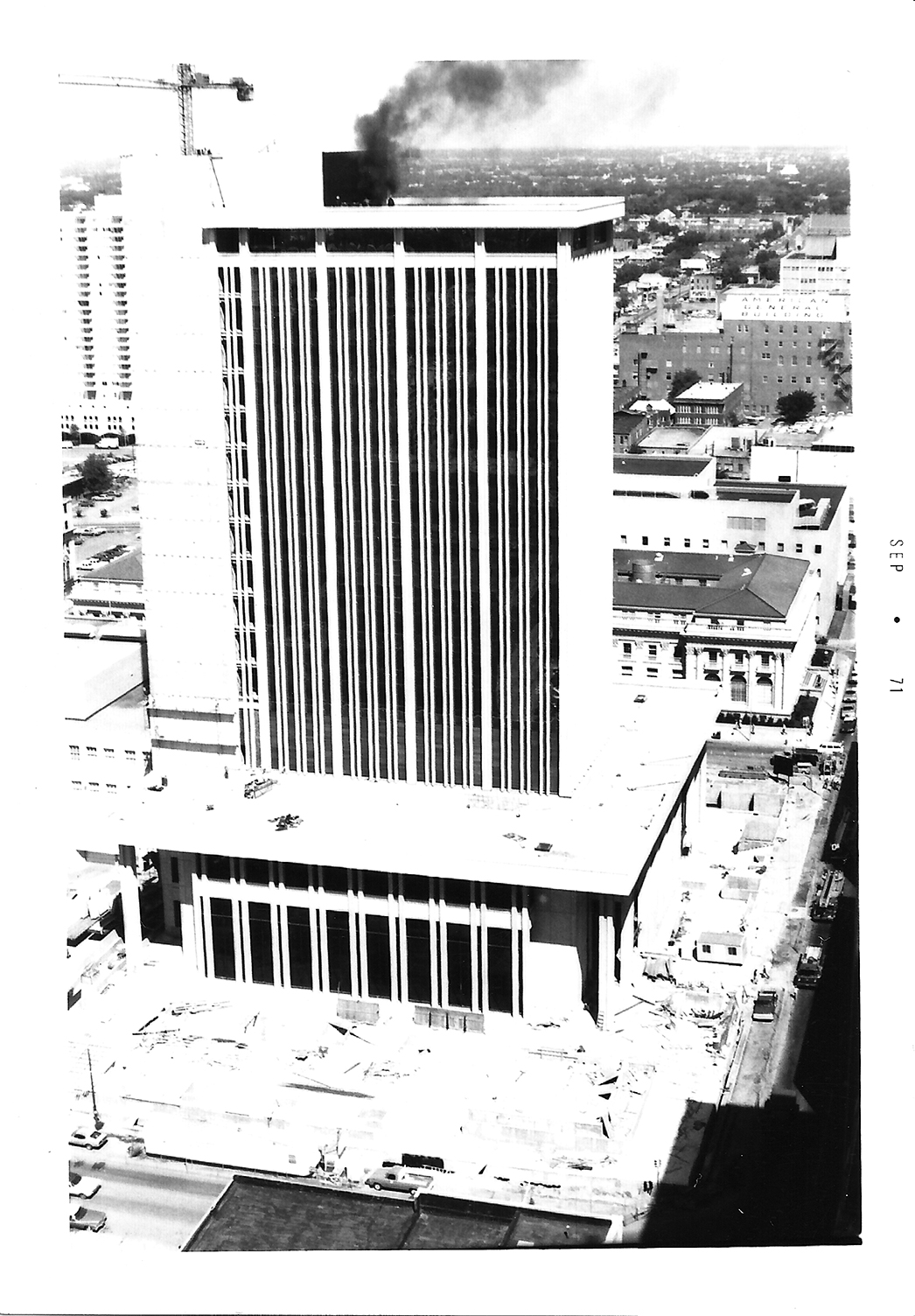 This site was one of the "limited site" developments during urban renewal that aided development by a specific private client, in this case Fidelity Bank. The bank had previously occupied the Baum Building and then today's Park-Harvey Tower. The building site was cleared in 1968 and the 14-story tower was completed in early 1972. 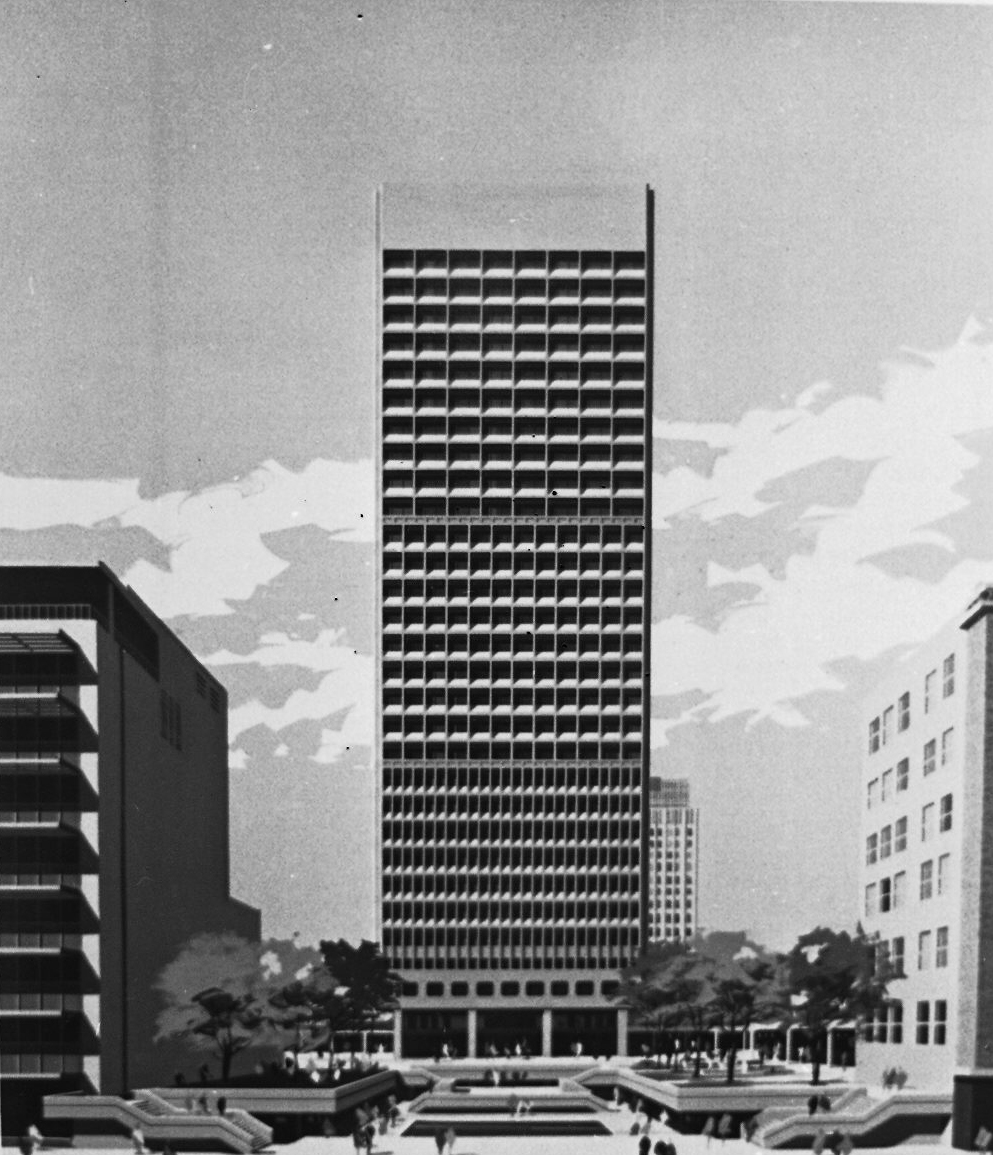 This block was part of what was called a "limited site" development, where land was cleared for a development by a specific client. In general low-density buildings and surface parking lots were cleared to make way for larger structures for corporate entities during urban renewal. Critics of this expansion of eminent domain powers called these limited sites " the second land run," referring to the federal government's giving free land to the original settlers of the city in 1889. 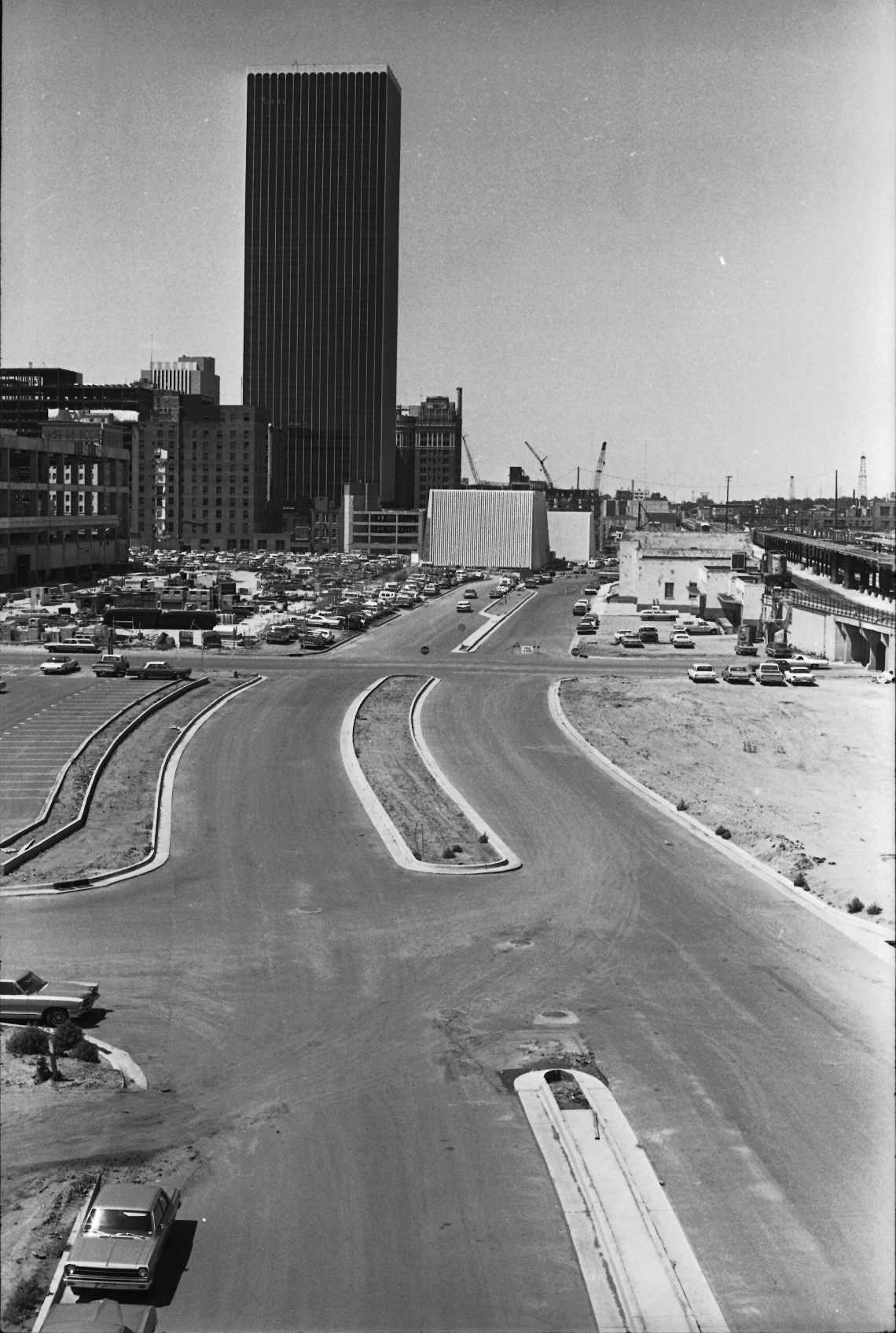 Long the main north-south access into and through Downtown, Broadway was severed by the placement of the new convention center during urban renewal. So a large boulevard capable of high traffic loads was created, veering off of Broadway and carrying cars directly to the big new public garages and the convention center. 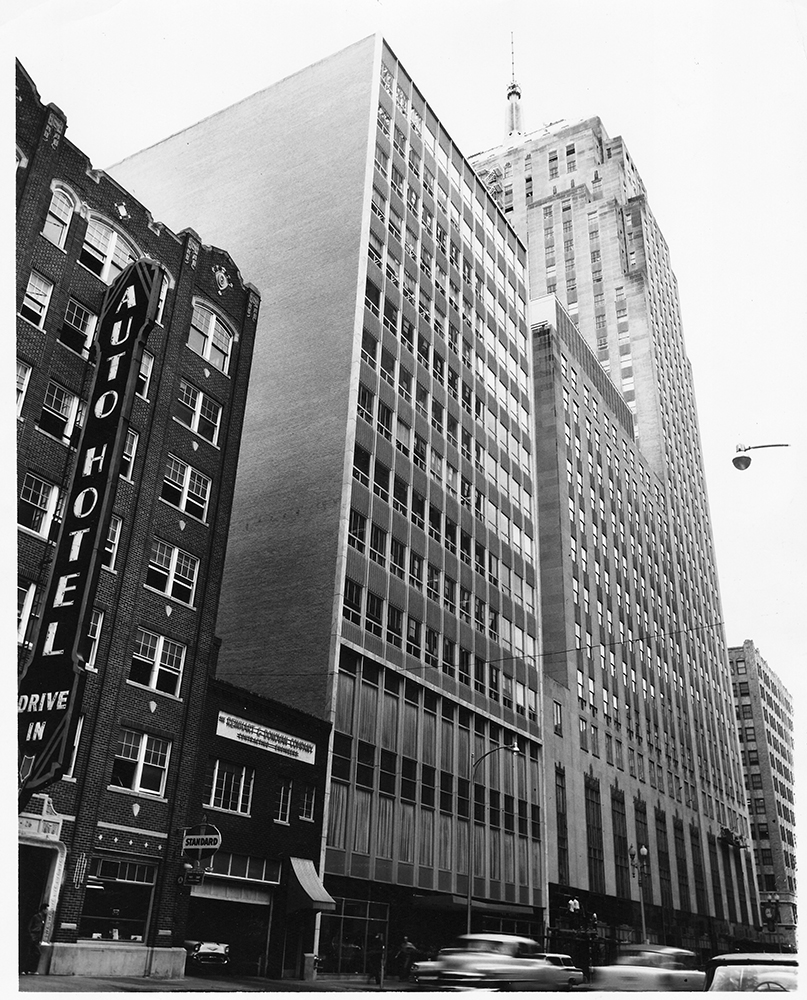 The development of First National Center in 1970 provides an example of what the city could have looked like if hundreds of buildings had not been razed to create the blank canvasses for new development. Essentially encompassing a whole city block, FNC developed as First Natl Bank purchased urban renewal lots for expansion. 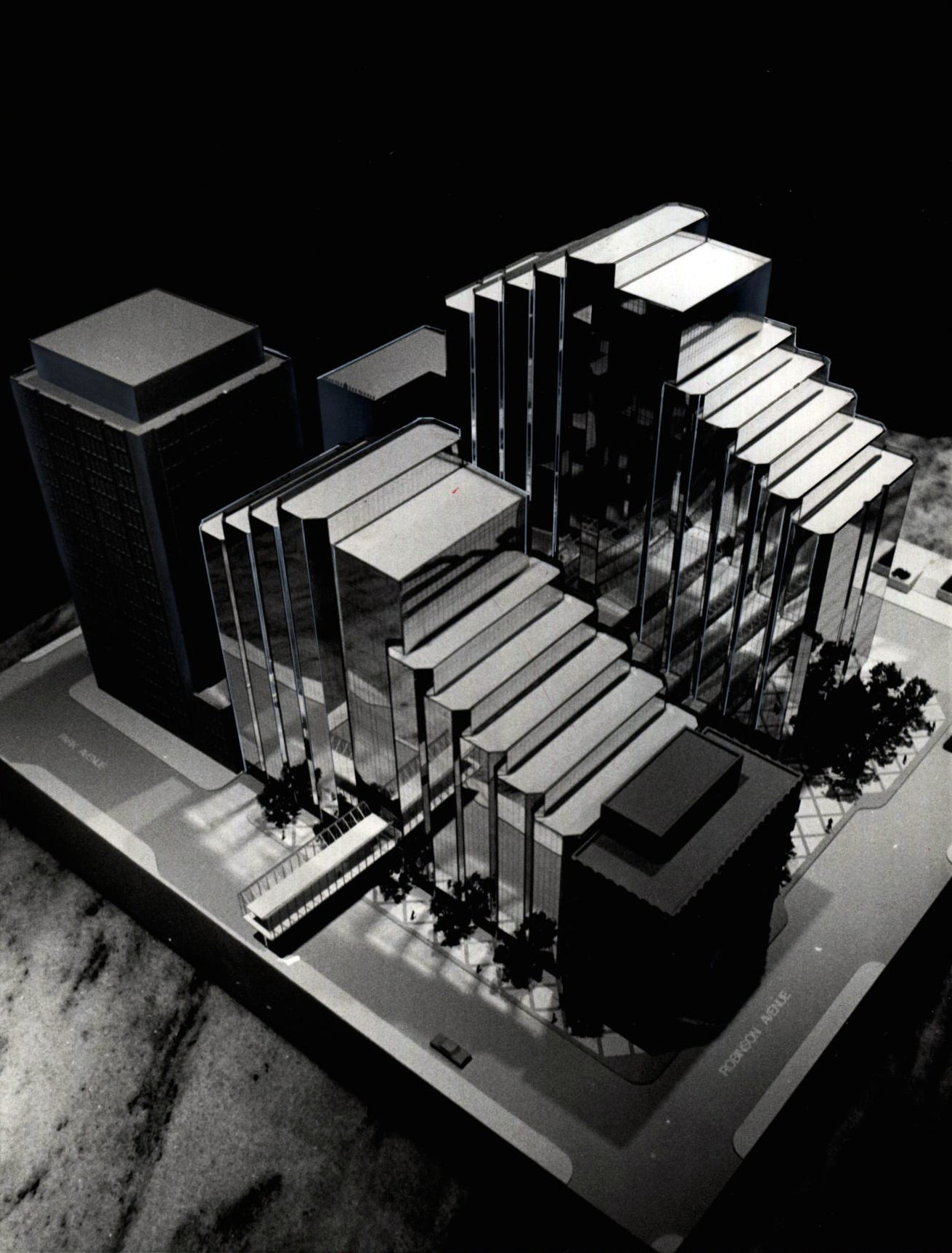 Leadership Square was the last true urban renewal building project, starting just as Oklahoma Tower was wrapping up. Completion of Leadership Square in 1984 came just as the local recession from the oil bust was setting in, effectively ending hopes for development of the Galleria - the last unfulfilled major project of the Pei Plan. 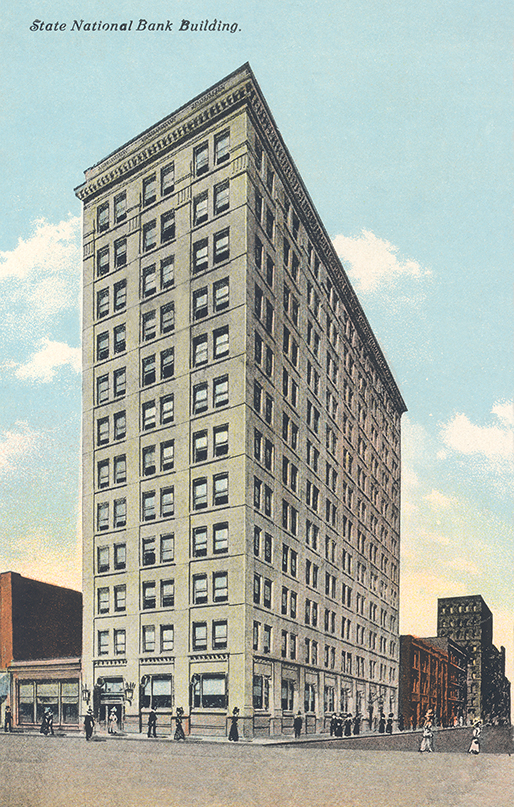 At 12 stories, the State National Bank Building was one of the first big buildings on the Main Street retail corridor. It was constructed at the same time as the Colcord and Baum Buildings one block south in 1910 and this spurt of skyscraping brought a deep sense of pride and progress in the still-young city. In 1931, the building was sold to the very wealthy W T Hales, who had made his fortune in trading mules and horses.

Nearly everyone with an opinion on urban renewal has that one building they point to as a tragic loss. For older longtime residents with an emotional connection to the old city, that is usually the Biltmore Hotel. For newer or younger residents, it's usually the Criterion Theater. The Criterion opened in 1921 as a silent film cinema but screened the first talkie in OKC in 1928. 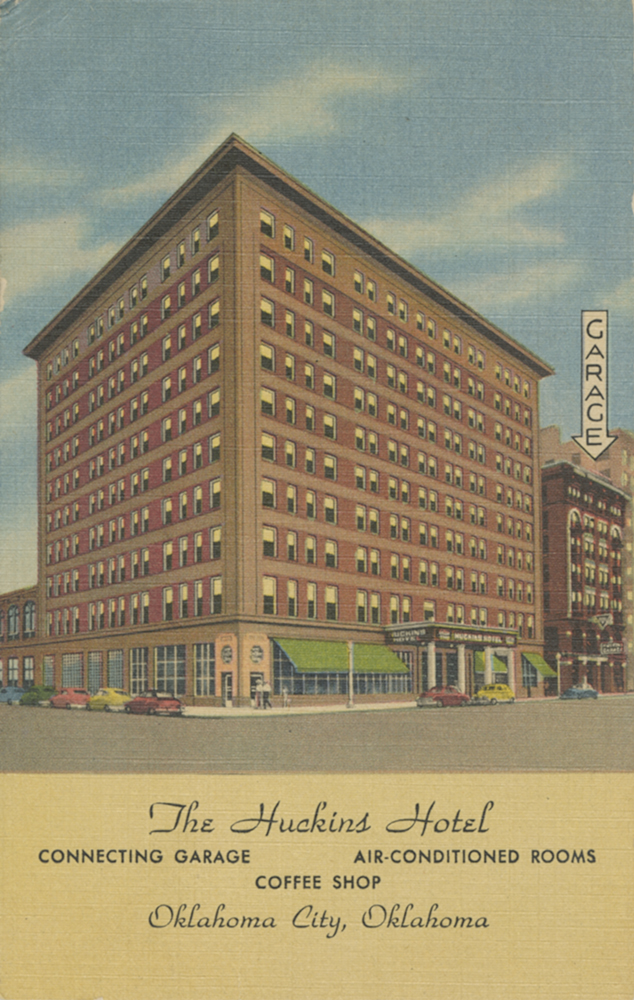 Many architectural gems fell during the urban renewal program, but in terms of historical importance, the Huckins Hotel was probably the biggest loss. Built in 1908 at the corner of Broadway and Main, the very nexus of Downtown, the Huckins featured in more than its share of historical events. It served as the temporary state capitol, a rallying point, and a smoke-filled room of local politics. The Huckins became the first urban renewal building imploded by explosives in July, 1971. 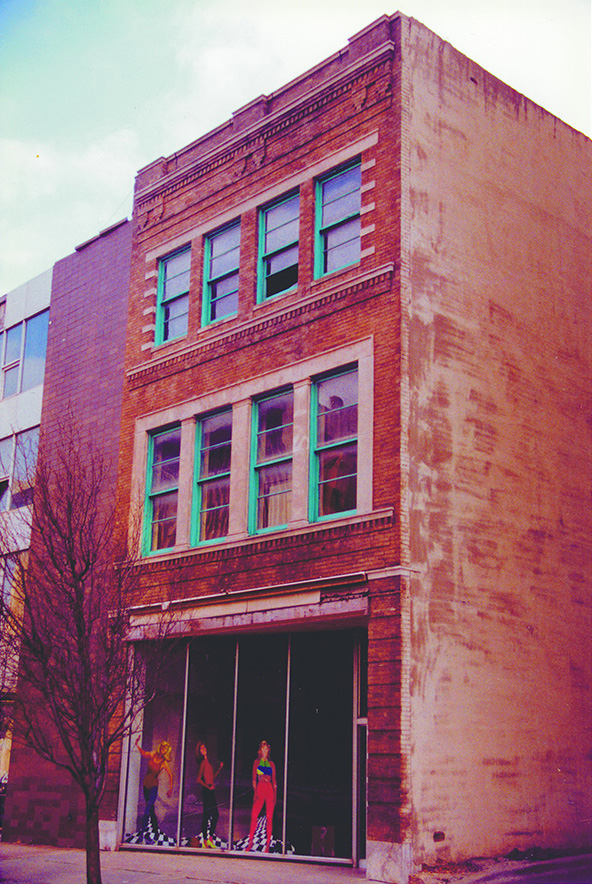 Among all the opposition during the fifteen year period of urban renewal, Howard Melton was the most successful; and even his fight ended in defeat. Melton began his battle in 1971 by delaying the demolition of the neighboring Huckins Hotel in court. Later he brought suit against the Urban Renewal Authority arguing that using the power of the state to transfer property to a private third party via eminent domain was illegal. Melton was successful in delaying the demolition of his building but in 1982 the courts decided that his building must go. Even so, it was not demolished until 1998 when the Renaissance Hotel was built. 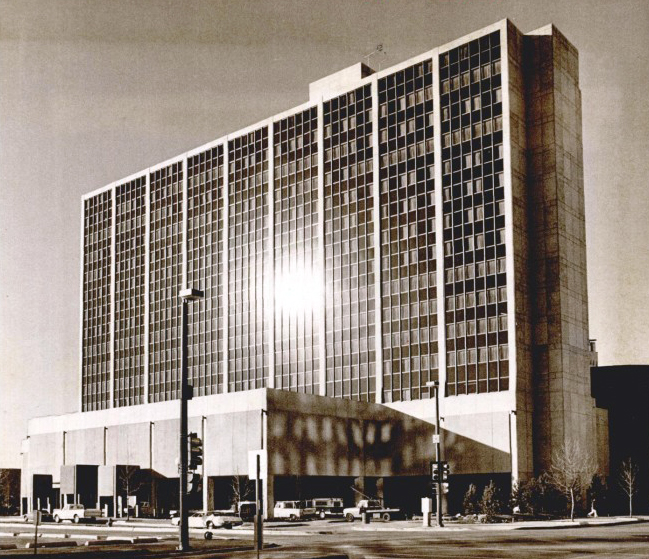 Called "the unit block" because of its low-numbered addresses, this part of Broadway was one of the most dense parts of the city from the earliest settlement. The first tall buildings were built here, like the Culbertson and Herskowitz Buildings, and there were a number of hotels in the area like the Roberts and the Huckins.

Businessmen had been promoting OKC as the ideal convention city virtually since its earliest days, hoping to capitalize on the city's central geographic location. Proposals for newer, bigger, better convention centers have always had messianic tones as it was assumed they would bring salvation in the form of an all-boats-rise economic engine. The dream was elusive, though, until urban renewal brought the promise that a convention center would become a reality. A large convention center was the big selling point for the entire urban renewal program. Even before the Pei Plan was drafted in 1964, the city held a bond election in 1962 to provide several million dollars for a new convention facility. 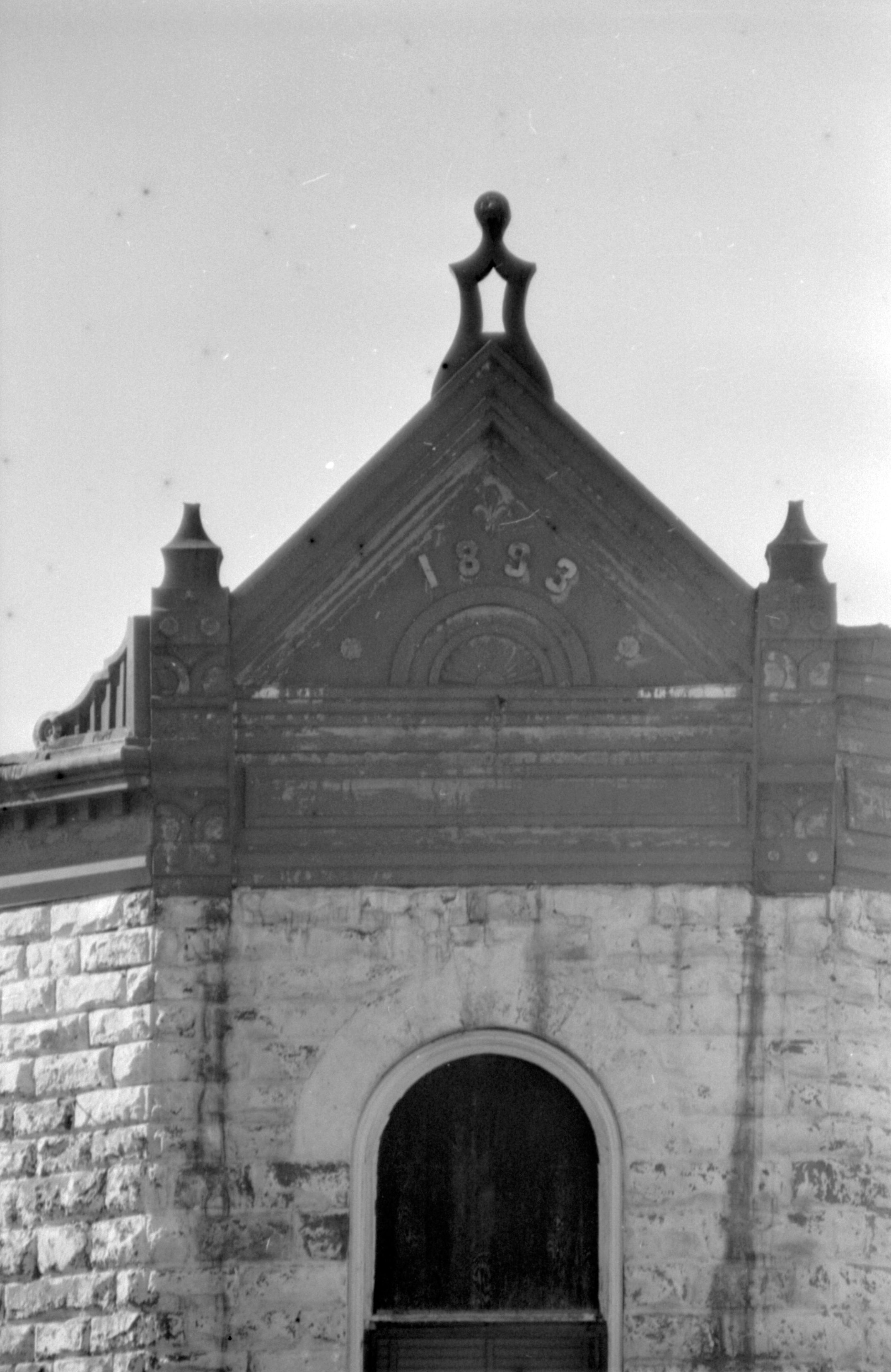 This area could be considered the cradle of Oklahoma City as it was nearest to the Santa Fe railroad station that brought the settlers in during the Land Run in 1889. The clearance of the convention center site included some of the oldest buildings in the city like the Buckhorn Saloon (1893) which historians at the time determined was the oldest building in the Downtown area and represented the last connection to the vice-ridden area known as Hell's Half Acre. Still, a newspaper editorial opined that, "Only the adventurous would miss the pawn shops, seedy hotels and pioneer Buckhorn Saloon." 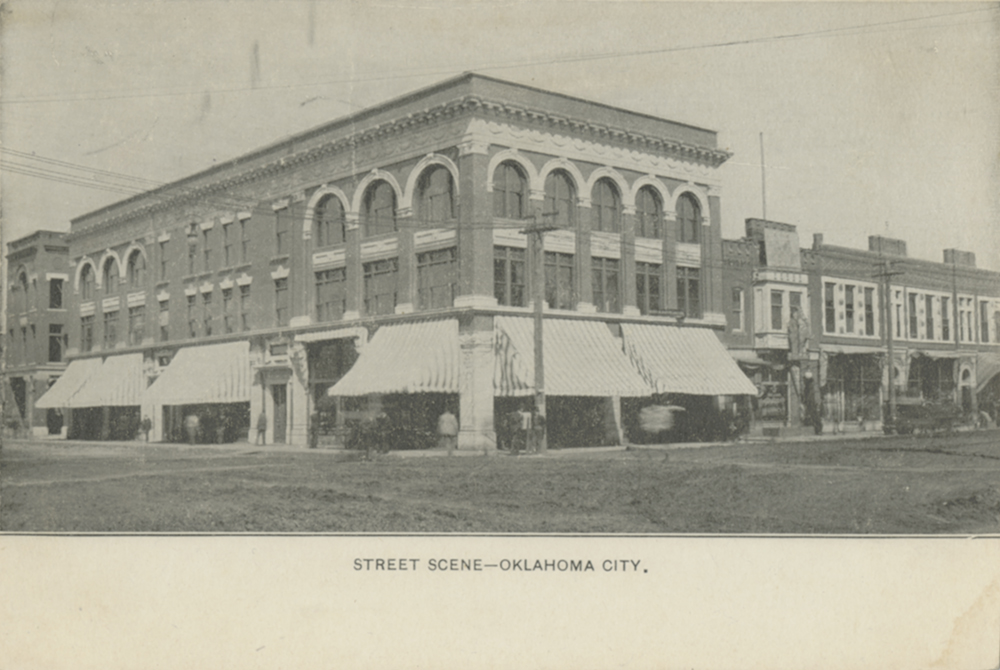 The construction of the 3-story building on the northwest corner of Sheridan and Broadway in 1903 was a result of one of the first bond issues for the city and was widely seen as a sign that OKC had matured from town to city. This building served as the seat of municipal government until the current Municipal Building was built in 1937. 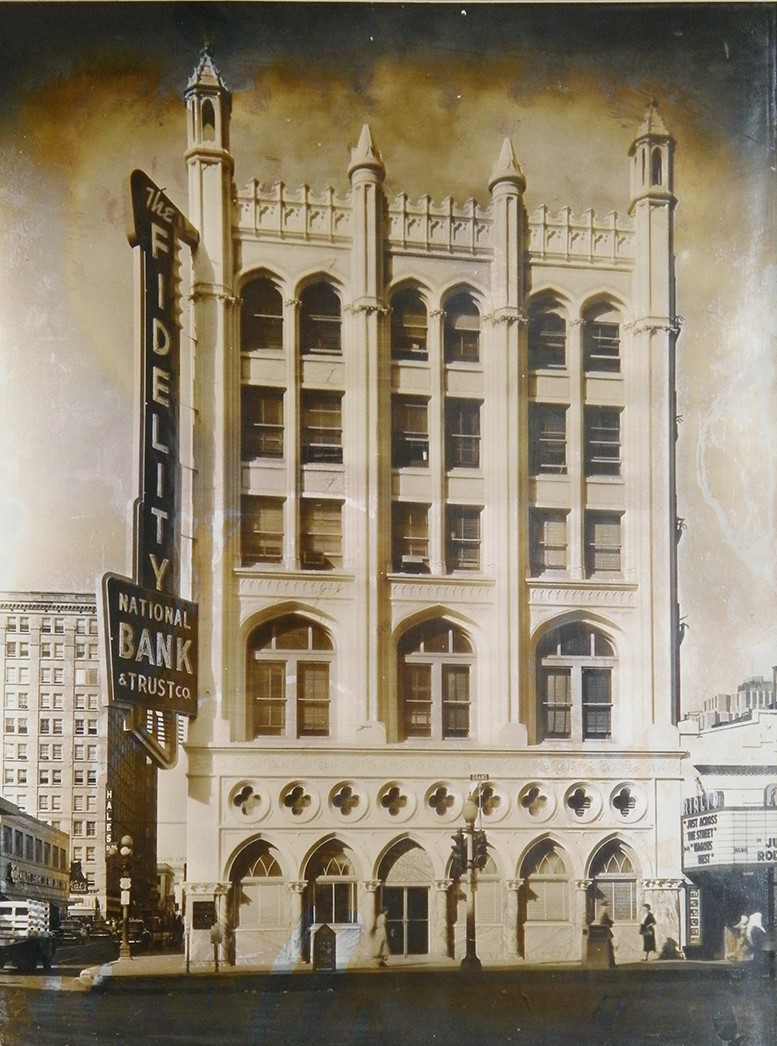 The Baum Building was quite possibly the most ornate ever to stand in Oklahoma City. Modeled on the Doge's Palace in Venice, this five story Solomon Layton-designed structure was part of the first wave of tall buildings on Robinson Ave. One of goals of urban renewal was the widening of the principal streets Downtown. On Robinson, that meant the Baum had to go in the name of progress. 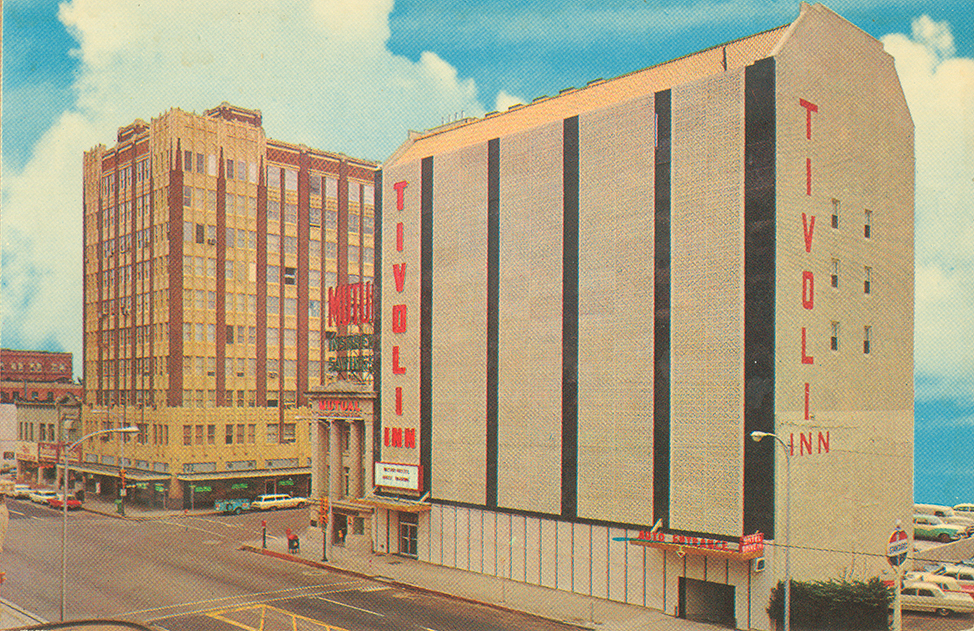 This eight-story building was built in 1923 as the clubhouse for the Oklahoma Club, a men's social club modeled on the gentlemen's clubs of the Victorian era. Lower floors were dining and club rooms and the upper four floors were dormitory rooms for the city's elite, like club president John W. Shartel. The Chamber of Commerce officed in the basement for a years as well. 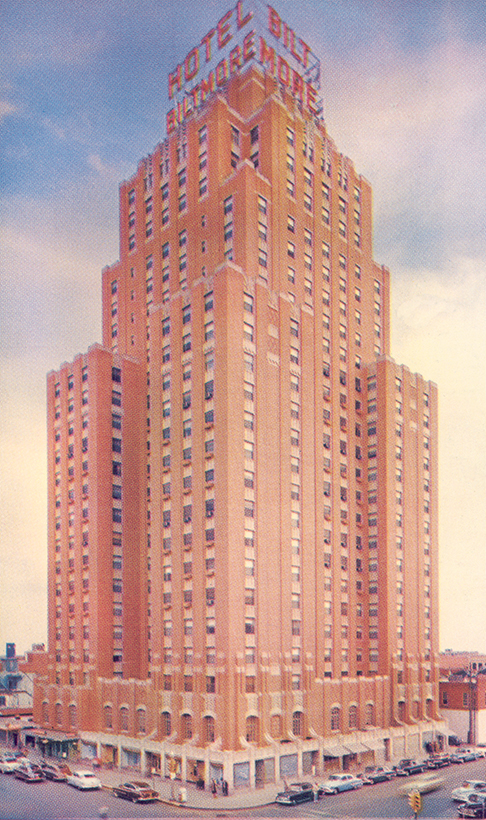 The Biltmore Hotel rose during the skyscraper boom of the early 1930s. Following such luminaries as First National, Ramsey Tower and the Petroleum Building, the 600-room Biltmore was 26 stories when completed in 1932 on Grand Ave, two blocks west of the main concentration of hotels on Broadway.The art deco Biltmore was the site of many now-legendary events in the city and a crowd of 30,000 Oklahoma Citians came Downtown to wish the old hotel a fond farewell on Sunday, Oct 19, 1977. The next to last major building to fall, the Biltmore was the largest steel structure ever demolished at the time. 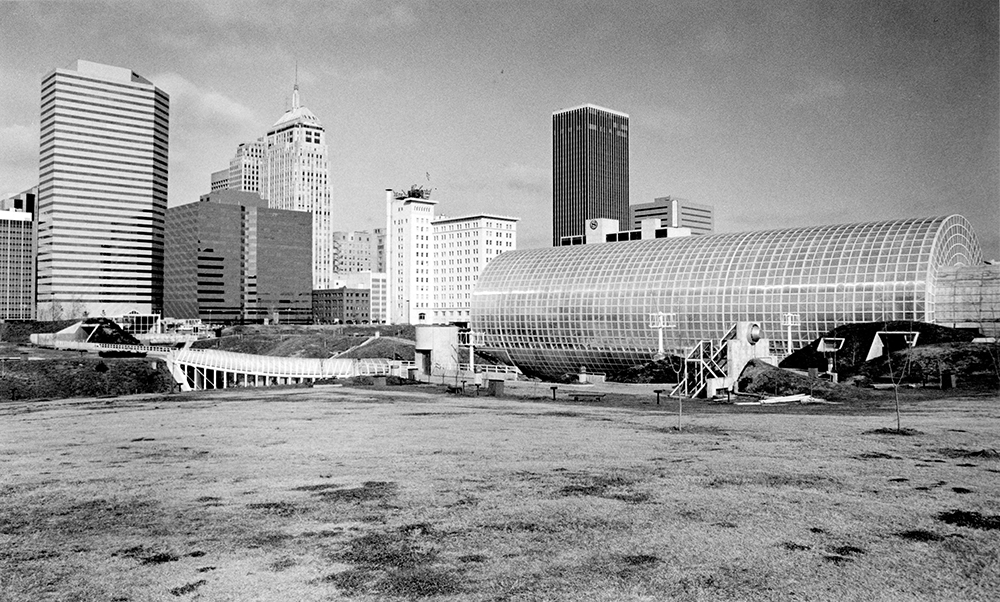 The development of the Myriad Botanical Gardens and the Crystal Bridge deserves its own chapter in the story of urban renewal in Oklahoma City. This grand project was the hallmark of the Pei Plan, intended to be both the playground of the thousands of Downtown residents who would flock to the area and a draw for the tourists and conventioneers visiting town. 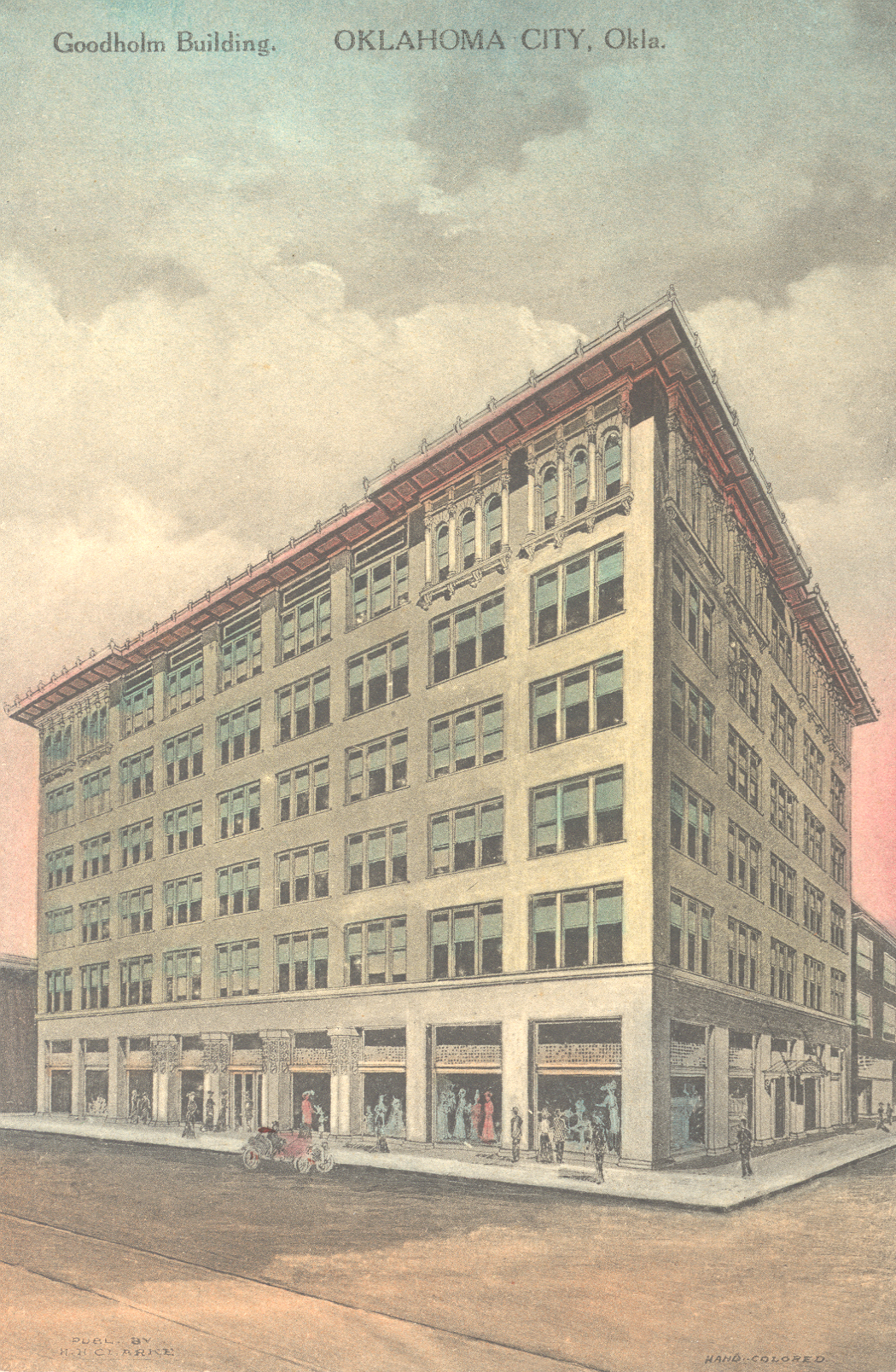 Known as the Sooner Building at the end of its life, this structure was originally the Goodholm Building, named for its developer Andrew Goodholm. In 1910 it became Miller Bros. Dept. Store and in 1916 the Grain Exchange where state crops were brought to market. Its most notable client, though, was Sears-Roebuck Dept Store which opened their first OKC store here in 1929, remaining until 1954.The remainder of the block from Sheridan to California, Harvey to Hudson consisted of low-rise retail, rooming houses and surface parking lots.This building was part of the Myriad Gardens "superblock" and was left out of demolition plans initially, eventually falling in 1973. 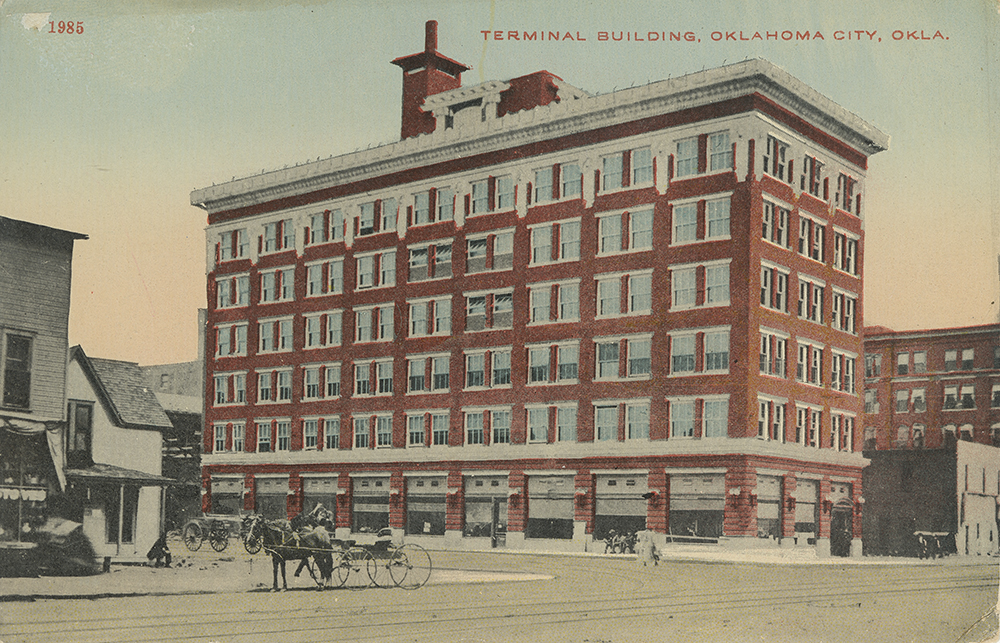 The Globe Life Building began its life as the Terminal Building in 1910. Despite the ominous name, this building was the headquarters and offices for the Oklahoma Railway Co. which operated the city's streetcar lines under the leadership of Anton Classen and John Shartel. The ground floor contained the offices of The Classen Co. real estate firm and the second floor the law offices of Shartel and Wells. The actual streetcar terminal was attached to the west side of the building and was the central point of all streetcar routes in the city. The Globe Life Building was demolished in June 1975. 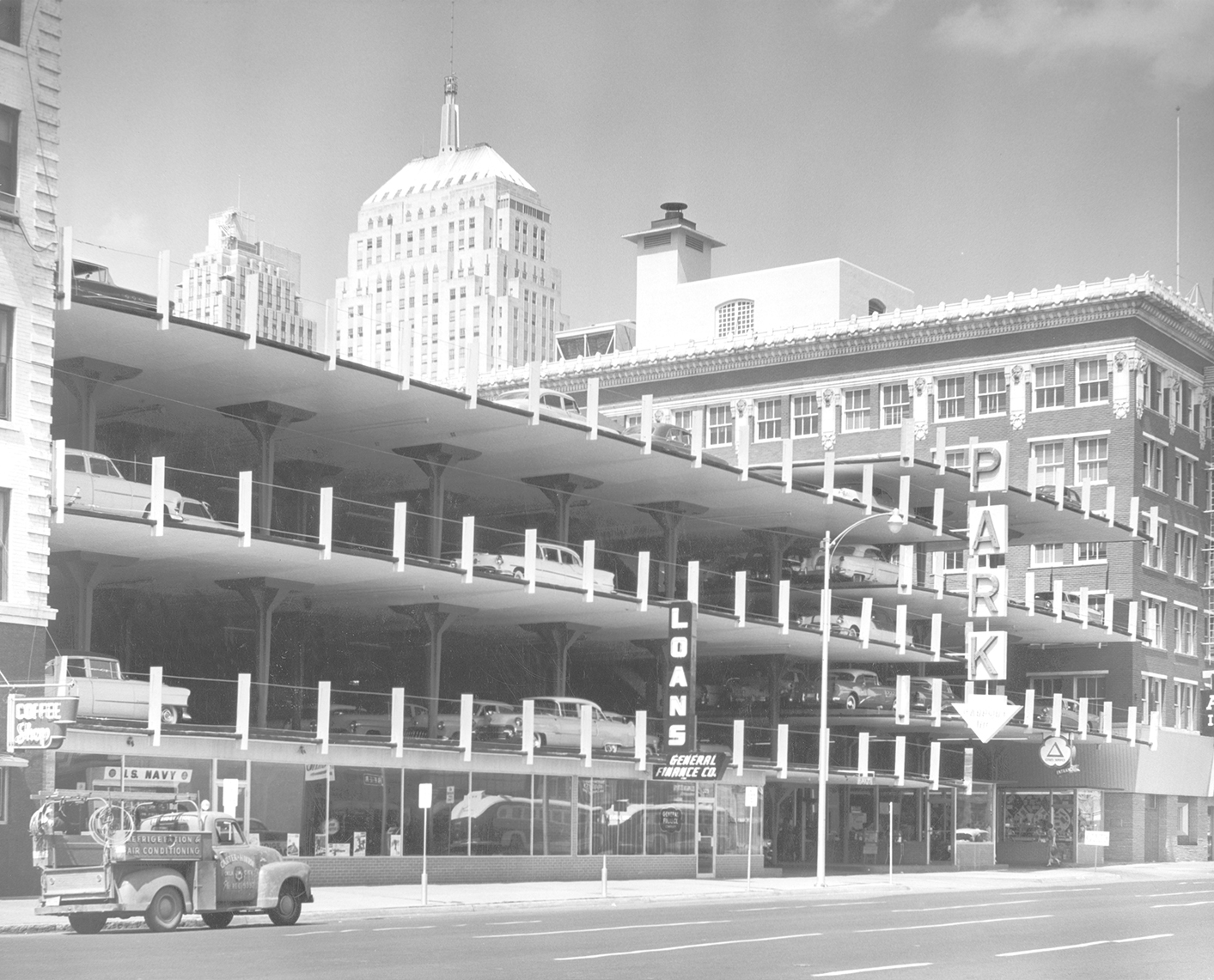 This location was once the site of the large streetcar terminal station which provided covered loading and unloading for riders in and out of Downtown. It converted to surface parking in the 1940s and a parking structure in 1954. The parking garage was demolished in 1975 as part of the clearance of the superblock for the Galleria shopping complex.

Welcome to the Metro Library's walking tour of Downtown OKC urban renewal sites. Please enjoy this tour safely, following normal precautions when walking around the city - keep an eye out for traffic and always maintain an awareness of your surroundings. Myth and controversy surround the urban renewal era and hopefully after completing this tour you will have a clear understanding of the era of the 1960s and 1970s in Downtown OKC. It's important to note that even though the period covered in this tour is called the urban renewal era, OKC has undertaken some form of major urban renewal roughly every 30 years since statehood. Renewal programs in cities nationwide made use of federal housing money and an expansion of the powers of eminent domain from the courts to clear blighted areas in urban cores. Despite its young age, OKC had definite problems caused by rapid growth and uncontrolled postwar urban sprawl. In the late 1950s civic and business leaders began the process of planning urban renewal culminating in the selection of noted architect I. M. Pei as the master planner. We commonly use the term "Pei Plan" as an umbrella term but there were actually a series of projects and plans in many parts of the city between 1964 and 1966. For the purposes of this tour, we will use the term Pei Plan and the 1964 date for convenience. The Downtown portion of the Pei Plan was somewhat ominously called Project 1-A. It was administered by the Urban Renewal Authority and called for a near-total transformation of Downtown OKC stretching from Shartel to the Santa Fe tracks and NW 6 to SW 3.