A National Historic Landmark, Brandywine Battlefield Park is the site of the largest land battle of the Revolutionary War. The battle took place for eleven hours on September 11, 1777-the longest single-day battle in the war. In the days leading up to the battle Howe's men had advanced through the Chesapeake and landed at Elk, Maryland with his sight set upon the new nation's capital of Philadelphia. General George Washington anticipated this move and was determined to stop Howe from reaching Philadelphia. However, the British anticipated Washington's plan and were able to overwhelm his flank and force the Americans from the field. Fortunately for the Americans, the valiant fight at Brandywine left the British army unable to pursue Washington's army and the British settled for Philadelphia as their prize. Despite the loss of their capital, the American army was still in the field and Washington and his fellow officers and men continued the war. The 52 acres that have been preserved are the location where Washington's Continental Army camped and prepared for the British offensive. The park offers many programs and tours, including Washington's Headquarters, a tour through the park museum, and a film about the battle and its significance within the larger war. The park also offers driving tours that highlight how the battle unfolded.

The battle resulted in a victory for British General Howe's army and cleared the path for his men to capture Philadelphia despite Washington's original optimism that his men could stop Howe's army and turn them away from the rebel capital. 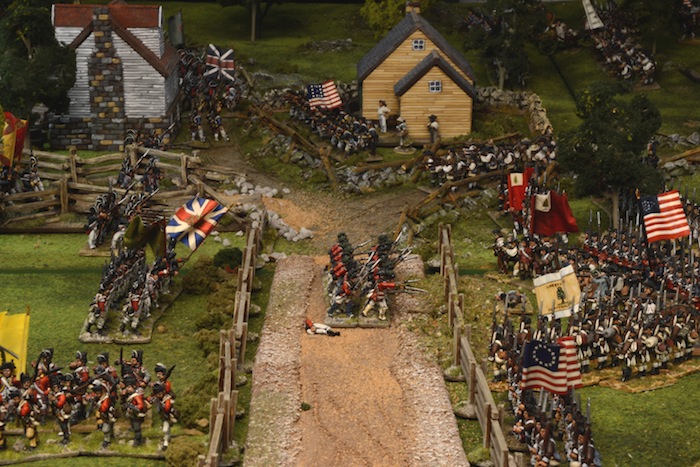 This house served as Washington's headquarters during the battle. 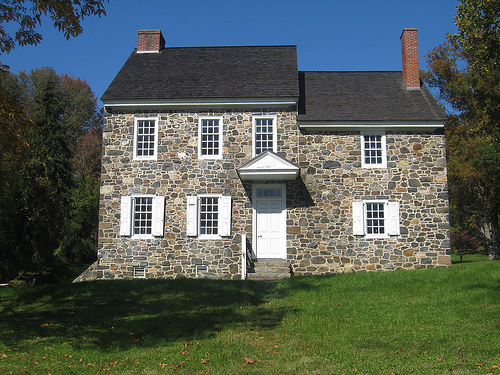 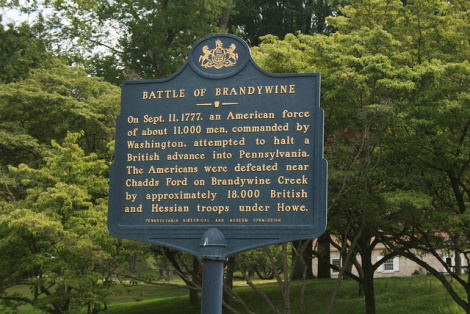 This map depicts the movements of the American and British forces. Red dashed lines show how the British were able to flank the American right by crossing the river just to the north (Washington was unaware of this ford).

The goal of British General Howe was to take Philadelphia, the location of the rebel government. In General Howe's mind, the success of this strategy would effectively put an end to the war. Howe approached from the Chesapeake, landing at Elk, Maryland, and marched his army toward Philadelphia.

General George Washington anticipated this move and was determined and confident that he and his troops could stop the British. General Washington chose the high ground of Chadd's Ford which also allowed men arriving from Baltimore and Philadelphia to cross the Brandywine River safely. As a result, Washington was able to choose his staging point and the place where his army would engage the British.

On the morning of September 9, 1777, Washington placed his troops strategically along the Brandywine River at all possible crossings. By placing his troops at the northernmost and southernmost fords of the river, Washington was hoping to force a battle at Chadd's Ford. A battle here would be strategically advantageous because they his men held the high ground.  The closest unguarded ford was twelve miles upriver, so General Washington felt well prepared.

On September 11, 1777, the morning broke with a heavy, dense fog. The fog was so thick, that the movements of the approaching British forces were completely hidden. Washington began receiving reports that morning warning that General Howe had split his forces. However, other reports began trickling in that negated the previous reports. General Washington came to the mistaken conclusion that the entire British force was converging on Chadd's Ford, just as he had planned.

However, the reality of the situation was quite different. The British had crossed the river, marched south, and had taken up the position of their choosing near Birmingham Friends Meeting House.  Washington was shocked when the British appeared on his right flank and ordered his troops to take and control the high ground around Birmingham Friends Meeting House. The Continentals were unable to carry out Washington's order despite a valiant effort in a battle that ended when it became too dark to continue. The Americans pulled back and the British were too exhausted to give chase. As a result, the British controlled the field and had a route to take Philadelphia and other cities, but the American rebel army had not been defeated and would continue the war despite the loss of Philadelphia to the British on September 26th.

"History of the Battle of the Brandywine." Independence Hall Association. Accessed June 1, 2015. http://www.ushistory.org/brandywine/index.htm.

Hours are generally from 9-4pm but vary throughout the year. Check website for information.