The Battle of Brandywine, which took place on September 11, 1777, was a major engagement during the American Revolutionary War. The Continental Army, under General George Washington, attempted to stop the British advance on Philadelphia. The Continental Congress was stationed there, which made it a prime target and the British thought they could end the war by capturing it. The British were marching from the Chesapeake under the command of General William Howe. Washington's main force was stationed at Chad's Forde halfway to Philadelphia. As the battle unfolded, the American's were flanked by Howe which broke the stalemate that appeared be taking place. The British won the battle and the road to Philadelphia was wide open. However, it was not a total victory as the majority of Washington's forces were able to escape.

Marker marking the location of the Battle 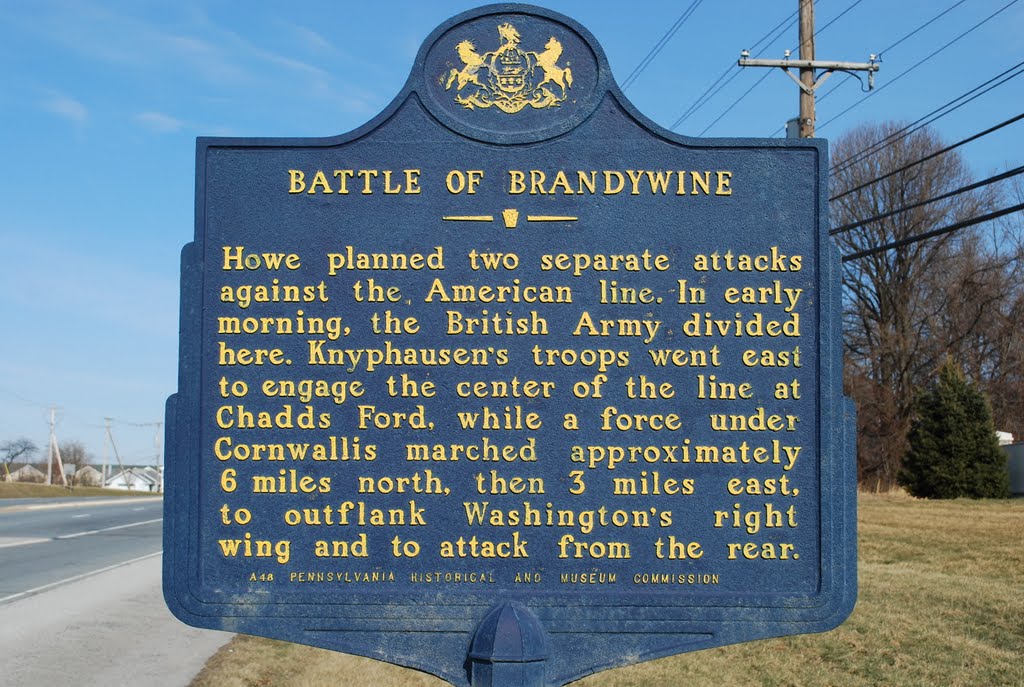 Map showing the layout of the battle. 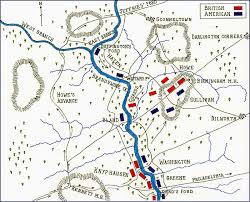 During August 1777, the war was not looking promising for the Continentals. The north was being attacked by an entire British army. General Howe's plan to capture Philadelphia would likely have ended the war since with the Continental Congress was there. Howe's army landed in the Chesapeake area on August 25, 1777 to begin their march to Philadelphia. Washington, knowing that he needed to stop the British advancement, prepared a defense in an area called Chadds Ford. Washington was confident that he would be able to stop the British advancement. However Howe had a different idea and the commanders strategies would come into play.

When Howe realized the defense that Washington was using he came up with a plan of his own. Howe was going to flank Washington and avoid a head on confrontation that could have resulted in more deaths. The plan was set to send a small force to engage Washington in front while Howe lead the main force on a march to go around behind Washington and flank him. On September 11 the battle of Brandywine took place throughout the day Washington received reports of Howe attempting to flank his position, however one report convinced him otherwise, which proved fatal. The day long battle appeared to be a stalemate which would work for the Americans because that would mean that the British wouldn't be able to advance. However that all changed when Howe's forces appeared on the flank.

Late in the afternoon Howes main force began to attack Washington, who quickly realized that the battle was now hopeless and would soon need to begin a retreat. Greene and his men was sent in to the battle by Washington to engage the British, however the main objective now was to cover the American army while it retreated to safety. Small skirmishes took place while they retreated allowing them to cover other Americans as they fell back until the action died down in early evening. The battle was a loss for Washington and it opened the road up to Philadelphia for the British, however the British failed in their objective of destroying Washington's army.