The Saratoga Monument commemorates the victory of the American rebels over the British at Saratoga in 1777. The first major American victory, the battle convinced Britain's European rivals that the rebellion could provide an opportunity to wrest control of British possessions in the "New World" which allowed the rebels to secure foreign recognition and assistance. Construction of the Saratoga Monument began in 1877 thanks to local residents who wanted to commemorate the centennial of the British surrender. They formed the Saratoga Monument Association over the next five years, they raised funds and constructed the monument in phases. The monument contains sculptures of some of the most known leaders in American history to commemorate the freedom the unveiled after the war.

The Saratoga monument is located in the National Historic Park in a small village called Victory in eastern New York. 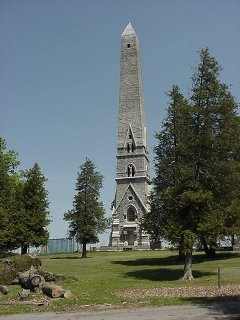 This is the Saratoga Monument under construction in the late 19th century. It took five years for the monument to be completed, from 1877 to 1883. 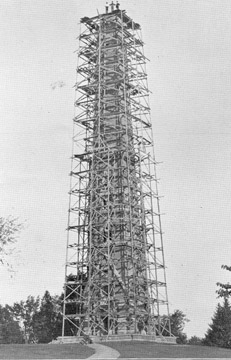 This is a bronze statue of Colonel Daniel Morgan. He played an important part in leading a rebel troop of riflemen alongside General Gates. 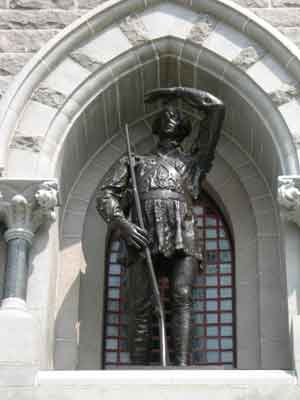 Near the end of the American Revolution the British Army was weakening. They began to retreat to Saratoga. General John Burgoyne of the British surrendered to American General Horatio Gates on October 17, 1777 ending the battles of Saratoga and giving the Americans a key victory. This was a critical turning point in the war; often times considered the biggest turning point in the war beyond the eventual British surrender at Yorktown.

The Saratoga battle monument is located in the small town of Victory, New York. The monument stands 154 ½ feet tall and looks out over the Hudson Valley. The monument was constructed in 1877 after a group of citizens obtained a piece of property suitable for the project. The movement to create the monument started in 1856 by the Saratoga Monument Association. The Civil War halted the building of the monument but it began once more in 1872. They intended to celebrate the centennial of Burgoyne's surrender that occurred in 1777. The lead architect for the monument was Jared C. Markham. His builders were the Booth Brothers of New York City.

On October 17, 1877 the cornerstones were laid for the monument. In 1882 the capstone was places. in 1877 the bronze statues of General Philip Schuyler, Colonel Daniel Morgan, General Horatio Gates, and General Benedict Arnold were finished covering guarding each side of the structure. General Benedict Arnold's statue was later removed due to his later treachery. In 1912, the monument became officially dedicated on the 135th anniversary of Burgoyne's surrender. Finally, in 1980 the monument became a part of the National Park Service.

The Saratoga Monument Association faced funding difficulties throughout the construction of the monument. Donations only accounted for 2.300 dollars. 95,000 dollars came from the Federal government and 10,000 dollars from the state of New York. Following the monuments relocation to New York State a debt of 4,500 dollars still existed. The group intended for the monument to celebrate the victory of the colonists as well as to serve as a reminder to Americans of future generations the importance of the battles and military leaders.