The National Museum of American History is dedicated to the "infinite richness and complexity" of American history. Located on the National Mall, it is one of the most-visited museums in the country. Smithsonian collections of American history date back to the 1840s, and the current museum building opened in 1964 as the Museum of History and Technology. Its name was changed to the National Museum of American History in 1980. The museum's renovation from 2006 to 2008 included the construction of the new Star-Spangled Banner gallery, which holds the original flag that inspired the national anthem. The Museum includes exhibits dedicated to a plethora of topics, including politics and government, civil rights, gender and sexuality, military and war, business and innovation, indigenous Americans, ethnicity and immigration, disability history, religion, and food history.

National Museum of American History as seen from Constitution Avenue. 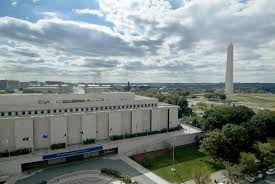 The Museum bears the name of Kenneth Behring, a real estate developer who pledged $80 million to the National Museum of American History in 2000. 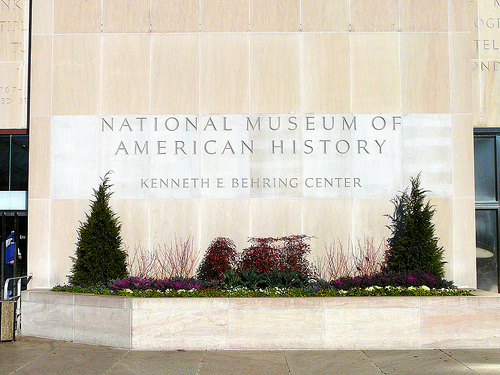 National Museum of American History building incorporates the symmetry and columns of neoclassic architecture while using a sleek and modern design. 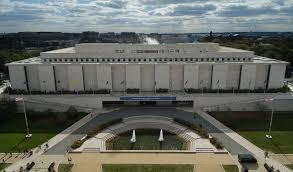 The museum, then named the Museum of History and Technology, under construction in 1962. Photo courtesy of the Smithsonian Institution Archives. 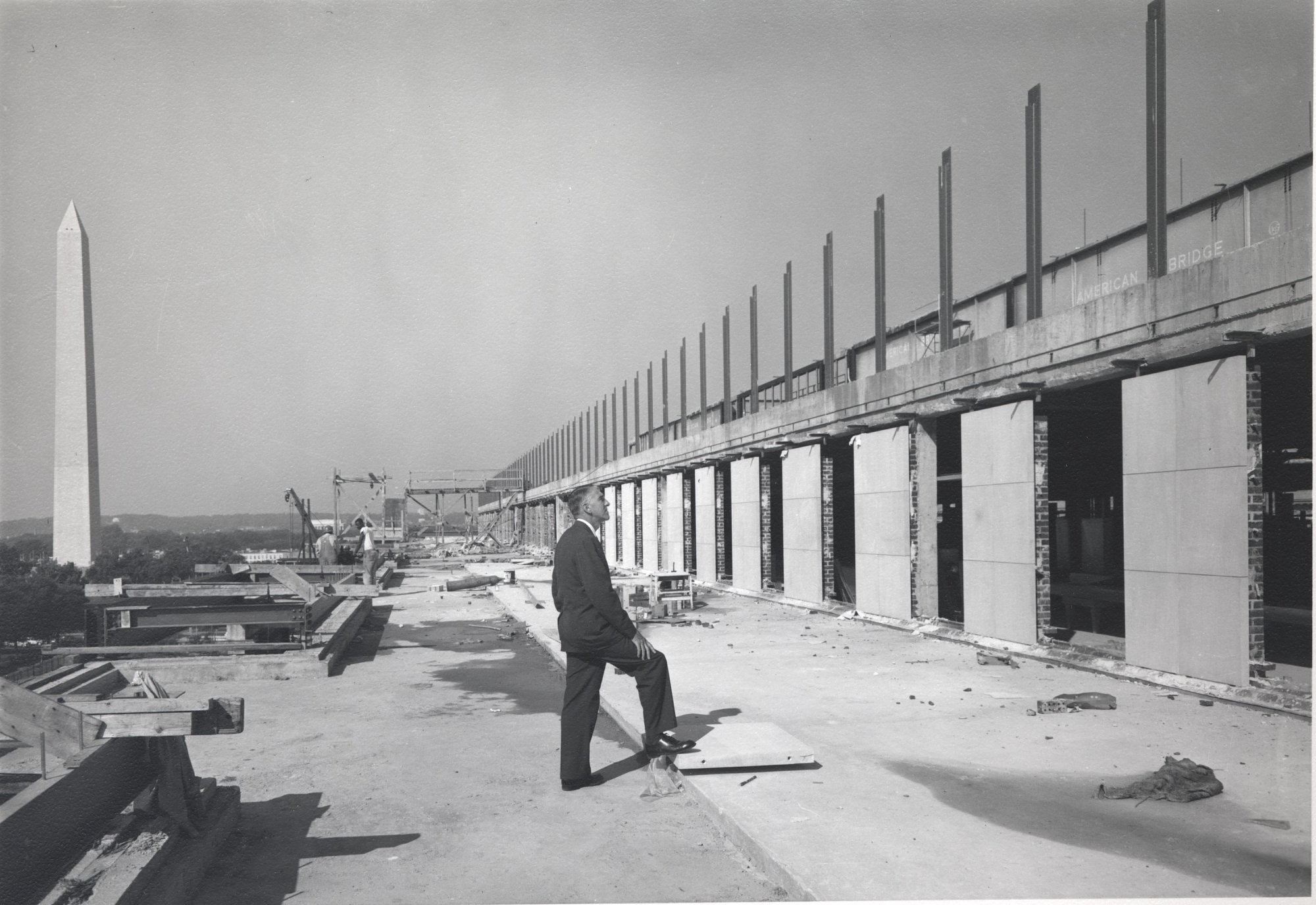 Visitors learn about Horatio Greenough's statue of George Washington at the museum dedication in 1964. Photo courtesy of the Smithsonian Institution Archives. 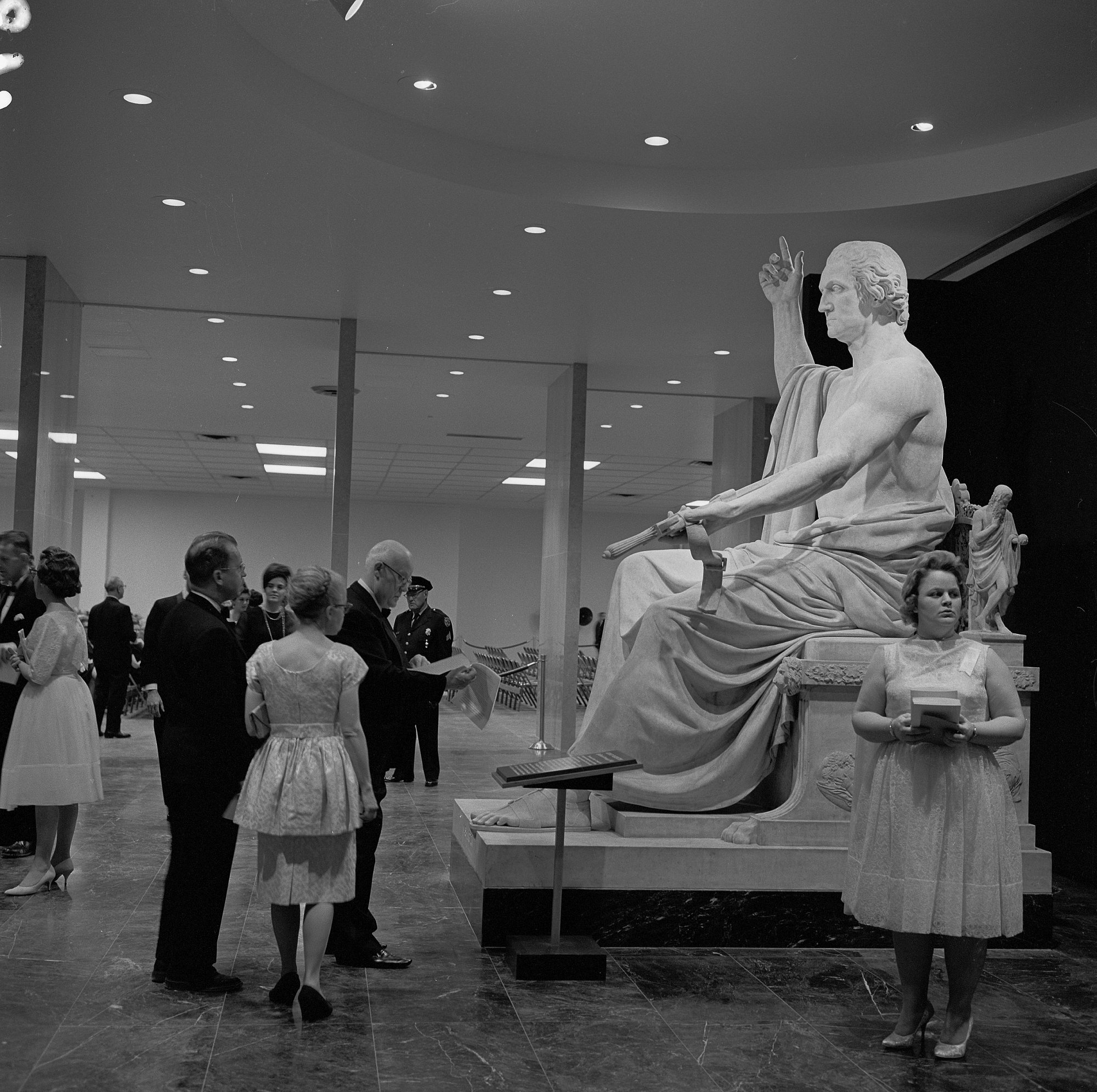 The Museum hosted President Richard Nixon's inaugural ball on January 20, 1969. Honored guests stand at the podium in front of the Star-Spangled Banner. Photo courtesy of the Smithsonian Institution Archives. 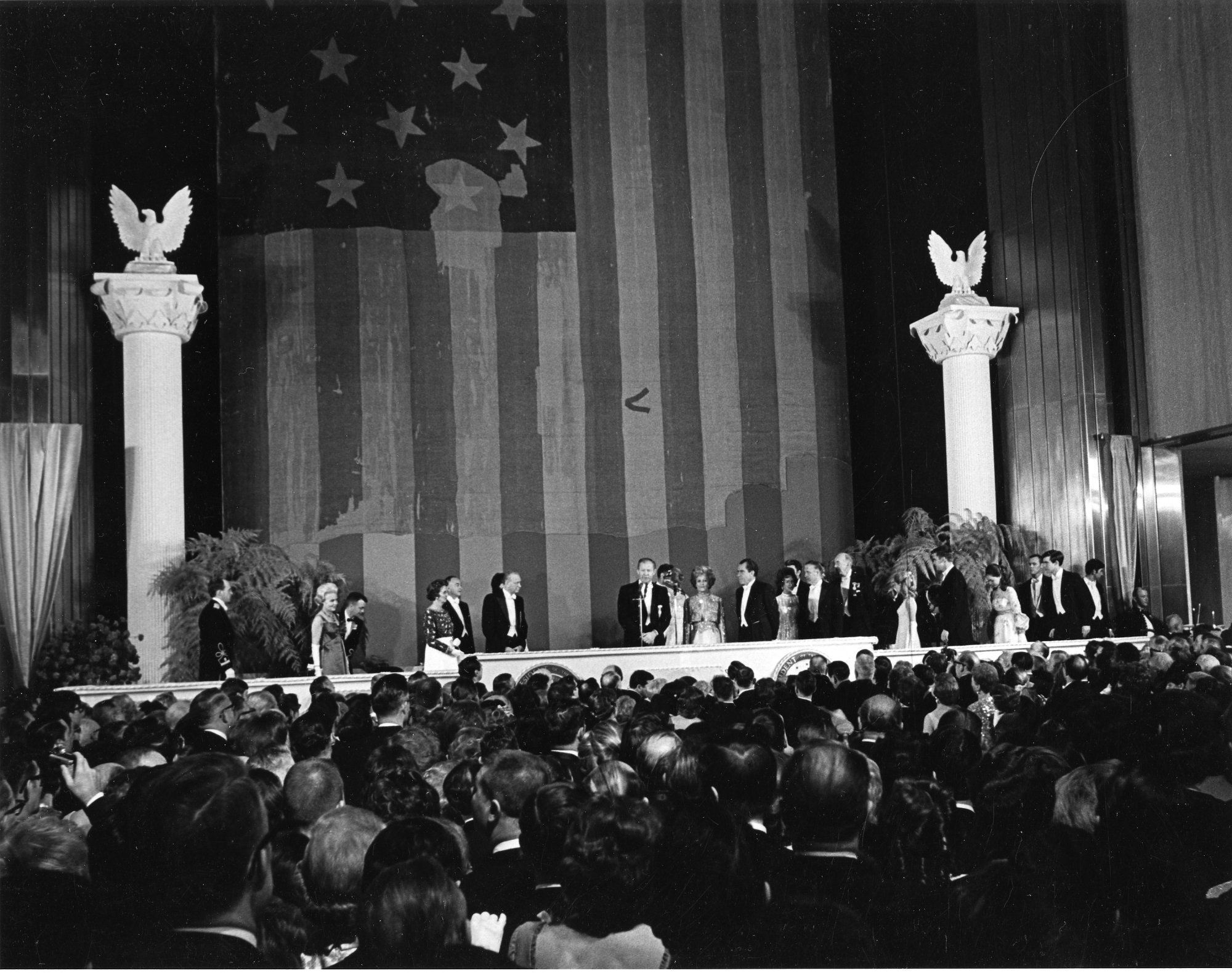 Muhammad Ali visited the museum on March 17, 1976, and donated a pair of boxing gloves and a robe to the museum. Photo courtesy of the Smithsonian Institution Archives. 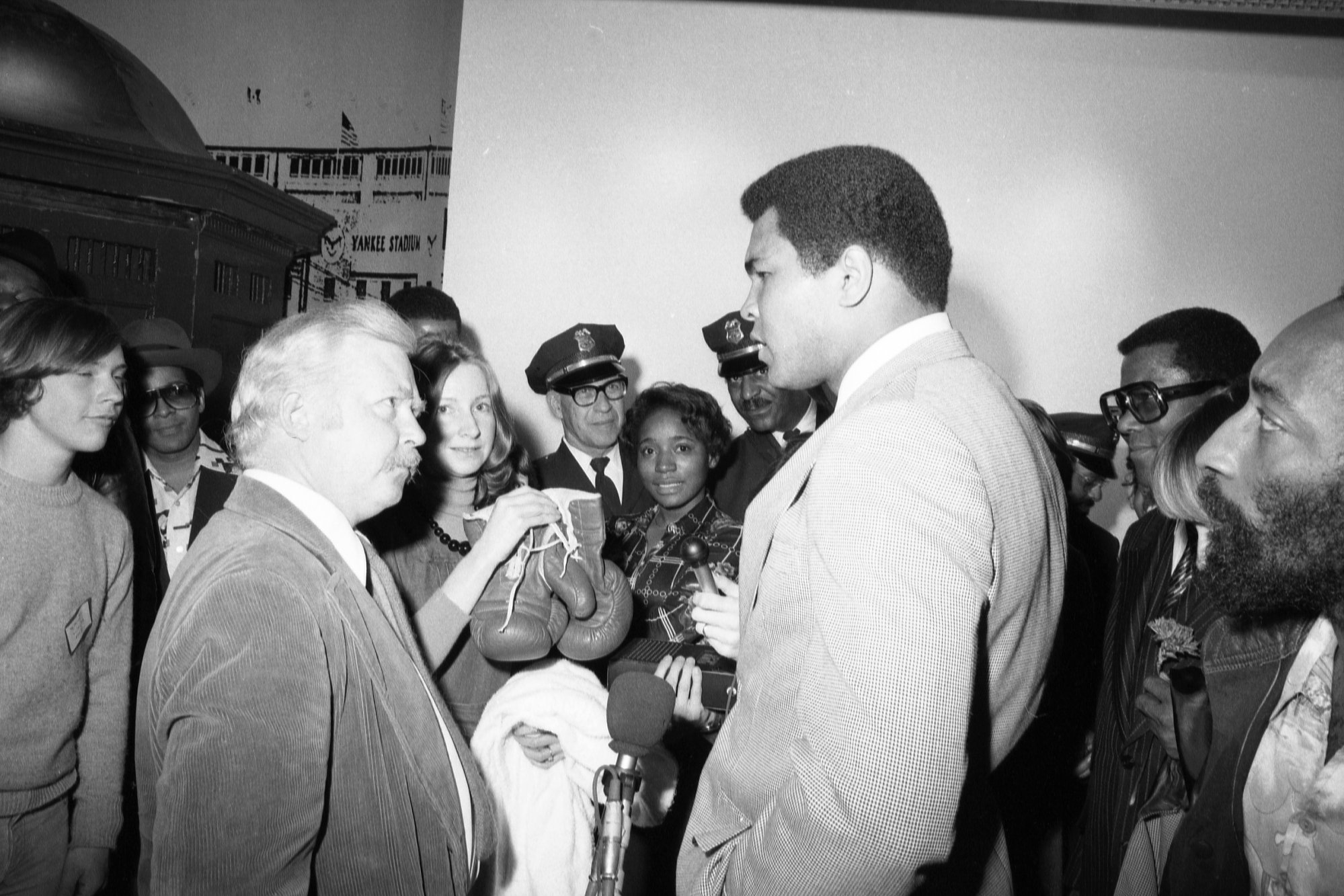 Conservators meticulously work on the Star-Spangled Banner. It is now on display in an environmentally-controlled gallery for many generations of visitors to enjoy. Photo courtesy of the National Museum of American History. 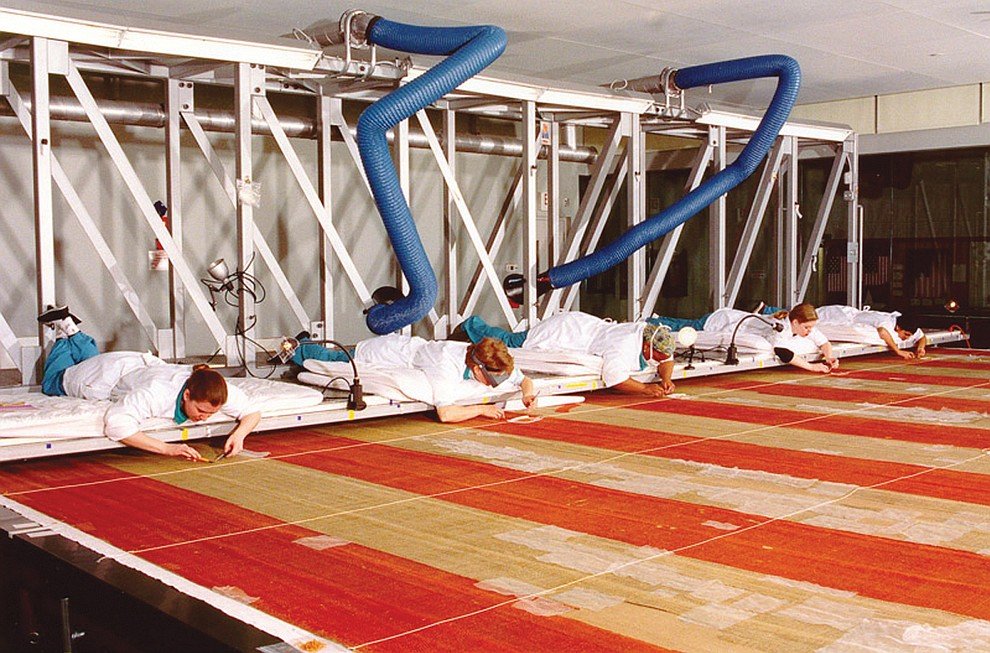 The largest artifact in the museum is a two-and-a-half story Georgian house from the eighteenth century, which tells the stories of the families who lived there. Photo courtesy of the National Museum of American History. 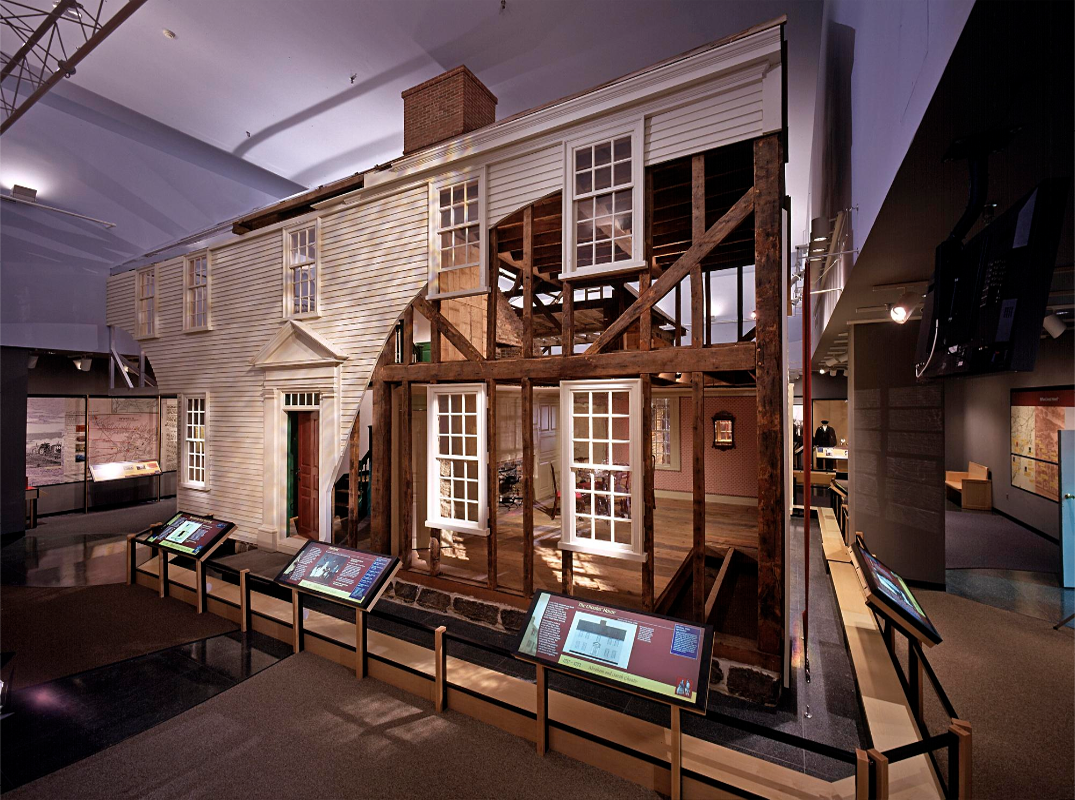 The National Museum of American History traces its roots to the Smithsonian Institution's original collections dating back to the 1840s. These collections were first housed in the Smithsonian Institution Building, also known as the Castle, and then the National Museum Building, now called the Arts and Industries Building, which opened in 1881. The National Museum housed treasures of American history natural history, anthropology, and art. Together, they fostered a "national heritage" for the former colony. Objects of American history were often associated with famous figures, such as Abraham Lincoln's hat, George Washington's uniform, and Benjamin Franklin's printing press, or were connected to innovation in science, technology, transportation, textiles, and musical instruments. Over the course of the twentieth century, the Smithsonian constructed new museums to house collections of natural history, anthropology, and art, leaving the Arts and Industries Building to focus solely on American history. It soon amassed collections of modern industry, photography, clothing, and objects of everyday life. The Arts and Industries Building held the first exhibits of the First Ladies' dresses, the Star Spangled Banner, and, until the establishment of the National Air and Space Museum, collections of airplanes and spacecraft.

As collections, exhibits, and visions of the museum continued to grow, the Smithsonian Institution planned a larger museum dedicated to American history. In 1955, President Dwight D. Eisenhower authorized funding of a new museum building. Its design put a modern twist on classical architecture, indicating that this building would be one that honored the past and looked toward the future. The Museum of History and Technology opened to the public in 1964. The museum also continued collecting artifacts of both distant and recent past, such as Dorothy's ruby slippers from The Wizard of Oz and the Woolworth's lunch counter from the Greensboro sit-ins. In 1980, the museum’s name was changed to the National Museum of American History to represent its mission to reflect the historical experience of America and its people. The museum closed between September 2006 and November 2008 to undergo renovations to the architectural core of the museum and the infrastructure.

Today, the National Museum of American History uses its collections of more than three million artifacts to understand the United States of yesterday and today. One of the most signficant artifacts is the Star-Spangled Banner, which has its own gallery in the museum. The exhibit showcases the flag that inspired Francis Scott Key to write “The Star-Spangled Banner," a poem that later became the United States National Anthem. It was raised over Fort McHenry on September 14, 1814, in celebration of a victory over British forces. Also, in the spirit of creating a dynamic museum that caters to presenting present-day America’s story, as well as its past, there is a space for visitors to share what the American flag symbolizes to them.

The Museum uses artifacts to convey larger ideas, such as in the exhibit “American Stories,” which showcases more than 100 historical and cultural artifacts, including the rarely displayed walking stick used by Benjamin Franklin, Abraham Lincoln’s gold pocket watch, Muhammad Ali’s boxing gloves, and a fragment of Plymouth Rock. One of the most beloved exhibits is “America on the Move,” which uses sights, sounds, and sensations to explore the history of transportation in the United States from 1870 to the present. While the trains and cars in this exhibit seem like the largest artifacts in the collection, that title belongs to the two-and-a-half-story house in the exhibit "Within These Walls," which interprets ordinary home life.  The Museum has tackled complex topics and underrepresented stories such as the 2012 exhibit "Slavery at Jefferson's Monticello: Paradox of Liberty," the first national exhibit on slavery, presented by Monticello and the National Museum of African American History and Culture.

The Museum is also home to the Jerome and Dorothy Lemelson Center for the Study of Invention and Innovation, which leverages research and education to inspire modern innovation. Research opportunities in the museum's collections and archives further understanding of the United States and its place in the world. STEM-focused exhibits such as the Spark!Lab promote creative thinking and innovation for families of all ages, while Wegmans Wonderplace is a space dedicated for children ages 0-6.

Currently, the museum is undergoing further renovation to its west exhibition wing to add a center for education, new spaces for performance, new galleries, and a more updated infrastructure for the west wing of the museum.