Constructed in the early 19th century, this simple, wood-frame dwelling with a gambrel roof is notable for being one of the few remaining examples in Annapolis of a style of home that was once common throughout the area. This type of modest row housing was common during the Revolutionary period and the early nineteenth century. During the Revolutionary War, for instance, the new state government converted buildings that looked much like this one from their primary use as inexpensive rental housing into military barracks for new recruits. The nickname "Hogshead" derived from this use as temporary housing, similar to the storage of goods during transit in a type of wooden barrel called a "hogshead." Today, the building is open to the public as a living history museum. Interpreters are dressed in period attire, and they provide information about what life was like in colonial times, while also highlighting the site as the everyday home of an artisan or craftsman. The property is managed by the organization Historic Annapolis. 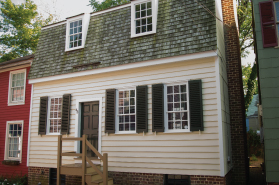 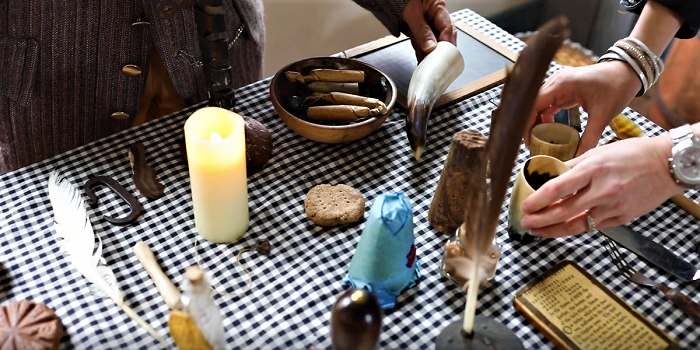 Managed by the non-profit organization Historic Annapolis, Hogshead is a living history museum based in a modest wood-frame building. The property was once used as a dwelling place for an artisan or craftsman and his family. Although the gambrel-roofed structure is believed to have been constructed in the early nineteenth century, it reflects a style of architecture that was also commonly used during the Revolutionary period in the eighteenth century. During that era, this type of property would have been used as rental housing for tenants or as a barracks providing temporary housing for military recruits.

Although the building initially served as private housing, by the 1960s, it had endured a period of neglect and deterioration. After the property was identified as being in need of restoration, it became part of a joint historic preservation project undertaken by the State of Maryland and the non-profit organization, Historic Annapolis. A partial grant from the U.S. Department of Housing and Urban Development helped to finance the cost of the restoration.

During the restoration, much of the original timber framing was retained, but the building's exterior siding and roof covering were replaced. An interior staircase was strengthened, leading up to the second floor. On the second floor, the original flooring, walls, and trim were restored. The cellar, which had previously been filled-in, was also restored, revealing a brick floor, a large hearth for cooking, and a beehive oven for baking.

Today, Historic Annapolis provides tours of the property, which is opened to the public as a living history museum. Costumed interpreters in period attire share details about everyday life in colonial times. By offering a window into the family life of an artisan or craftsman in early Annapolis, the tours are an interactive and hands-on experience that can be enjoyed by all ages. The name of the property, "Hogshead," is a reference to the prior use of such structures as temporary housing for rental tenants or recruits, similar to the temporary storage of goods during transit in wooden "hogshead" barrels.