The memorial honors the life and work of Washington Irving (1783-1859). Born in New York City, he is considered one of the first great American authors. Irving is best remembered today for his short stories “The Legend of Sleepy Hollow and “Rip Van Winkle.” In 1871, only a little more than a decade after Irving’s death, a bronze bust of the author was dedicated in Prospect Park in Brooklyn. Created by sculptor James Wilson Alexander MacDonald, the bust combines a naturalistic facial depiction of Irving with the bare shoulder convention of classical sculpture. It sits on a granite pedestal shaped like an inverted pyramid. 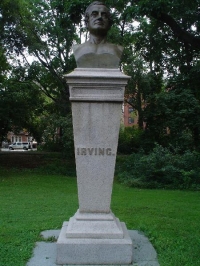 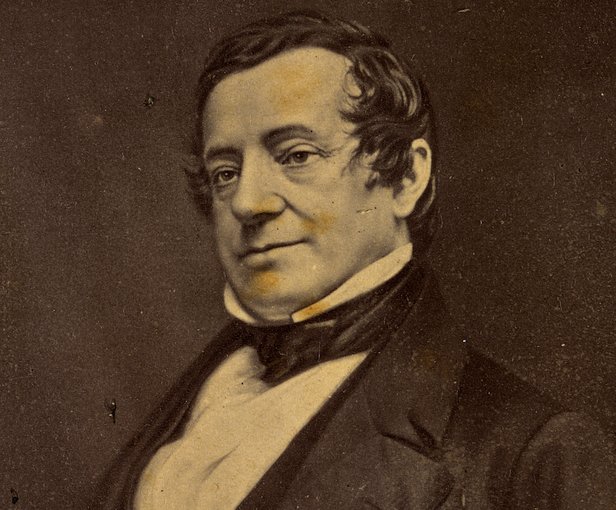 Born in New York City on April 3, 1783, Washington Irving was the last—and favorite—of eleven children born to William Irving Sr., a Scottish merchant, and his English wife, Sarah (Sanders) Irving. During his early years, his father’s mercantile business prospered, gifting him a privileged upbringing. After attending private schools, Irving read law sporadically, in part to avoid becoming involved in his father’s firm, which had been the fate of his four older brothers. Interested in writing and storytelling from a young age, he indulged his creative side while reading law on and off. In 1802 and 1803, Irving published a series of satirical essays under the pseudonym Jonathan Oldstyle in his older brother Peter’s newspaper, the Morning Chronicle.  Over the next few years, he embarked on a series of excursions, which culminated in a tour of Europe from 1804 to 1806. Upon returning to the United States, Irving passed the bar and began practicing law.

Despite being a lawyer, Irving’s literary pursuits remained his chief interest. From 1807 to 1808, he, in partnership with his older brother William and friend James Kirke Paulding, published Salmagundi, a satirical periodical. A year after Salmagundi ceased publication, Irving published A History of New York by Diedrich Knickerbocker (1809), a satirical history of the city. In 1811, he left his native New York and relocated to the nation’s capital, where he conducted lobbying work for the family’s mercantile firm, now owned by his older brothers (William Irving Sr. died in 1807). After serving in the War of 1812, Irving moved once again—this time to Liverpool, England—to look after the interests of his brothers’ firm. While on a business trip in London in 1817, Irving met Scottish novelist Sir Walter Scott. The encounter not only led to a lifelong friendship between the two, but also inspired Irving to continue writing. A few years later, he published The Sketch Book of Geoffrey Crayon, Gent., (1819-1820), a collection of roughly thirty essays and short stories that included “The Legend of Sleepy Hollow and “Rip Van Winkle.” Despite being merely Americanized versions of German folktales, they have been referred to as the first American short stories. The book proved a commercial success in the United States and Great Britain, and convinced Irving that he could be a professional author.

In 1826, Alexander H. Everett asked Irving to join the American delegation in Spain. While living in Spain, he published Columbus (1828), a biography of the famous explorer. The work helped to transform the theretofore marginally-known navigator into a national hero in the United States. It also promulgated the false belief that Europeans of the late-fifteenth century believed that the Earth was flat.

After living abroad for nearly two decades, Irving returned to the United States in 1832. In the subsequent five years, he traveled the western part of the country, which inspired him to write A Tour of the Prairies (1835), Astoria (1836), and The Adventures of Captain Bonneville (1837). In 1842, Irving once again left the United States, this time to serve as minister to Spain. He would occupy the position until 1846. After his time as an American diplomat came to an end, Irving returned to his homestead, “Sunnyside,” in Tarrytown, New York. In his final years, he wrote a five-volume biography of his namesake, George Washington. Irving died on November 28, 1859 at the age of seventy-six.

In 1871, only a little more than a decade after Irving’s death, a bronze bust of the well-known American author was dedicated in Prospect Park in Brooklyn. Created by sculptor James Wilson Alexander MacDonald, the bust combines a naturalistic facial depiction of Irving with the bare shoulder convention of classical sculpture. It sits on a granite pedestal shaped like an inverted pyramid.