Cathedral of the Blessed Sacrament

Built from 1886-1889, the ornate Cathedral of the Blessed Sacrament was, at the time of its construction, the largest cathedral west of the Mississippi--and though currently dwarfed by Sacramento’s downtown skyscrapers, at a towering 216 feet it was also the tallest structure in the city for a time. The cathedral was the brainchild of Catholic Bishop Patrick Manogue, who had previously mined gold in California’s Sierra Nevada Mountains to pay for his church education. John Mackay, owner of the famed Comstock Lode silver mine in Nevada, was one of the cathedral’s key financiers. Built intentionally near the State Capitol, it has held inaugurations and funerals for mayors and governors through the decades. A recent $34 million restoration has reopened the iconic dome to the public again for the first time since the 1930s.

An 1888 rendition of the Cathedral, which was not finished until the following year (CA State Library). 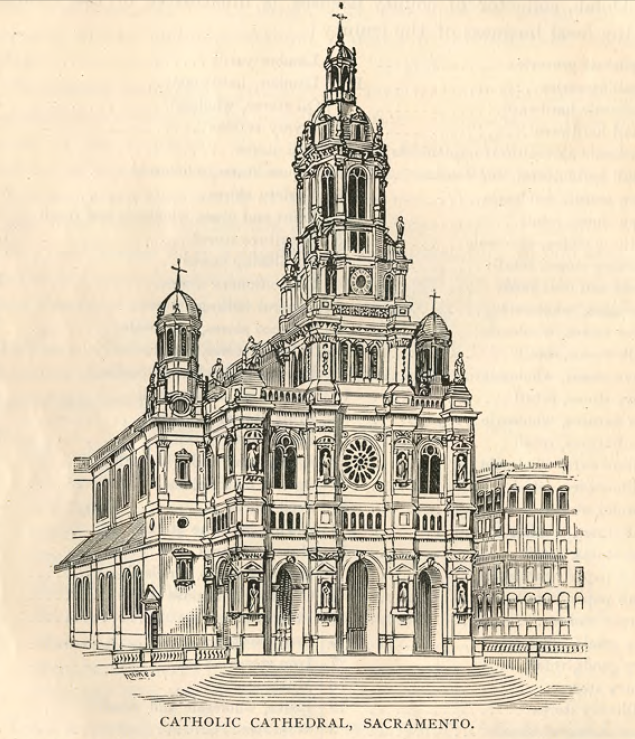 The unpaved streets of late 19th Century Sacramento can be seen in this stereograph from 11th and K Streets, from which the spire of the Cathedral can be seen in the background (CA State Library). 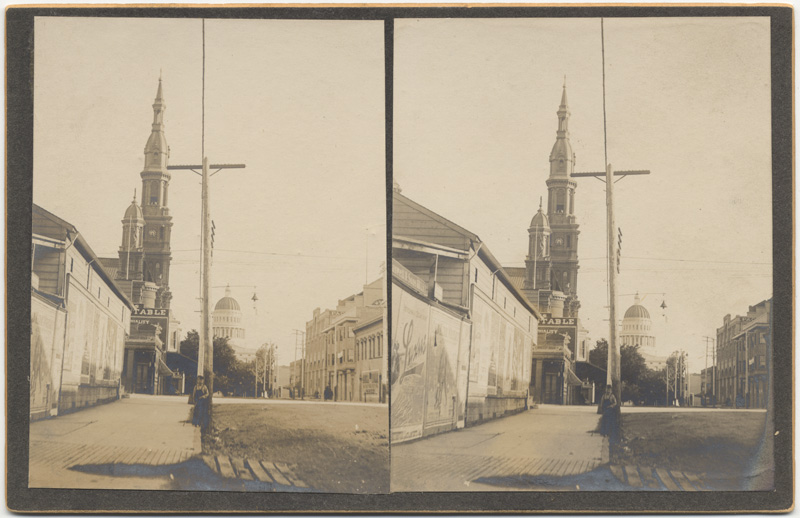 The Cathedral as seen from the Capitol dome on January 1, 1900. The Cathedral's close proximity to the Capitol is evident--part of Manogue's vision to manifest Church and State side by side (Sacramento Public Libary). 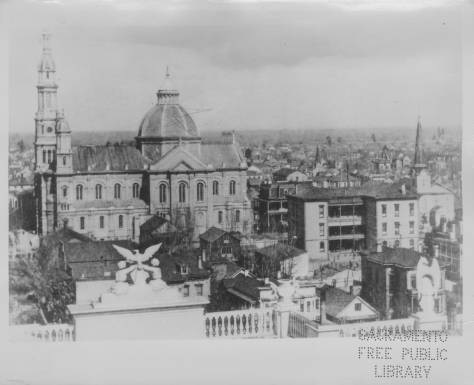 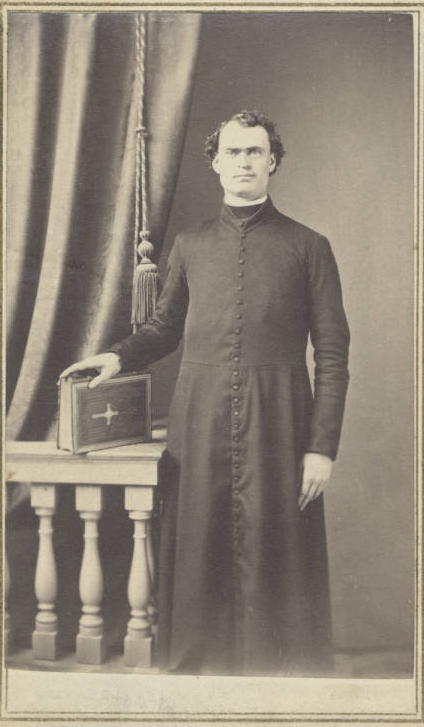 Bishop Manogue in 1885, the year before construction on the Cathedral began. He was buried in Sacramento's St. Joseph Cemetery after his death in 1895. 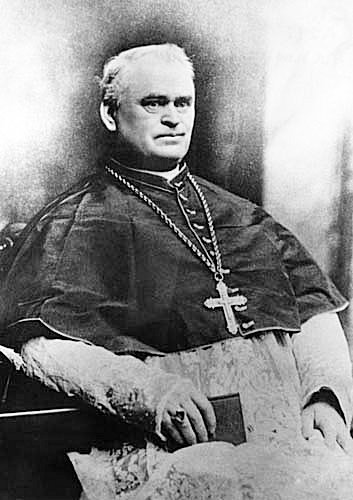 A 1910 postcard shows off the Cathedral's ornate interior. 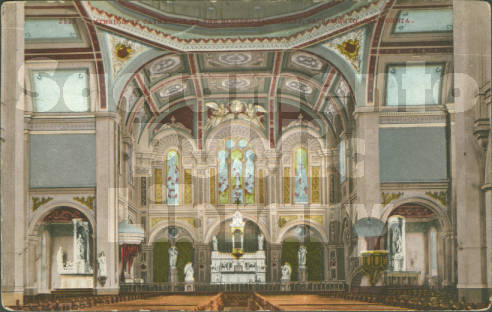 Stone columns in the Cathedral's interior were hollowed out for steel seismic reinforcements during its extensive 2004-05 modernization (Architecture Week). 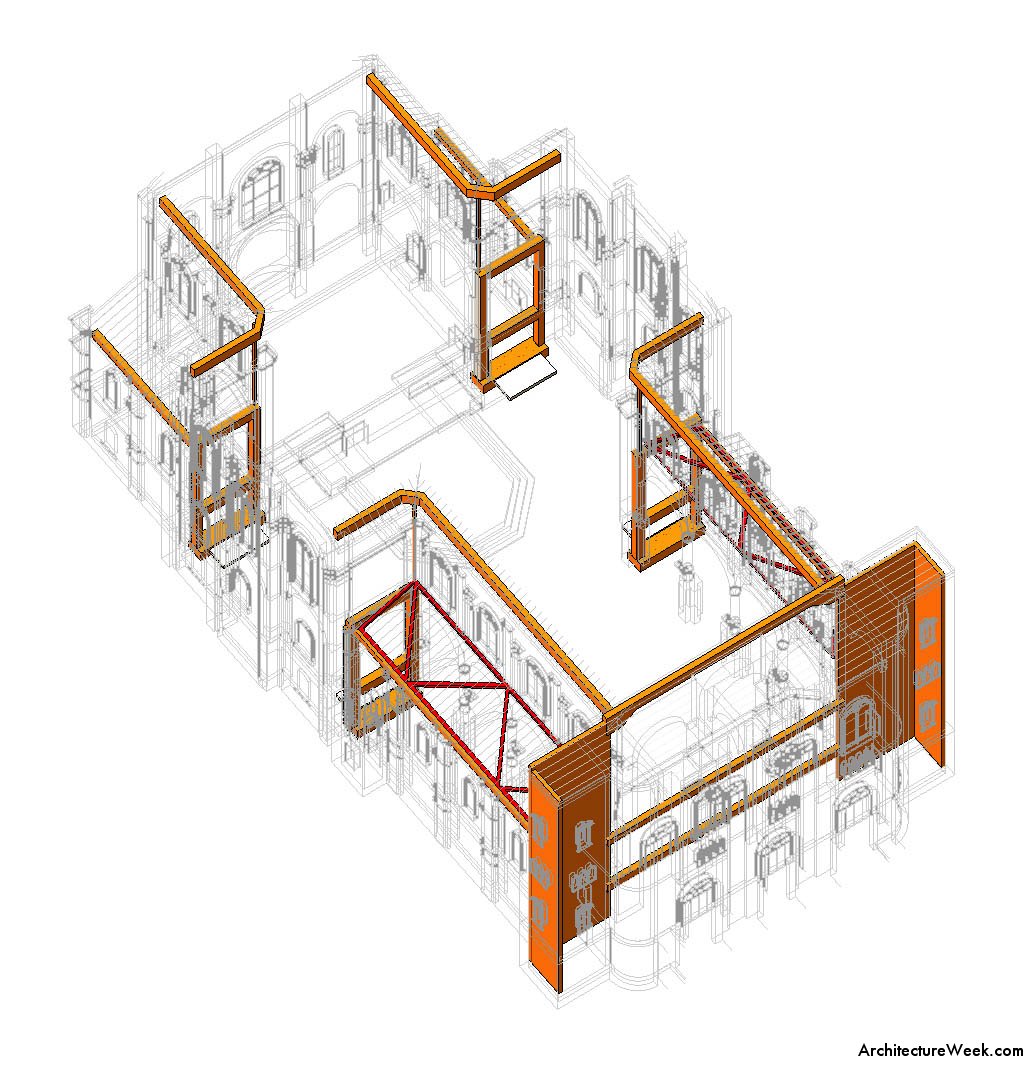 The wooden support structure of the iconic dome's interior. The steel truss at bottom supported the ceiling which was put in to the mask the dome in the 1930s (Architecture Week). 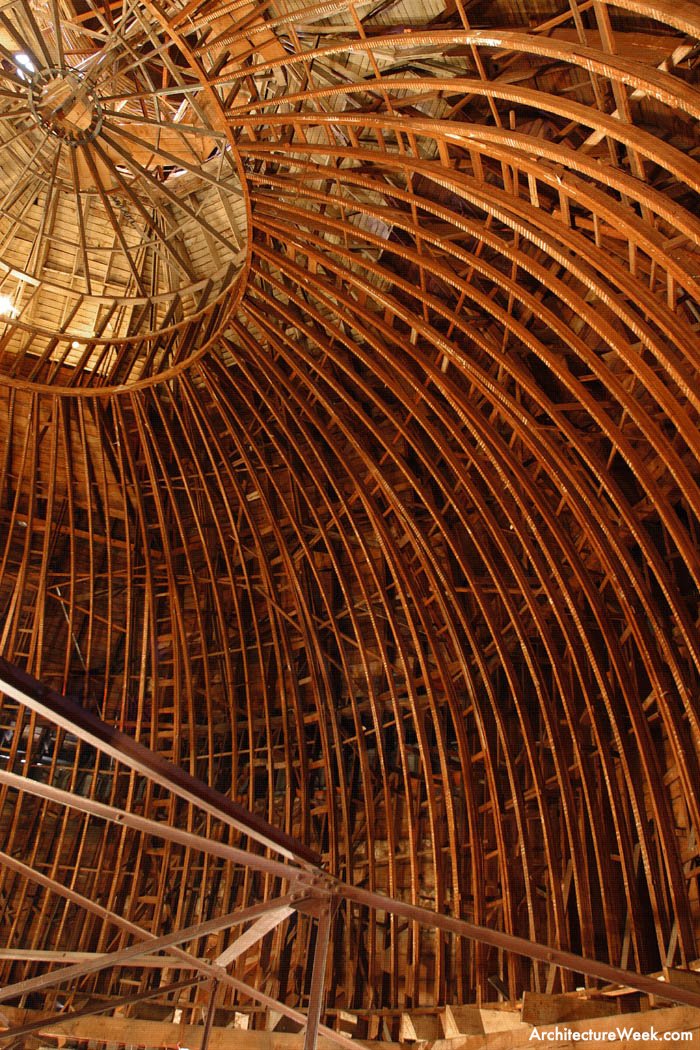 The Cathedral's dome (top left) had been covered in the 1930s by a shallow inset ceiling, possibly to address acoustic problems.This false ceiling was removed during the recent renovation, and other measures addressed the acoustics. 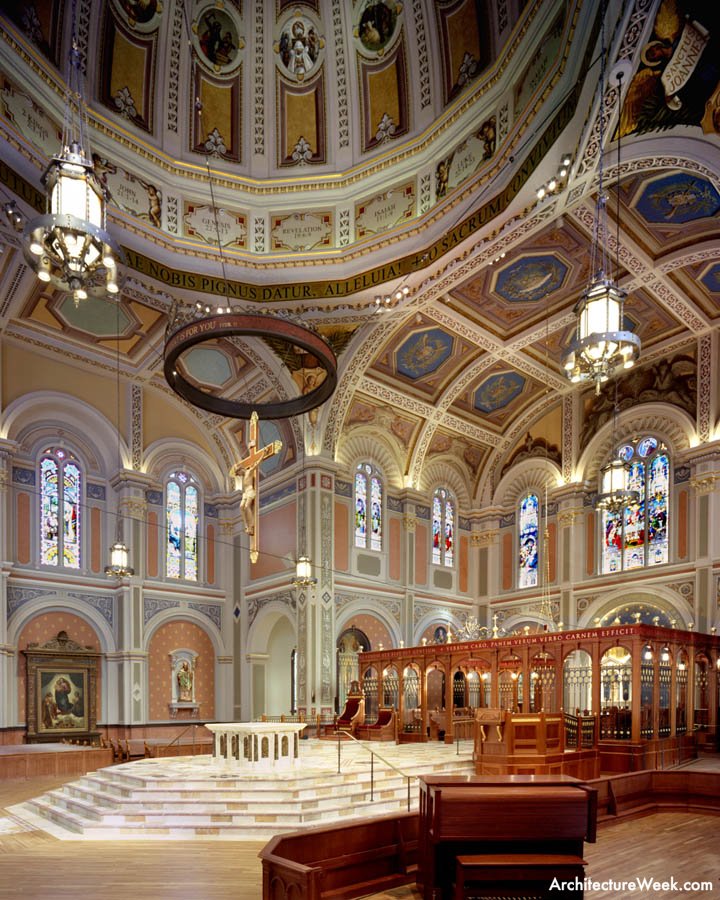 The iconic structure that was, for a time, Sacramento’s tallest building was largely the result of efforts driven by the Sacramento diocese’s first bishop, Patrick Manogue. As a gold miner in the Sierra Nevada Mountains of California in the 1850s, Manogue planned from the beginning to use his earnings to finance a religious education. The 6-foot, 3-inch Irishman prospected for four years to support his siblings while continuing studies on his own. At long last, he had saved enough to move to Paris, where he completed his training and was ordained as a Catholic priest. His first assignment, as the Civil War raged in 1862, was Virginia City, Nevada. The silver boom in the area had given birth to a rough frontier town to which the physically imposing Irishman was well-suited. Performing commendably there for eighteen years, he was made Bishop in 1880.

In 1884, he was moved to Grass Valley, California, but stayed only two years--Manogue had lobbied to move the headquarters of the archdiocese to Sacramento, no doubt witnessing California’s shift away from prospecting and mining to more permanent enterprises. His efforts met with success. In 1886, the Catholic church officially shuttered the Archdiocese of Grass Valley and opened the new Archdiocese of Sacramento (making Manogue the final bishop of the former and the first bishop of the latter), and work began immediately on the new cathedral.

The Cathedral of the Blessed Sacrament’s design was heavily influenced by the Church of the Holy Trinity in Paris, which Manogue greatly admired during his training there. The exterior was reminiscent of Italian Renaissance church architecture, while the interior was distinctly Victorian (the era in which the Blessed Sacrament was built). Tapped for this ambitious undertaking was San Francisco-based architect Bryan James Clinch, an Irish immigrant like Manogue, who before his death in 1906 would design over thirty Catholic churches and church buildings in California. Manogue’s longstanding friendship with the miners of the area also proved useful as John Mackay, owner of Nevada’s lucrative Comstock Lode, and several other mining magnates donated funds to the construction.

The new Cathedral was dedicated three years later in 1889, with seats for 1,400 parishioners. Manogue died in 1895, still bishop of the diocese he built. Manogue’s cunning choice of location next to the Capitol grounds, which he intended to express the co-equal cultural pillars of Church and State, has served the Cathedral well through the 20th Century, as the building has frequently been chosen for state inaugurations and funerals. Former California Governor Pat Brown’s funeral was held there in 1996.

Frequent additions, redecorations, and other changes through the decades took their toll on the aesthetic unity of the Cathedral’s interior, however, and the venerable structure’s architectural identity lay much obscured as it entered the 21st Century. In August 2004, the Blessed Sacrament closed its doors to begin a titanic construction project, intended to both modernize the building while restoring it closely to its 1889 appearance. Seismic improvements, marble flooring, and alterations to the pews were made, along with the suspension of a 2,000-pound crucifix. Most dramatic of all was restoration of the original church dome, which had been replaced by a shallower ceiling in the 1930s, for reasons unknown, and of which no photographs existed to aid in reconstruction. It was feared to be destroyed, making restoration all but impossible. Fortunately, when the ceiling was removed, the interior of the original dome was found to be almost entirely intact, which allowed for a detailed and accurate modernization process.

Though the renovation also included other huge improvements and refinements, the Cathedral reopened just over a year later in November 2005, at a cost of $34.5 million. Despite the success of the project itself, the diocese received some criticism for the unexpected expense--originally projected at less than $20 million--which is the largest in the diocese’s history, and which critics have pointed out could have gone to charitable causes instead. Church officials pointed out that the money had already been allotted, and would serve to keep the Cathedral operational for generations to come.

Cathedral of the Blessed Sacramento as Seen from the Dome of the Capitol Building. 1900. Retrieved from the Digital Public Library of America, http://cdm15248.contentdm.oclc.org/cdm/ref/collection/p15248coll1/id/1207. (Accessed April 11, 2018.)

A short walking tour providing a quick cross-section of architectural highlights and public monuments! A great way to learn about some of Sacramento's downtown historical gems in an easy loop that starts and ends at the Convention Center.

A short driving tour that takes the early history of Sacramento and California beyond the boundaries of Old Sac State Historic Park. These museums and landmarks tell more of the story of the city's founding figures through art, artifacts, and monuments.