Designed by artist Jean Westmacott, the Athena Statue stands outside the entrance to the Classic Center and commemorates the 1996 Olympic Games. Athena is carved from Italian marble; over one shoulder she holds a cloak and on her other side rests a shield detailed with a circular pattern of olive leaves. The statue rests on a pedestal of topaz blue granite and inscribed with an ancient Athenian oath. Today, the Athena Statue is an important symbol of the community. 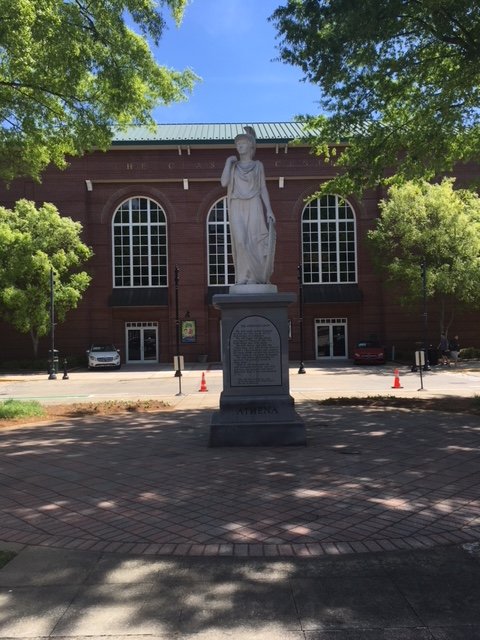 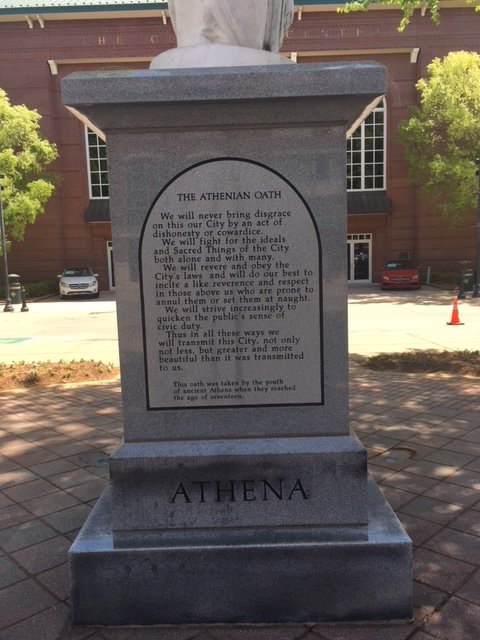 South side view of Athena and her shield; inscribed on the base are the words "Arts" and "Athletics" 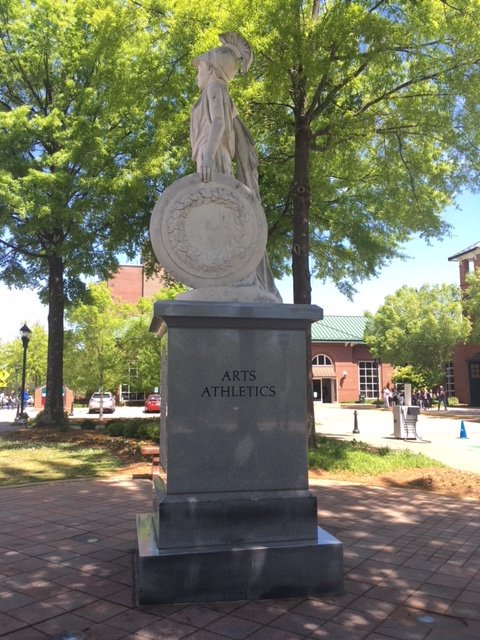 East/back view of Athena, facing the Classic Center; inscribed on the base are the words "Industry," "Commerce," and "Agriculture" 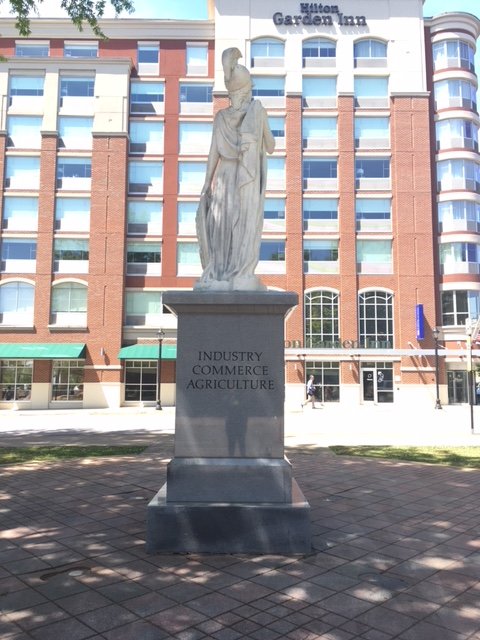 North side view of Athena and her cloak; inscribed on the base are the words "Wisdom" and "Learning" 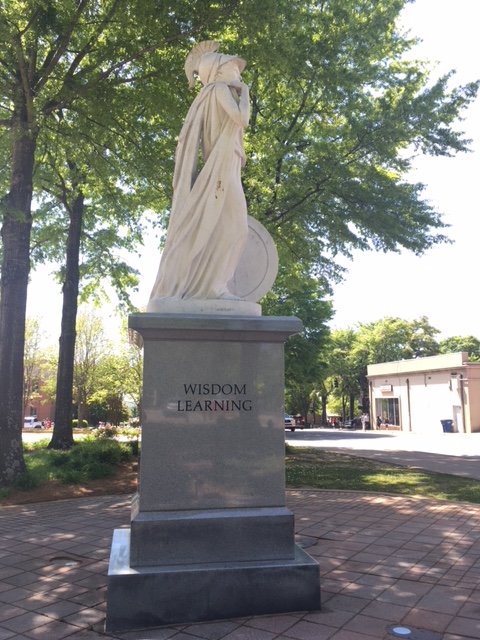 The nine-foot-tall Statue of Athena stands outside the entrance to Classic Center on N Thomas St. in Athens. In 1993, the Project Athena organization formed to commemorate the upcoming 1996 summer Olympics (for which Athens and the University of Georgia hosted events for soccer, volleyball, and rhythmic gymnastics)1 through public art. Sculptor and curator for Brenau University's art galleries Jean Westmacott received the commission in 1994.2 Westmacott’s plaster cast of Athena went on display at Lyndon House in Athens in January 1995,3 where the cast remained until the unveiling of the finished Athena Statue on May 3rd, 1996, two months before the start of the Olympic Games.4 Project Athena was a privately funded effort, relying on donations of any amount from the citizens and students of Athens5 to design, sculpt, and erect the $105,000 statue.6

The Athena Statue was carved from white marble in Carrera, Italy,7 and designed to mimic the classical style often associated with ancient Greek sculpture. Westmacott modeled Athena after Lara Magzan; Magzan was Westmacott’s student assistant in Brenau's galleries and is from the Balkans region across the Adriatic Sea from Greece.8 At her left side Athena holds a shield decorated with a circular pattern of olive leaves, and over her right shoulder she holds a cloak. Westmacott drew inspiration from an ancient Athenian tradition: “There were two statues of Athena in the Parthenon [in Athens, Greece]. The smaller statue was the focus of a procession that occurred every four years, and part of the event was to bring a new ‘peplos’ or cloak to Athena.”9 Therefore, the cloak that was once representative of a gift to Athena now represents the Athena Statue itself, which is a gift to the city of Athens (Georgia) from its citizens. The circle of olive leaves on Athena’s shield “can be interpreted as the Olympic laurel wreath.”10

Athena rests on a pedestal of topaz blue granite.11 Picture 2 shows that on the surface of the pedestal facing Thomas Street is an oath and its explanation. ” On a lower level of the base is etched “Athena.” On the south face of the pedestal are inscribed the words “Arts” and “Athletics;” on the eastern side facing the Classic Center are “Industry,” “Commerce,” and “Agriculture;” and on the north side are “Wisdom” and “Learning.”

When the Athena Statue was announced in 1994, response from the community was mixed. Some opposed the construction of a statue of a pagan goddess.12 Others hoped that such a crowd-funded project would serve to unite the community through public art,13 and still others held no opinion of the statue or didn’t know much about the project.14 Despite some past opposition, since its unveiling, the Athena statue has become a symbol for Athens-Clarke County. In August 2016, the Athens-Clarke County police officers began wearing badges depicting City Hall flanked on either side by Athena.15 On January 21st, 2017, the Athena Statue became the rallying point for Athens’s Women’s March, which attracted hundreds of protesters.16

"Project Athena and the unifying fund-raiser." The Red and Black (Athens) May 16, 1994. Editorial.

McCommons, Pete. "Opponents of Athena Statue May Open up a Pandora's Box." Flagpole Magazine. May 17, 1995.