Unveiled in 2011, this memorial was the first monumental sculpture to depict Dr. Martin Luther King and his wife Coretta Scott King. The site of the memorial is located near downtown Allentown at the Harry A. Roberts Plaza. The monument was dedicated to commemorate the life of the Kings while addressing the issues of civil rights, world peace, and economic equality.

The statue of Martin Luther and Coretta Scott King in Allentown, PA. 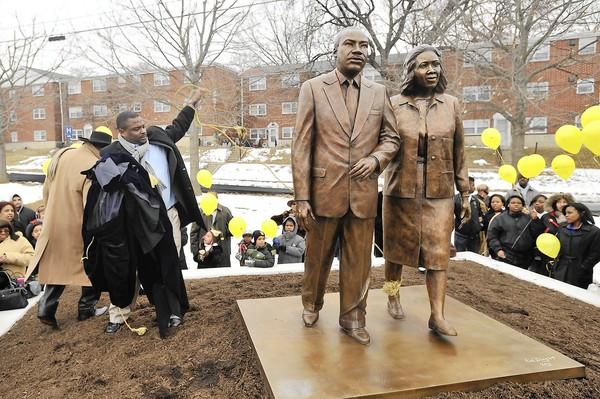 The statue is made from bronze and is the only one of its kind in America, with Dr. King and his wife side-by-side holding hands. 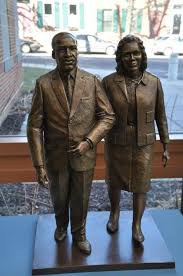 Harry A. Roberts, for whom this plaza was named, worked to create a monument that would honor both Martin Luther King Jr. and Coretta Scott King. Although Harry died three years before the statue was unveiled in 2011, his brother Richard was present at the dedication on Martin Luther King Day in 2011. A modest crowd of just over one hundred attended the dedication and sang “We Shall Overcome” while yellow balloons went up into the air.

Coretta Scott King was one of the most influential Women’s Rights leaders in the world. She often participated in civil rights demonstrations with her husband while also standing guard against those that would harm their family and home. She accompanied her husband and other civil rights leaders around the world and personally spoke and wrote about many topics on social justice. After her husband’s assassination in 1968, Coretta Scott King worked to develop the King Center which operates as a center for nonviolent social change as well as a memorial for her family. Scott also worked hard to establish Dr. King’s birthday as a national holiday in 1986.