At this location on February 20, 1960, university students from several black colleges in Nashville joined together to challenge racial discrimination through a sit-in at the Walgreens lunch counter. Walgreens was one several downtown Nashville establishments selected for the sit-in protests. The students faced hostility and violence, but they continued their protests until May 10, 1960, when six nearby establishments agreed to serve all people regardless of race. 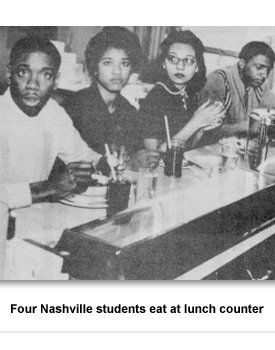 Student protesters look on at the sign Walgreens management had just put up once they had attempted to be served. 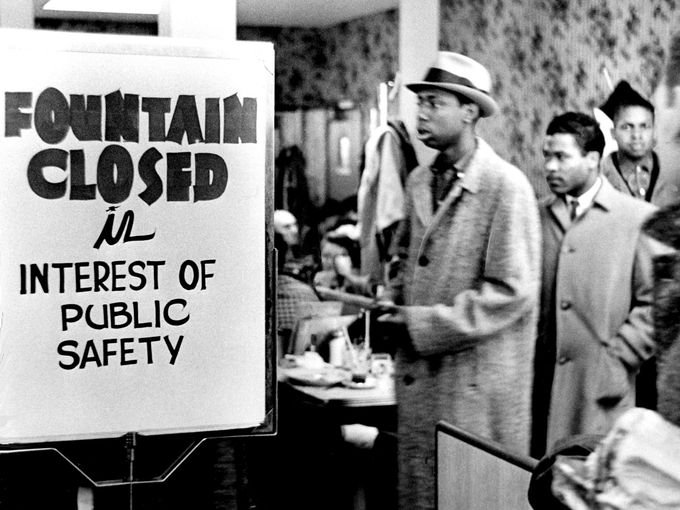 The student protesters sit at the Walgreens counter in protest of the sign. 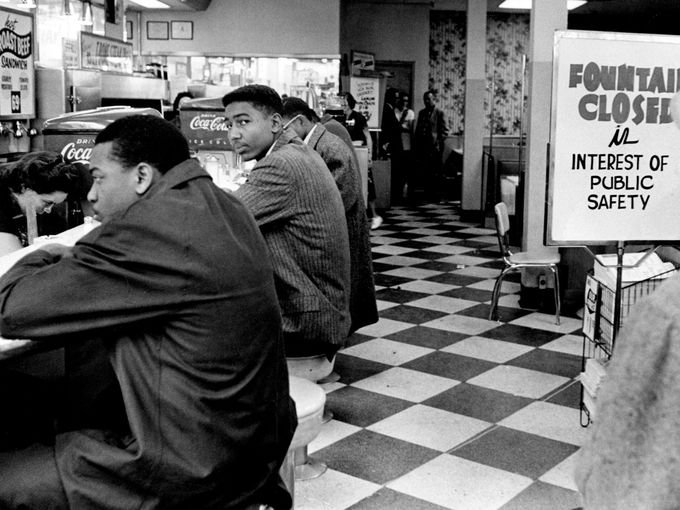 University students from black colleges in Nashville including American Baptist, Fisk, Meharry, and Tennessee Agricultural & Industrial School held a sit-in protest at the downtown Walgreens on February 20, 1960. The students utilized the non-violent teachings of international civil rights leaders under the direction of Vanderbilt student James Lawson. Thanks to this training, the students met threats and violence with quiet dignity.

In response to the students attempted to be served at the Walgreens counter, the staff put up a sign that stated: "Fountain closed in the interest of public safety." In response to this action, the student protesters occupied the lunch counter and more gathered at the Walgreens to support their peers in protest of Walgreens' policy of only serving white patrons at the counter.

Luther Harris, a Fisk University student who acted as spokesman for the group of student protesters at the Walgreens counter, said, "it was the first effort in the South to desegregate drugstore facilities."

Throughout the course of the Nashville sit-ins, 150 students were arrested for protesting. Thirteen lawyers, including Z. Alexander Looby represented the group. The home of Z. Alexander Looby was bombed on April 19, 1960, in an attempt to intimidate him and other attorneys. Thankfully, none of his family members were injured in the attack on their home. Undeterred, the attorneys and students continued their protest.

On the same day as the attack on Looby's home, 4,000 black and white residents marched to City Hall where they demanded to speak with Mayor Ben West about the violence and their opposition to racial discrimination. When questioned, West said he believed the lunch counters should be desegregated. Thanks to the student-led sit-ins and the support of adult leaders, the sit-ins and other actions led to Nashville's restaurants and theaters ending their discriminatory policies.

Although the students were faced with backlash, arrests, and violence, they continued their protests until May 10, 1960, when six nearby establishments agreed to serve all people regardless of race.