Ann Street in October of 2010 by Grondemar, Contributor to Wikimedia Foundation 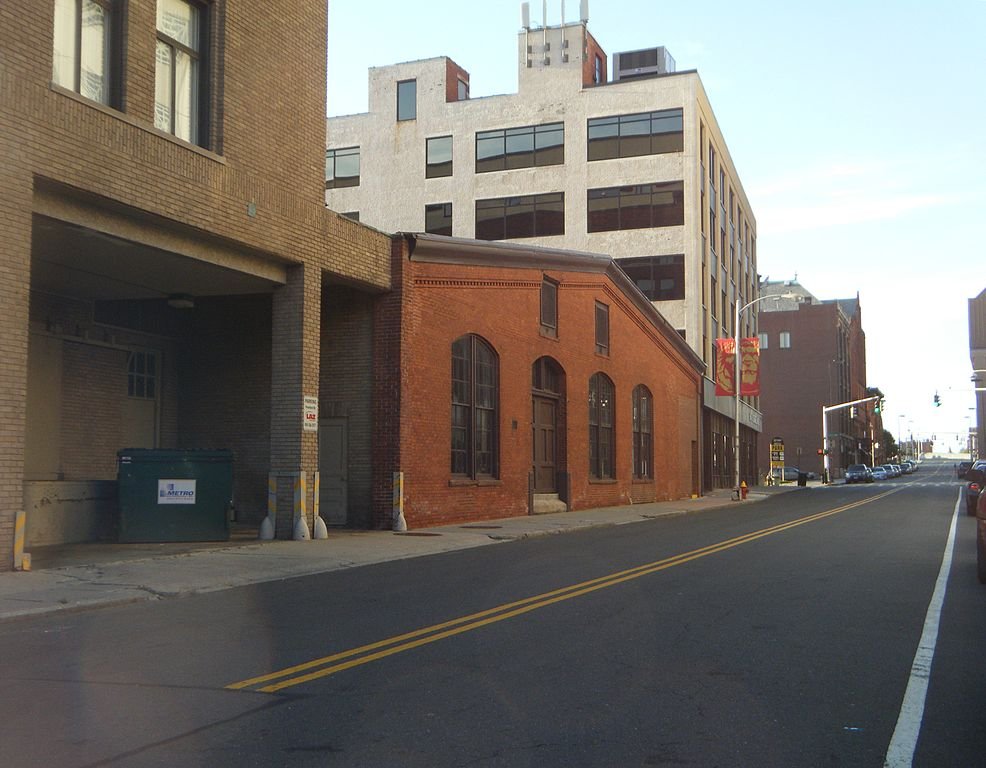 The buildings of the Ann Street Historic District represent a broad swath of architectural styles whose origins spread across more than a century of Hartford’s history.  The earliest building of architectural note within the district is St. Patrick’s Church.  Having been in service to Hartford’s Irish population since 1851, the parish overseeing St. Patrick’s employed architect Patrick C. Keeley to design the structure now known as St. Patrick’s Church.  Construction completed on the church in 1876, and it would come to serve the Irish immigrant population of Hartford especially well.

The Church’s proximity to another important building only serves to highlight the nuanced stylistic significance of each building.  The 1894 Masonic Temple was constructed in a Moorish Gothic style, drawing on stylistic roots of a similar time period to St. Patrick’s but from a different region of Europe and the Mediterranean.

The Masonic Temple served largely as a social hub for Hartford businessmen, much like Masonic Temples around the country.  The Temple is imposing by design, and many of the architectural choices were motivated by the symbolism and philosophy of the Masonic principles.

Departing from religious and philosophical landmarks, the Ann Street Historic District also contains the Hotel Hartford.  The hotel was originally constructed at the turn of the century to serve as apartments in the neighborhood.  Known as Lenox Court at the time, the building fulfilled its original purpose for approximately two decades, housing approximately 25 families of the early 20th-century middle class.

Lenox Court was designed by Hartford Architects Bayley and Goodrich in a style that drew from the Classical, neo-Georgian, and Second Renaissance Revival styles of architecture.  These characteristics made it stand out as something of a flamboyant structure in comparison to the other buildings of Hartford.  Its design was showy and exquisitely crafted.

One of the most historically valuable buildings in terms of industry in Hartford is located in the Ann Street Historic District.  Known simply as “The Telephone Building,” it was the home of Southern New England Telephone Company, which, over time, grew to be the primary provider of telecommunication services to the State of Connecticut.

The building was designed by William D. Johnson, a Hartford architect, and was constructed in 1890.  On a stylistic level, the building is particularly luxurious, with a showy façade and rows of arches that make it unique to all the other buildings in the district save for its architectural twin, also designed by Johnson, the City Missionary Building.

The Southern New England Telephone Company later moved to another building in the district which was designed by Leoni W. Robinson to be constructed in 1911.  Leoni was known for his work across the state, being the founder of two major Connecticut Architects organizations and having done extensive work in New Haven, Connecticut.  This new headquarters for the Telephone Company is most similar to the Hartford Electric Light Building (explored below,) both of which drew from the Renaissance Revival school of design.

The Hartford Wire-Works is another architecturally notable building in the Ann Street District.  Though serving a primarily pragmatic role within the district as a wire fence manufacturing factory, great care was put into the design of the building nonetheless.  The architect, Isaac A. Allen, Jr. of Hartford, built the factory with inspiration from the Renaissance Revival school of architecture.  The factory remained open from its construction until 1982, when it relocated out of the city.

Allen and Collens built a number of other buildings in the Hartford area, including the Webster Memorial Building, which is listed alongside the Ann District on the National Park Service’s National Register of Historic Places.

Built in 1927 to the designs of Hartford architectural firm Buck and Sheldon, another utilities building known as the Hartford Gas Company drew from the Moorish Revival movement.  Located next to the Telephone Building, the differences in style couldn’t be starker, especially on the interior of the structure.  The interior of the Gas Company building was noted for its unique flavor and ornate design.  Much like the Hartford Electric Light Building, the Gas Company Building was a necessary requirement of the growth of the city around it, the denizens of which needed access to gas.

Once known as the home of the First Unitarian Church of Hartford, the building occupying lot #18 later became the home of the Congregation Ados Israel, one of Hartford’s oldest Orthodox Jewish synagogues.  Featuring Georgian Revival architecture downscaled to fit comfortably within the confines of the tight streets, it is notably small compared to the buildings around it.

Despite being one of the smaller buildings of the street, the Georgian influence certainly displays an artful flourish, prominently featuring a large arched window and beautifully-placed brickwork.

Within the district, there are three distinct eras of industrial development which rise visibly above the background of the City of Hartford.  Buildings like the Hart Manufacturing Company Building reflect the transition from horse-drawn carriages being a major form of transportation to automobiles being the primary form of transportation.

Finally, the block located at 283 – 291 Asylum Street (lot #11 of the District) and its sibling building, the Empire Hotel, serve as ideal snapshots of the late-19th-century design choices for commercial blocks.  Largely drawing on Italianate design features, this building served as the home of numerous businesses since its construction sometime in the mid-1870s.  At one point, it was also the home of a hotel by the name of Hotel Avon, though this hotel closed its doors before the Empire Hotel that resided nearby.

As a whole, the Ann Street Historic District represents one of Hartford’s most vital economic neighborhoods, serving as the home of core industries, some of which are still in business to this very day.  From steam companies to wire manufacturers to electricity providers, the Ann Street District stands as a snapshot of turn-of-the-century industry and the changes that an evolving society can have on the industries around it.