Founded in 1981, the Cape River Heritage Museum is located in Cape Girardeau, Missouri and is dedicated towards preserving the history of city, the Mississippi River, and southeast Missouri. It is housed in an old fire and police station that was constructed in 1909. It contains thousands of items relating to the city and the area, including fire and police memorabilia, artwork, maps, photographs, vintage clothing. It has exhibits on steamboats, Native American culture, fire and police history, among others. It also offers special events and tours.

Cape River Heritage Museum is located in the city's former fire and police station and offers a variety of exhibits that interpret the history of southeastern Missouri. 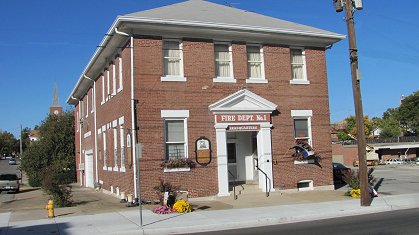 When it was constructed, the building also served as a courthouse and jail. The fire and police moved out in the 1960s and 1970s and efforts began in 1975 to open a museum that would preserve the history of southeast Missouri. The Southeast Missouri Museum opened a year later (not the current building) but due to lack of funding for costly repairs it was forced to close in 1980. Fortunately in 1981, the museum board and the city agreed that the old fire house would become the home of the museum, which was renamed as the Cape River Heritage Museum.

The museum is open on Thursday, Friday, and Saturday afternoons from mid-March through mid-December.