A fine example of Spanish Colonial Revival architecture, the former Marquette Hotel (now called Marquette Tower) was built in 1928 and was integral to Cape Girardeau's social and economic life for many years. It remains an important landmark and is now an office and commercial building as part of the Marquette Tech District. In terms of design, the building features a buff-colored brick exterior and decorative elements throughout including molded terra-cotta fleur de leis, spirals, and floral motifs. There is also a pair of towers with terra-cotta tile roofs, double Romanesque arched openings separated by spiral columns, iron balconets, and decorative diamond-pattern brickwork. The building was added to the National Register of Historic Places in 2002.

Now known as the Marquette Tower, the former Marquette Hotel was built in 1928 and continues to be one of the city's primary landmarks thanks to its Spanish Colonial Revival architecture. 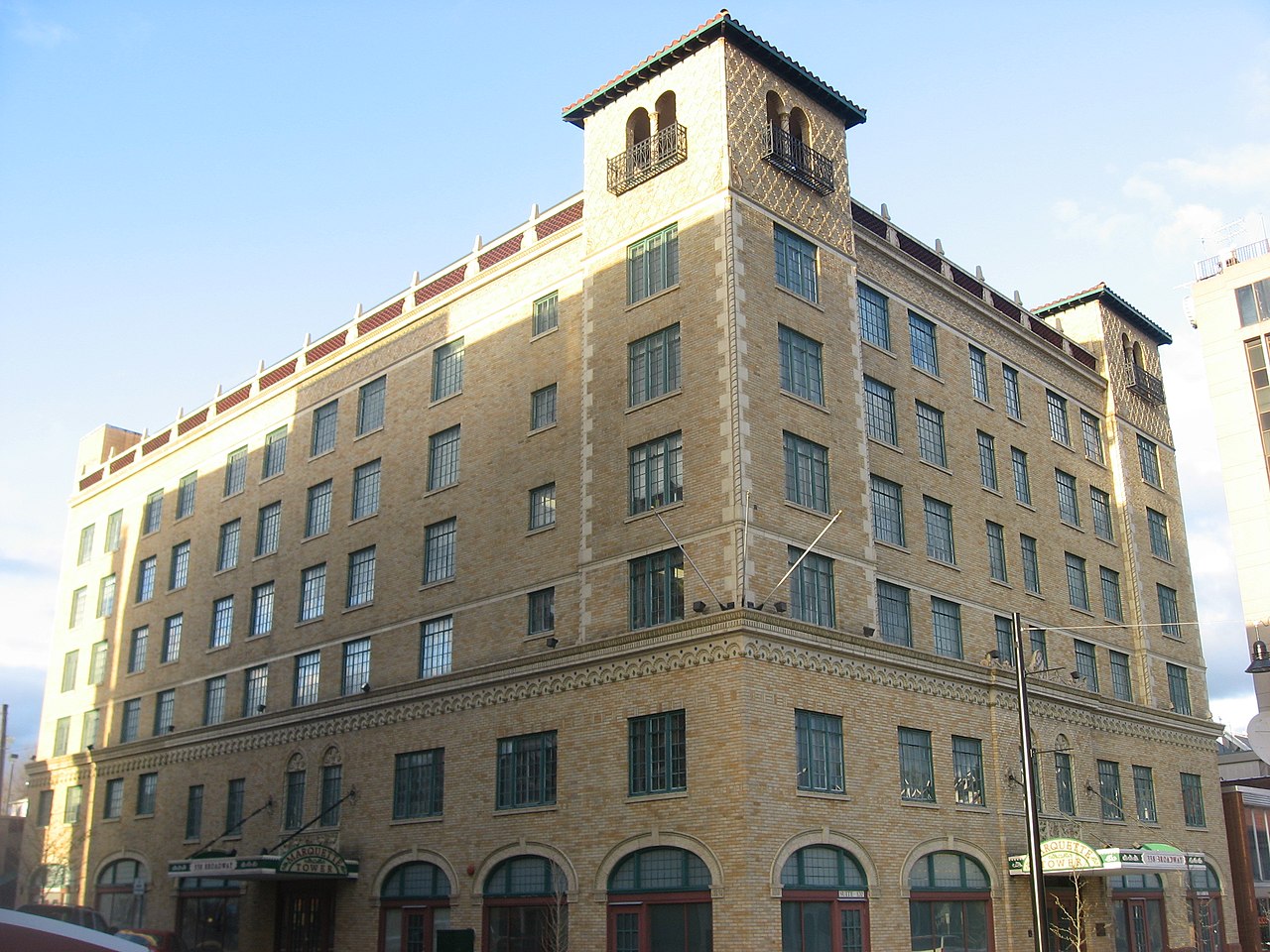 The first hotel in Cape Girardeau, a small single-story structure, was built in 1806 and was located at Themis and Main Streets. The next one, the St. Charles Hotel, was built around 1838 and then the Riverview Hotel was constructed two blocks away in 1857. Both offered luxurious accommodations. Cheaper hotels were built in the 1800s as well. Three hotels were erected in the early 1900s but two burned down in 1916. It is likely that this is why the Marquette Hotel was built.

Construction of the Marquette Hotel began in July 1927 and was completed in November the next year. The grand opening celebration was a big event. A few hundred guests were invited but a throng of around 8,000 people came to celebrate and stood outside. Hotel staff were dressed in Spanish costumes. A drum and bugle corps marched down Broadway Street before the 8pm start of the festivities. People were given tours of the building and the first guests stayed that night. The name Marquette was either chosen to honor French priest Jacques Marquette who explored the area, or the Marquette Cement Manufacturing Company, or to honor an early Spanish explorer named Marquette. The rooftop initially had gardens and people were allowed to see it and take in the views of the surrounding area (the hotel was the tallest building in the city at the time).

The hotel quickly became a popular social gathering place for the community. Weddings, receptions and other events were held here thanks in part to the skilled chefs employed at the hotel. Local organizations including the Rotary Club and the Lions Club held meetings here until the late 1960s. The first radio station in the city, KFVS, operated from a glass booth on the mezzanine and was the city's only radio station for some time. Prominent figures of the day stayed at the hotel including Eleanor Roosevelt.

The hotel was expanded in 1936 to increase the number of rooms by 40. However, the Great Depression affected the hotel's bottom line and the owner was forced to sell it in December of that year for far less than what it cost to build it. By 1951 business improved greatly. The new owner renovated the main floor as well as the coffee shop and restaurant. New heating and cooling systems were added as well. The hotel was sold in 1969 and the new owner moved his family into the building and used the lobby as a piano and organ studio but continued to operate the hotel as well. Just two years later, however, the Board of Health condemned the building, forcing the hotel to close. The family lived in the hotel until the mid-1970s and the piano store operated until the late 1990s. The old hotel was condemned again in 2000 but reopened as the Marquette Tower in 2004 after two years of renovation. In the mid-2010s it became part of a Marquette Tech District and now houses offices and businesses including a coffee shop and a rooftop restaurant.