The First Lutheran Church is the most recently constructed of Chambersburg’s three “rose rent” churches (behind The Presbyterian Church of Falling Spring and Zion Reformed Church), its congregation having completed construction on the current church well after its companions. The congregation has occupied the land upon which the current church stands for much longer, however, having received its deed to the land from town founder Colonel Benjamin Chambers in 1780 (the same year in which Zion Reformed Church reached its own agreement and thirteen years after Falling Spring’s). Between that time and the year of the current church’s construction, the congregation used two other buildings as its houses of worship at the same site. The first was a two-story log building the Lutherans shared with the local Reformed congregation until 1808 and the second was a brick structure for the Lutherans’ sole use. It was in this building that the congregation of the First Lutheran Church came to serve as the epicenter of a theological debate that raged within American Lutheranism for much of the early nineteenth century as a result of the Great Awakening. For two years during this period (1831-1833), the Reverend Benjamin Kurtz, a proponent of progressive change in the Lutheran Church as the editor of the Lutheran Observer and later founder of Gettysburg Seminary and Susquehanna University, served as the congregation’s minister. While there, Kurtz experimented with a number of new policies, policies (like English-language worship) that drove a portion of the congregation to establish the Second Lutheran Church in protest but ultimately went on to become cornerstones of the doctrinal reforms he advocated for within Lutheranism. First Lutheran Church remains in operation to this day and is accessible during regular worship services and upon advanced request.

Side view of the First Lutheran Church, faced in red brick with symmetrical features in classic George style. Courtesy of Find-A-Grave. 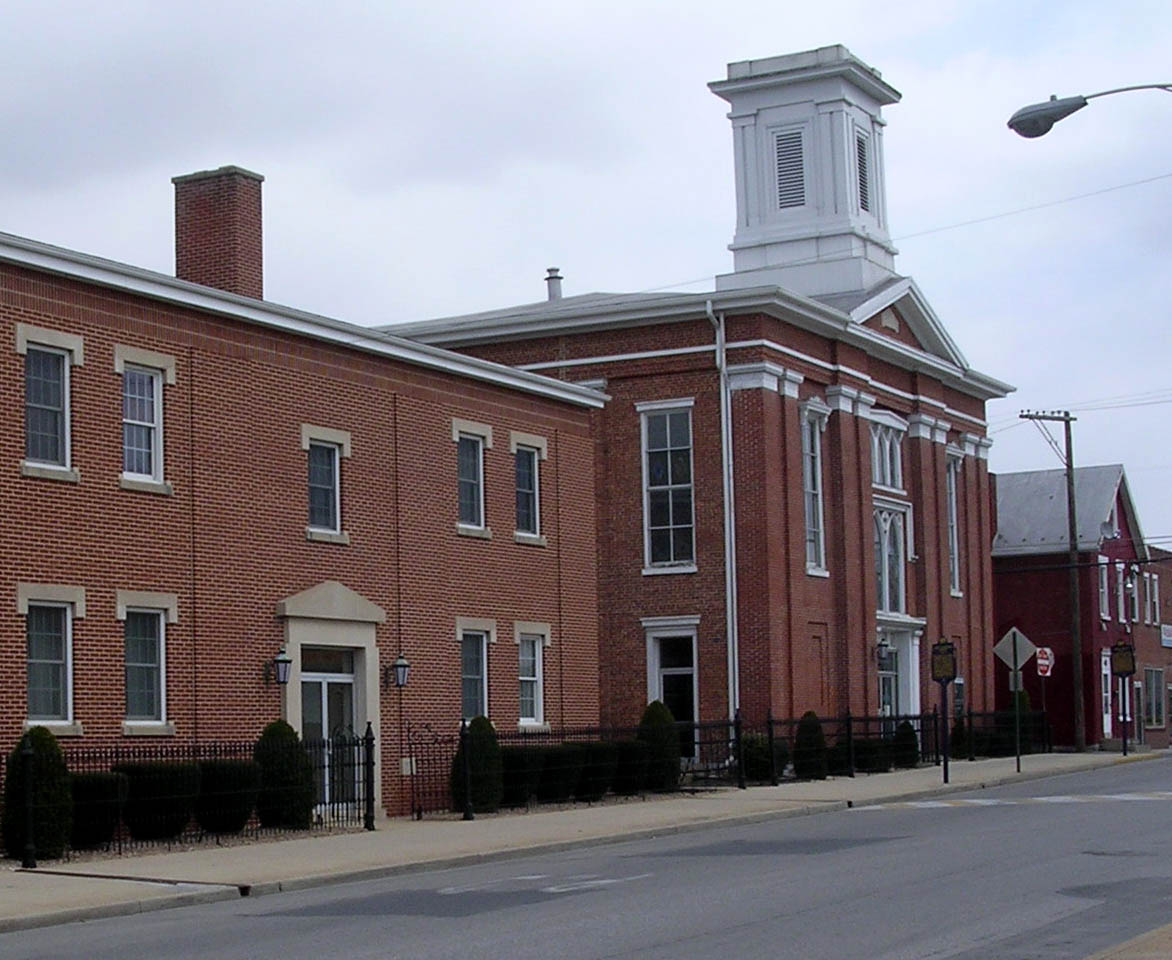 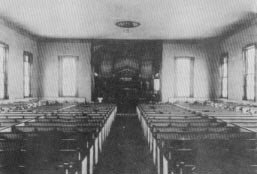 For the first several decades of its existence the congregation of the First Lutheran Church shared their house of worship with the local Reformed community, a two-story log building that the Lutherans replaced with a larger brick one after the Reformed congregation stopped using the site in 1808. This structure lasted until 1854, when the congregation completed construction on a larger building that remains in use to this day. The structure’s red brick exterior remains in largely the same condition, as does the prominent tower toward its front. The congregation made significant changes to other features of the church in the 1950s, however, renovating the interior of the church to enlarge the chapel, repurposing an adjacent former high school as a parish hall, and connecting the two with a new building known as Memorial Hall. Still, while there may have been significant architectural changes to the church over the course of its history, it’s the changes to the congregation itself that have been most impactful. The Reverend Benjamin Kurtz’s time as minister of First Lutheran Church from 1831 to 1832 is at the root of these changes, an era during which the congregation experienced both considerable internal conflict and substantial growth in its membership. Those experiences may have placed First Lutheran firmly at the forefront of nationwide reform efforts within the Lutheran community during the Great Awakening, but the church is remembered for different reasons around Chambersburg. Rather than Benjamin Kurtz, the Benjamin most associated with First Lutheran around town is Chambers, who deeded the land for the church to the congregation in a contract unique to the area known as a “rose rent” agreement.

The congregation of First Lutheran Church negotiated their “rose rent” agreement with Chambersburg’s founder Colonel Benjamin Chambers in 1780, the same year that Zion Reformed Church received a similar deal and thirteen years after the first made with The Presbyterian Church of Falling Spring. In the agreement, First Lutheran committed to delivering a single red rose to Chambers, his wife Jane, or one of their descendants every June in perpetuity as payment for their lease (Chambers evidently chose the rose because the symbol appeared on his family crest). After obtaining the land, located on what is now Washington Street, the congregation of First Lutheran Church constructed a two-story log building that it shared with the local Reformed congregation. The Lutherans gained sole control of the site in 1808 and completed construction of a brick replacement for their log church shortly thereafter. They remained in that building until 1854, when they built the current structure. With the exception of a few major events much of the church’s history during this period is unclear, primarily as a result of the destruction of the congregation’s records, stored in the Franklin County Courthouse for safekeeping and destroyed in the Confederate burning of that building and much of the town in 1864.

While the “rose rent” contract may have cemented First Lutheran’s place in local history, however, it was the course of events half a century later that ensured the congregation’s place in national history as well. In 1831, after two years without a minister, First Lutheran convinced the Reverend Benjamin Kurtz (who had been ministering to Lutherans in Hagerstown, Maryland since 1815) to accept a position as their pastor. Kurtz would go on to become a prominent leader within the movement to reform Lutheranism in the early nineteenth century to reflect the changing mores of life in the United States. After leaving his position at First Lutheran, Kurtz went on to serve as editor of the Lutheran Observer (a progressive Lutheran newspaper) until his death in 1865. As part of his efforts to reform Lutheranism during this period, Kurtz also helped found the Gettysburg Seminary, Susquehanna University, and the General Synod (the first national Lutheran organization in the United States). While these institutions may have represented the realization of Kurtz’s vision for a Lutheran Church that was more responsive to changes in society, the First Lutheran that emerged from his ministry is one of that vision’s earliest expressions. During his time at First Lutheran, Kurtz experimented with a number of changes he hoped to one day implement throughout the denomination. Most notably, Kurtz began conducting services in the English language (rather than the traditional German). His decision to do so drove a portion of the congregation to leave the church and form their own, the Second Lutheran Church. The large majority of Lutherans in the town, however, supported the change and the congregation grew substantially over the course of Kurtz’s short time as its minister. In 1833, Kurtz’s poor health forced him to resign his position in Chambersburg in favor of the less taxing one as editor of the Lutheran Observer.

Despite his relatively brief stay in Chambersburg, Kurtz’s involvement at First Lutheran propelled the congregation to the forefront of the contemporary conversation within the denomination about the reforms advocated by men like Kurtz. Kurtz and his compatriots represented the forces of change within American Lutheranism in the early nineteenth century, a group of likeminded pastors who supported the more evangelical version of the faith introduced by the Great Awakening. While the switch to English-language services became the epicenter of the conflict between reformers like Kurtz and their more traditionalist opposition, the issue was only one of a number of prominent points of contention. Over the course of his career, Kurtz advocated not only for English-language services, but for a shift away from the early confessional writings of Martin Luther as well. Kurtz also adopted a more enthusiastic speaking and writing style and encouraged a sense of revivalism in his religious services, behavior that was directly rooted in the revivalism of the Great Awakening. This religious movement, inspired by English preacher George Whitefield’s tour of the North American colonies in the mid-eighteenth century, wrought changes within nearly every Christian denomination across the continent that continued to impact congregations like the one at First Lutheran for well over a century. The church’s unique status as a laboratory for one of the most prominent reformers to come out of Lutheranism’s Great Awakening thus connects it to some of the most impactful historical processes in the nation’s past.

As a “rose rent” church, First Lutheran Church stands as a testament to the importance of local history and traditions to a sense of community. As a window into the religious upheavals of the early United States, it reflects the often porous nature of the divide between that community and the national stage. By bringing that upheaval to First Lutheran’s front doorstep, Benjamin Kurtz ensured that the conflict and compromise taking place on a larger scale throughout the country found their way into the lives of the congregation in Chambersburg and wrought irreversible changes. Visitors to the church can thus look forward to engaging with a site that not only has deep roots in the area’s past, but extensive connections to the history of its nation as well. Interested parties may explore the church’s grounds on Washington Street during regular religious services or upon advanced request.