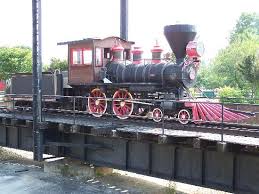 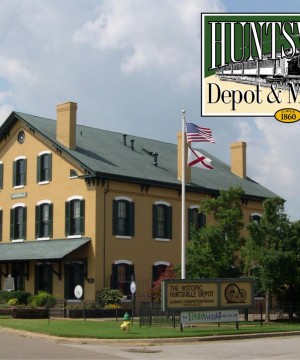 The Huntsville Depot Museum offers visitors a glimpse of life during the construction and operation of the railroad. Functioning as part of the Early Works Family of Museums, the depot offers guided tours that educate visitors about life on the railroad. The depot itself is a symbol of Huntsville's transportation history as it played a major role in the development of rail travel and the city itself.

Created by The Memphis & Charleston Railroad Company in 1860, the Huntsville Depot became part of the company's Eastern Division Headquarters. The headquarters continued to grow and expand, and other buildings were added to improve its functionality.

"by the late 1860s, the headquarters included the depot, a freight station, a 13-bay roundhouse with turntable, an engine house, a car shop, and a machine shop."4

The depot building itself contained many types of rooms such as offices, restrooms, baggage rooms, and bunk rooms for employees.

The Huntsville Depot was a vital Confederate rail link during the Civil War. On April 11, 1862, the depot was captured by Union forces, resulting in the imprisonment of 159 Confederate soldiers within the depot itself. The depot was returned to The Memphis & Charleston Railroad Company after the Civil War, but the company eventually went bankrupt, causing the depot to be sold to the Southern Railway System in 1898.

The Huntsville Depot remained in operation for many years after being purchased by the Southern Railway System. It was renovated in 1912 and was operated as a passenger station until 1968. The building was placed on the National Register of Historic Places in 1971.

Wednesday-Saturday 10am-3pm Closed: Thanksgiving, Dec 24 & 25, all of January Limited hours first 2 weeks of May due to Whistlestop

Railroads and Transportation
Science and Technology