The 1881 sandstone building was one of the original structures in the Lyons townsite. It was originally a schoolhouse and currently houses the Lyons Redstone Museum. 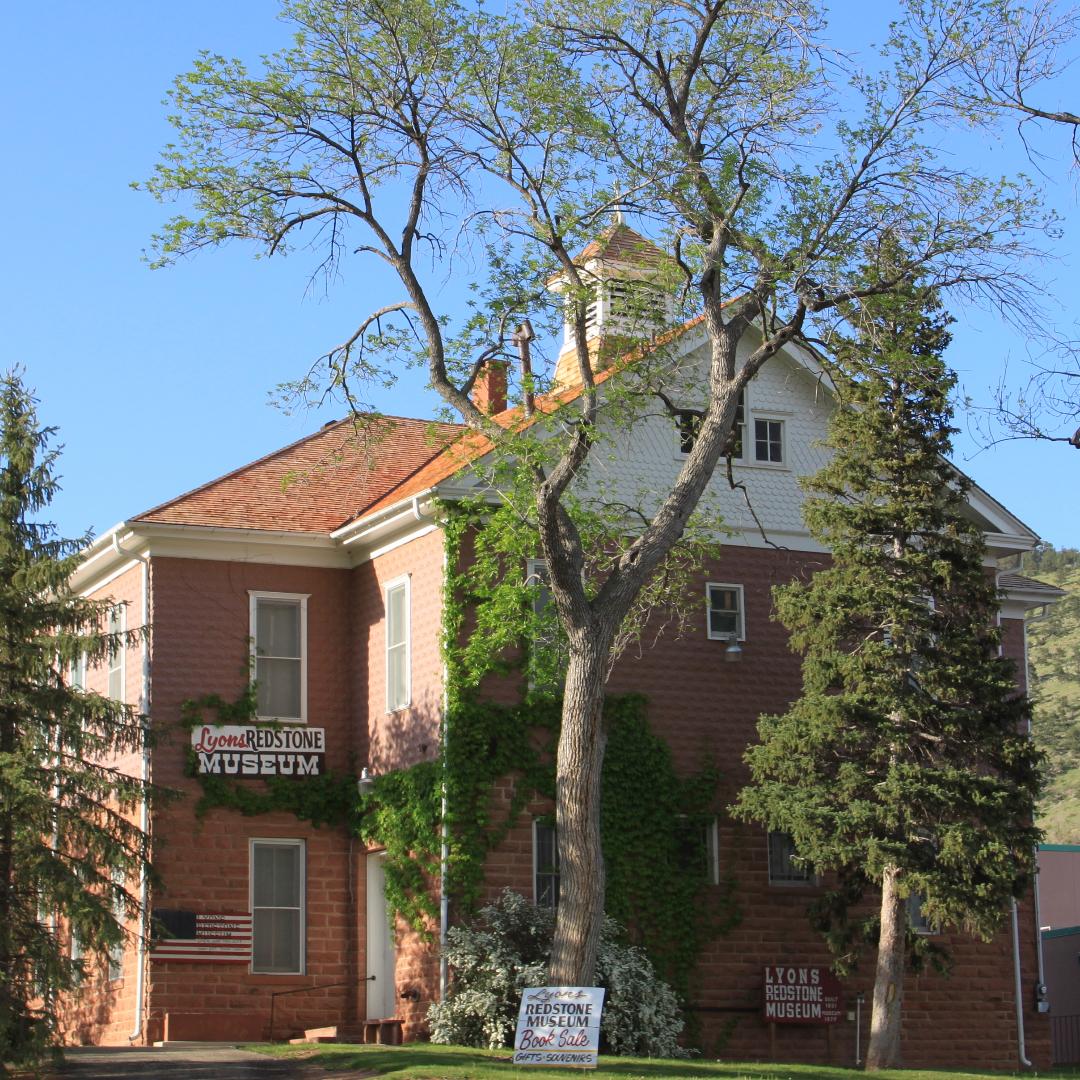 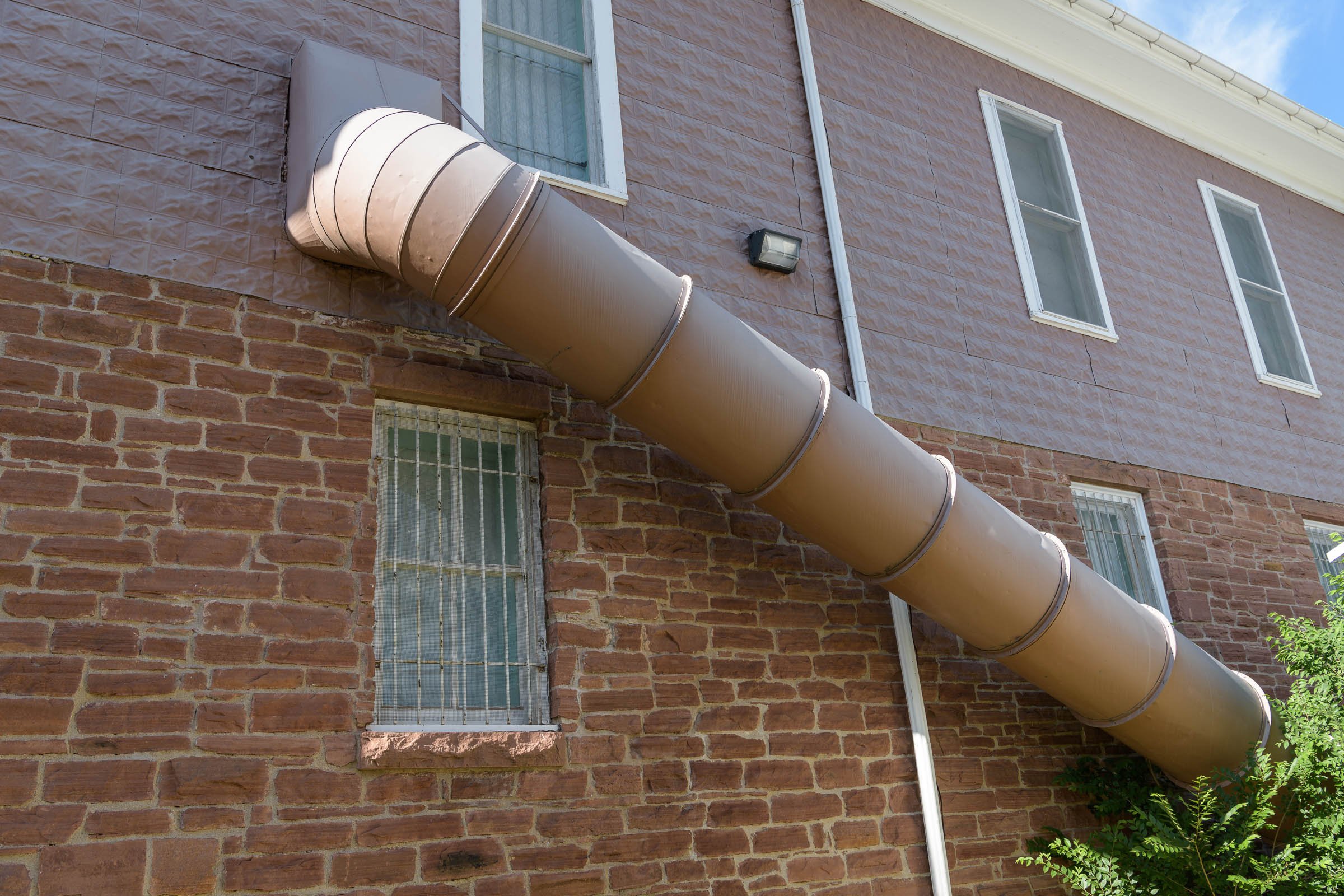 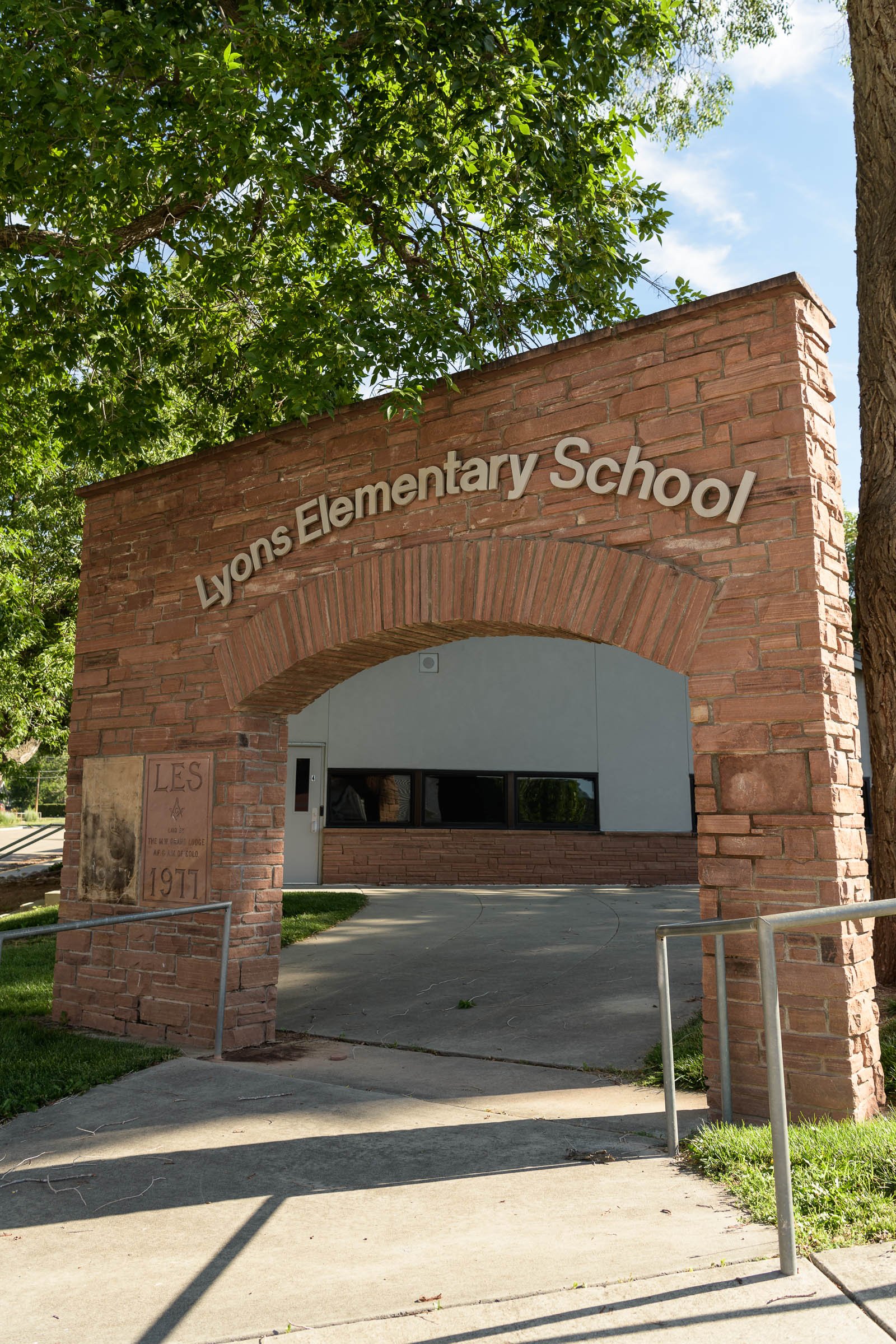 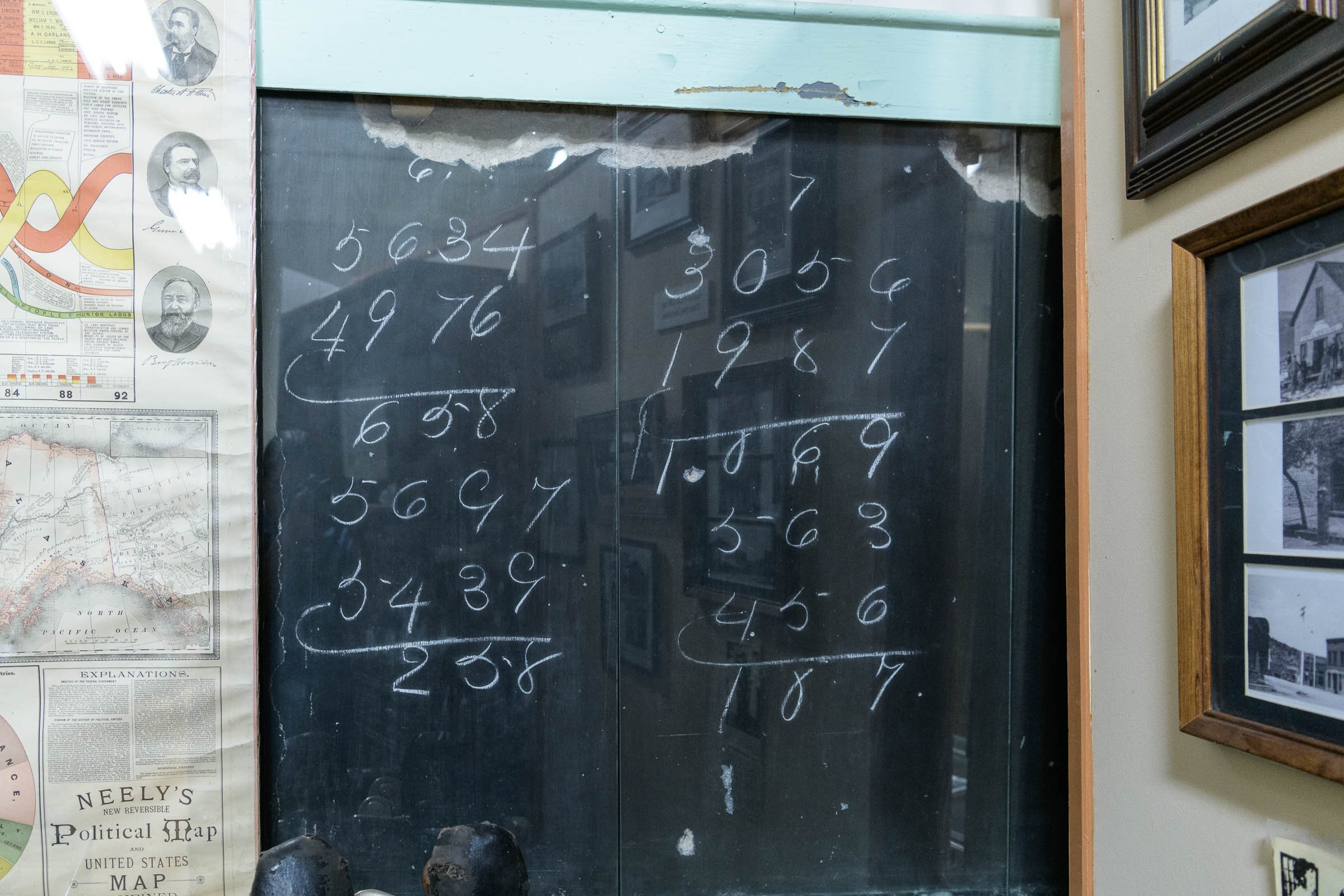 Photo of the schoolhouse in 1885. Photo courtesy of Lyons Redstone Museum. 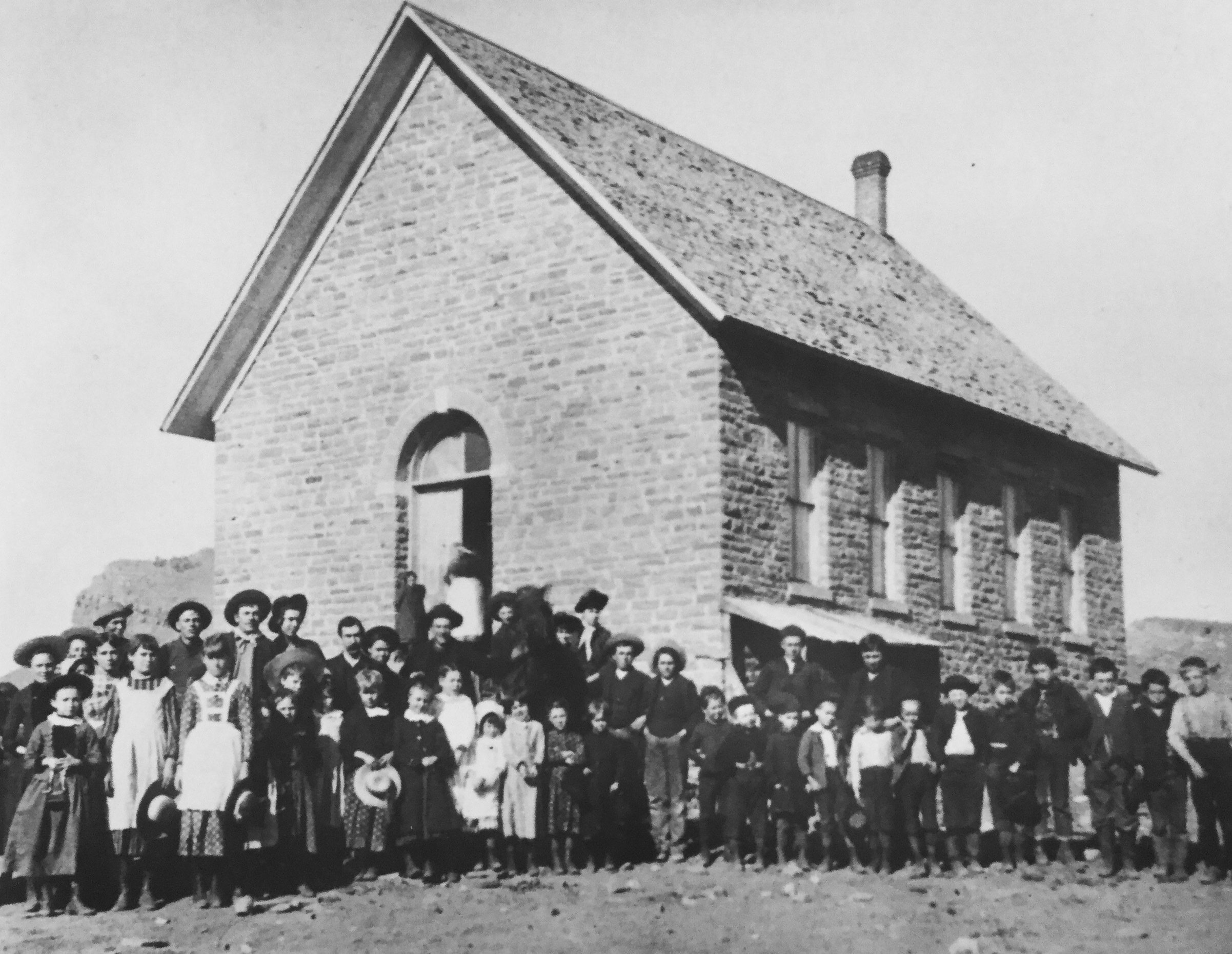 The schoolhouse was built in 1881 using sandstone donated by town founder Edward S. Lyon. It was one of the first buildings constructed after Lyon arrived in the area. He purchased 160 acres and began planning the townsite in 1882. The plans were modified by P.G Putnam in 1885, and the town was finally incorporated on April 10, 1891.1 In 1895, the school was expanded and a second story was added using wooden construction. It was braced with timbers on the east side. However, when the wind blew from the west, the upper story swayed. In 1902, the school board decided to remodel the building, expanding and reinforcing the top floor. The construction was completed in October of 1902. Four 30’x40’ classrooms awaited students at the start of the school year. The first floor of the building is locally quarried sandstone, the second floor of the building is tin-covered wood.

The building was used as a school until 1977. Many Lyons residents remember sliding down the metal tube fire escape during fire drills in the building and taking their school photos in front of the stone archway that used to be in front of the school. The archway was relocated to the bottom of the hill in 1993. Local stonemason Andy Maestas was hired to dismantle the arch and rebuild it in its current location.

As a new elementary school was being constructed, there were questions over what to do with the old building. The Lyons Historical Society began working to save the 1881 Schoolhouse from the wrecking ball in 1975. A three-way lease between the Lyons Historical Society, the St. Vrain Valley School District, and the Town of Lyons was signed in 1977.

Manuel Weiss, a historian, led the restoration process using funding from a CETA grant. While the building was being restored, Weiss noted that the east side of the building only had four windows, even though early photos show five windows. He could not discern any area that had been removed. The missing window is a museum mystery to this day.

During the restoration process, the slate chalkboards were removed. Underneath were the original chalkboards that were painted onto the walls. You can still find one student’s math equation that was preserved beneath the slate board in the first-floor exhibit room.

The grand opening of the museum was July 13, 1979, during the town’s Good Old Days celebration, and it was officially dedicated November 18, 1979. The first exhibit in the museum included 62 photographs of Lyons titled The Double Gateway - 60 Years in Review - 1885 to 1945.

The Lyons Redstone Museum was awarded $93,272.00 for restoration in 2006, and construction began in 2009. The Lyons Historical Society raised an additional $17,000.00 for the project. Their goal was to repair various features of the building, such as the roof while maintaining its historical integrity. As the renovation project was underway, several additional issues were found with the building. The Lyons Historical Society and Museum Director LaVern Johnson still work to continually raise funds to restore the historic building.

The Lyons Redstone Museum is operational thanks to grants and donations from the Lyons Community Foundation, the Scientific and Cultural Facilities District, the Town of Lyons, the St. Vrain Valley School District, and private donors. These funds pay for exhibits, programs, collection management, and museum operation while keeping the Lyons Redstone Museum operating and available to the public.  The Museum is open weekends in May, daily June through September, and by appointment during the winter.

Admission to the museum is free. Donations are welcomed.