The McAllister Saloon was one of the first structures built along what is now Main Street. It is a single-story building that was constructed by Hiram Sawyer in 1881. 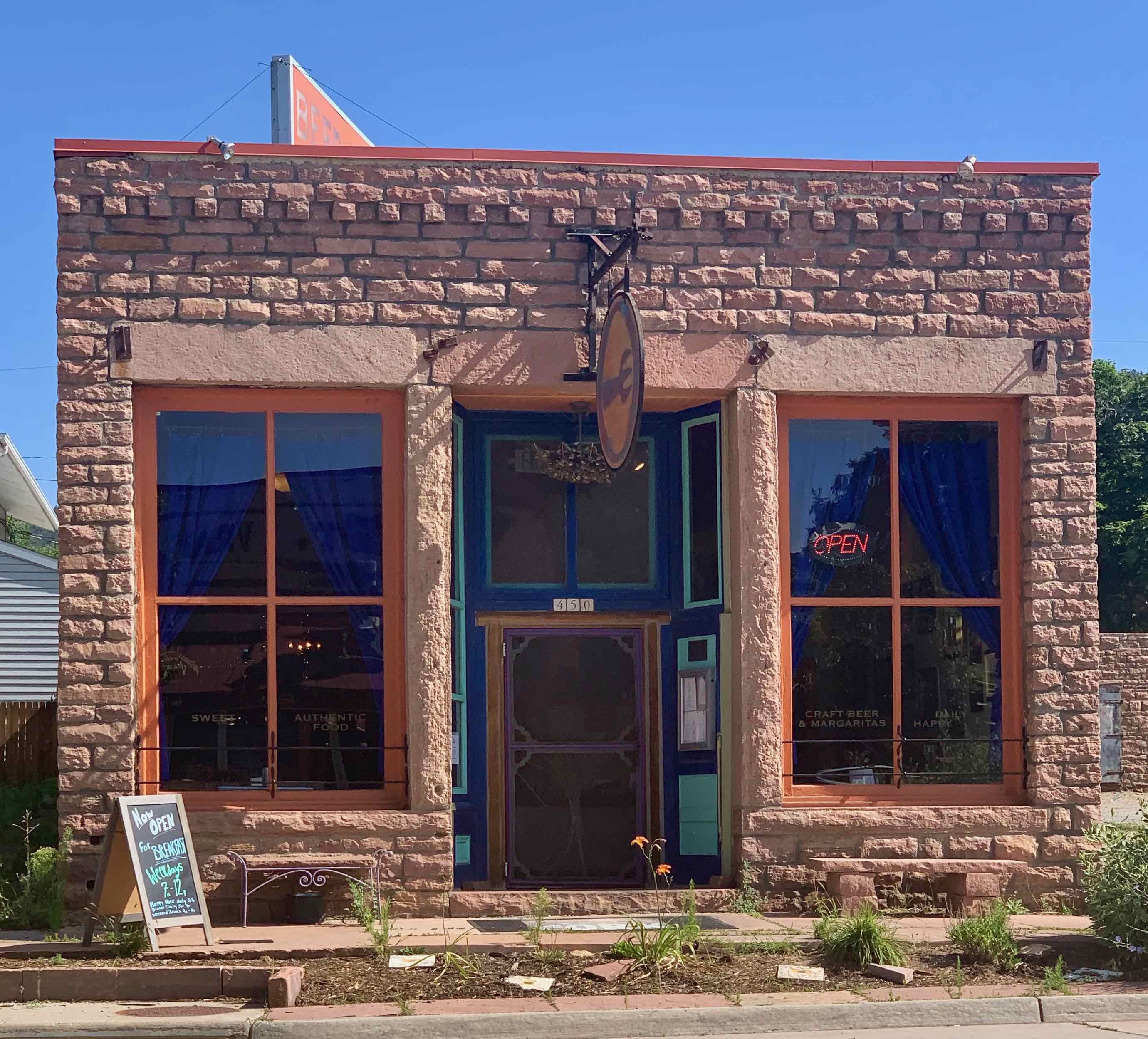 The interior of the N. Frank & Bros Meat Market. Photo courtesy of the Lyons Redstone Museum.

A historic photo of the interior of the N. Frank & Bros Meat Market. Photo courtesy of the Lyons Redstone Museum. 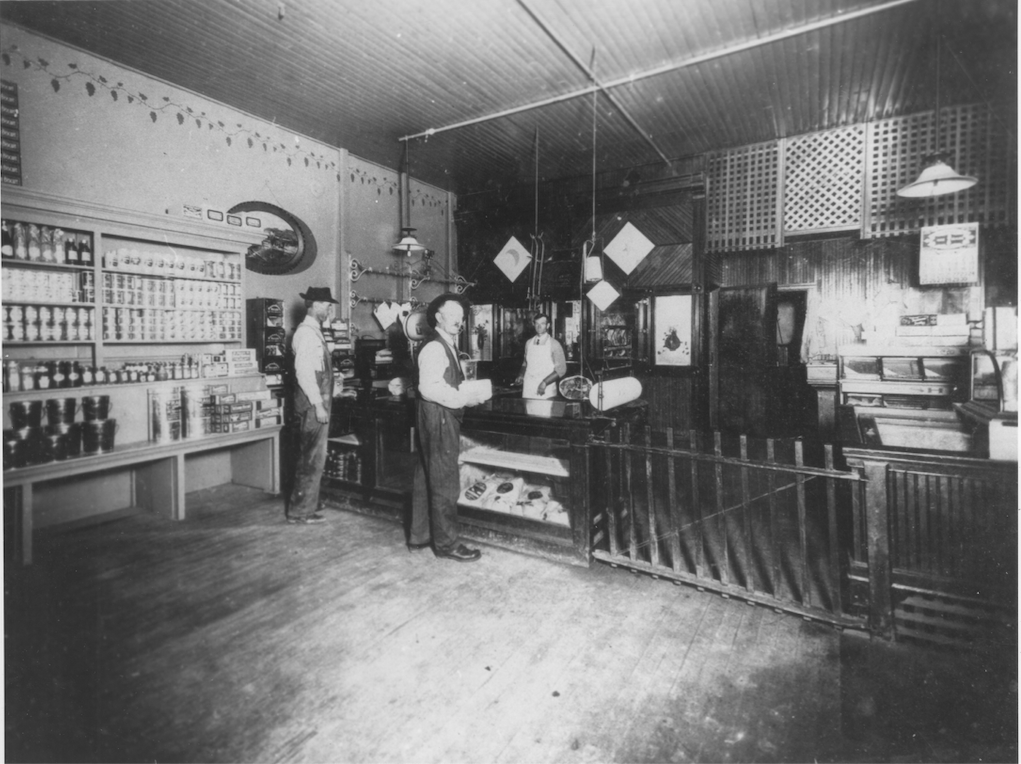 Newton Thomas mural on the wall of the McAllister Saloon (The Fork). Notice the bullet hole in the left side of the mural. Photo courtesy of Baiba Lennard. 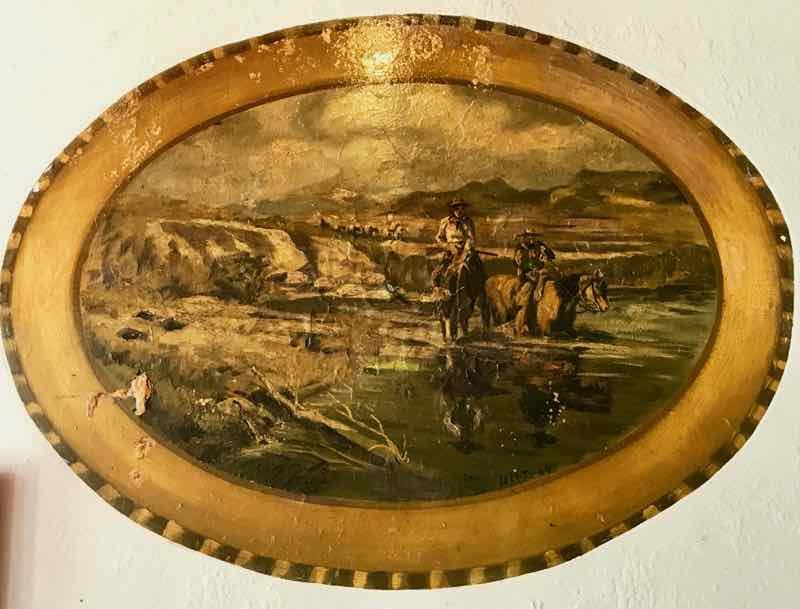 A second Newton Thomas painting on the wall of the McAllister Saloon (The Fork). Photo courtesy of Baiba Lennard. 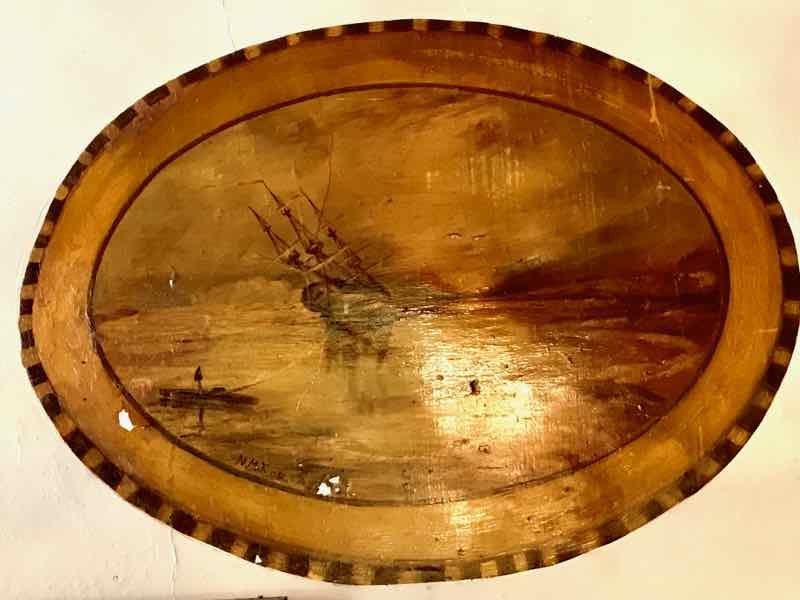 In 1881, Hiram Sawyer built a one-story sandstone building with a basement. The building housed McAllister Saloon for five years. Saloons were a common business in mining towns. “On the western mining frontier, the saloon was ‘the poor man’s club,' functioning to provide a social sphere for a man far from friends and family.”1 Many men were moving to the St. Vrain Valley area to work in the quarries. After the Denver, Utah, and Pacific Railroad built a narrow-gauge line to the quarries, business boomed. The quarries drew hordes of workers, even though the jobs came with major health risks. Historian Elliot West referred to saloons in the American West as “the social heart-center of the camp.”2

Single men who worked in the quarry would have gone to McAllister saloon for both a drink and for camaraderie. They may have been far from their homes without any family. They would have also been able to share information and news while sipping a whiskey or beer after a long day of work in the quarry.

Hiram Sawyer eventually lost interest in maintaining a business in Lyons and in 1886 the building and lot were sold to Thomas G. Putnam for $4.50 in back taxes.3 Then in 1890, Nicholas Frank purchased the building and turned it into a meat market. N. Frank & Bros. Meat Market offered dressed meat of all kinds from animals that were slaughtered at the Nicholas Frank homestead. Frank also owned and operated the Lyons Club Room which sold wine, liquor, and cigars.4

In September of 1891, Charles Bradford purchased the property and opened the Bradford Saloon. On December 20, 1892, John Kearney and Thomas Walen finished a days work at the Hugh Murphy Quarries in Noland and headed into Lyons with their pay. After drinking and gambling, they headed to the Bradford Saloon in the early hours of the morning. John Kearney sat down for a game of poker. At four o’clock in the morning, William C. Watt arrived having left Bucherdee’s Saloon. It was reported that Kearny drank seven hot whiskeys in less than twenty minutes. John Kearney and William C. Watt played a game of poker, though both men were so drunk that they had to have another man deal the cards for them. Kearney was winning. After John Kearney won yet another hand, William Watt pulled out his .38 Smith & Wesson and pointed it at Kearney. The gun went off but missed Kearney. Watt shot two more times while others tried to stop him. Kearney was taken to the local doctor with a bullet wound in his left groin. The doctor removed the bullet, but Kearney died on December 28, 1892, from an infection. William C. Watt was arrested, charged, and convicted of voluntary manslaughter. He was sentenced to eight years in the State Prison at Canon City.5 You can still see the bullet hole in the Newton Thomas painting of the two men on horseback.

In May of 1901, Bradford sold the building and lot to Charles and William Frank. There were several legal battles over the land between Elisha S. Johns, F.D. Sandy, J.H. Gilfillan, A.C. Van Deren, and Nicholas Frank. On June 19, 1909, William and Charles Frank claimed full rights to the building and the lot.5