Former Site of the University Armory

Once located at the edge of what is now the Mountainlair Green, the Armory building on High Street was the second such structure on West Virginia University’s downtown campus. Built at the turn of the twentieth century, the second university Armory was a considerable upgrade from the first (which stood at the approximate location of Oglebay Plaza and became an experimental station for the College of Agriculture after 1889). The university Armory was the primary headquarters, storage facility, and training ground for WVU’s Corps of Cadets, formalized along with other such organizations nationwide as the Reserve Officer Training Corps during World War I. It was during that conflict in particular that the Armory on High Street experienced its heaviest use, a period in which the entire campus essentially became a military camp as WVU (like many other such institutions) worked to meet the escalating demands of the federal government for trained military personnel. The Armory was demolished in the 1960s to make way for the ambitious construction project that became the university Mountainlair and adjacent Mountainlair Green.

Armory Hall in 1911, shortly after its construction. 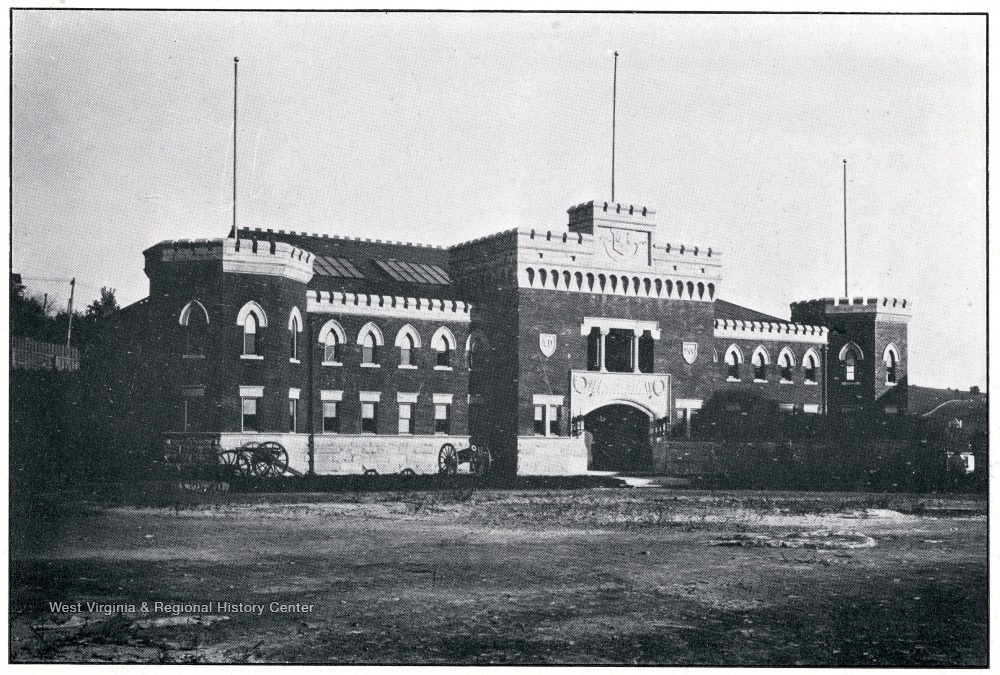 Original Armory Building in 1875 at what is now Oglebay Plaza. 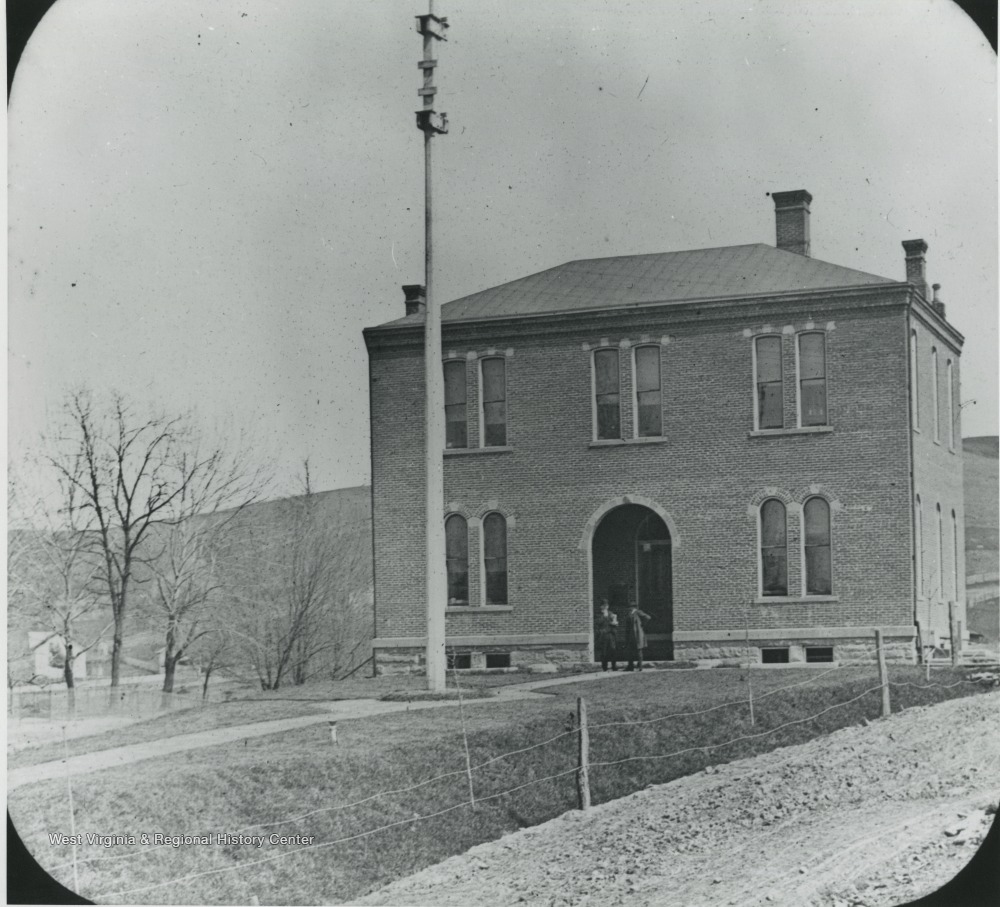 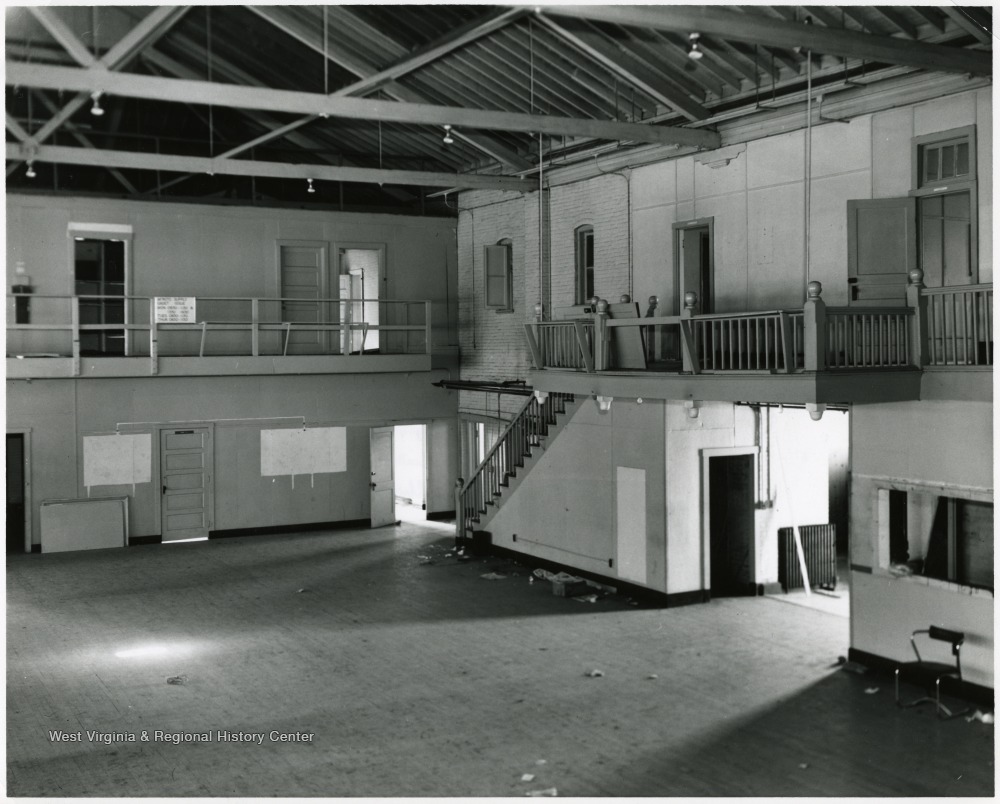 Cadet drill in 1913, a few years before the Armory's highest period of activity in World War I. 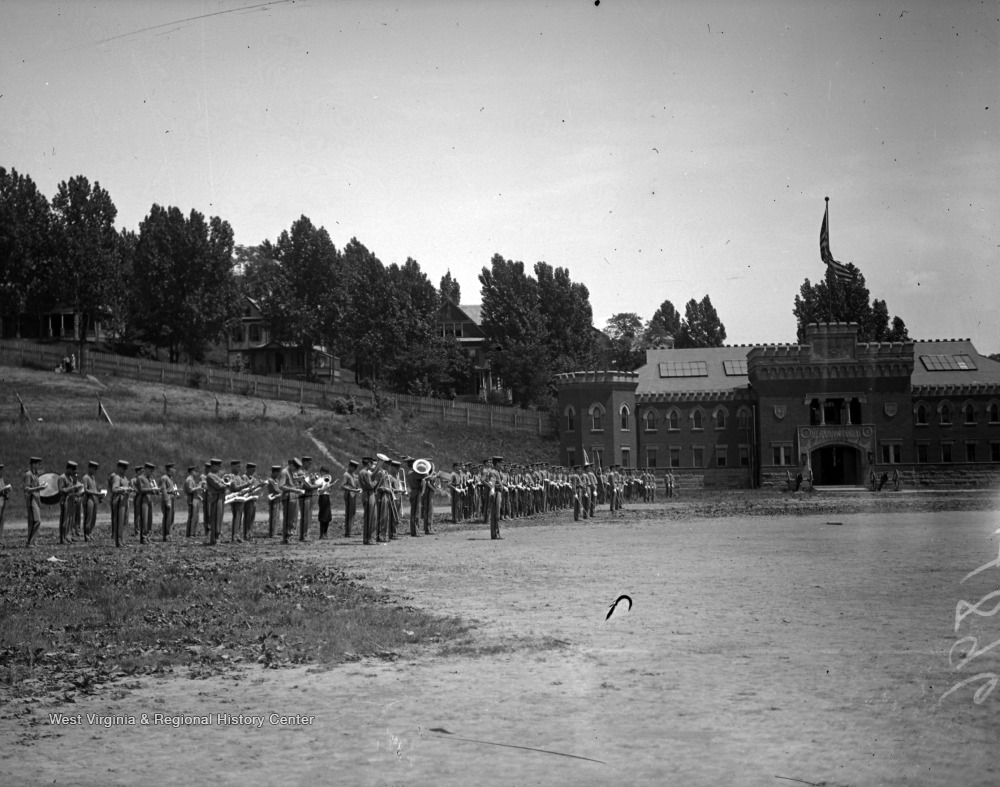 West Virginia University has had a military training program for the entirety of its existence. As a land grant university, WVU was required under the terms of the 1862 Morrill Act signed into law by President Abraham Lincoln to teach courses related to agriculture, the mechanical arts, and military tactics. So, when the Agricultural College of West Virginia was established in 1867 (renamed West Virginia University the following year) the new school included provisions for a Corps of Cadets. For the first of the Corps’ operation its membership included the entire student body, members of which were required to take classes related to the military sciences as a prerequisite of graduation. By the 1870s, however, the university abandoned this policy in favor of voluntary enrollment in the Cadet Corps, a decision that remained in effect until the outbreak of the First World War.

In the same decade that the university loosened its approach to cadet enrollment, it also provided for the construction of an armory so that the corps’ equipment and supplies could be adequately stored. This first armory, constructed in 1873, was a relatively simple, two-story block structure that stood at the approximate site of Oglebay Plaza. Because the structure was intended for storage purposes only, cadets could not utilize the space for training during rainy weather. Instead, they occupied the hallways of nearby Woodburn Hall. Both buildings served the various needs of the Corps of Cadets until 1889, when the College of Agriculture assumed control of the first Armory for use as its Agricultural Experiment Station. The agricultural college expanded its use of the area further in 1918, when the university constructed Oglebay Hall overlooking this the first Armory as the new College’s new home. Meanwhile, after 1889, the Cadet Corps took its indoor trainings elsewhere. When the university completed construction on Commencement Hall that same year cadets began training in the new building’s basement gymnasium. Once located on the northern side of Stewart Hall, Commencement Hall was renamed Reynolds Hall in the 1940s and demolished along with the second Armory to make way for the Mountainlair.

The second Armory, built along High Street overlooking the downtown campus at the turn of the twentieth century, was a result in large part of the state legislature’s decision to increase the university’s number of authorized cadets and incorporate the Corps into the West Virginia National Guard. This prompted many within the legislature and university to consider an expanded facility for storage and indoor training a growing necessity. So, when the new Armory was completed for the cost of $25,000 (over $680,000 today) its considerably larger size was a reflection of that perception. The new Armory was, like its predecessor, a two-story structure but was over twice the original’s width, with balustraded ornamentation along the roof and two round towers on either end at the building’s front. This facility provided space not only for storage, but room for classes and indoor drill as well. Still, while this facility represented a significant upgrade from the first Armory, its capacity would be sorely tested with the outbreak of World War I.

During that time period, West Virginia University became, in effect, a military training camp. It was by no means alone in this regard. Throughout the conflict, university systems across the country struggled to meet the needs of the U.S. military as its funneled American soldiers overseas to the frontlines of Europe. In 1917, the first year of American involvement in the conflict, the War Department asked cooperating colleges like WVU to accelerate the graduation of students trained in engineering, machine repair, and military tactics to serve the war effort. As a result, nearly all of the graduating class of 1917 entered the armed services immediately while the class of 1918 matriculated early (in December of 1917). All WVU students in this era were required once more to take classes in military studies, and in 1918 the university expanded its enrollment under the direction of the War Department’s Committee on Education and Special Training. The growing student body was housed in locations across the campus, including the Armory, the “Ark” (the former basketball building before the construction of Stansbury Hall after the war), and three temporary barracks along Beechurst Avenue. By the time hostilities ended in Europe in November of 1919, well over a thousand WVU students had been trained for action in that conflict.

When the second University Armory was demolished in the 1960s to make way for the Mountainlair and adjacent Mountainlair Green, the cadets that once walked its halls had served in four American wars (World Wars I and II, the Korean War, and the Vietnam War). While it no longer overlooks WVU’s downtown campus, its former site remains a testament to the impact of military conflicts on higher education and its students. Combined with alumni over 2,700 soldiers with ties to West Virginia University served in World War I, and somewhere in the neighborhood of half of that number trained at the Armory before being shipped overseas. Nearly fifty of that 2,700 lost their lives.