Center of the Universe/ Artificial Cloud

One of the most mysterious sites sought by visitors to Tulsa is the Center of the Universe/Artificial Cloud installation on the Boston Avenue pedestrian bridge downtown. 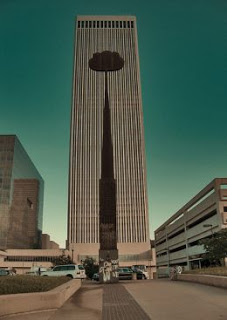 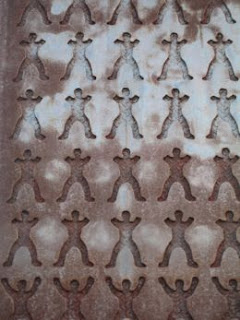 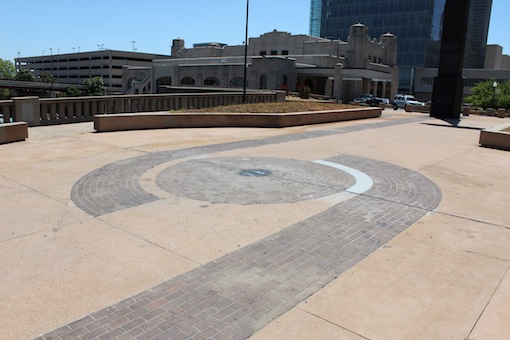 As you first walk across the pedestrian overpass at Boston and Archer in downtown Tulsa, this 8-foot diameter concrete and brick circle doesn’t look like much. The circle is located directly over the nearby train tracks, which rumble as freight carriers roll through town. Chances are, you’ve climbed the steps to get a closer look at the imposing steel cloud sculpture that looms above. To truly appreciate this circular cement wonder, you must first make a sound—speak, yell, shout, sing! Notice how distorted your voice sounds, even though everyone else inside the circle thinks you sound fine. Notice how you will hear the echo, but nobody standing outside the circle will hear that echo—perhaps because they will be too busy marveling at how distorted your voice sounds to them.

This unnerving acoustic anomaly has been entertaining Tulsans and visitors since it was first installed in 1991. Nobody is 100% certain how the “Center of the Universe” effect works. The best theory is that the planters around the circle help create a parabolic reflector that distorts sound coming from within it. At one time, the echo/distortion effect was more pronounced. When it was first built, visitors standing outside the circle would not be able to hear the person speaking at the center of the circle, or the echo of their words. The person in the center would hear a distorted version of their own voice and the echoes of a normal-sounding voice. As the architectural landscape around the site changed, the acoustic anomaly dampened and changed. Nonetheless, it is still pretty interesting.

The Center of the Universe is sharply punctuated by the impressive “Artificial Cloud” which looms over the circle. Crafted by Warm Springs Apache artist Bob Haozous, “Artificial Cloud” is a highly symbolic work about how humanity continually allows technology to ruin our relationship with nature. Haozous crafted the sculpture out of mild steel, and the installation is “meant to corrode, depending on the level of pollutants in the environment.” As it deteriorates from pollution, the sculpture enacts the Haozous’ prophecy of humanity’s self-doom. Haozous specifically chose the location of the bridge because the train tracks are the “demarcation line between the white Tulsa and the Black Tulsa…I said, ‘This is gonna mark where the races clashed. A reminder not only of the destruction of the environment…but also the spiritual destruction of mankind, with people, right there.’ They didn’t want to put it there.”

The lower base features steel rings that resemble shackles. These shackles have two main meanings. They represent the shackles that were placed on America’s indigenous peoples, as they were forcibly removed from their homelands and onto reservations.  They also represent how humanity increasingly shackles itself to technology. The four-sided center section features cut-outs of human beings, human hands, and airplanes in different patterns on each side. On one side, most of the humans lack hands, and some lack legs. The second side shows an organized grid of downward-pointed planes which begins to disintegrate into a chaotic tumbling toward earth in the lower rows. Another side shows the planes flying between the humans below and the cloud at the top of the sculpture. According to Haozous, the cloud perched atop the thin pillar “symbolizes a threatened hope.” Depending on the actions humanity undertakes in the next generation, the cloud could avoid further decay from pollution and remain aloft. This will only happen if we stop the destruction of our natural environment.

The Center of the Universe is a well-known landmark in Tulsa and has had a few pop culture appearances.  It appears in in a scene from Benjamin Lyttal’s novel, “Map of Tulsa.” The site has been documented in Teri French’s travel guide, “Tulsa’s Haunted Memories,” and P.J. Lassek’s “Oklahoma Curiosities, 2nd Edition.” Perhaps the most unusual cultural offshoot of the site is the annual Center of the Universe Festival. The 2-day music and street art festival began in 2013 and takes place each July in the Brady Arts District not far from the site.