The 1911 Pioneer Monument marks the end of the Smoky Hill Trail, which crossed the great plains from Kansas to Denver and served as the principal route for prospectors seeking their fortunes during the Pike’s Peak Gold Rush. Artist Frederick MacMonnies' original design sparked public controversy because it did not sufficiently celebrate white "civilization" replacing supposed Native savagery. MacMonnies compromised by replacing the Plains Indian warrior at the top of the pillar with a statue of Kit Carson. In 2020, the monument again sparked controversy, this time because it celebrated white cultural dominance. 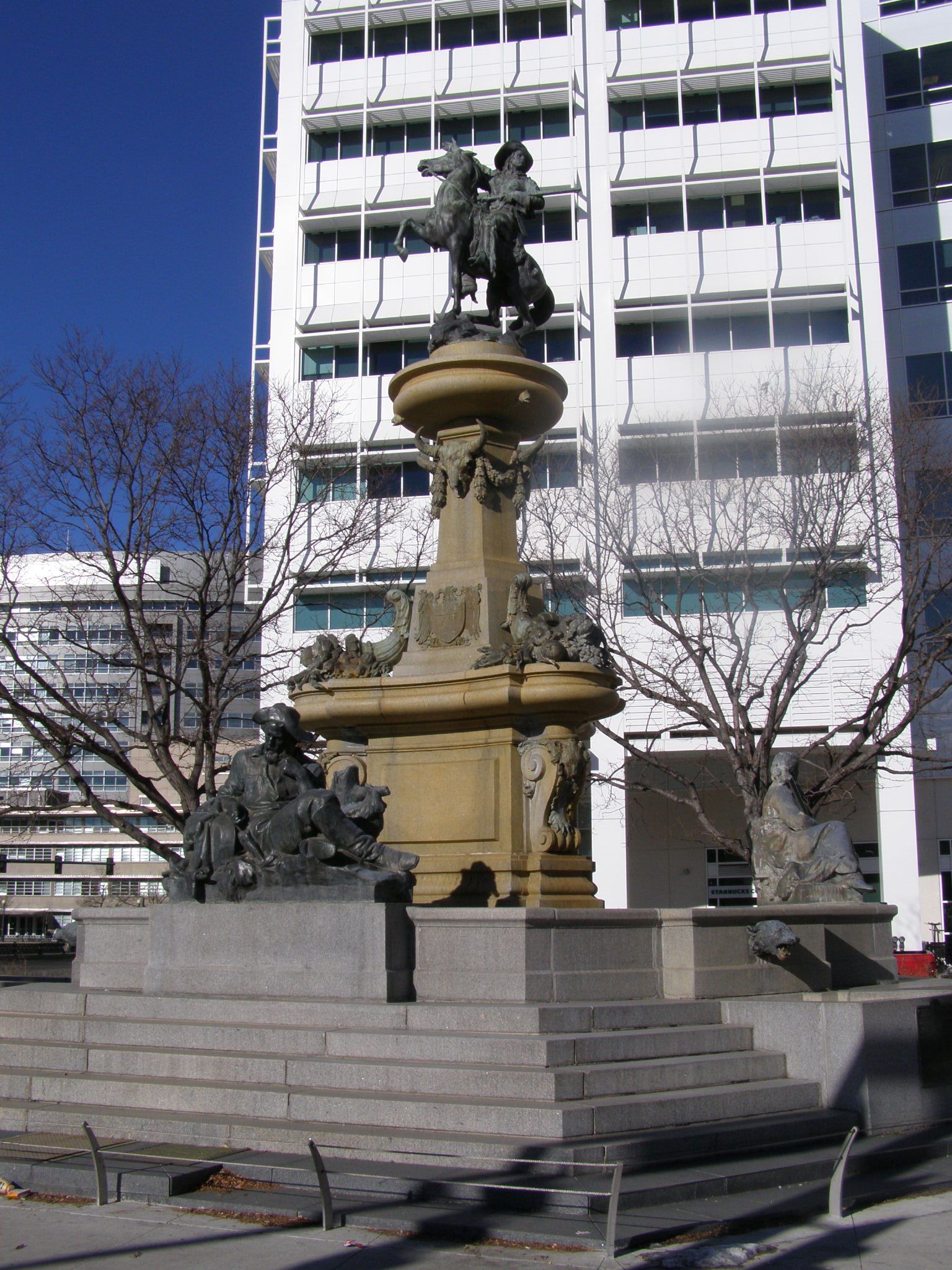 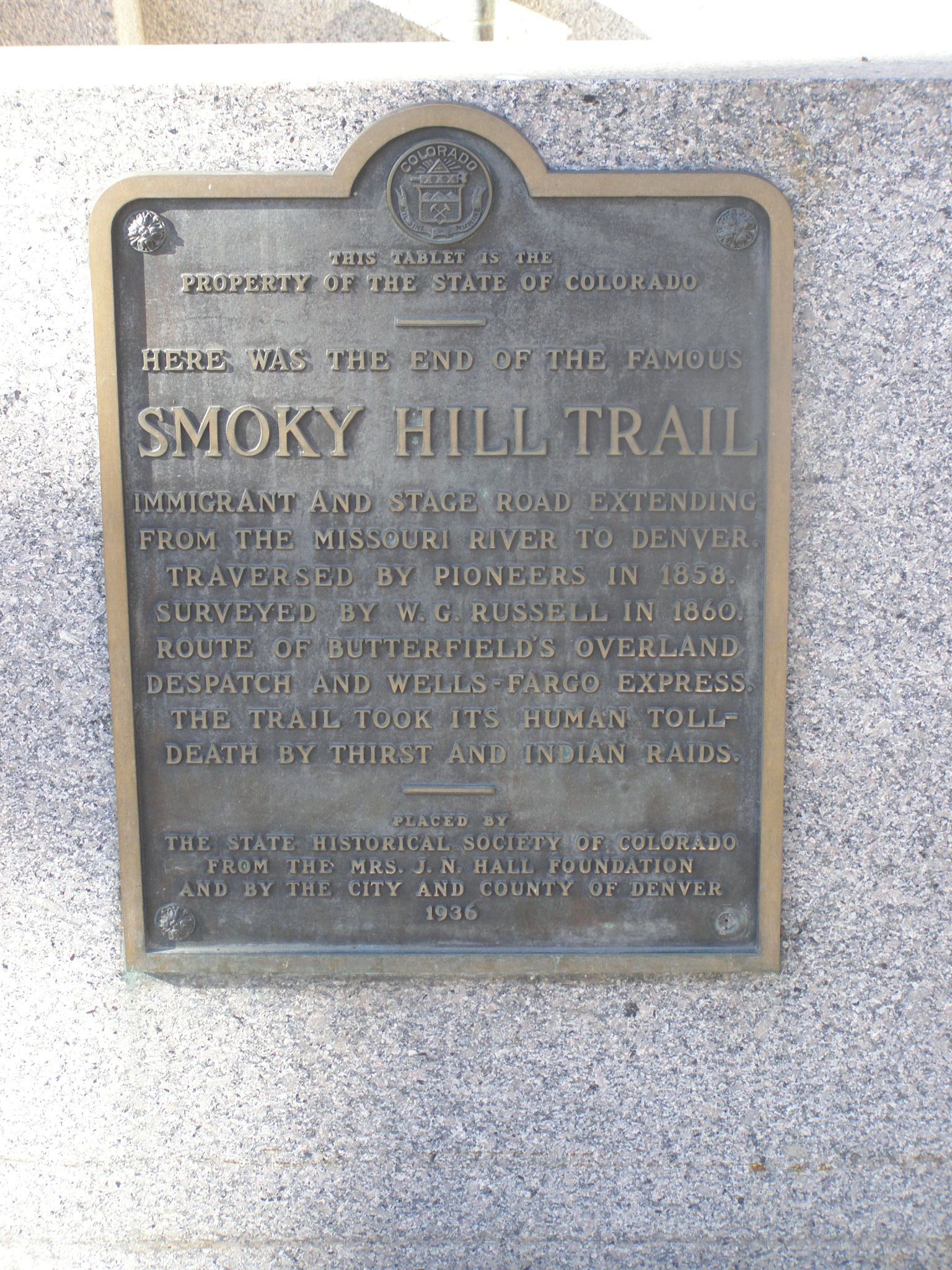 Cows along the Smoky Hill River in Ellsworth, Kansas. 1867 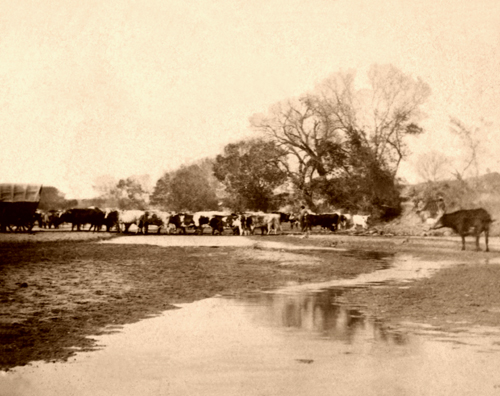 In September 2019, a protester covered the pioneer mother's rifle with an orange traffic cone. 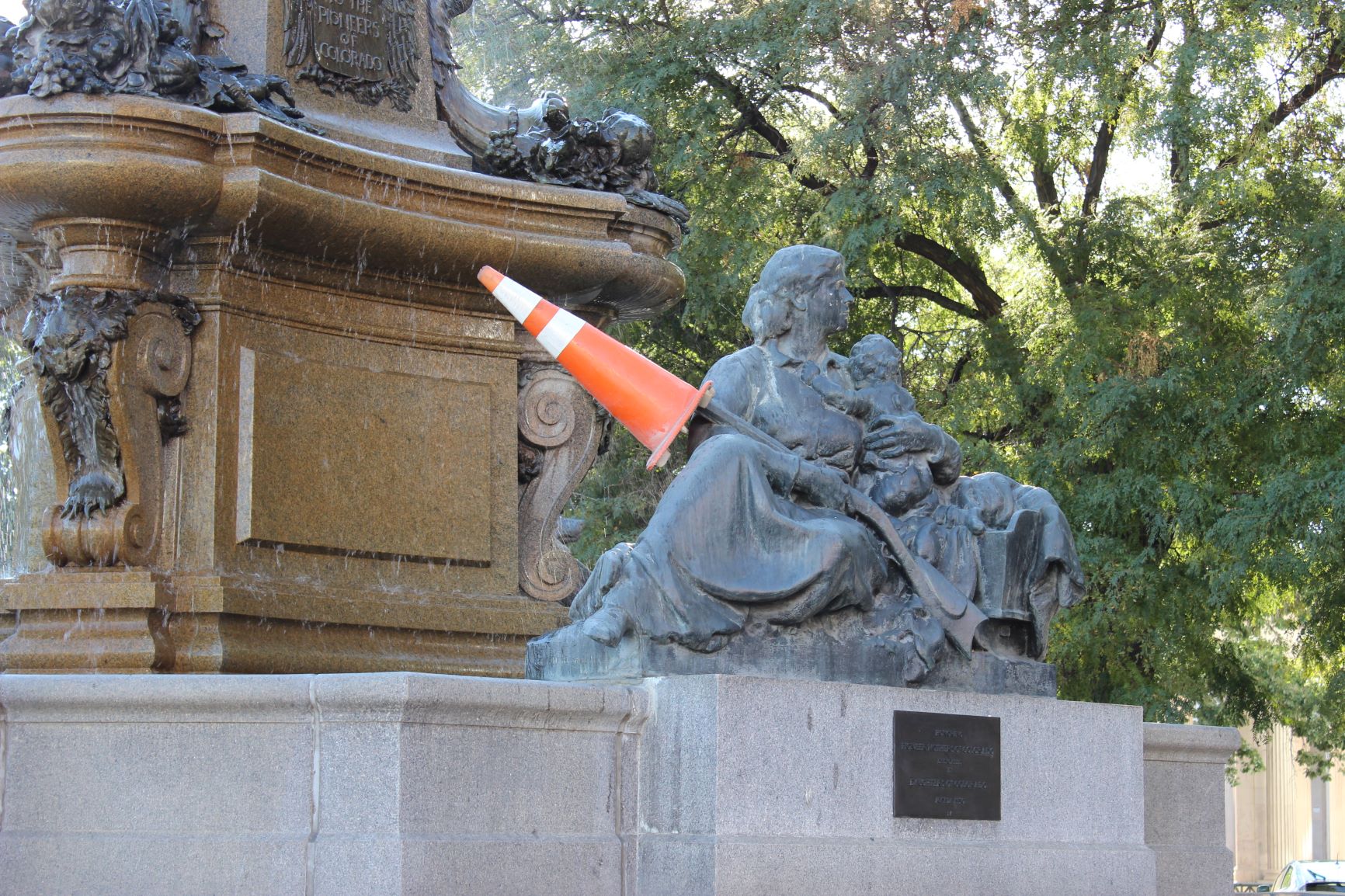 History of the Smoky Hill Trail

In 1859, prospectors found gold along Cherry Creek in modern-day Denver, and as quick as the word spread, thousands of prospectors began traversing the Rocky Mountains to seek their fortunes. However, there was no official path crossing Kansas, connecting the East to Denver. The westernmost traveling point at that time was in Salina, part of the Oregon Trail. To quicken the route to Denver and make it safer, surveyors and frontiersman began taking the ancient trail along the Smoky Hill River that was used by Native Americans.

Although the trail was substantially harder and more dangerous than other prairie trails from the Missouri River to the Rockies, thousands of would-be prospectors, homesteaders, and soldiers traveled the Smoky Hill Trail between 1859 and 1865. Among the dangers included attacks by local tribes and scarce water supplies. Many survived the trip nonetheless, traveling in covered wagons or on foot pushing carts and wheelbarrows. Others, however, were not so fortunate.

Stagecoach transportation to Denver was established by 1865, and during the trail’s heyday, many famous individuals followed its route to Denver, including Wild Bill Hickock, Wyatt Earp, and Buffalo Bill Cody.1

This tablet is the Property of the State of Colorado

Here was the end of the famous

from the Missouri River to Denver.

Traversed by pioneers in 1858.

The trail took its human toll -

Death by thirst and Indian raids.2

History of the Pioneer Monument

Denver business leaders hired prominent sculptor Frederick MacMonnies to sculpt a decorative fountain for the growing city in 1904. But when the artist’s design for the Pioneer Monument appeared in local newspapers, it sparked public outrage. Many believed it inverted what they assumed to be a God-given racial hierarchy. The sculptor explained that his

“idea in the design has been to make a gradual transition from civilization to savage life ... First, the Pioneer Settlers, Miners, Cowboys; then the Wild Animals; finally the Savage and the Buffalo (which are even now almost myths!), sacrificed to civilization and about to disappear forever into the Happy Hunting Grounds.”3

MacMonnies’ assumption that Native peoples and bison were dying off to make room for white settlement was typical of his era and accepted in local press coverage. The problem was that critics read the monument in the traditional manner, expecting the pinnacle of American Progress to appear atop the colossal central column, as it did in San Francisco’s 1894 Pioneer Monument. Instead, MacMonnies seemed to glorify the “savages” displaced by white settlers by placing a nude Plains Indian seated on a rearing horse at the pinnacle of the thirty-foot monument. An editorial in the Rocky Mountain News insisted,

“We have no prejudice against the noble red man. But history hath it that he faded away before the advance of the pioneers. . . . [W]e don’t want the Indian dominating a structure erected to the men whose business was getting rid of Indians.”4

Viewers found it unacceptable for an indigenous warrior to be glorified over the sacrifices of white hunters, prospectors and pioneer mothers. And that warrior’s martial pose contradicted popular notions of Indians necessarily yielding to dominant white culture.

Local newspapers focused on the controversy. When the secretary of the Western Federation of Miners stood trial for his life, he used his notoriety to champion replacing MacMonnies’ Plains Indian warrior with a Pony Express rider. The Rocky Mountain News complied with his request that its staff sketch such a monument and compose a poem supporting his proposal.

Under pressure from the Colorado Society of Pioneers, MacMonnies ultimately replaced the heroic Indian figure with a sculpture of renowned frontiersman and Indian fighter Kit Carson. Carson was the grandson of frontiersman and folk hero Daniel Boone. The finished monument featured Carson on horseback towering above three other bronze figures representing frontier life: a prospector, a hunter, and a Pioneer Mother with child. MacMonnies thus gave in to the public’s expectation that white Progress would stand proudly and unchallenged atop the massive pillar.

MacMonnies’ finished monument met with widespread approval. The 1911 dedication was celebrated by

“Hundreds of aged men who carried civilization into the Rockies . . . and aided in wresting what is now the great state of Colorado from the domain of ‘savage beasts and still more savage men,’”

along with Colorado’s governor and members of the Pioneer Society, the Sons of Colorado, and the Grand Army of the Republic. So important was it for aging settlers, including those “unable to acquire a competency under the conditions of civilization which they helped to bring about,” to attend the dedication of the monument in their honor that local newspapers and other “public spirited institutions” paid to bring them to Denver and give them “the time of their lives.”5

The Pioneer Monument and other Civic Center monuments became controversial once more in 2020 amid nationwide Black Lives Matter protests. Protesters tore down a monument dedicated to Christopher Columbus and a Civil War monument that included a commemoration of the Sand Creek Massacre. On June 26, 2020, city officials removed the statue of Kit Carson from the Pioneer Monument to prevent its destruction by protesters.

3 Quoted in Scolari, Paul. “Indian Warriors and Pioneer Mothers: American Identity and the Closing of the Frontier in Public Monuments, 1890-1930” (University of Pittsburgh, 2005), 114.

“Haywood’s Mind, on Eve of Trial, Wanders to the Pioneers’ Monument, and He Suggests Pony Rider,” Rocky Mountain News, May 12, 1907.