The second floor of The Works contains history exhibits dedicated to the area's local history, focusing on innovation, industry, and manufacturing. Upon reaching the second floor, you are greeted by a cast of the skull of the Burning Tree Mastodon, discovered near Heath on December 13, 1989. The Burning Tree Mastodon, and other prehistoric artifacts, are your first stop when touring the museum's history exhibits.

Examples of some of the mastodon's bones can be seen, including rib bones showing marks made by human tools. 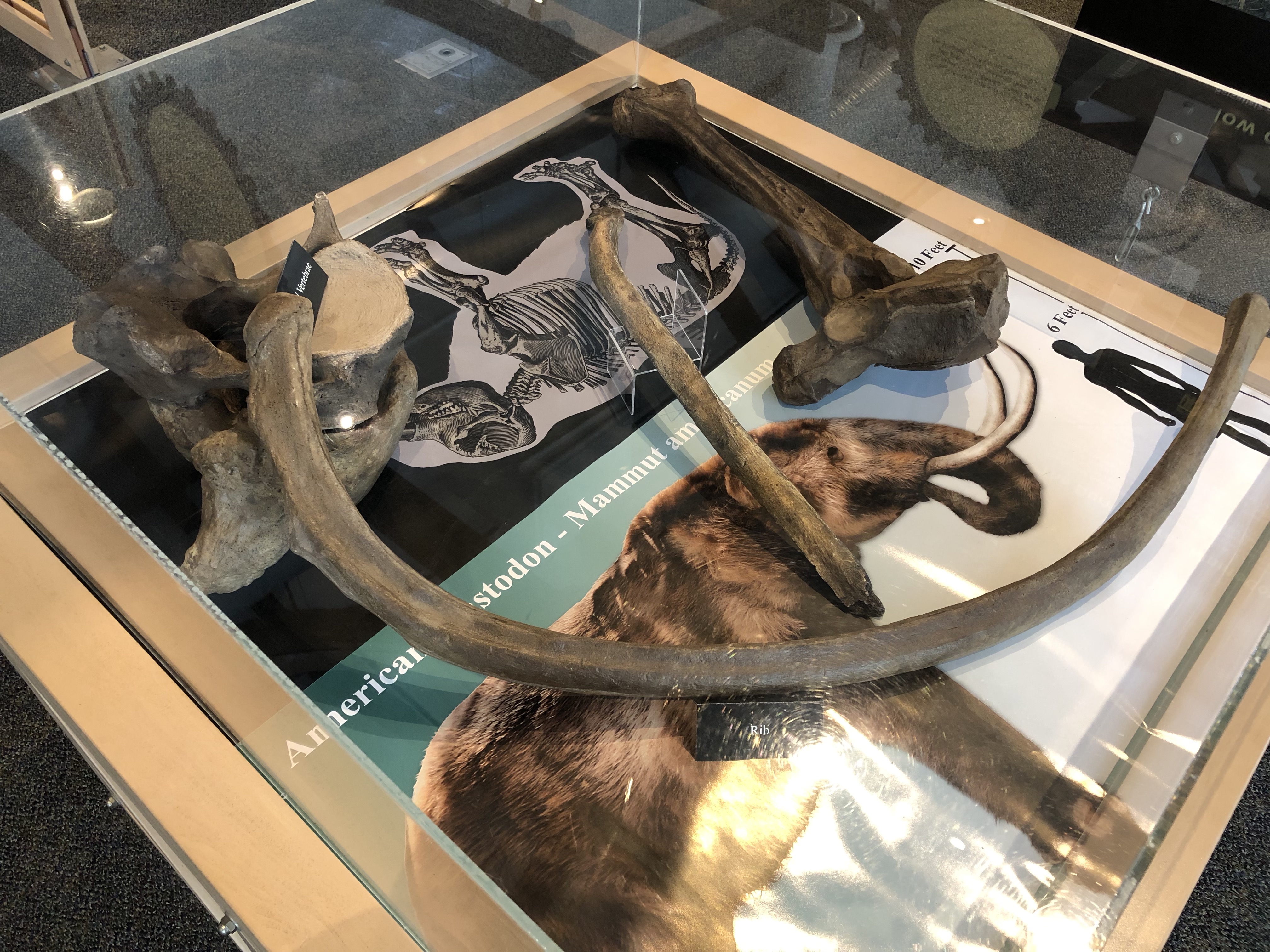 A case that includes some of the actual stomach contents of the mastodon shows how important this discovery was in expanding our understanding of what mastodons ate. 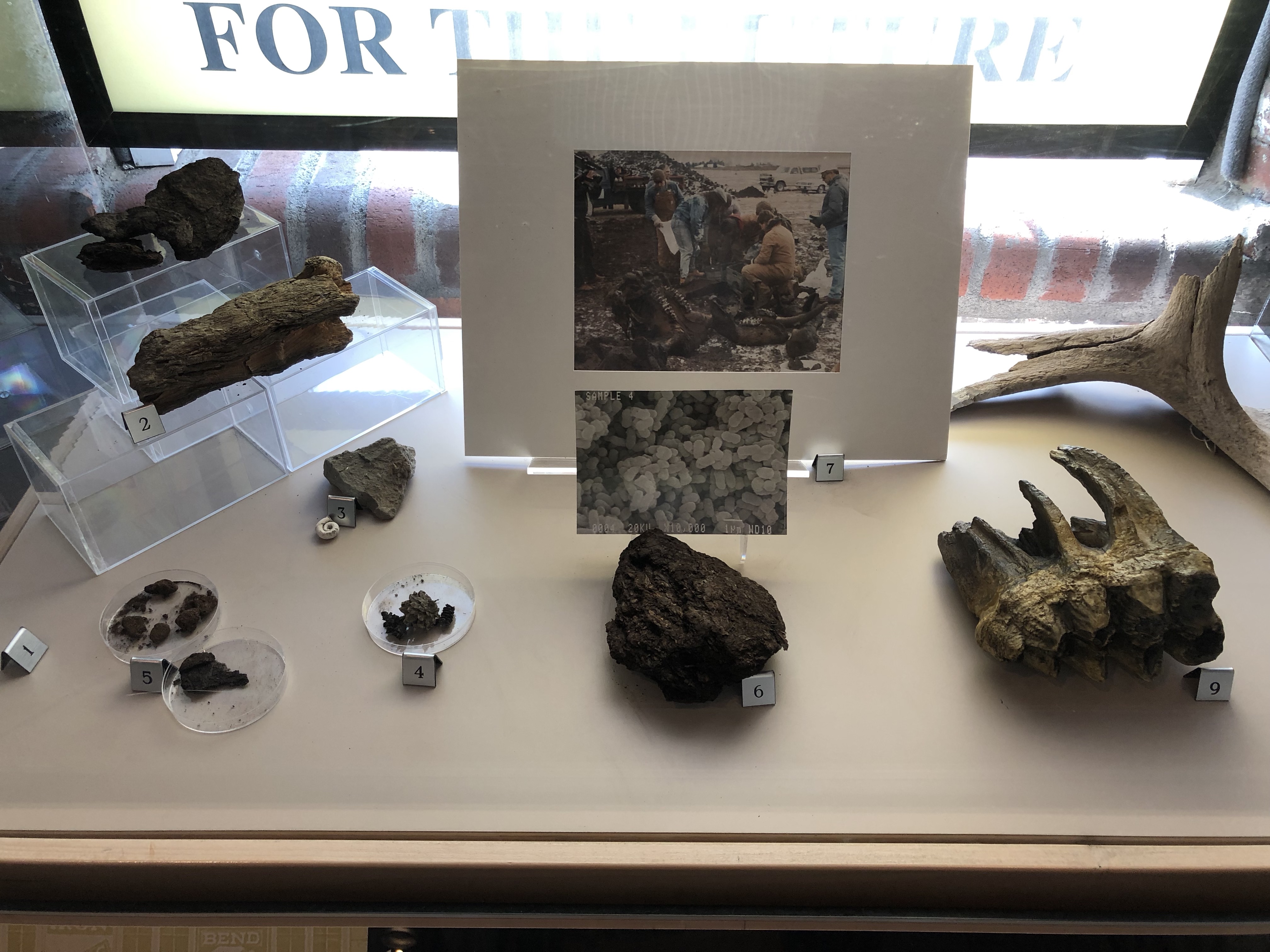 Many flint points and stone tools are on display in the museum. 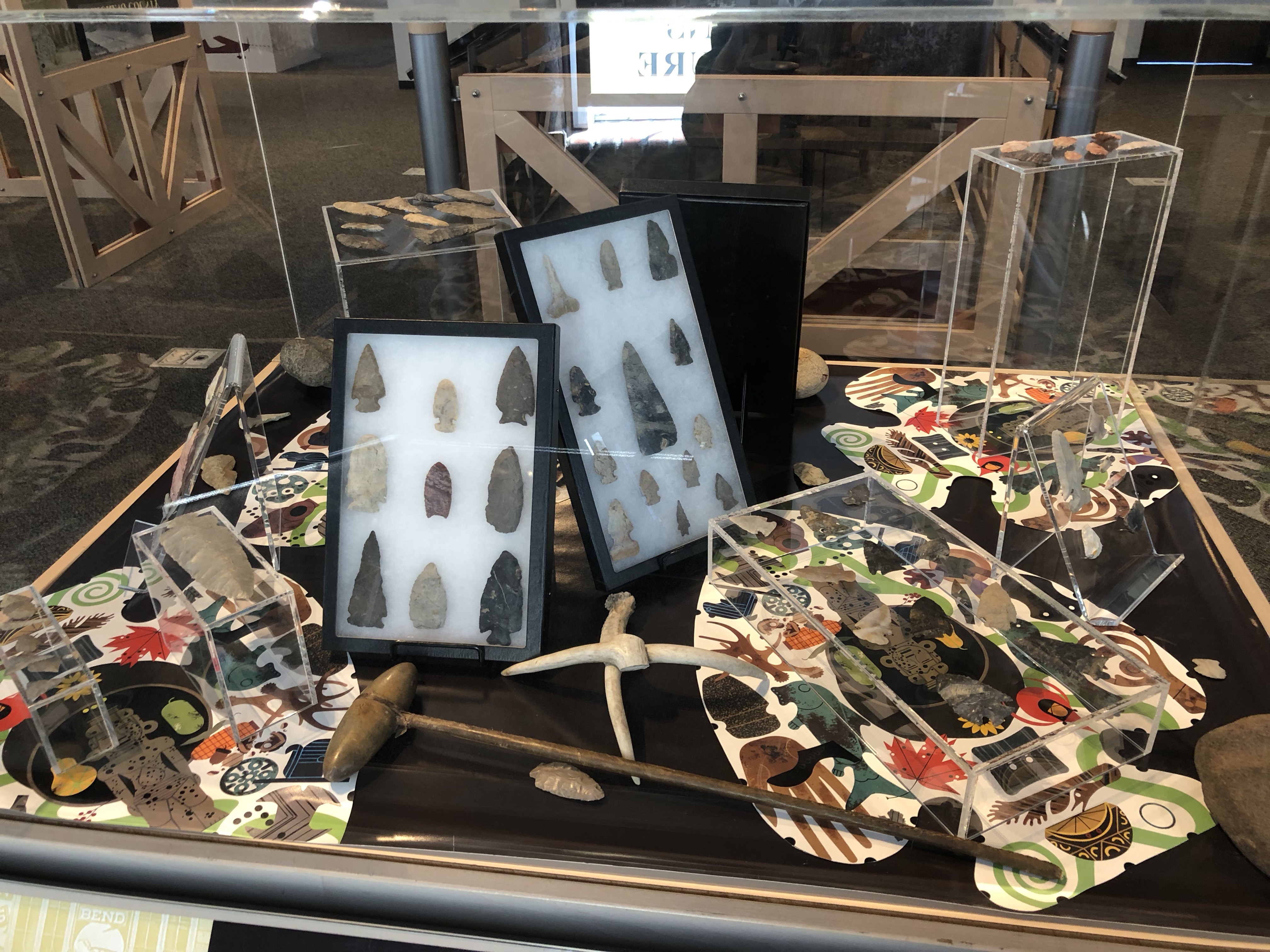 The Burning Tree Mastodon looks on as guests enter the museum floor. 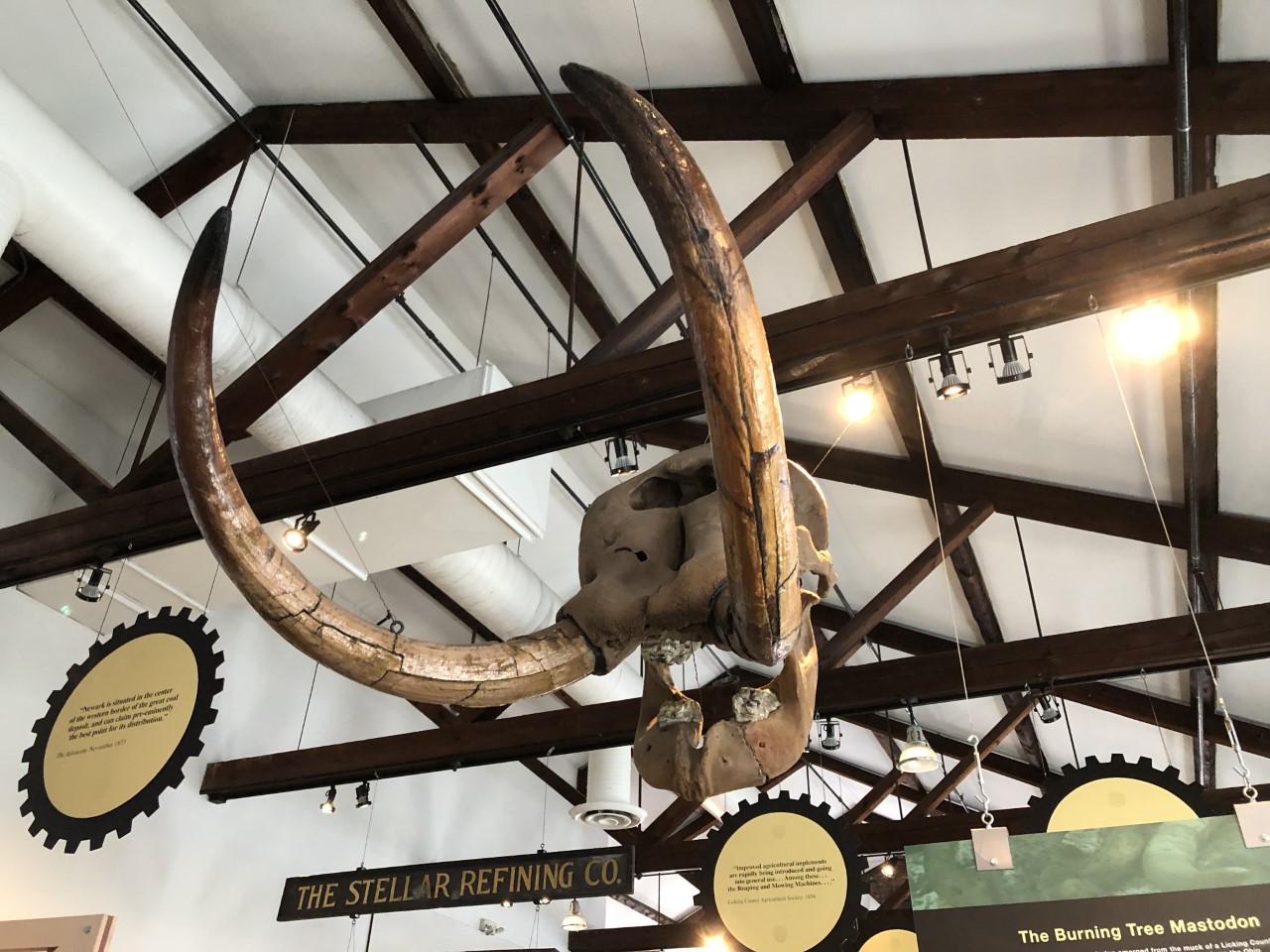 This map shows the extensive mound system in Newark as it originally appeared. Although many have since been destroyed, the Great Circle Mound and Octagon Mound still survive. 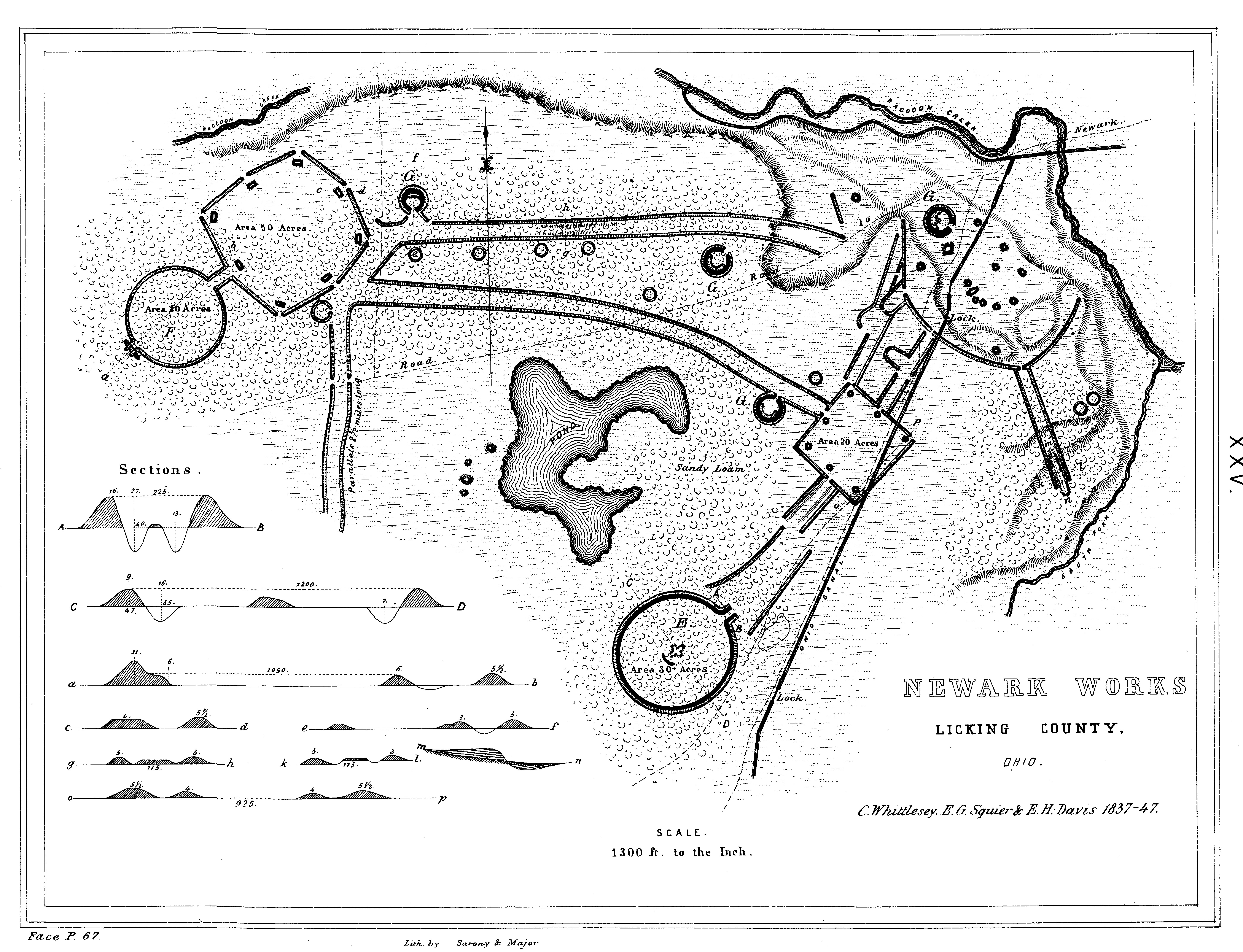 The Burning Tree Mastodon emerged from the muck of a Licking County bog in December of 1989. For two hectic days, scientists from the Ohio Historical Society (today known as the Ohio History Connection) and the Licking County Archaeology and Landmarks Society worked with employees of the Burning Tree Golf Course and many volunteers to excavate this remarkable skeleton from its Ice Age tomb.

The Burning Tree Mastodon is a large male. His bones reveal several healed injuries that probably came from fights with other males during the mating season. Radiocarbon dates on the bones indicate he died about 13,300 years ago - or about 11,300 B.C.E.

Scientists conclude the Burning Tree Mastodon was killed and butchered by Paleo-Indian hunters somewhere near the bog where he was found. During the Ice Age, the bog was a shallow lake. The hunters dragged the parts of the carcass to the lake and put them in three separate piles. The cool waters of the lake would have kept the meat fresh for a long time. It served as an Ice Age refrigerator!

Evidence that the mastodon was killed by humans is provided by several clues. The bones were found in neat piles, separate from each other. Several of the bones had cut marks made by stone tools. A few of the bones had grit stuck to them that does not occur naturally in the bog, which must have come from another place. A few bones had drag marks on them, which suggests that thy had been dragged across a gritty surface before being placed in the lake.

Licking County's first industry began when its prehistoric inhabitants quarried the area's flint deposits. Flint is a type of quartz that occurs in many colors produced by various impurities such as iron (red or brown). Native Americans crafted this flint into drills, knives, spear and arrow points, saws, and scrapers. These tools were used for hunting, food preparation, and making clothing.The area we now know as central Ohio was home to many prehistoric and historic Native American peoples. The prehistoric Hopewell culture thrived in Ohio from 100 B.C.E. to 400 C.E. The Hopewell lived in small villages along major river valleys and their tributaries. These people left a remarkable legacy. Historic Native Americans of present-day central Ohio included the Delaware, Shawnee, and Wyandot. These groups were known to hunt throughout the region.

Newark has been called the Moundbuilders City, a city literally built on a prehistoric American Indian site. The Hopewell people built a series of remarkable works of earthen architecture spread over a 4 mile area of the county. These geometric enclosures were sites for social, religious, and burial purposes. Although archaeologists are unsure of the full range of uses, they remain an impressive legacy of the region's first inhabitants. The significant sites are the Newark Earthworks, Octagon Earthworks, and the Wright Earthworks.