During Aviation’s “Golden Age” of the 1920s, Jacksonville‘s beaches were often the site of air shows. The hard-packed beaches also became a preferred location for attempts to fly coast to coast. The first successful transcontinental flight began from the hard-packed sands of Neptune Beach. Aviation pioneer James H. Doolittle launched a his second attempt at the flight on September 4, 1922. He arrived in San Diego, California 22.5 hours later. Transcontinental flights such as these helped convince the American public that aviation could be a safe, acceptable, and accelerated form of travel. On September 4, 1980, the Society invited Lt. Gen. James Doolittle back to Jacksonville Beach to unveil and dedicate a marker honoring his historic flight in 1922.

James Doolilttle with his plane and a crowd of spectators at Neptune Beach, Florida on August 6, 1922. This attempt would fail as the crowd forced Doolittle to veer too far toward the ocean, where he encountered wet sand. 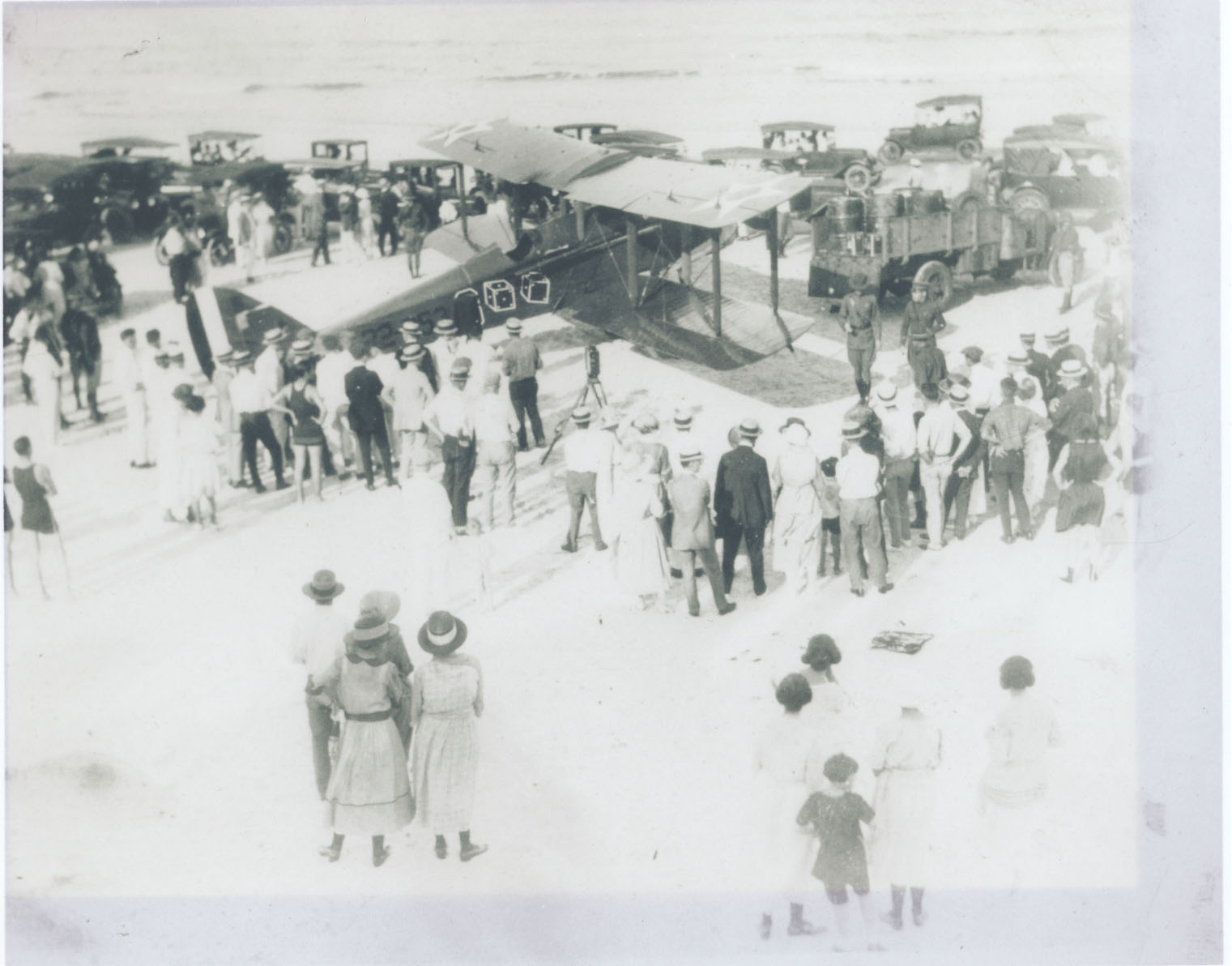 James Doolittle with his DeHavilland DH-4 bi-plane on September 4, 1922 in Neptune Beach, Florida. This flight would be successful. Doolittle would land in San Diego, California twenty-two hours later. 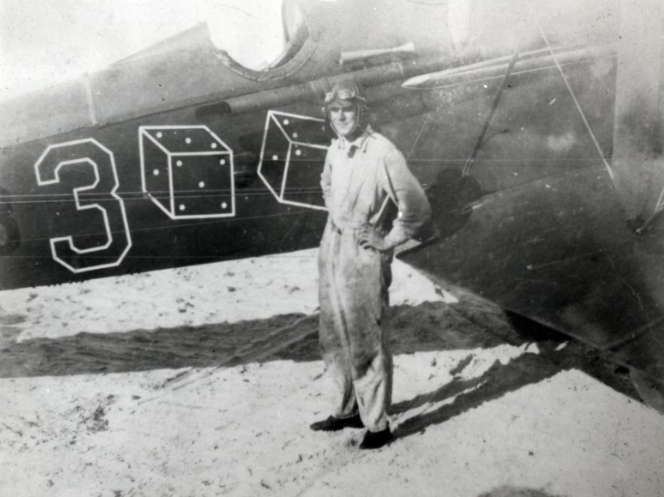 On September 4, 1980, the Society invited Lt. Gen. Doolittle back to Jacksonville Beach to unveil and dedicate a marker honoring his historic flight in 1922. Doolittle is the man in the pale suit and tie. 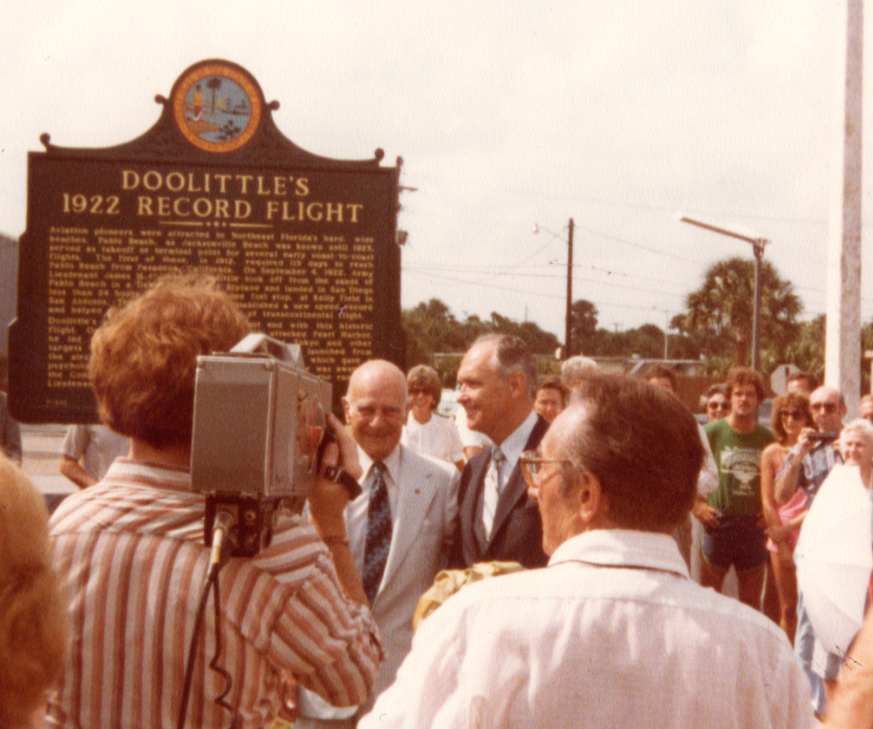 James Doolittle and Jean Haden McCormick at the dedication of his marker on September 4, 1980. McCormick was the founder of the Beaches Area Historical Society, today known as the Beaches Museum 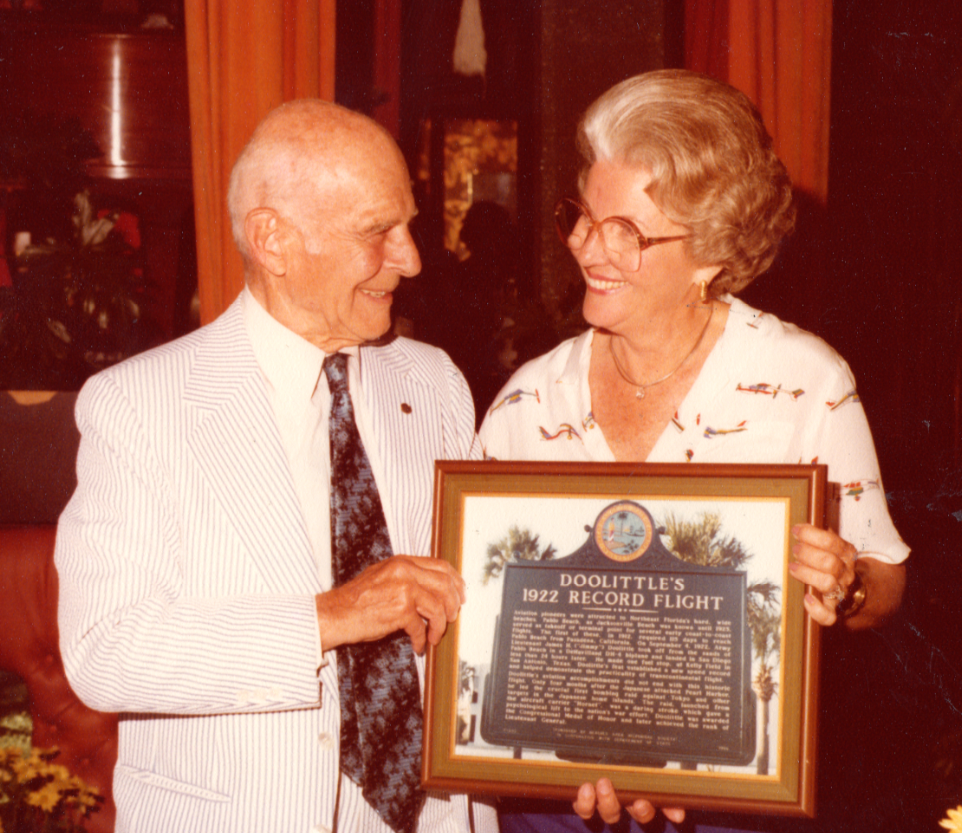 The 1920s were the Golden Age of aviation in America. This was a time when flyers were romantic, adventurous, swashbuckling pioneers. They earned reputations for daring and courage, when the possibility of a violent, fiery death was accepted as an occupational hazard.

The beaches of Jacksonville often served as a takeoff or landing location for early pilots due to the shoreline’s wide, naturally hard packed sand and hospitable year-round weather. The local Board of Trade sponsored air shows to draw tourists to the beaches. At last one air flight from the beaches ended with a disastrous crash.

The first successful flight across the United States began in Los Angeles and ended at Pablo Beach (now Jacksonville Beach) in 1912, after a 115 day trek. For a decade, these flights continued with sporadic success. Pablo Beach was a favorite spot because of similar East West latitudes to San Diego.

Army Lieutenant James Doolittle was already known for his bravery in the air when he made his attempt at a transcontinental flight on September 4, 1922 from Neptune Beach, which was then part of the town of Pablo Beach. He successfully launched his Great War DeHavilland DH-4 bi-plane into the air and flew what became Interstate I-10. He made a single stop at Kelly Field in San Antonio, Texas for fueling and maintenance and landed in San Diego 22.5 hours after take-off. Doolittle’s feat established a new speed record and helped demonstrate the potential for civilian transcontinental flights.

Doolittle’s aviation accomplishments continued through his life in both military and commercial careers. Only four months after the Japanese attack on Pearl Harbor, using his mastery of aviation skill, knowledge of mechanics, and intrepid imagination, LTC Doolittle organized and led a psychologically crucial aerial attack against Tokyo and other targets in the heart of Japan. The “Doolittle Raid” by an unprecedented launching of U.S. Army bombers from the USN aircraft carrier Hornet was a daring operation which boosted American morale and precipitated Japan’s disastrous attempt to seize Midway Island. For his courage and skills, James Doolittle was promoted to Brigadier General and awarded the Congressional Medal of Honor.