In August of 1793, a deadly outbreak of yellow fever began to sweep through the city of Philadelphia; over the next three months approximately 10% of the city’s population would die as a result of the epidemic. Bush Hill, an estate outside the city belonging to William Hamilton was requisitioned and turned into a fever hospital. Although two-fifths of Philadelphia's population had fled to the countryside, citizens Stephen Girard and Peter Helm remained in the city and volunteered to supervise the hospital. Doctors Jean Deveze and Benjamin Duffield cared for the patients at Bush Hill according to the "French method" of rest and rehabilitation. There is nothing left of Bush Hill today; the house was demolished in 1875 and the area is now home to the Community College of Philadelphia.

Bush Hill. The Seat of William. Hamilton Esqr. near Philadelphia 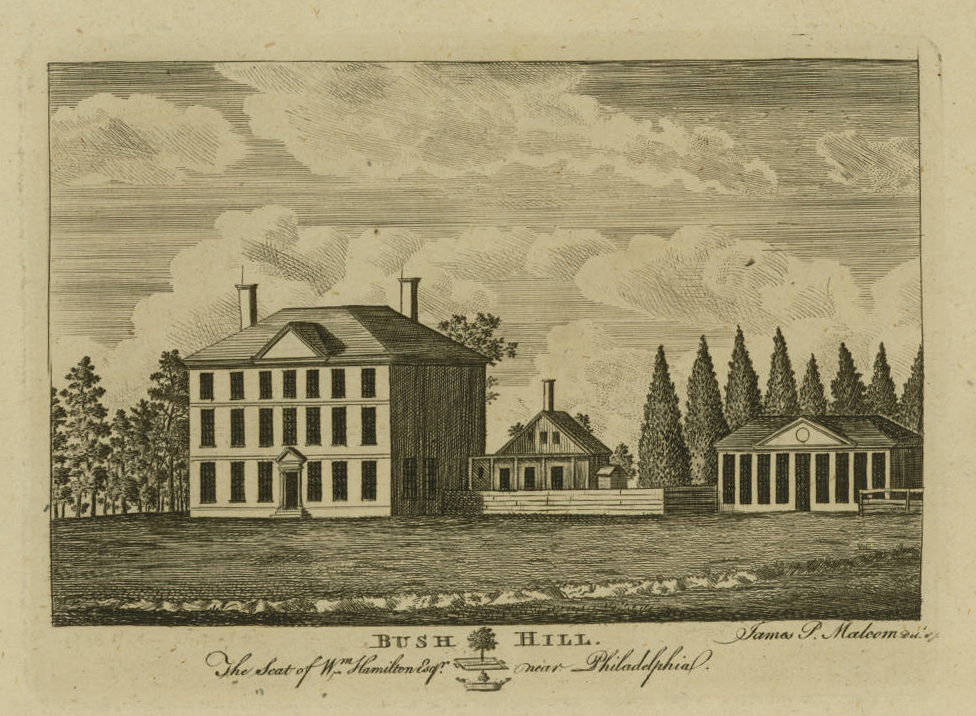 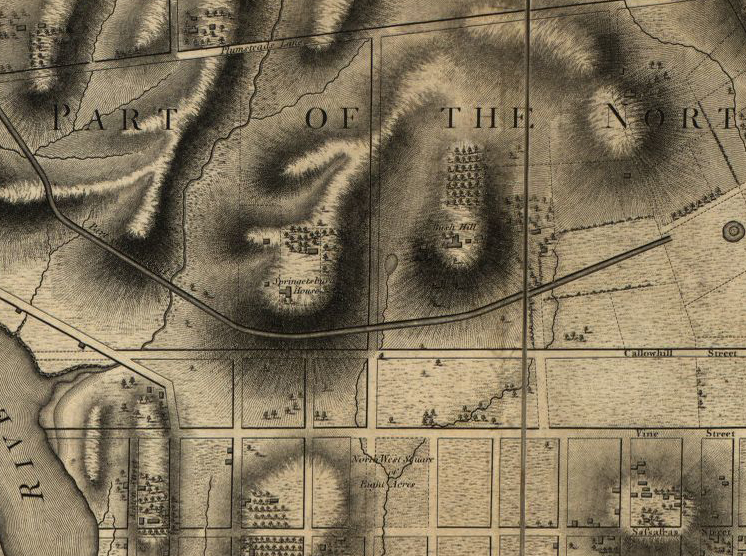 Yellow fever is a mosquito-borne viral disease, which causes fever, chills, muscle pain, nausea, and in serious cases, liver damage, which leads to the skin and eyes of its victims taking on its namesake yellow color. The cause of yellow fever wouldn’t be confirmed until 1900; in the 18th century opinions were divided between those who thought it was person-to-person contagious and those who thought it was caused by contaminated air, known as miasma. The Aedes aegypti mosquito favors prefers warmer climates, so yellow fever was not endemic to Philadelphia. The last major Philadelphia outbreak had been in 1762, but the disease-carrying mosquitoes were carried there in 1793 by ships from the Caribbean.

The first cases emerged in July and early August and on August 19 Benjamin Rush officially diagnosed the epidemic as yellow fever. As the disease (and and news about it) spread, residents with the means began to flee the city, along with the state and federal governments, both then located in Philadelphia. The city almshouse was closed to the sick so those who were infected but could not afford care were sent to a makeshift quarantine shelter in an amphitheater at 12th and Market that had been built for Ricketts Circus.Faced with objections from local residents, the Guardians of the Poor requisitioned the 150-acre Bush Hill estate on August 28, 1793. Bush Hill was located outside the city (which has since expanded) and its owner, William Hamilton, “was then absent, and had no agent in the city.”

Initially care at the hospital was poorly run and disorganized. A contemporary account by Mathew Carey claimed that the sick “were left almost entirely destitute of every assistance. The sick, the dying, and the dead were indiscriminately mingled together. The ordure and other evacuations of the sick were allowed to remain in the most offensive state imaginable.” On September 10, Mayor Matthew Clarkson called for citizens to form a Committee for the Relief of the Sick. The Committee first met on September 12 and three days later, Committee members Stephen Girard, a merchant, and Peter Helm, a cooper, volunteered to take charge of Bush Hill. Helm managed the exterior department while Girard managed the interior and assisted with care of the sick.

Girard and Helm turned Bush Hill around, ensuring that the hospital was properly staffed and that the patients were properly evaluated, clothed, fed, housed and treated. Two doctors, Jean Deveze (lately arrived from San Domingue--modern Haiti--and familiar with yellow fever) and Benjamin Duffield were engaged to attend regularly at the hospital and Bush Hill followed the “French Method” of healing, which consisted of rest and fresh air rather than "heroic" measures such as purging and bloodletting. According to Carey the patients received “broth with rice, bread, boiled beef, veal, mutton, and chicken, with cream of rice to those whose stomachs would not bear stronger nourishment. Their second meal was at six o'clock, when they had broth, rice, boiled prunes, with cream of rice. The sick drank at their meals porter, or claret and water. Their constant drink between meals was centaury tea, and boiled lemonade.”

In its reorganized state, eleven rooms and two entries of the Bush Hill mansion were allotted for the sick, for a total of “one hundred and forty bedsteads”. Men and women were separated and one room was set aside for the critically ill and another for the dying. An additional frame house was built by the Committee, with two more sick rooms and a loft for convalescents. Other convalescents were housed in the barn. Matrons and doctors also had quarters in all these buildings. To the west of the main building, the Committee built a new structure to serve as a morgue.

The fever finally abated in the late fall, as November frosts killed off the mosquitoes that carried the disease. Approximately 5000 people, 10% of the city's population had died. Bush Hill was finally closed as a yellow fever hospital in January 1794, although it was rented as a general infectious disease hospital for the next year and a half. In the aftermath of the epidemic, Philadelphia founded a permanent Board of Health in 1794 to undertake public health planning. Unfortunately, waves of yellow fever returned to Philadelphia repeatedly over the next dozen years, with particularly deadly outbreaks in 1797/98/99, forcing repeated cycles of evacuation and return to the city before the disease finally abated by 1820.

Carey, Mathew. A short account of the malignant fever, lately prevalent in Philadelphia: with a statement of the proceedings that took place on the subject in different parts of the United States. Edition 4th. Philadelphia. Printed by the author, 1794. https://catalog.hathitrust.org/Record/003434330

Powell, John Harvey. Bring Out Your Dead: The Great Plague of Yellow Fever in Philadelphia in 1793. UPenn Press, 1993.

"This plan of the city of Philadelphia and its environs (showing the improved parts)." Philadelphia : Published and sold by John Hills, surveyor & draughtsman, 1797. Image from Library of Congress. http://hdl.loc.gov/loc.gmd/g3824p.ct001369