Mills Brothers Clothiers opened in 1906. It was the year that Sam and Harvey Mills came from Roslyn to open a men’s clothing store. They moved into one-half of a brick building already standing on the present site at 10 S. Wenatchee Avenue. A pool hall and a barber shop occupied the other half. In 1918 the Mills brothers bought the building. They enlarged the structure by building back to the alley, adding a basement and remodeling to use all the available space. The building was remodeled again in the fifties when it acquired its present front. Nineteen-eighty-one marked the 75th year of the operation of the store by members of the same family. Sam Jr., and Jim, Harvey’s son, actively manage the business. Sam III is also involved. In the early seventies the firm bought the building next door, 12 and 14 S. Wenatchee Avenue, from Tom Snyder. In 1972 “The Balcony” was opened featuring clothing for the young man.

Mills Brothers as it was in 1906 when it first opened. 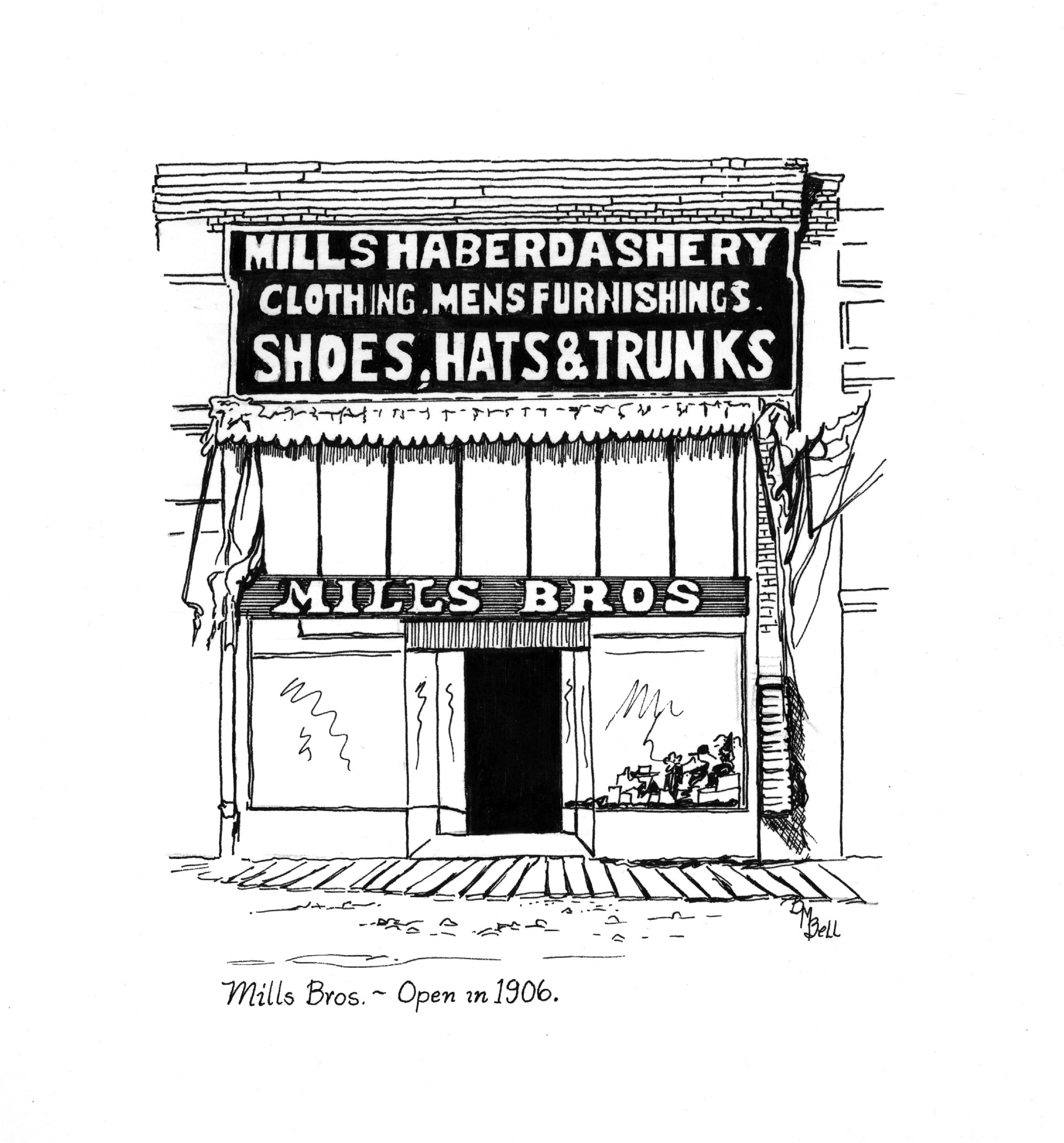 An early photograph of the Mills Brothers Storefront 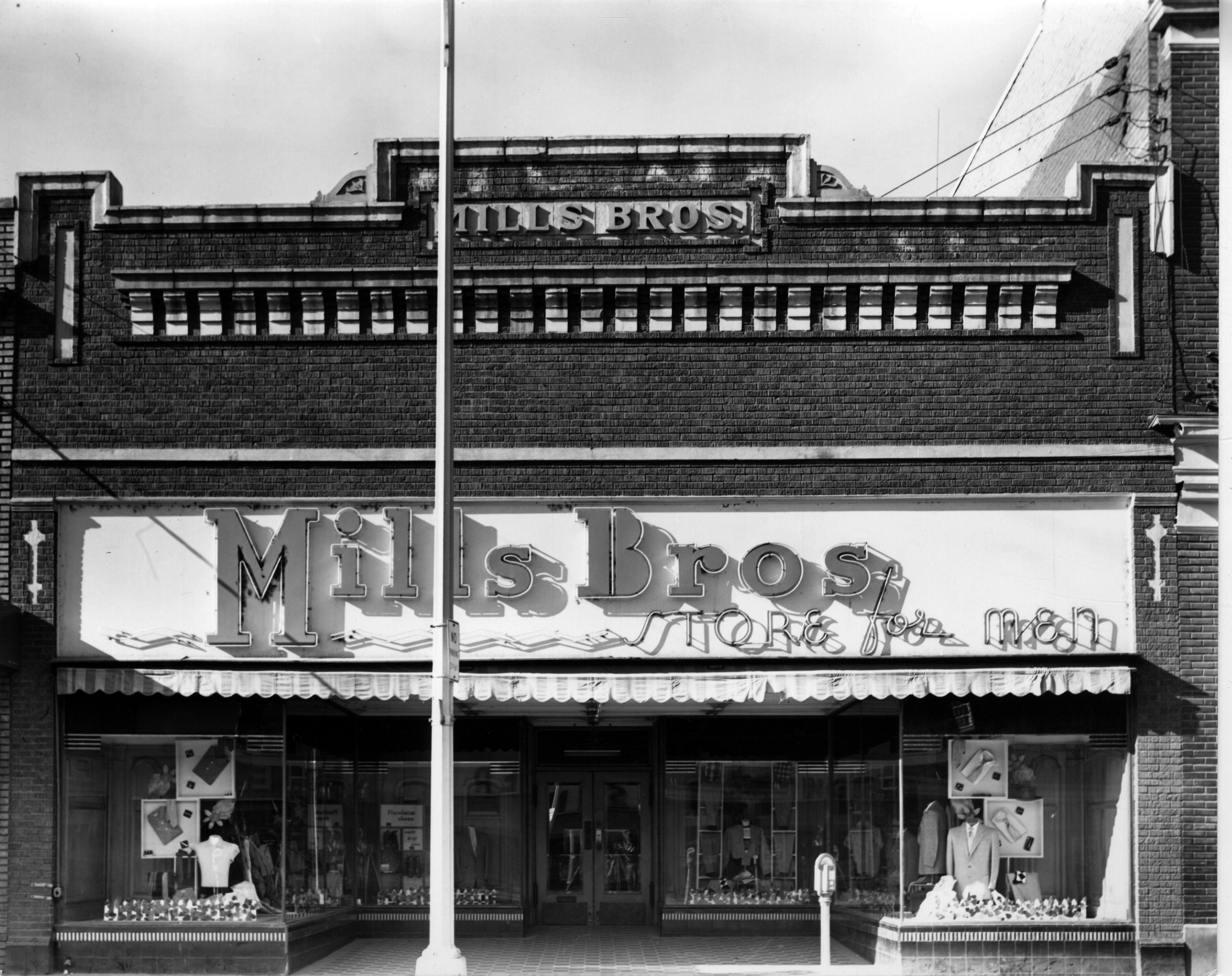 A mid-century photograph of the facade. 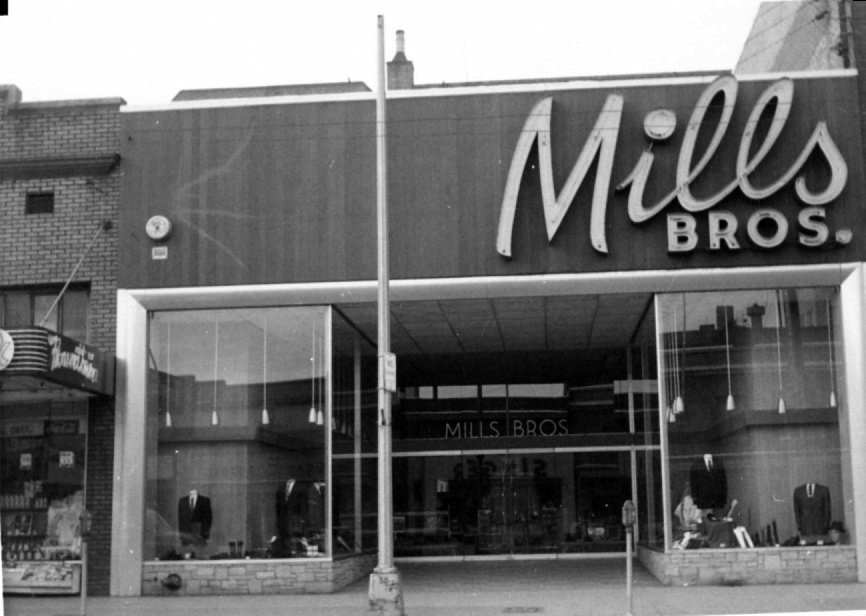 The day that brothers Samuel M. and Harvey Mills first set eyes on Wenatchee in August 1906 was a hot one. They got off the train at 4 a.m. and were not impressed with the wooden sidewalks, which in some places rose three feet above the ground, or the dusty dirt streets with the occasional huge rock in the roadway. It was already so hot they decided not to finish the night at one of the wooden hotels, but to go down to the river to cool off.

The young men, ages 27 and 21, were looking for a town in which to open a haberdashery, or retail store selling men’s clothing and furnishings. Having emigrated from Iowa to Roslyn, Washington with their parents in 1886, both were working for a large department store owned by the Northern Pacific Railroad. Sam was in charge of men’s clothing. The brothers had spent two of their vacations scouting out towns in western and eastern Washington and northern Idaho for their enterprise. They weren’t sure what to make of Wenatchee, a town of about 1,500 whose main business seemed to be saloons.

By mid-morning they had hired a two-horse buggy to explore the area. They drove down to Malaga and up to Dryden. After seeing all the orchards, Sam and Harvey decided that the country wasn’t as bad as their first impression had indicated. Wenatchee’s tree fruit business was thriving and there clearly was room for the town to grow. Wandering down Wenatchee Avenue, they met a man named Butler who owned a men’s clothing business. They made him an offer which he accepted and went back to Roslyn to quit their jobs and grab their belongings.

The Mills brothers opened their new shop on September 16, 1906, renting the northern half of a brown brick building at 10 South Wenatchee Avenue. The other half of the building housed a pool room and barber shop. Mills Haberdashery stocked suits, dress shirts, slacks, high-button shoes, derby hats and other fashionable clothing of the day, along with accessories such as hats, gloves, ties and socks. It carried a small line of work clothing, which also could be had at neighboring stores such as Ellis-Forde and the Wenatchee Department Store.

The brothers got involved in the community from the start. Harvey married Maude Frisbie in 1909 and Sam married Mary Jane Mahoney in 1910. Both men played in the local band, and joined the Wenatchee Commercial Club (forerunner of the Chamber). Sam was a charter member of the Kiwanis Club and served as lieutenant governor. He spent many years on the Boy Scout Council and was president of the Wenatchee Golf and Country Club. Harvey was a charter member and president of the Wenatchee Rotary Club. He served on the school board and was a Master of the Masonic Lodge. Harvey later was elected president of Oregon-Washington Clothiers and became its national director.

In 1912 the brothers purchased two tracts of undeveloped land: one on the Columbia River at Swakane Canyon (between Wenatchee and Entiat) and one near Dryden. They planted both parcels to apples. They sold the Dryden property in 1918 and purchased the building that housed their clothing store. This allowed them to expand into the former pool hall, doubling the size of their showroom and stock.

Sam M. and Harvey Mills operated the Swakane ranch until 1944. (Thanks to construction of Rocky Reach Dam, the property is now under Lake Entiat). They built a packing shed and had their own apple box label. The worst year for the orchard was 1935, when the apples were slow to mature due to cool summer weather. A heavy autumn frost froze them on the trees and broke many branches, ruining crop production for several years. This weather event affected apple production and prices throughout the Wenatchee area.

Meanwhile, their men’s store thrived. An article in The Wenatchee Daily World c. 1936 noted that Sam and Harvey Mills agreed that “a conservative policy of offering high quality merchandise with quiet dignity has produced results.” Mills Haberdashery, now called Mills Brothers, was one of downtown Wenatchee’s most prestigious businesses – and the brothers and their families were an integral part of the community. Sam and Harvey were recognized in 1960 as Pioneer Honor Citizens.

Sam Mills’ grandson, who now owns the store, was 15 when his grandfather died. “He was a distinguished, gentle, soft-spoken man,” he recalled. “He worked a lot of hours, including keeping the store open late on Saturday nights. He would sweep the floor and the sidewalk every morning – kind of like we do now!”

Founder Sam M’s son Samuel D. and Harvey’s son Jim began working in the store as teenagers. Following military service abroad during World War II, they returned to Wenatchee and worked full-time at Mills Brothers. They took over the store from their dads in the early 1950s, around the time that the store underwent a major remodel.

In 1954, new modern architectural styles were beginning to reconstruct the face of America. Mills Brothers was one of the first stores in Wenatchee to adopt a new look. A new façade of wood and aluminum, with the store sign written in a stylish type face of the period, was placed on the front of the building. Traffic on Wenatchee Avenue was briefly disrupted while backhoes worked on a sewer line and dug out a basement below the building. This added another level of sales space for a Boy Scout department, young men’s clothes and work clothes. Men’s and women’s rest rooms were also installed downstairs.

Sam D. and Jim Mills opened another store in 1971, right next door. Called The Balcony, it appealed to high school and college-age young men by selling jeans, denim jackets, and casual shirts such as the Snoopy’s Joe Cool line.

Sam’s son Sam M. began working part-time in the family business in high school and during college vacations, folding pants and stocking shelves. He graduated from Wenatchee High in 1966 and then from Seattle University with a liberal arts degree. He returned to Wenatchee in 1971 to work full-time at Mills Brothers, taking over the store in 1983 when his dad and uncle retired.

“The store has always been progressive,” he noted. During the Jazz Age of the 1920s it reflected the switch from formal three-piece suits to slim, unpadded jackets over plus-four or baggy trousers; from silk ties to knitted wool and bow ties; and boaters, fedoras and Panama hats. Wenatchee men of the 1940s could choose from a wide selection of zoot suits at Mills Brothers. In the 1950s the conservative, “Ivy League” look was in vogue: dark blue, dark brown and gray single-breasted three-button suits for businessmen, with cardigan sweaters, plaid sports jackets and loafers for casual wear. Of course every man wore a hat, and Mills Brothers carried a nice selection.

Despite the hippie fashion craze of the late 1960s and ‘70s, the current Sam Mills held to a relatively conservative look. He wore paisley shirts and nice slacks rather than jeans – but did succumb to the ‘70s influence by growing his hair long for a while.

Mills and his wife Vickie, who married in 1987, oversaw another remodel of the store in 1993. The Wenatchee Downtown Association and local banks had initiated a low-interest loan program to encourage downtown businesses to remove false fronts and bring back the historical architecture. Once again, Mills Brothers was ahead of the curve. Sam wanted to get away from the 1950s look, and had Wenatchee architect Brad Brisbine oversee the new design. “How you look out front gives an indication of the interior and the goods you sell,” the haberdasher said.

The Mills Brothers philosophy has been steady since 1906. “Clothes make a statement,” Mills said recently. “It’s what’s inside a person that really counts, but people see the outside first. I want to help people dress nicely and look good.” He said his basic values center around a strong family life, honest business dealings, and respect and liking for people. He and Vickie love spending time with their elderly parents, daughters and grandchildren.

Popular brand names at Mills Brothers today are Tommy Bahama, Pendleton, S. Cohen, and Dansko and Florsheim shoes. The store also offers tuxedo rentals and alterations. Sam Mills still works every weekday at the store, overseeing a staff of eight. He belongs to the Wenatchee Chamber and the Exchange Club, and is past president and former board member of the Wenatchee Downtown Association; currently he serves on the WDA economic development committee. “We have a very vital, well-functioning downtown,” he said. “I’m proud to be a part of it all these years. In many parts of the country downtowns have faded away with the influx of malls, but Wenatchee is doing fine.” He looks forward to continued improvements in 2014 with repaving of parts of Wenatchee Avenue and replacement of some overgrown trees.

He says Mills Brothers owes its long-time success to its loyal customers, many representing several generations who have shopped there, and its great staff. “It’s a wonderful business,” he said. “I love clothes, I love people. It’s been a satisfying business for three generations. You just don’t see too many independent specialty stores like you used to. But downtowns are ideal for niche businesses like ours. I couldn’t be happier.”

In 2016, Sam Mills decided it was time to retire so after 110 years in downtown Wenatchee Mills Brothers closed it's doors.