The Georgia Guide stone are four giant granite stones that are all almost 20ft tall placed in a circle with a capstone on top. They were revealed on March 22, 1980 after being sponsored by a man under the name of RC Christian. He represented a small group of foreigners whose goal was to leave a message for future generations. Their messages were so controversial that they were both sworn into secrecy. RC Christian is a false name the man who provided the designs and funding for the controversial Georgia Guide stones monument. Herbert Hinie Kersten was actually his real name, he was a doctor from Fort Dodge, Iowa. Herbert Hinie Kersten showed great support for David Duke who is a former Grand Wizard of the Knights of the Ku Klux Klan, in a letter he wrote to the South Flordia Sun Sentinel. William Sayles Doan, a creator and Fort Dodge antiquarian, asserts on camera that Kersten was a candid supremacist who voiced plans to make an estimation to authoritatively demonstrate that whites – and specifically Northern Europeans – were the world's unrivaled race. 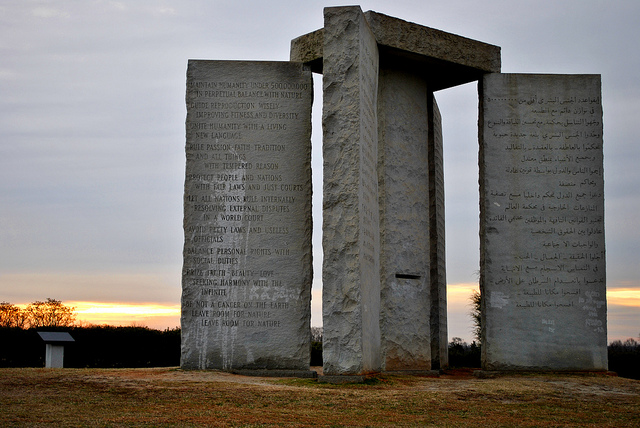 People come to this site when they are in need of guidance, but it also is said to be a place of Satanic worship.The Georgia Guide Stones caught the attention of many conspiracy theorists because of the law written on the stones concerning over population.

The four main granite slabs were aligned with the celestrial poles, while the centre stone was drilled with the an eye-level hole oriented with the North Star and a slit aligned with the with the Sun's solstices and equinoxes. The capstone, having its own slit, was to act as a calendar, revealing the date at noon each day when the sun shone through. (BBC.com)