First of the 21 missions and known as the Mother of the Missions, Mission San Diego de Alcala was founded on July 16, 1769 by Blessed Junipero Serra. It was designated as a Minor Basilica in 1976 by Pope Paul VI. The Mission today is an active Catholic Parish in the Diocese of San Diego. 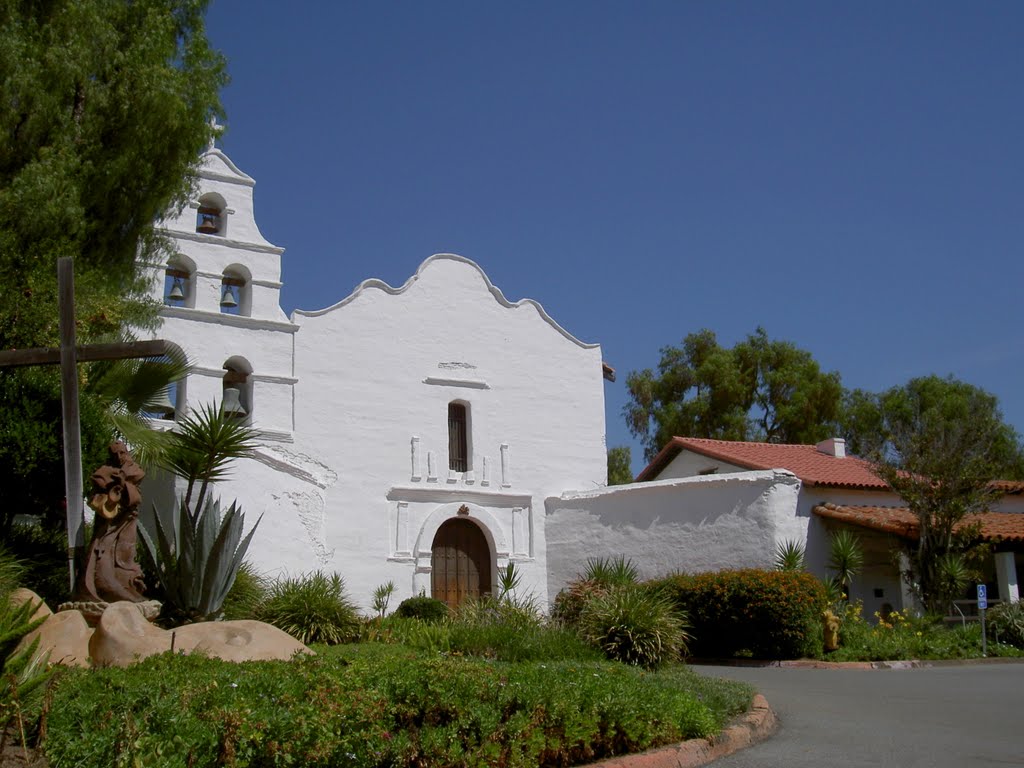 San Diego de Alcala, the first of the great California Missions, marks the birthplace of Christianity in the far West. It is California's first church. This remarkable and significant historical shrine provides an understanding and appreciation of the beginning of Catholicism in this corner of the world, so remote from the Mother Country of Spain and yet so similar.

Today the Mission, which was founded in 1769, serves as an active parish church and cultural center for people of all faiths who are welcome to visit and relive the grandeur and excitement of more than two centuries of California history and tradition.

For thousands of years, the American Indians lived in this area that we now know as the great state of California. Since all of the maps before the 18th century depicted California as an island, the Spanish explorers saw no reason to make settlements. In 1542, Juan Rodriguez Cabrillo, an explorer commissioned by the monarch of Spain, arrived in San Diego bay and named it San Miguel after the saint whose feast day was closest to the landing according to the Spanish tradition. In 1602 Sebastian Viscaino, leading another Spanish expedition, entered the harbor and renamed it San Diego after Saint Didacus of Alcala, Spain whose feast day was closest to the landing. San Diego was also the name of the flagship for this expedition.

Spain had the "right of discovery" to Alta or Upper California but it was not until 1768 when the Russians were seal hunting off the coast of California that King Carlos III of Spain became concerned and made the decision to build settlements. He sent orders to New Spain (Mexico) that expeditions must be sent to Alta California in order to establish Spain's Dominion. It was a political move but the King wanted it to look religious.

The Franciscan Friars who were assigned to the Baja missions were chosen to lead the expeditions to Alta California accompanied by the military who would protect them. Father Junipero Serra was chosen Superior of the Franciscans and Gaspar de Portola was the military leader.

Five expeditions were dispatched from New Spain (Mexico) - three expeditions by sea (the San Carlos, the San Antonio and the San Jose) and two land expeditions. The San Carlos and the San Antonio set sail in January and February of 1769. After rough seas and many hardships, they anchored in San Diego bay in April. The supply ship, the San Jose, which left New Spain in June, was lost at sea. The land expeditions were slightly more successful in terms of casualties but just as difficult, leading mules and horses and carrying food, farming tools and seeds. The total casualties of the expeditions were high. According to a letter written by Father Serra and dated July 3, 1769
"the San Carlos is without sailors, for all have died of scurvy, save one and a cook." Scurvy was raging through the contingent. Of the 219 who comprised the first four expeditions slightly more than half survived.

Father Junipero Serra led the last land expedition, which arrived on June 29th. Father Serra, a native Majorcan, was nearly 56 years of age. He was a small man, 5' 2" and 120 pounds and was plagued by a chronic leg infection that caused him to limp.

On July 16, 1769, Father Serra established Mission San Diego and the California mission system was begun on a site overlooking the bay. The mission remained at this site for only five years; the water supply was not sufficient for sustaining the crops, the soil was not fertile enough and the American Indians were intimidated by the military. The decision to move the mission six miles east was made by the pastor, Father Luis Jayme (a young Majorcan) and approved by Father President Serra. The new site was close to the San Diego River and the American Indian villages. Father Jayme had great rapport with the American Indians but two of the mission Indians became discontented with the rules and regulations necessary for an orderly unit and they incited hundreds of Indians in remote villages to riot. According to Father Palou's report of the incidence, eight hundred American Indians stormed onto the grounds in the middle of the night on November 4th, 1775. They pillaged the mission, burned it to the ground and massacred Father Jayme who became California's first Christian Martyr and who is buried under the altar in the present church.

Father Serra returned to Mission San Diego de Alcala to oversee the rebuilding of the mission. Fearing that would be another raid, the padres rebuilt the mission according to the specifications of an army fort. Reestablishing the mission was a long, difficult process. This mission was always one of the poorest. The land was difficult to till, the water not always plentiful. Slowly, Mission San Diego de Alcala became more productive. 1797 was our most successful year: 565 baptisms were performed, 1405 converted to Christianity; the land area encompassed 50,000 acres, harvesting corn, wheat, barley, kidney beans and chick peas; vineyards produced enough grapes for wine and gardens yielded vegetables. The mission owned 20,000 sheep, 10,000 cattle, and 1250 horses. These are amazing statistics considering that the area was arid chaparral with no livestock when the Spanish arrived.

In 1821, Mexico gained its independence from Spain and the Mexican government did not have the same allegiance to the missions. The Decree of Secularization in 1834 removed the administration of the mission from the Franciscans and gave it to Santiago Arguello.

After the United States acquired this area from Mexico, two companies of the artillery occupied the mission beginning in November, 1853. For the next several years, various companies of artillery and cavalry were at the mission until 1858 or early 1859. They made some repairs and added a second floor to the church. Subsequently, the mission was abandoned for several years. In 1892, the Sisters of Saint Joseph of Carondolet moved onto the mission compound and conducted an American Indian childrens' school for seventeen years.

In 1931, the mission was rebuilt to mirror the 1813 church. It is an active Catholic parish and is visited by thousands of fourth graders from throughout the state studying California history.