Ashland is the historic estate of Henry Clay, one of the most influential political leaders of the early 19th century. Clay earned a reputation as both a skillful orator and a diplomatic negotiator in Congress and served as Secretary of State under John Quincy Adams. Clay is best known for his willingness to confront the most controversial issue of the early 19th century-the extension of slavery in the West. Clay was the architect of the Compromise of 1850 and several other laws that facilitated Western expansion and allowed for the creation of free states while appeasing the slaveowners of the South. 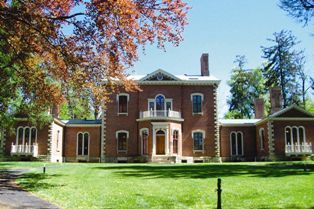 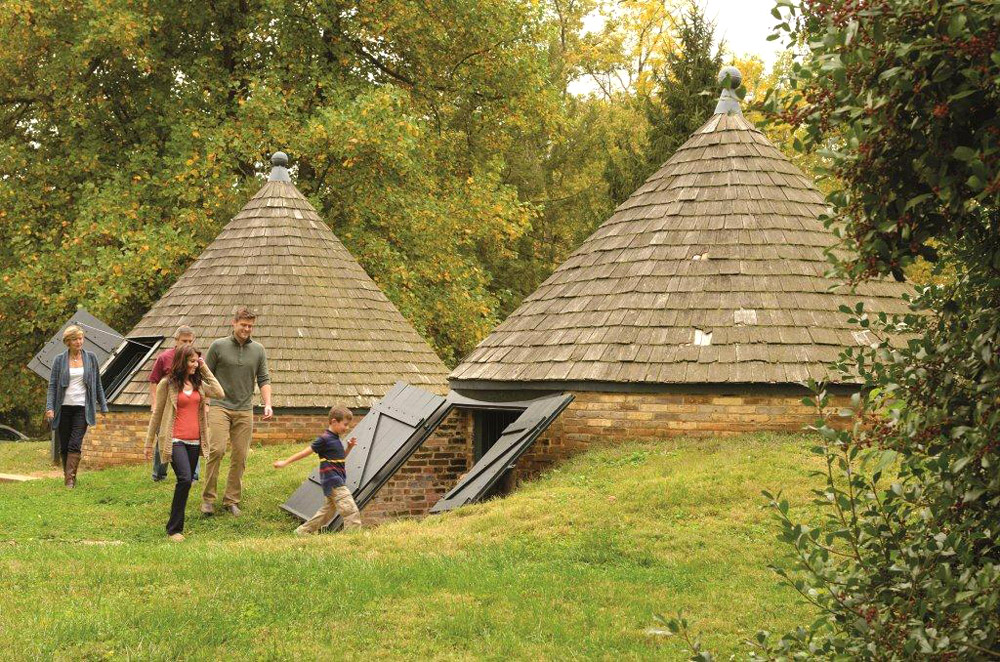 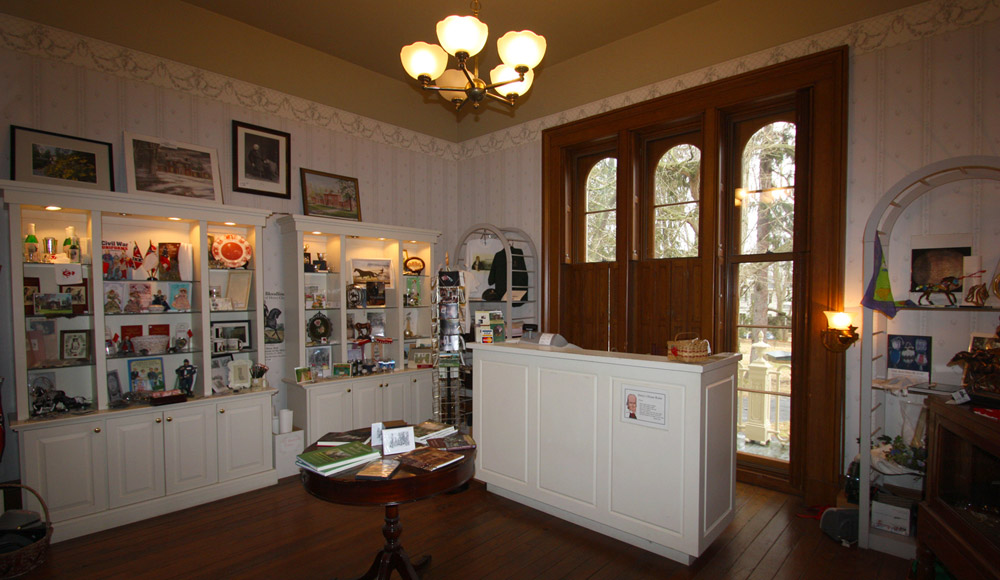 Sketch of the original home in 1850 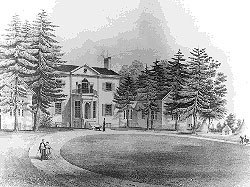 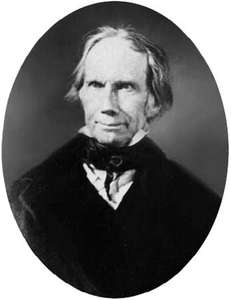 Henry Clay was born on April 12, 1777, the seventh son of nine to Reverend John and Elizabeth Hudson Clay. When he was only three years old, Clay witnessed a British raid of his family home. As a boy, he lived in Hanover County, Virginia, a prominent slave-holding community.

Within the first decade that he was in Kentucky, Clay established himself as a notable trial lawyer. As an attorney Henry Clay was one of the most successful of his era, winning a majority of his cases and defending a number of notable figures including Aaron Burr.

In 1803, Henry Clay was elected to the Kentucky General Assembly where he served until 1806, thus beginning this political career. He brought to the assembly his Jeffersonian views which were pitted against the more conservative views of Federalist leaders such as Humphrey Marshall. Clay's acumen as an attorney led to a moment in the national spotlight three years later when he defended former Vice President Aaron Burr in court after his duel with Alexander Hamilton. A year later, Clay was appointed to the United States Senate at the young age of twenty-nine, a position that he would hold for several terms at various points in his life.

Clay served as Speaker of the House of Representatives six times and became an important figure who helped improve American-British relations at a critical time. Clay would later serve as commissioner to the peace negotiations in Ghent, Belgium in 1814. While he served as a Speaker of the House, Clay changed the role into the influential position that it is today.

After returning to the United States, Henry Clay thrust himself into every national issue--even those such as tariffs and banking that were incredibly complex and other controversial issues such as the extension of slavery into the West. He helped to engineer the Missouri Compromise and stood against Andrew Jackson's attack on banking and support for infrastructure. Clay was a supporter of slavery and a slaveowner himself. However he supported the gradual emancipation of slavery through the proposed American Colonization Society as he felt it would be less harmful to the wealth of plantation owners.

Clay nearly became President of the United States. He ran three different campaigns, the final campaign of 1844 proved to be the most disappointing loss. Despite never becoming the head of the Executive Branch, he was the leading figure in the Legislative Branch in the decades leading up to the Civil War. He is best known for his compromises related to the extension of slavery--agreements he believed balanced states' rights and the interests of the national government. Since his death historians have credited Henry Clay with being one of the greatest Senators in United States history.

The Clay home, Ashland, is situated in the heart of Fayette County, Kentucky, "The Horse Capital of the World." Clay was a lover of horse racing and a successful planter. He also demonstrated a keen scientific mind, keeping up with the latest advances in agriculture and animal husbandry. Visitors to Ashland not only learn about Clay's political career but develop a sense of his passion for agriculture through the surviving structures.

The Clay’s home was built in 1812 on this property and was designed in part by famed architect Benjamin Henry Latrobe, the mind behind the US Capitol in Washington, D.C. When Clay's son took over ownership of the property after his father’s death, the original home was torn down as it had a number of structural issues. The current mansion was built in its place with construction beginning in 1857. The property remained the home of Clay’s descendants until 1866 when it was sold to the university we know at the University of Kentucky.

Today, the home is open for tours and the estate’s grounds are a popular place for locals to walk. There are a number of sculptures, gardens, and walking paths for visitors to enjoy. Additionally, there is a café on sight and the estate occasionally hosts public events.

Biographies of the Secretaries of State: Henry Clay (1777–1852), Office of the Historian. Accessed October 1st 2020. https://history.state.gov/departmenthistory/people/clay-henry. 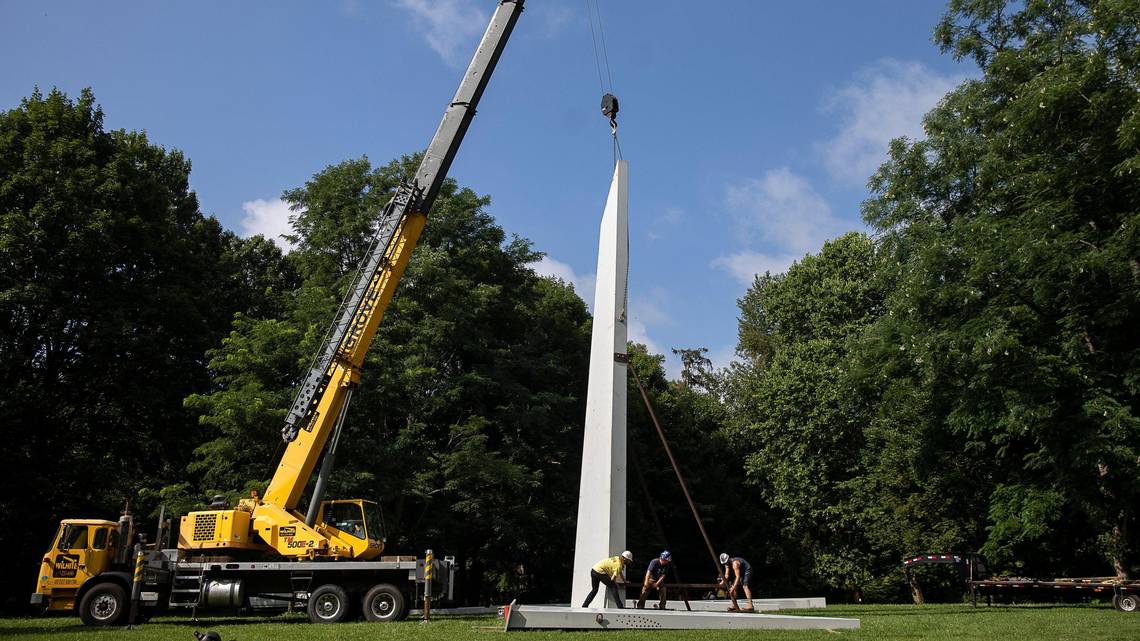 These three steel sculptures on the grounds of the Ashland Estate were designed by artist John Henry who is a Lexington-native. The pieces are entitled La Tour, Rocher du Diamant, and Publisher. Henry has stated in interviews that the sculptures are intended to reflect both the power and influence of Henry Clay and the deliberate and planned design of the grounds. The pieces were installed in July of 2019 and are temporary features, however, an exact date for their removal has not been determined. The Henry Clay Estate hopes that the sculptures will draw more visitors to the grounds and have revised their grounds tour to feature the pieces.

The Ashland Estate became a hub of activity during the Civil War for a brief period in 1862. James B. Clay, son of Henry Clay, was the owner of the estate at this time and was a known Confederate sympathizer. Union troops began to occupy the property after the Battle of Perryville but were defeated by Confederate troops led by General John Hunt Morgan. This marker stands in honor of those who died in the Battle of Ashland and gives a brief account of the battle. 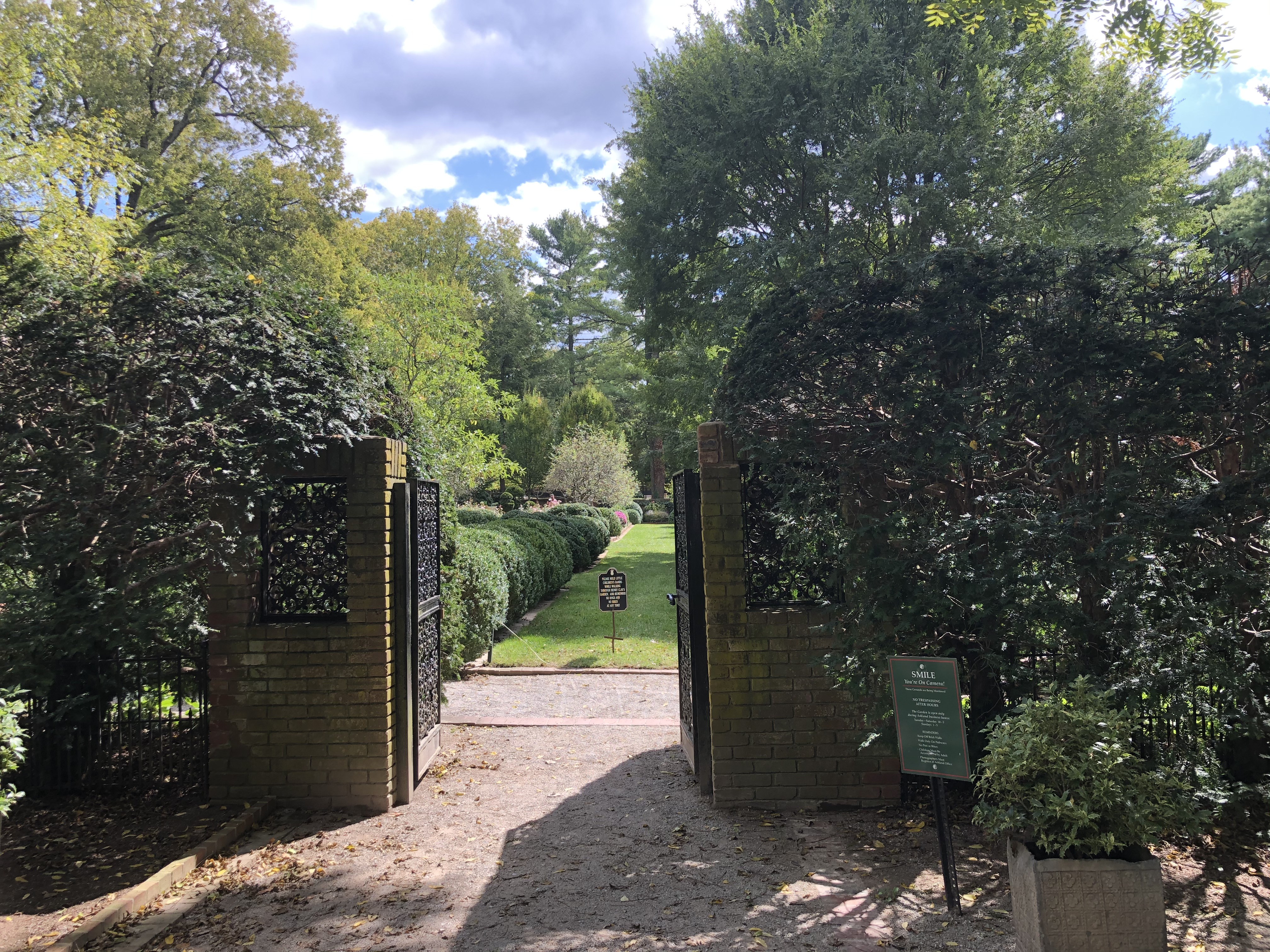 Since 1950, a partnership between the Garden Club of Lexington and the Henry Clay Estate has helped to create and maintain a formal garden on the grounds of Ashland. Today, club members meet weekly to perform garden upkeep. The club’s work has expanded from the formal garden to include the peony garden and a monarch waystation which both lie just outside the walls of the formal garden. In 2005, the Garden Club received a Historic Preservation Award honoring their more than 50 years of work on the estate.

Madeline McDowell Breckinridge spent 16 years living at Ashland until her marriage in 1898. Breckinridge is a descendant of Henry Clay and the powerful McDowell family. Breckinridge made a name for herself as an advocate for social change fighting for child protection laws and the rights of women. Her work built on foundations laid by her cousins Laura and Mary Barr Clay who had helped establish the women’s suffrage movement in Kentucky. Breckinridge’s 1920 funeral was held at the Ashland Estate before she was buried in the nearby Lexington Cemetery. This marker at Ashland commemorates her life and work.

Donated to the Henry Clay Estate in 1995, the bell was made for the first USS Ashland. The ship launched in 1942 and was in the Navy’s service until 1969. During World War II, the Ashland and its crew were awarded seven battle stars. The USS Ashland also served on missions in Korea from 1950-57 and for short periods in the Atlantic, Arctic, Caribbean, and the Mediterranean in the 1960s. This was the first ship to be named after the Ashland Estate, but another was launched in 1989. The bell is on display near the parking lot at the Ashland Estate and features a plaque with details of the ship’s service record. 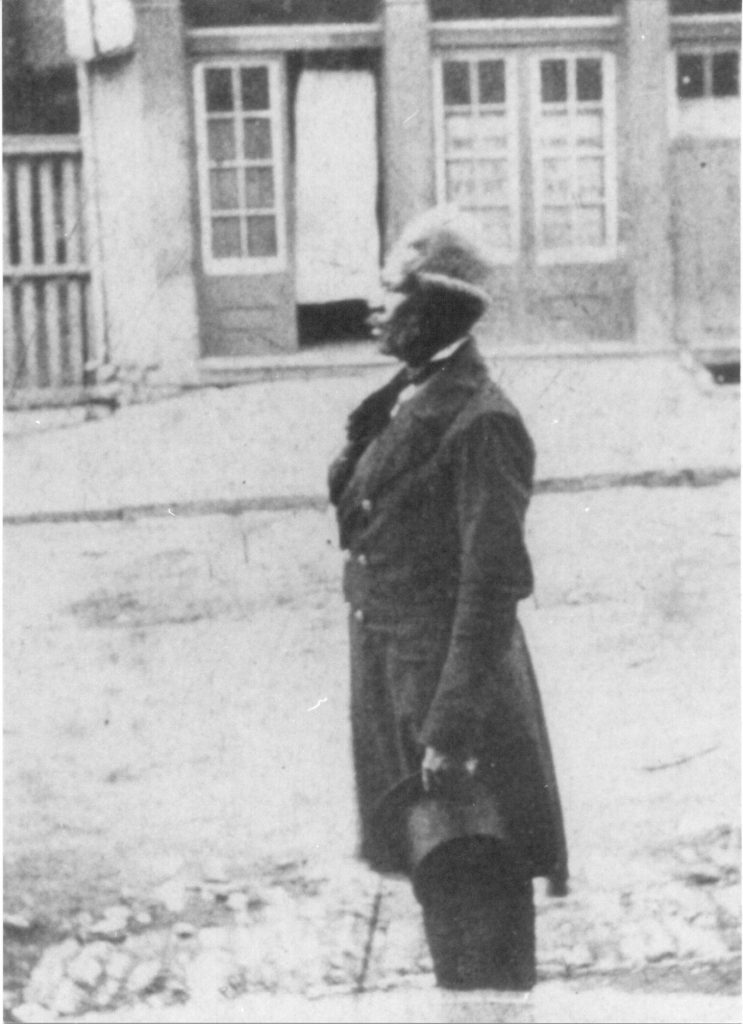 The wealth of Henry Clay’s family and the prosperity of his farm were built because of the family’s reliance on the labor of enslaved African American people. Records show that over 120 persons were enslaved at the Ashland Estate between Clay’s purchase of the property in 1804 and the ratification of the 13th Amendment in 1865. Of those enslaved at Ashland, Henry Clay himself purchased over 60 people. Though a few of the slaves at Ashland were freed by Clay, the vast majority were enslaved up until slavery was made illegal. The slave community at Ashland was made to work in the hemp fields, raise livestock, cook, clean, and raise the Clays' children. 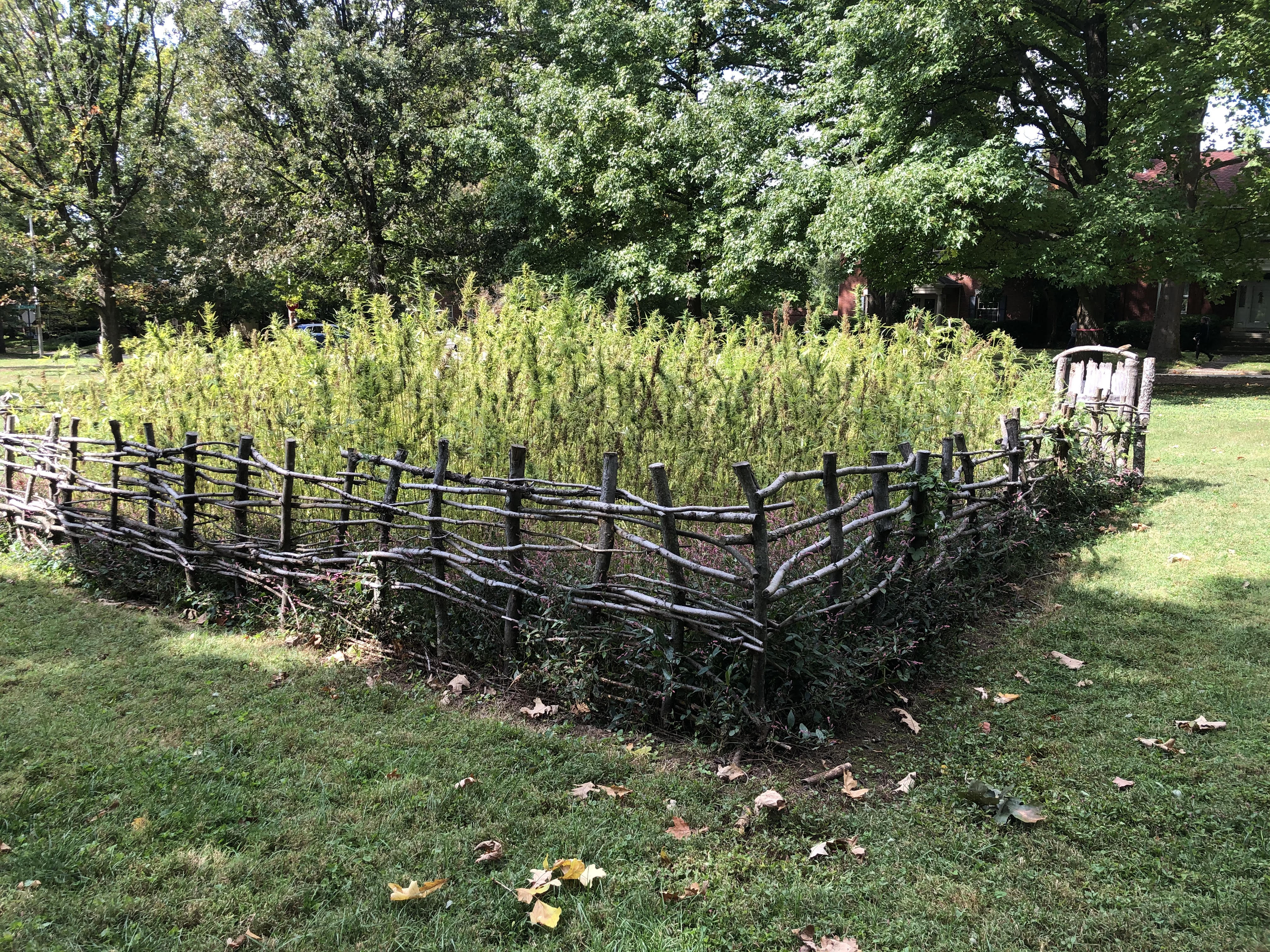 Though the Ashland Estate today takes up about 16 acres of land, the farm at one point covered nearly 660 acres. On this property, Henry Clay and his family grew hemp as a cash crop, raised sheep, cattle, and chickens. Clay’s farm was known especially for their hemp and wool exports and Clay himself was considered an expert on both subjects. The Clay family profited from slave labor and Henry Clay purchased at least 60 African American people who were forced to work on his farm or in his home. The operation of the farm at Ashland was entirely dependent on slave labor. Today a small enclosure on the property is dedicated to the growth of hemp which was harvested for the first time in over 130 years in August of 2016.

This tour will help you explore the grounds at Ashland as well as the historic neighborhood surrounding the estate.