Beacon Hill is is the oldest historical district in Massachusetts, dating back to 1625 when William Blaxton built a house and orchard on Beacon Hill's south slope. The home was located at this location, now home to row houses and the intersection of Beacon and Spruce Street. The Beacon Hill Historic District extends north and features hundreds of historic row homes, most of which date back to the early 19th century or late 18th century. The neighborhood is home to some of the oldest government buildings in the city, including the Massachusetts State House, and is also known for being highly valued on the modern real estate market (as of the creation of this entry.) As it is a center of current political activity, the Beacon Hill District is often referred to by locals as shorthand for the state government.

The neighborhood of Beacon Hill as seen from the Charles River, (with the Financial District in the background). Image by Tim Sackton. Licensed under CC BY-SA 2.0 via Wikimedia Commons. 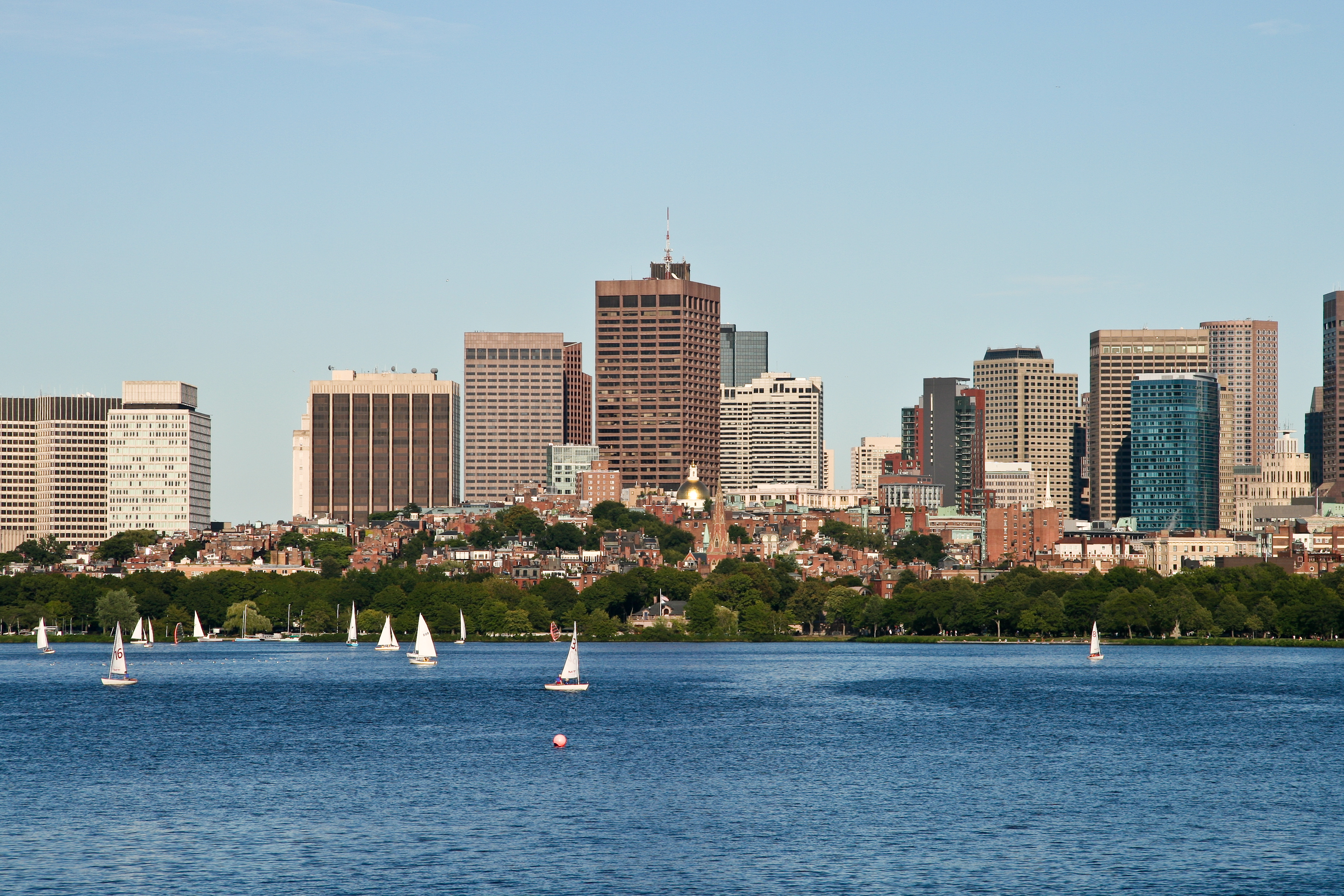 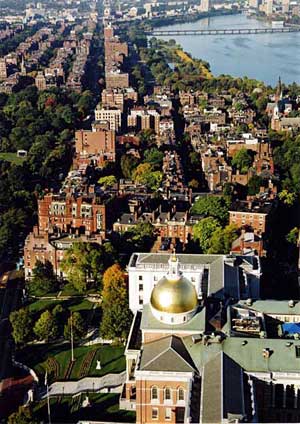 This photo shows engineers cutting down Beacon Hill in 1811. This image was taken facing north toward the Massachusetts State House. 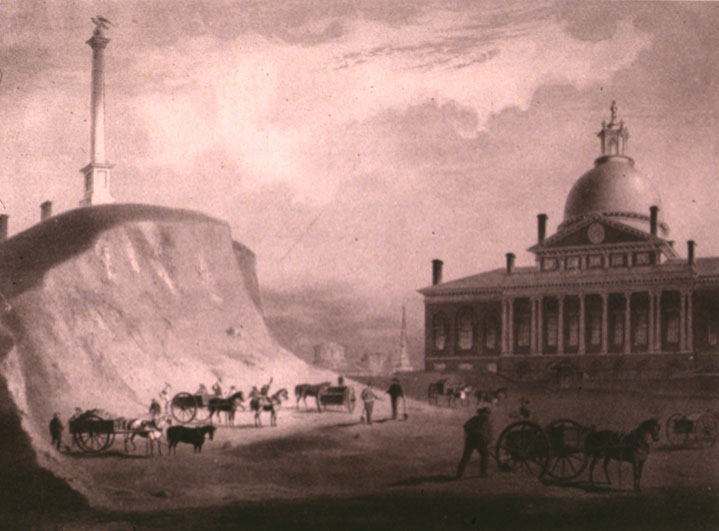 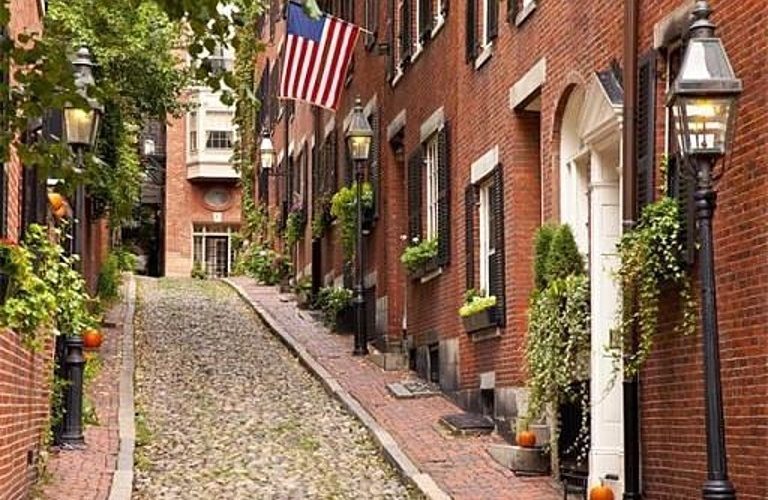 This plaque marks the location of Blaxton's home-the first built by a European settler in this section of Boston. 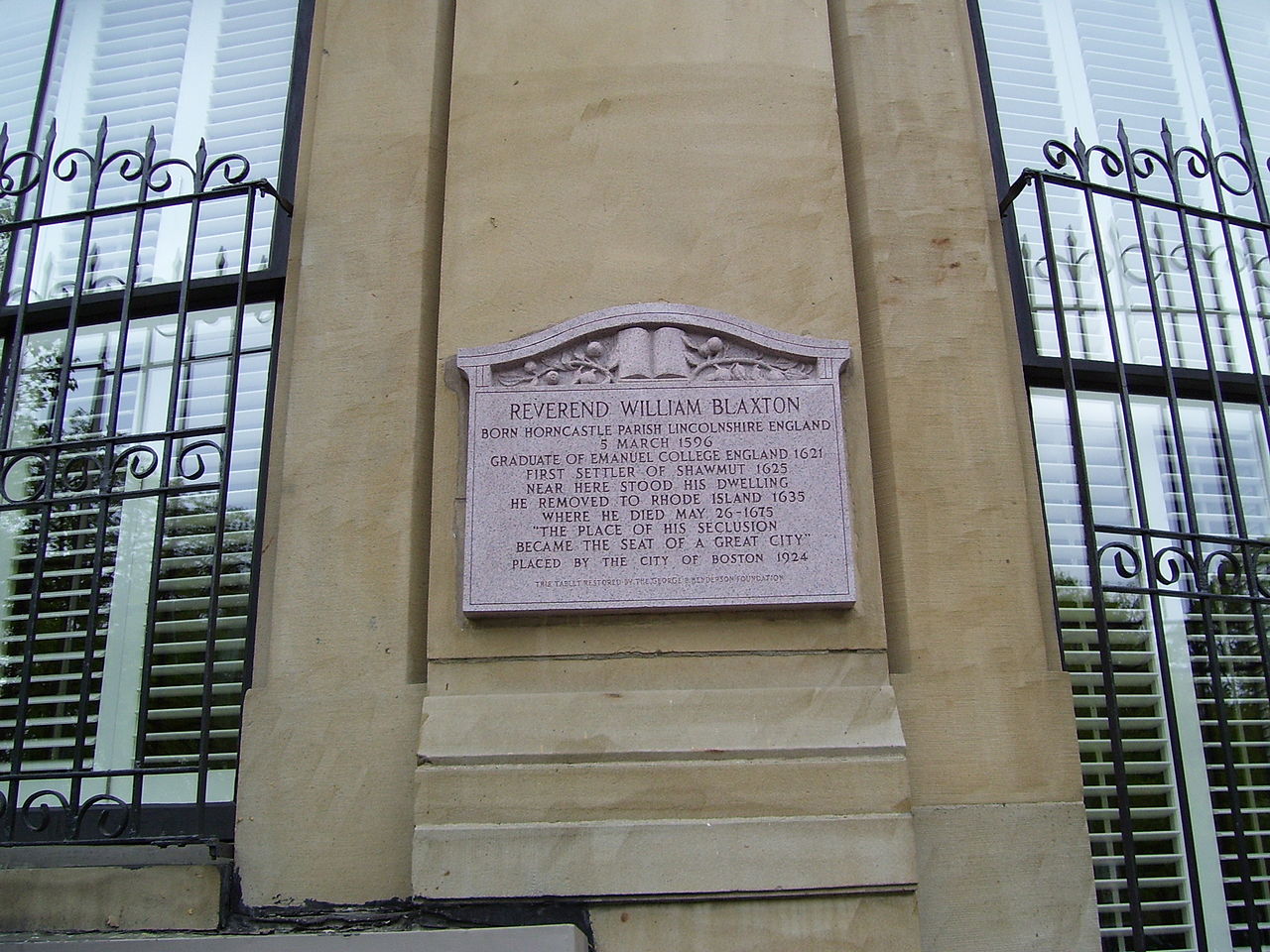 An artist's rendition of what this area may have looked like in 1625 when Blaxton settled near Beacon's Hill. 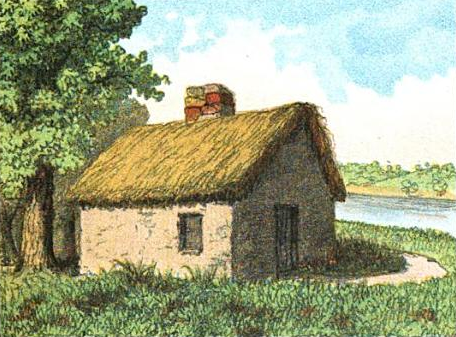 The history of the Beacon Hill District proper begins in 1791 when a Boston Doctor by the name of John Joy sought out the architectural skill of renowned Boston architect Charles Bullfinch for the creation of a personal home.  The resulting home inspired further houses in the area in the following years until 1795, when the State of Massachusetts elected to purchase the budding neighborhood, then known as “Hancock’s Pastures,” for the site of the State Capitol.

The State elected to have Bullfinch continue his work on the site, designing the capitol building itself and many of the buildings that inevitably sprung up around the capitol. At the time of the decision to site the State Capitol on Beacon Hill, the “Mount Vernon Proprietors,” a group of real estate tycoons operating out of Boston, made the move to purchase the land to the west of the capitol building’s future location with the purpose to build mansions for themselves along Beacon Hill.  The agreement between the tycoons was that each individual would finance and complete a mansion which, together, would form the foundation of a planned residential neighborhood.

While the Proprietors, working in conjunction with Bullfinch, aimed to design a grid-style neighborhood with spacious plots (presumably for the creation of more luxury-style homes,) only three of the proprietors, one of which was Bullfinch himself, actually completed their mansions.  The other landowners each used their land differently, including two owners who chose to build row houses on their plot instead of the mansions they had originally sought to build.

The final result was the foundation of what can be seen in Beacon Hill today: Stately row houses with punctuated, larger double-home plots that clearly stand out among the rest. The double-home plots are uniquely characteristic of Bullfinch’s style of the time, featuring what is now recognized as distinctly colonial New England flair.  Granite, brick, and wood stylings combine throughout stylized lintels, cornices, and porticos to create a colonial look that has been beautifully preserved within the district to this day.

Building in the district slowed throughout the years around the War of 1812, finally restarting in full near 1820 as focus shifted from war recovery to economic growth.  The 1830s brought another slowdown as the 1829 financial panic shook the housing markets in the Boston area.  The 1830s marked a change in architectural styles as well, which is visible still in the district.

As the start-and-stop development of Beacon Hill by the Proprietors continued throughout the early 1800s, the district looked less and less like its original plan had laid out. In addition to the addition of multiple sets of row houses, medium-sized houses had also been built by the proprietors, giving Beacon Hill a much more populated appearance than was once intended. Furthermore, houses built after the 1830s integrated stylistic changes from the Greek Revival style, which grew in popularity in New England throughout and beyond the 1830s, marking a departure from Bullfinch’s style.

Indeed, Bullfinch had not been working on the Beacon Hill district for some time when the 1830s came around, and the later developments barely resembled his vision for the district, save for the creation of Louisberg Square, a spacious common area for the people of the district.

Instead of the planned luxury district the Mount Vernon Proprietors originally set out to make, the resulting neighborhood was urban, contemporary, and notable enough to last through two centuries of use and habitation.  Beacon Hill is currently recognized as one of the most upscale neighborhoods in the city, still housing the seat of the State Government to this day. While many new buildings have been constructed, many of the originals still bear the stylization they were constructed with in the decades following the Revolutionary War.