This historical marker commemorates the Kansas homestead of George Washington Carver, a man who was born into slavery and became one of the most significant agricultural scientists of the late 19th and early 20th centuries. Carver's homestead was located about a mile and a half south of the sign. Carver was born into slavery around 1864 in Missouri and moved to Kansas as a young man. Carver proposed alternative crops to end the South's dependence on cotton and revolutionized agriculture in the United States with his many discoveries.

This historical marker is located near Carver's Kansas homestead. 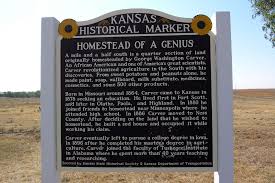 Carver came to Fort Scott, Kansas at the age of thirteen where he had to live with a foster family. At a very young age, he knew that there were certain sacrifices that had to make in order for himself to have a better opportunity to educated. He left Fort Scott and attended several different schools after he witnessed a Black man killed by a white mob in Fort Scott. He later he earned his diploma at Minneapolis High School in Minneapolis, Kansas.

Carver applied to numerous colleges before he was accepted to Highland University in Highland, Kansas. However, that school (a community college today) rejected Carver when they discovered that he was African American. Carver traveled to Eden Township in Ness County, Kansas where he claimed a homestead near Beeler. At this farm, Carver maintained a small studio where he studied plants while he also grew crops for sale and expanded his landholdings. Carver grew a small amount of rice in addition to corn which he sold to support the farm, and he also cultivated a garden and greenery. He also earned cash by completing odd jobs and working as a farm hand.

In 1888, Carver secured a loan at Bank of Ness City which allowed him to continue his education. He studied art and piano at Simpson College in Iowa and it was here where one of Carver's teacher noticed his talent and passion for painting flowers and plants. That instructor recommended that Carver study plant biology, a recommendation that led to some of his early experiments in plant pathology and mycology. After securing an advanced degree and teaching, Carver gained national recognition and respect as a plant biologist.

George Washington Carver discovered new techniques that allowed farmers to increase their yields of cotton and also taught strategies to forestall soil exhaustion. While a professor at Tuskegee Institute, Carver discovered techniques to correct soil depletion by continually planting cotton and using soil-enriching crops such as peanuts to reverse the effects of relying on only one crop such as cotton. He also led extension programs that taught many rural farmers how to improve their yields.