Listen to a short history of this memorial from Dr. Shelly Cline of the Midwest Center for Holocaust Education

This monument was dedicated in 1963, making it one of the first memorials in the United States to recognize the history of the Holocaust. At the end of World War II, Holocaust survivors moved around the world to rebuild their lives. Given the large Jewish community in Kansas City and global family networks, some survivors moved to the Kansas City metropolitan area. With the support of the Jewish community and others throughout Kansas City, local Holocaust survivors led the effort to raise funds to create this memorial to the six million Jews who were victims of the Holocaust. Fundraising began in the late 1950s and President Harry Truman spoke at the memorial's dedication ceremony on June 9, 1963. The monument was one of the first of its kind in the United States and originally stood on Holmes Road until the decision was made in 1988 to move to its present location on the grounds of the Jewish Community Center.

The Memorial to the Six Million was dedicated on Holmes Road in 1963 and moved to its present location in 1988. 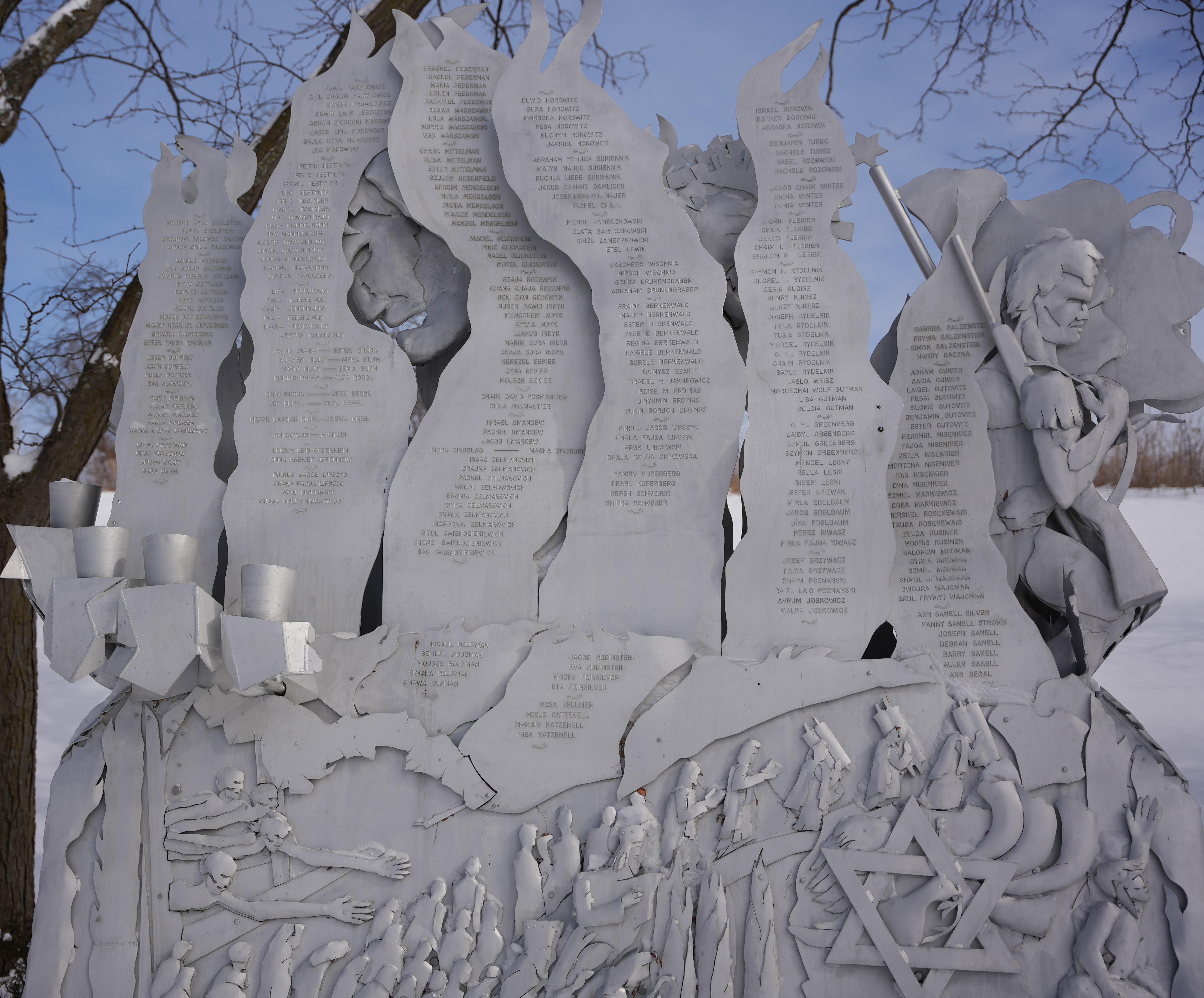 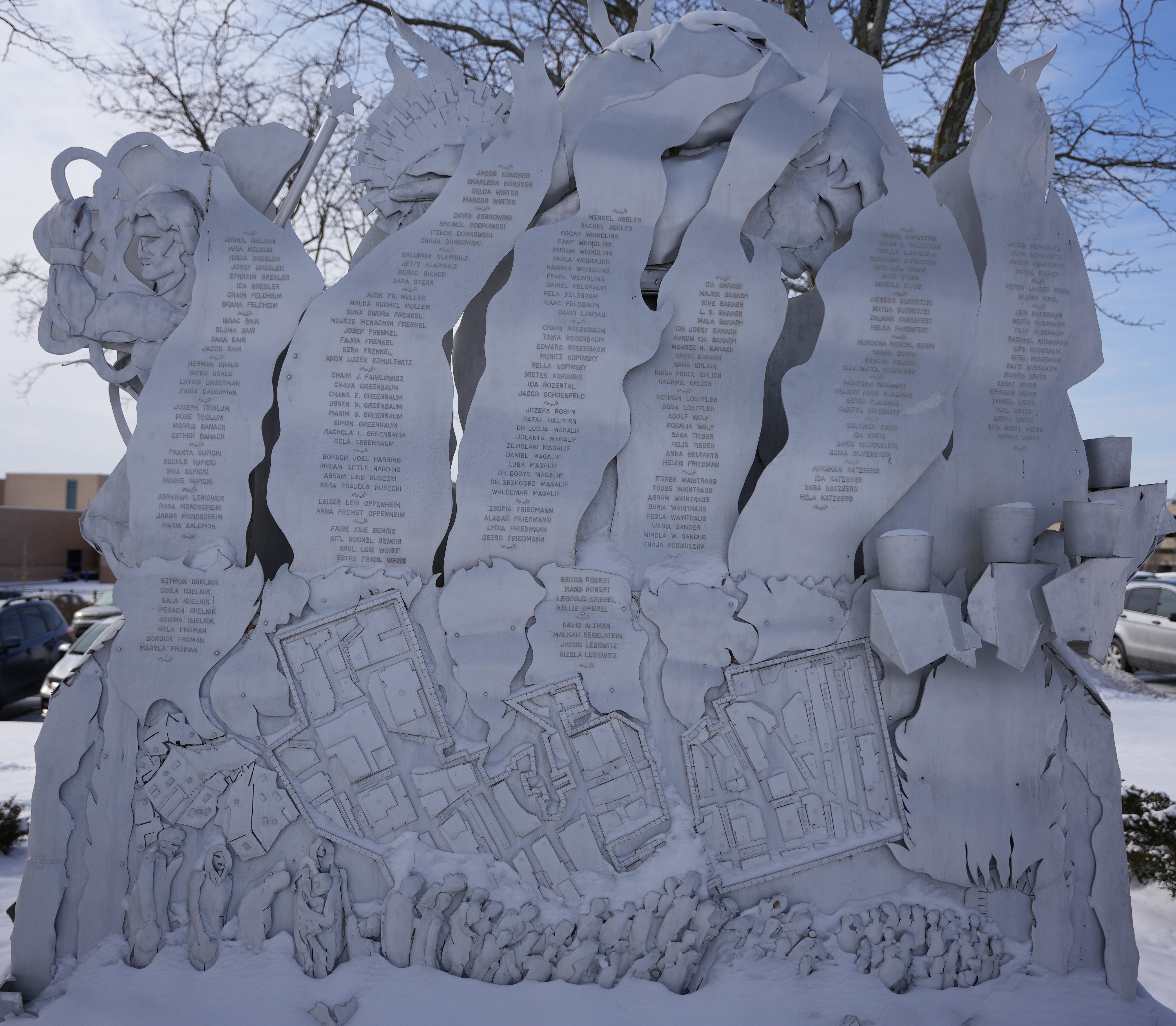 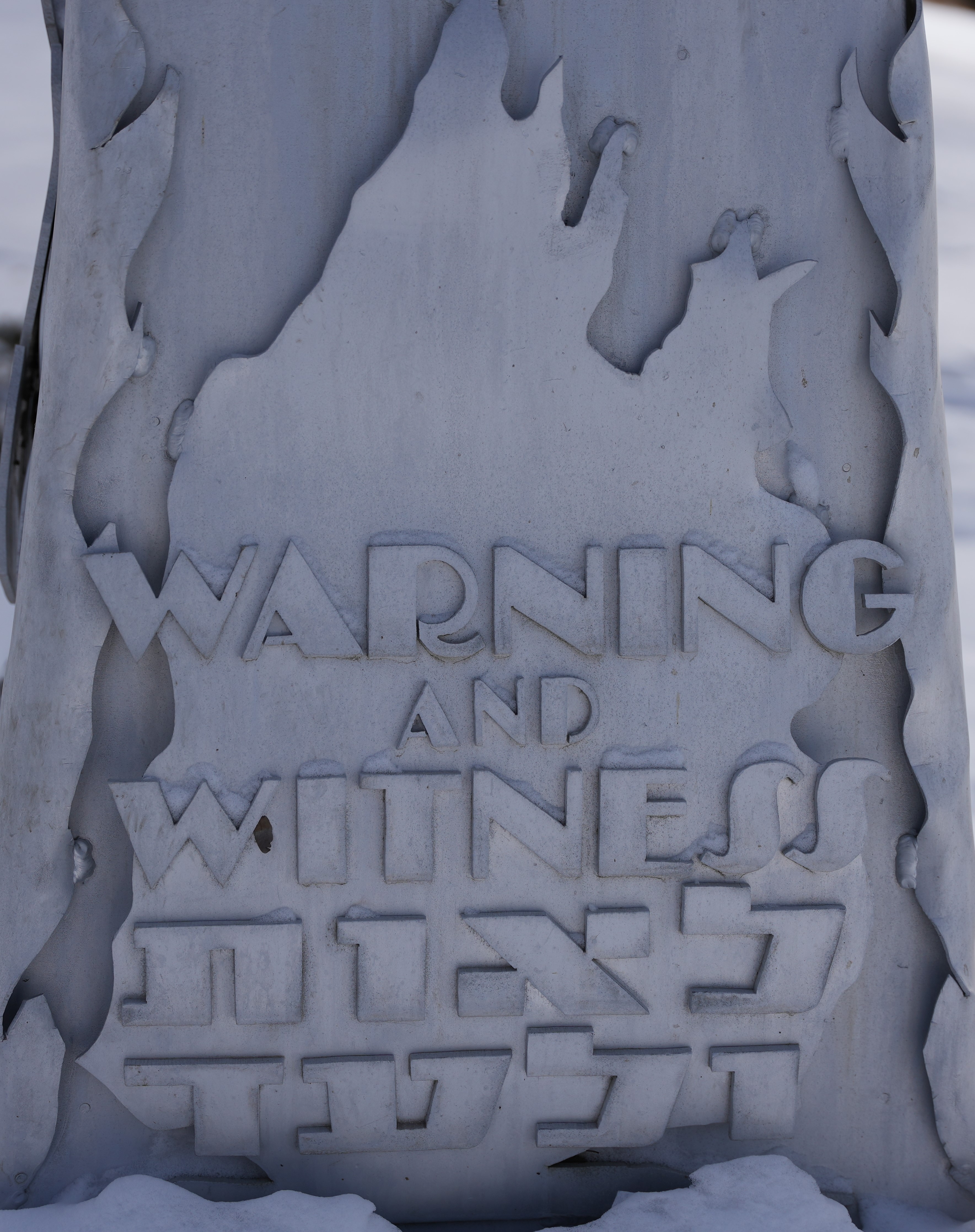 Kansas City became home to many Holocaust survivors after World War II ended thanks in part to the support of the city's Jewish community. In 1958, a group of local Holocaust survivors came together to consider ways to create a memorial and support other efforts to preserve history and strengthen the Jewish community in the Kansas City area. The group met with the Executive Director of the Jewish Community Center, Sol E. Margolin, and considered a variety of ideas. The New Americans Club of the Jewish Community Center of Kansas City, otherwise known as The New Americans, was born from this meeting. The meeting also led to plans to create a memorial, originally referred to as the Warsaw Ghetto Monument in 1959. The monument would later be referred to as the Memorial to the Six Million. Demonstrating change over time, the memorial was moved to this location from its original location on Holmes Road after the Jewish Community Center followed the path of residents to suburban Overland Park.

Funding for the aluminum sculpture was organized by the New Americans over the next four years The group commissioned artist Maurice Newman, a native of Lithuania working in Washington, D.C., to design the monument at a cost of $15,000 dollars ($100,000 in 2020). Kansas City resident and former President Harry S. Truman delivered the keynote address at the dedication, and the monument stood on Holmes Road until in 1988 it was relocated to the new Jewish Community Center.

The memorial features many important aspects from both the Holocaust and the Warsaw Ghetto. With symbolic imagery, Newman's artistry encourages the audience to remember the Holocaust and prevent something similar from occurring again. The memorial's inclusion of a detailed map of the Warsaw Ghetto, devoid of its inhabitants, emphasizes the magnitude of the area while also providing remembrance for the Warsaw Ghetto Uprising. Underneath the map, the crowds of people being forcefully herded towards concentration and death camps commemorate those who suffered during the Holocaust, lest we forget how such events began and were perpetuated. The inclusion of two separate exoduses, that of the biblical exodus of the Israelites from Egypt and that of Jews leaving Europe after World War II, offer a symbol of promise and hope for new lives after enduring immense pain. The visage of a warrior within flames depicts the necessity of remembering the Holocaust. The memorial's construction, with the aluminum shaped like rocks at the base, further depicts the rise from the Warsaw Ghetto. Finally, the names engraved on the monument are the names of family members who had died during the Holocaust, further tying the memorial to the local Jewish community while honoring those who had lost their lives.

The memorial is located on the grounds of the Jewish Community Center, known as "The J" to local residents, The Community Center provides many community-building activities and programs, as well as educational programs for the Jewish community in the Kansas City area.

This citywide trail is under construction... more to come