This is a contributing entry for Foggy Bottom Historic District Walking Tour and only appears as part of that tour.Learn More.

Heading north, towards Washington Circle, is a white brick 7-11 convenience store (912 New Hampshire Ave.), which is one of the Historic District's oldest houses (b. 1876). Above the 7-11 you can see a rooftop mural by D.C. artist Kelly Towles. Turning left onto 24th Street, there are four colorful row houses built in 1884. Don't miss Aniekan Udofia's "Foggy Bottom" mural on the left at the Varsity Apartments. The corner of 24th and K Streets once housed a large Catholic school, a convent, a women's refuge, a WWI women's recreation center, and an orphan home, all of which are now gone. 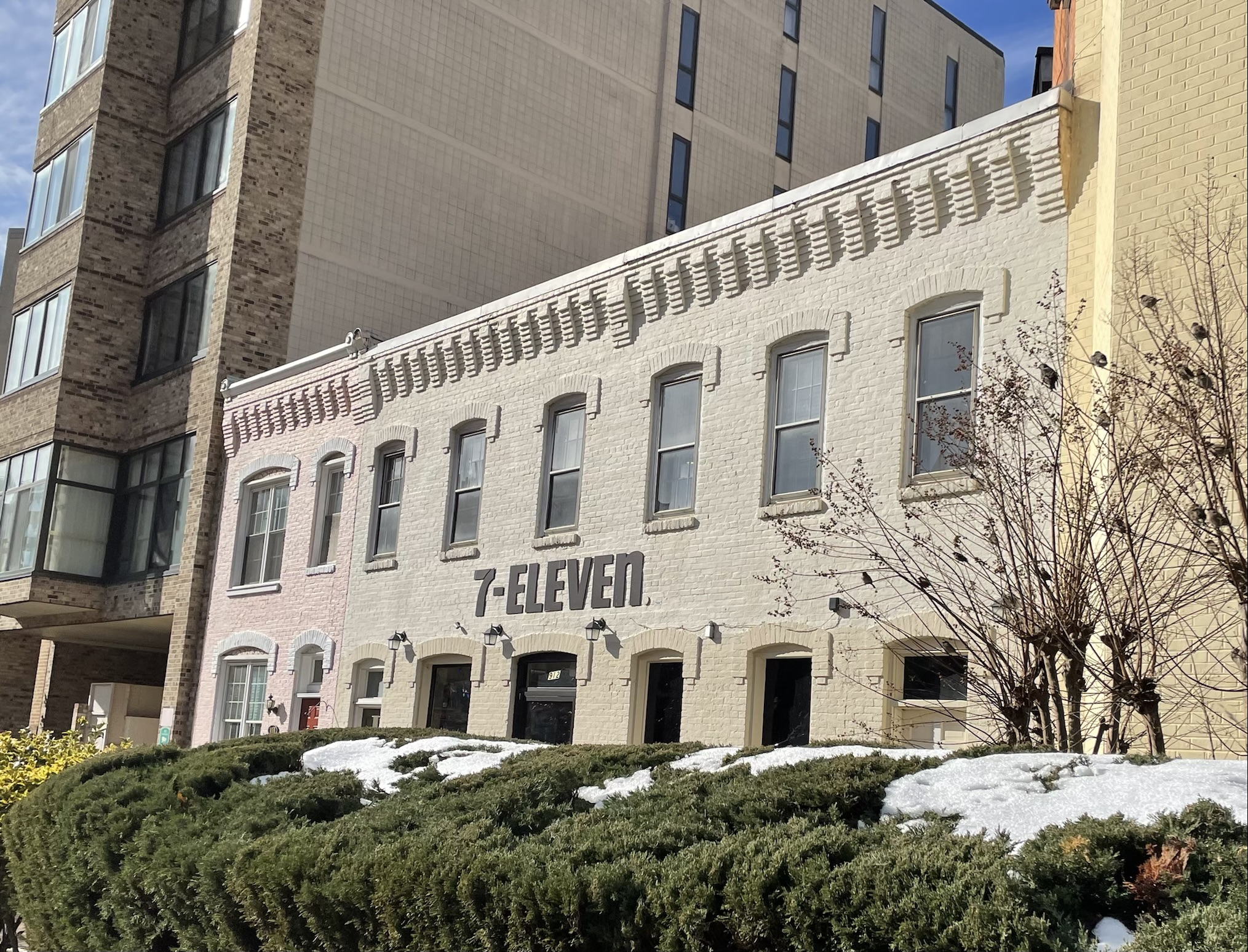 Detail of decorative brick corbels along cornice and arches over windows

Only two historic houses remain on this part of New Hampshire Ave. 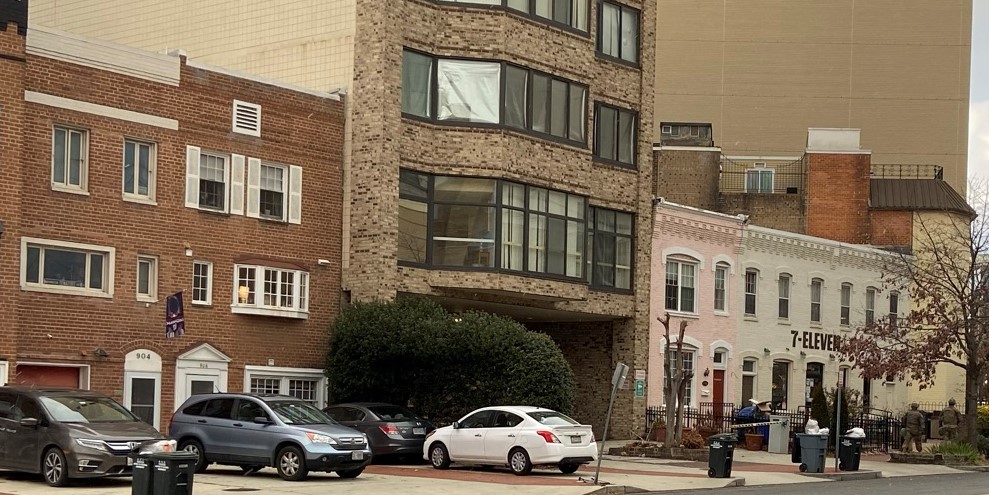 Kelly Towles' rooftop mural above the 7-11, visible from across the street 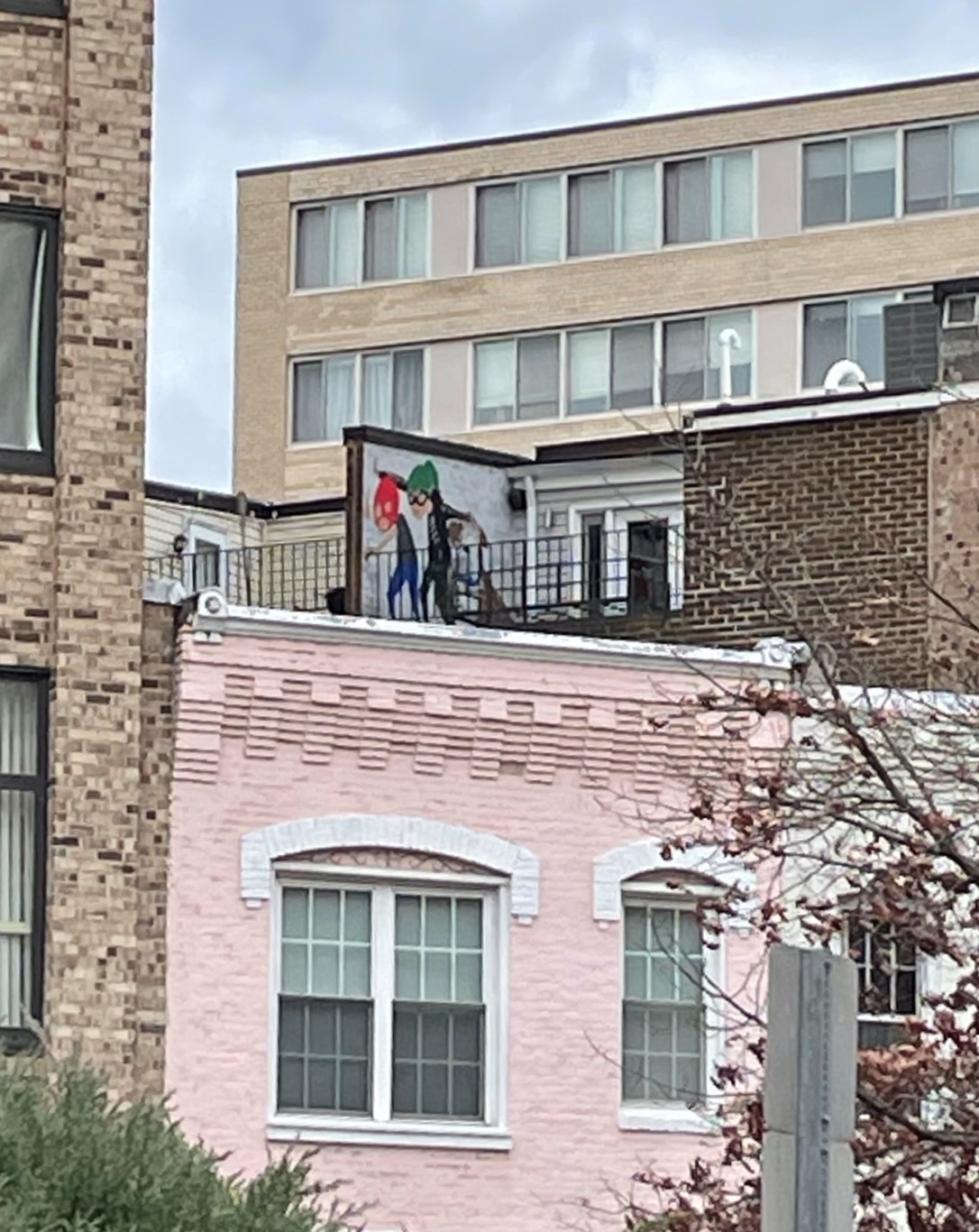 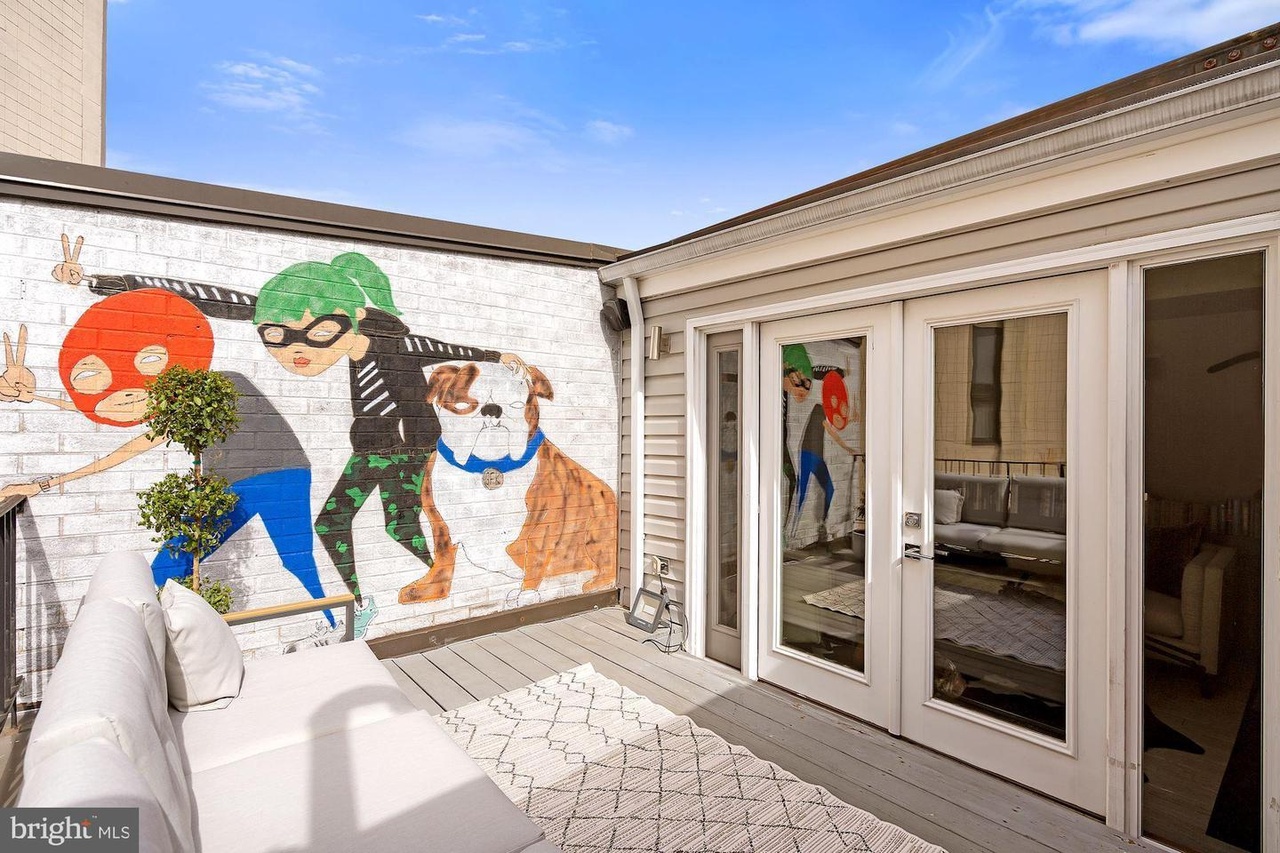 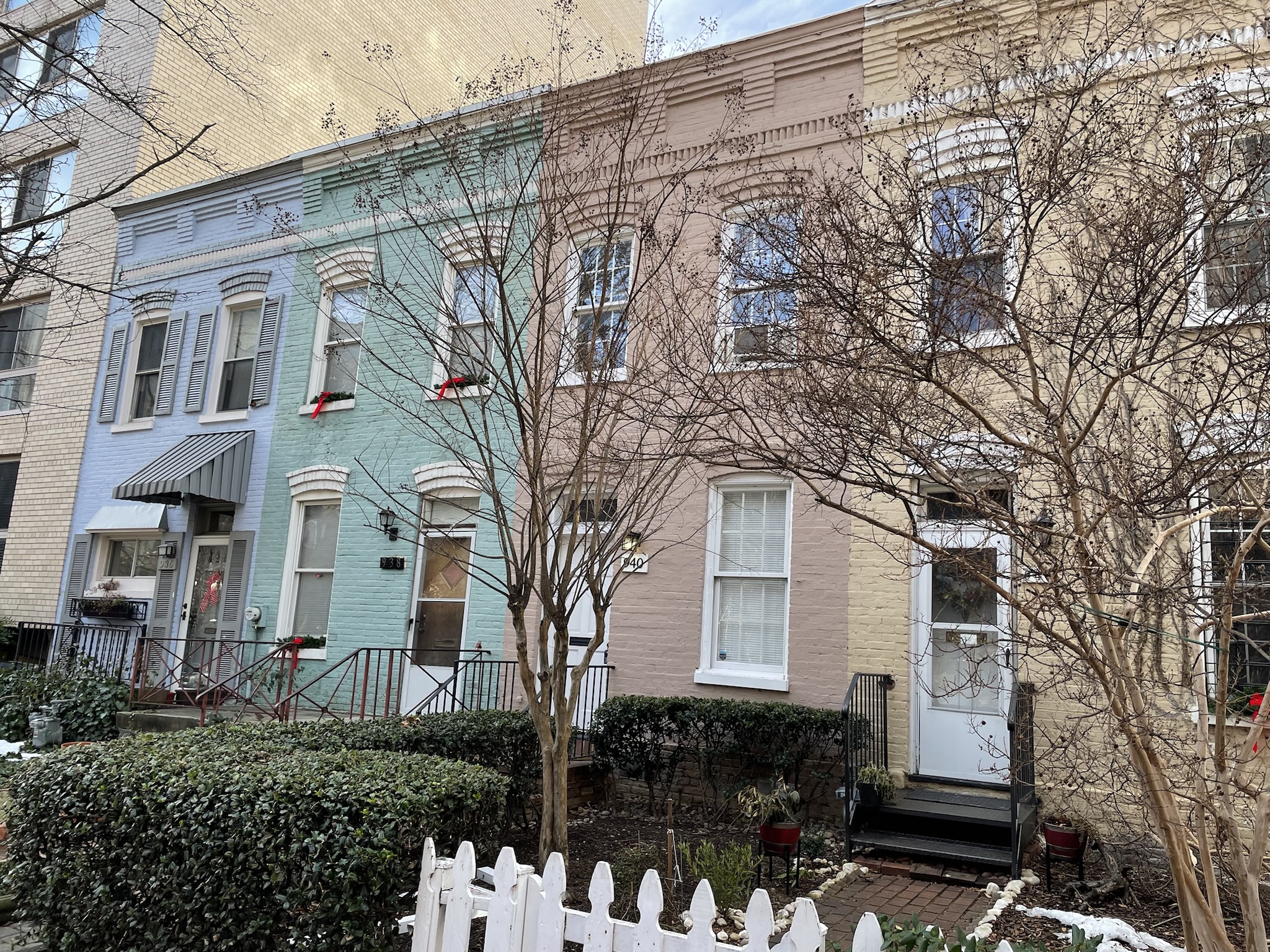 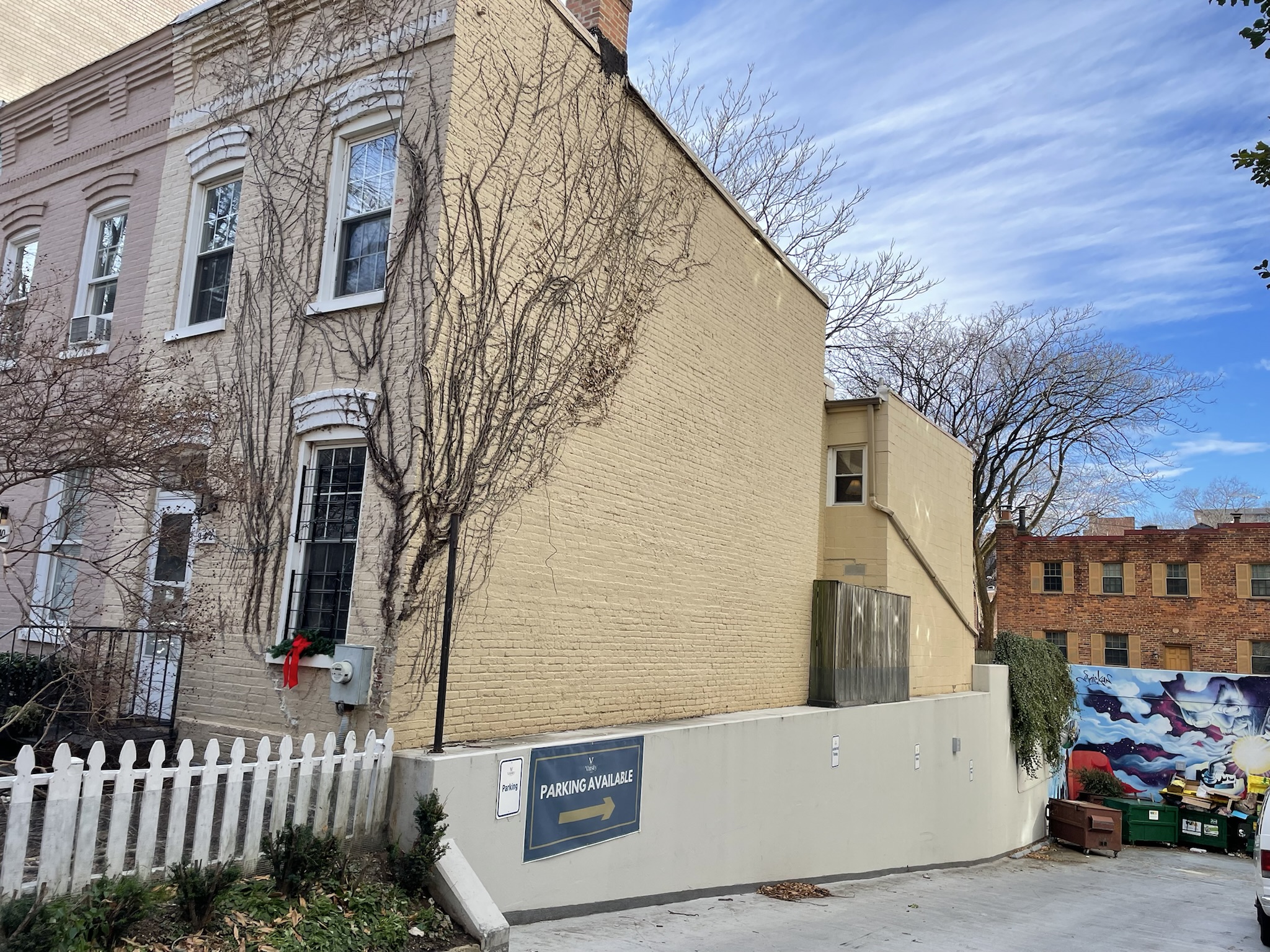 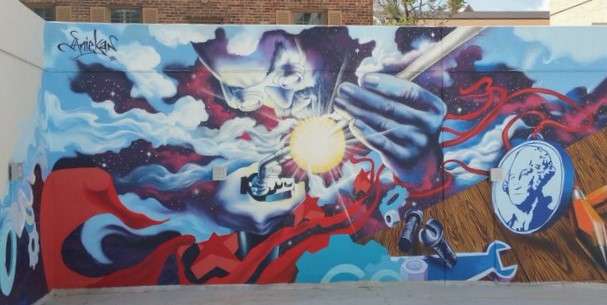 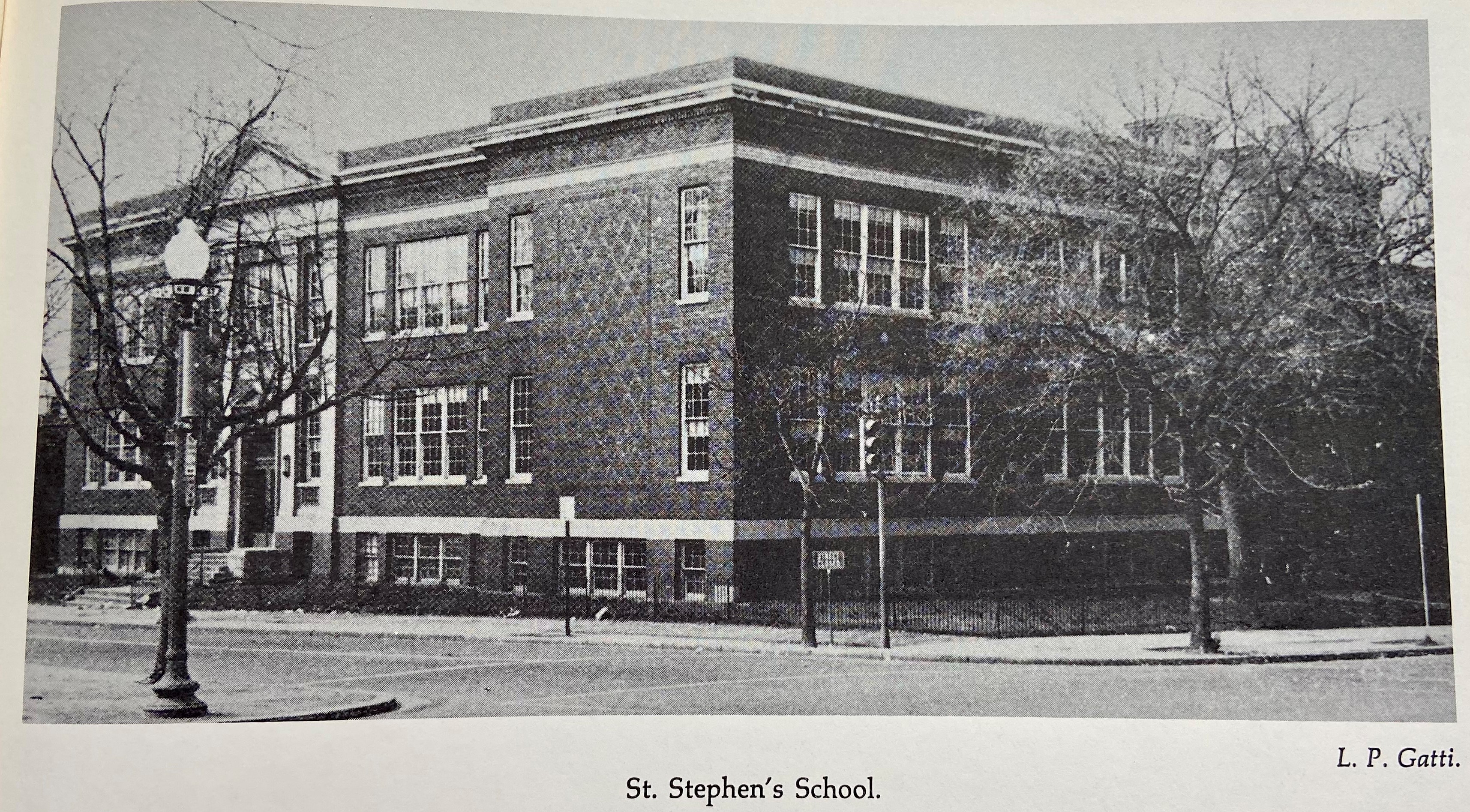 The Immaculate Conception Academy took over the St. Stephen's School 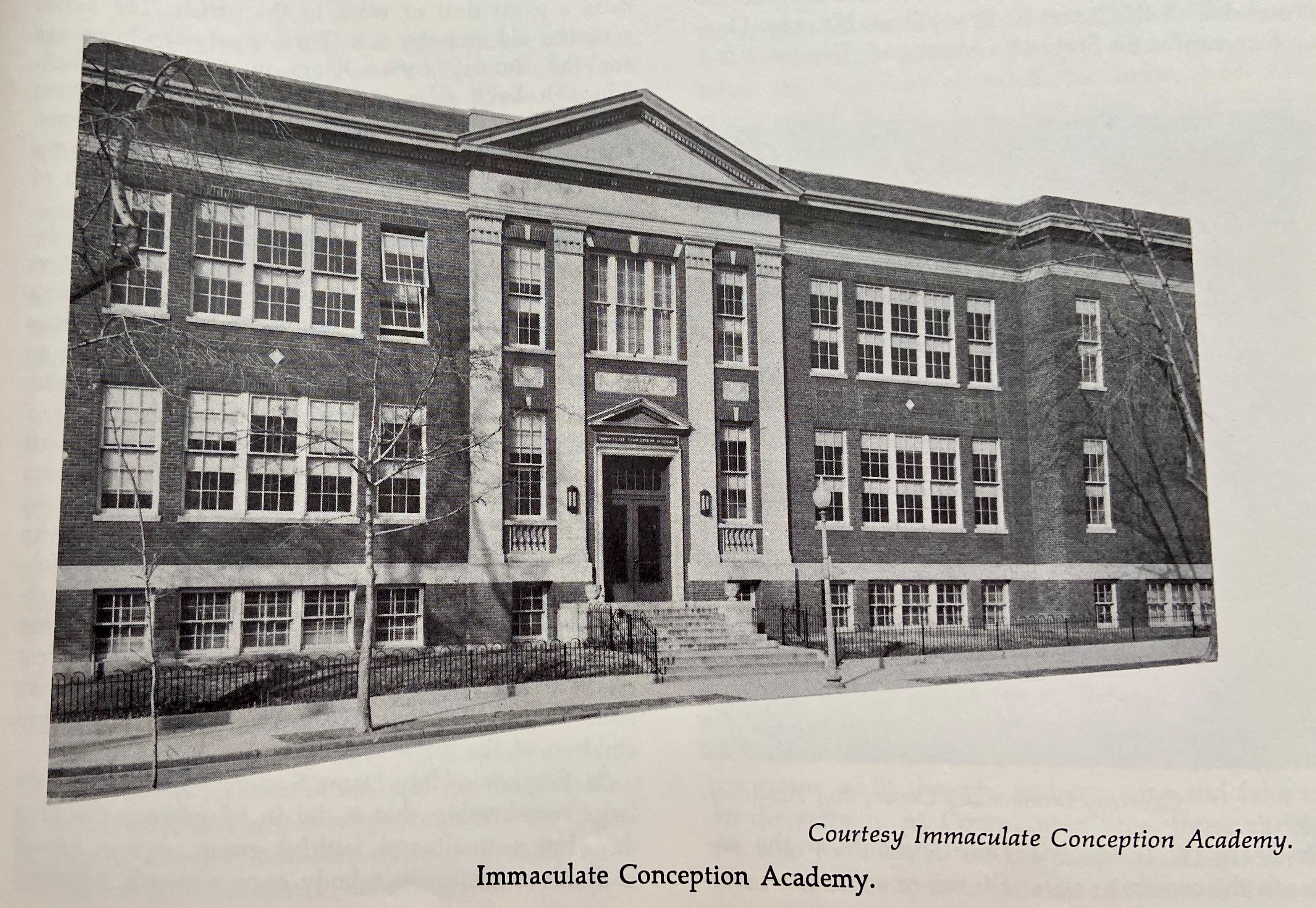 The two-story, six-bay white brick 7-11 store is one of the oldest buildings in the Historic District. It was originally built in 1876 as a dwelling (for C.M. Floyd). It has been used a neighborhood food store for many years. For less than a week in April, 1959, "Beatnik" Bill Walker operated a Greenwich Village-type coffee house, called "Coffee 'n' Confusion" at the site. In 1982, the 7-11 replaced the Nicholas Superette. (Although zoned residential, the commercial use of this building preceded the zoning.) The pink brick house next door (910 New Hampshire Ave.) was also owned by C.M. Floyd, built in 1883. Neighborhood opposition in the 1980s kept that house from operating as a dry cleaners.

Continuing north, there are several new developments. Foggy Bottom Mews (900 24th St.), which extends into Snows Court, was built in 1976. Next is the large Jefferson House Apartment Building, built in 1965 for major D.C. developer Oliver T. Carr, Jr.. It was designed by architects Corning, Moore, Elmore, Fischer and built by Donohoe Const. Co., Inc. D.C. artist Kelly Towles painted a colorful rooftop mural that decorates a Foggy Bottom Mews unit - it is visible above the 7-11, and is best seen from across the street.

24th Street has four colorful historic row houses (Nos. 936-942), which were built for A.D. Elliot by Oliver Cox in 1884. The brick buildings are two-stories and two-bays. They share a continuous frieze running above the top windows connecting the houses. They also feature triple-brick arches over the window and doors, and three retain transom windows over the front doors. The houses back onto Snows Court. No. 942 has an addition reaching into the Court.

The Varsity apartment building (940 24th St.) was built in 1986. The building was originally used as an extended stay hotel, the St. James Suites. It was owned by the Potomac Hospitality Services (PHS) group, the owners of the nearby One Washington Circle and The River Inn hotels. In 2001, GWU signed a 15-year lease to use the building as a dormitory, called "City Hall." It was then converted to apartments.

In 2017, the Varsity funded a mural by artist Aniekan Udofia, who has completed over 30 murals in D.C., including at Ben's Chili Bowl. The mural reflects Foggy Bottom history focusing on the central figure of a glass-blower, a reference to the Glass House, an early Foggy Bottom industry. It shows factory smoke, the D.C. Flag, and George Washington and pencils, references to the George Washington University.

From 1884 to 1911 the site of the Varsity was occupied by St. Savoir, "a place of refuge for fallen women" operated by the Association of the Works of Mercy, Inc. The next owner was St. Stephen Martyr Catholic Church, which is located at the corner of Pennsylvania and 25th St. (north of the Historic District). During World War I, the site was used by Catholic University as place for recreation for single women working for the federal government. It operated as St. Stephen's parochial school from 1921 to 1954. From 1954 to 1985, the building housed the Immaculate Conception Academy, a school for girls run by the Daughters of Charity of St. Vincent DePaul. It also housed a convent for the Sisters of Notre Dame from 1927 to 1954, when the convent was also taken over by the Daughters of Charity. The school/convent was sold, demolished, and replaced by the current apartment building in 1985.

The Daughters of Charity also established the city's first foundling home, St. Anne's Infant Asylum in 1863. It was located across the 24th Street in what is now the GWU Public Health building. President Lincoln signed St. Anne's charter to establish "an institution for the maintenance and support of foundlings and infant orphan and half orphan children, and also to provide for deserving, indigent, and unprotected females during their confinement and childbirth." A maternity hospital was attached to the asylum. The building was demolished in the late 1940s and used as GWU parking lot. St. Anne's is now located in Hyattsville, MD.

The Varsity and the Circle Arms Apartments (2416 K St.) (b. 1964) are not included in the historic district, but the District resumes with historic buildings on K Street.

L. Gatti, printed in Langley, St. Stephens and the Community

Immaculate Conception Academy, in Langley, St. Stephens and the Community

This entry has been edited 35 times.