Also known as the Grand Canyon of Texas, the Palo Duro Canyon located 20 miles southwest of Amarillo is the second largest canyon in the United States. With a length of over 70 miles and a width, on average, of 6 miles (though at some points the canyon is 20 miles wide), the Palo Duro Canyon State Park offers a near endless variety of outdoors activities and sightseeing opportunities. The canyon was formed via water erosion by the Prairie Dog Town Fork of the Red River, and the process took hundreds of thousands of years. Therefore, Palo Duro offers an exclusive peak into the geological history of the Texas panhandle region. Adventurers and outdoors enthusiasts can enjoy over 30 miles of hiking, biking, and equestrian trails, while other visitors can opt to camp at any of the backpacker camping sites, sites with electricity and water, and even the primitive drive-up sites. Going into the canyon for bird watching or overnight trips requires a 820-foot descent, though in some places Palo Duro features a depth of 1,000 feet.

A beautiful overlook at the canyon 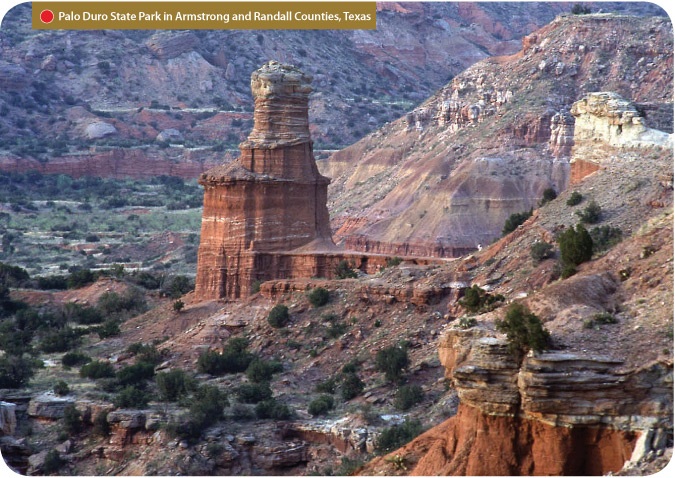 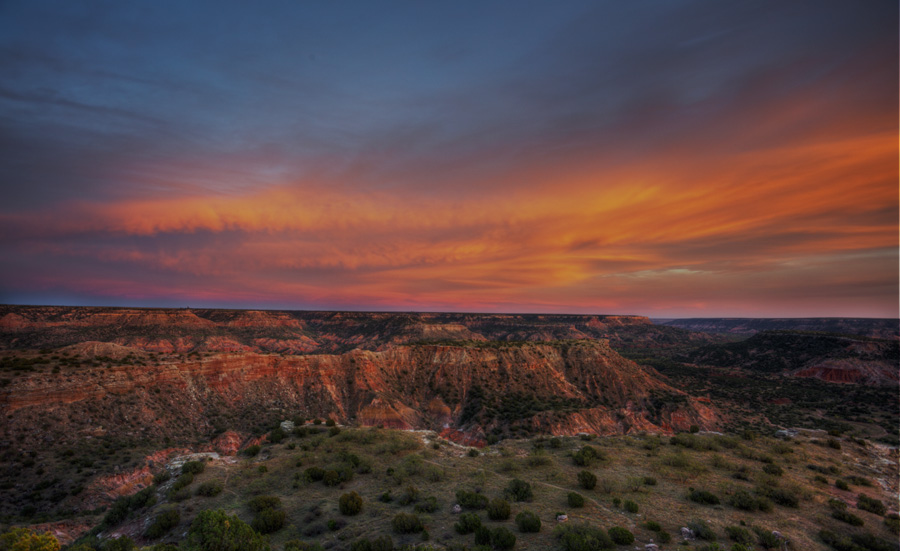 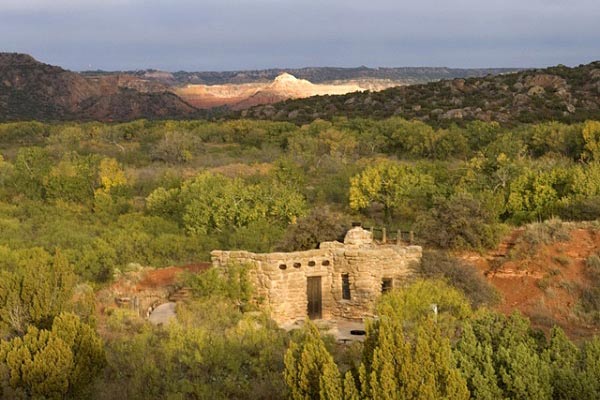 History of the Canyon

Evidence of human habitation found at Palo Duro Canyon has shown that people began living there around 10,000 to 15,000 years ago. Experts state that it was most likely the Clovis and Folsom peoples who lived nearby due to the abundance of mammoth and giant bison. Because of sufficient wildlife, edible plants, and easy access to the Prairie Dog Town Fork and the Red River, Native Americans tribes also thrived in the area more recently.

European settlers first came upon the canyon during the Coronado expedition, and it is estimated that these explorers arrived at Palo Duro around 1541. From the mid-1800s and onwards, when Texas settlement dramatically increased, the United States military conflicted with the Apache, Comanche, and Kiowa tribes who alternately lived within the canyon’s depths. It wasn’t until 1874, during the Red River War, when Colonel Ranald S. Mckenzie attacked a camp of Comanches, Kiowas, and Cheyennes, forcing the tribes to leave the canyon. This marked the end of the Native Americans in the Texas Panhandle area, and most of the tribes were forced onto reservations.

The creation of the Palo Duro Canyon State Park, however, features a less-bloody history, and from 1933 to 1938, the Civilian Conservation Corps developed the area and turned it into a state park. These workers helped develop the El Coronado Lodge (now known as the Visitor Center), several cabins along the canyon rim and throughout the floor, and the 30 miles of trails.1

What to Do at the Canyon

Palo Duro Canyon features a massive range of activities suitable for all ages. Because it’s second only to the Grand Canyon, many visitors come just to enjoy its immense beauty and take pictures from the rim. However, trips to the Visitor Center expose a plethora of exciting, educational, and immersive activities. Also, Palo Duro features several events throughout the year, such as photography workshops, ladies only evening hikes, full moon hikes, trail clean-up days, and so forth.

Some of the most popular activities include hiking, bicycling, and horseback riding. There’s about 1,500 acres in the park set aside for horseback riding, and visitors can bring their own horses (with original Coggins papers) or take a guided tour from the Old West Stables. Hungry hikers exploring the canyon floor should consider stopping at The Trading Post, where they can find souvenirs, drinks, and food.

Between June to mid-August at the Pioneer Amphitheater and featuring nightly shows from Tuesday to Sunday, TEXAS the musical presents a family-friendly show that explores the stories and triumphs of early settlers with dancing, singing, and fireworks.2