Located along Lafayette Street, the DeSoto Site Historic Park preserves what was once the winter campsite of Spanish explorer Hernando De Soto and his army, who arrived in present-day Tallahassee in the fall of 1539. De Soto and his soldiers fought against and enslaved Native Americans as they traveled northwards up the Peninsula. After they arrived in the Tallahassee area, they defeated the Apalachee people and occupied their village. The soldiers also built new structures and fortified the village to defend themselves against attack. In the following Spring, DeSoto and his men travelled northwards to Georgia before heading west, where they eventually reached the Mississippi River.

This historical marker describes the history of the site. 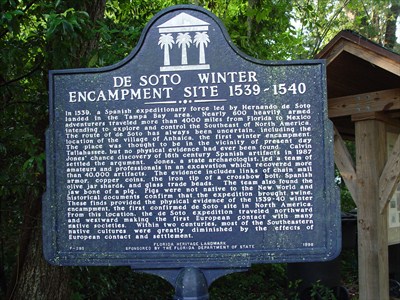 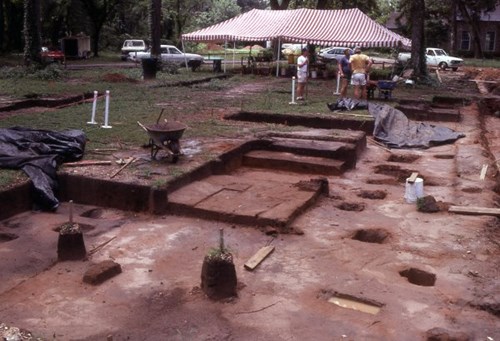 Hernando de Soto was a native of southwestern Spain. Born 1496 in the district of Jerez de Los Caballeros, De Soto was of minor nobility. At the young age of 14, he decided he wanted to become rich off of the New World. Around that same time, De Soto left and traveled to Seville. Here, he managed to persuade Pedro Arias Davila to include him in an expedition in 1514.

Pedro Arias DaVila was one of the most violent conquistadors of his time and was known for his extreme reputation of beheading, murdering, and his unhealthy lust for gold and fortune. When in pursuit of the riches of the natives, he murdered them in such a fashion that when his men became captives of the natives, they were forced to drink molten gold. Eventually, DaVila’s earned the nickname "Pedrarias the Cruel." Even though DaVila was elderly (est. 70 years), he was still attracted by the stories of fortune and the discovery of new lands to the West, so he sailed to the New World in 1514 with Spanish Explorer and Conquistador, Hernando DeSoto.

By 1530, De Soto was the leading slave trader and one of the richest men in Nicaragua as a result from to the fortune he obtained during DaVila's conquest of Panama and Nicaragua. In 1536 De Soto, during a brief stay in his home country, married DaVila's daughter and obtained a royal commission to conquer and settle of what was then known as La Florida.

De Soto was set out from Spain accompanied by 10 ships and 700 men. His expedition landed in Tampa Bay in 1539. Moving inland to settle for the winter, De Soto lead his men north through what is present-day Tallahassee (FL Center). De Soto's time at Anhaica (Tallahassee) was a key turning point in this expedition. While encamped at Anhaica, De Soto changed the expedition to better suit a march towards the interior of the Americas. DeSoto chose this area was chosen because its access to food, supplies and buildings that could be used as a shelter.

The Apalachee grew numerous varieties of corn, pumpkins and sunflowers. They knew the land very well which helped them in gathering wild strawberries, hickory nuts, acorns, saw palmetto berries and persimmons. The Apalachee were known to catch fish and turtles in the lakes and rivers, and oysters and fish on the Gulf Coast. They hunted deer, Black bear, rabbit and ducks, but smoked the meat for storage rather than immediate consumption. This cache of food supplies, along with tools - was acquired due to their sedentary lifestyle of farming, fishing and hunting. Hoping to find gold and riches beyond belief, the expedition to north Florida failed to be fruitful.

After a failed excursion to discover treasure, De Soto decided to head inland. Traveling through Georgia, the Carolinas and Tennessee, he took multiple Indians captives and used them as guides. In 1540, after a failed search for treasures, the expedition was to rendezvous with their ships, but along the way were attacked by the locals. The Spanish killed hundreds of natives and the Spanish suffered severe casualties. However, De Soto managed to survive the conflict.

By mid-1541 the Spanish became the first Europeans to have traveled across the Mississippi River into Arkansas and Louisiana. De Soto made a fateful decision to travel back north in search of treasure once again. In early 1542, the expedition had to turn around due to De Soto becoming ill and soon after passed away. He and his men traveled nearly 4,000 miles of what is now known as the southeastern United States. As Catholics, members of De Soto’s expedition may have been the first to celebrate the first Christmas in the United States.

The park can be visited during daylight hours. There is no entry fee.