Ford’s Theatre is best-known as the site of the assassination of Abraham Lincoln, the 16th president of the United States. Confederate supporter and actor John Wilkes Booth entered the President's box on the evening of April 14, 1865, stood behind the President, and fired his weapon in an attempt to enact revenge on the President for the South's defeat in the Civil War. The theater itself has a history that is both separate from this incident and forever intertwined in the events of April 14th. The building has been used for a variety of purposes and is now home to a history museum as well as an active theater that offers nightly performances. Ford's Theatre and the neighboring Peterson House, where Lincoln died, are part of the Ford's Theatre National Historic Site. The National Park Service oversees operations, preservation, and ranger programs at the site. The Ford's Theater Society offers tours, educational programs, and theatrical performances. 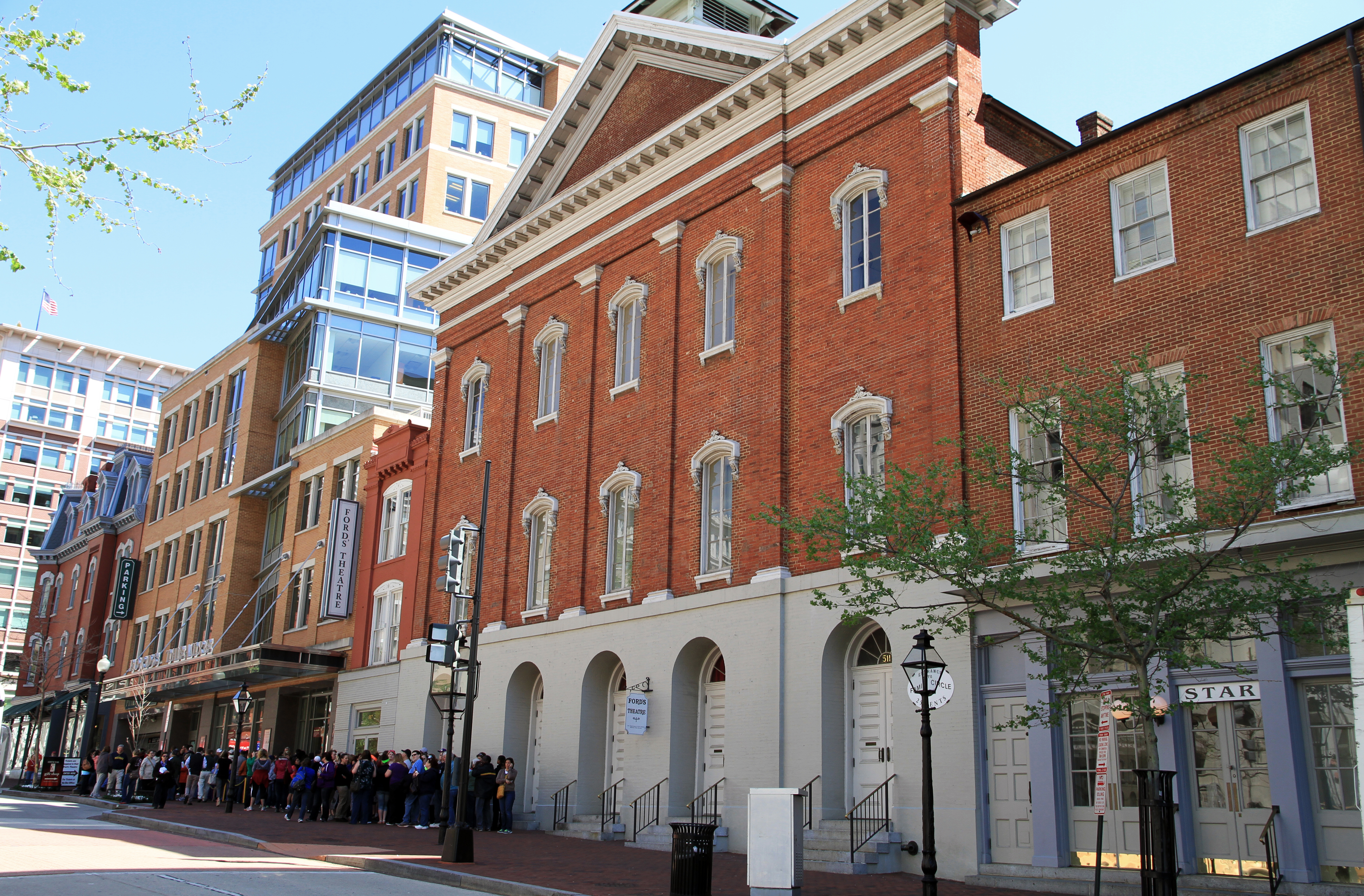 Interior of Ford's Theatre, Washington, D.C. The presidential box is towards the right. Photo by Wknight94 talk. Licensed under CC BY-SA 3.0 via Wikimedia Commons. 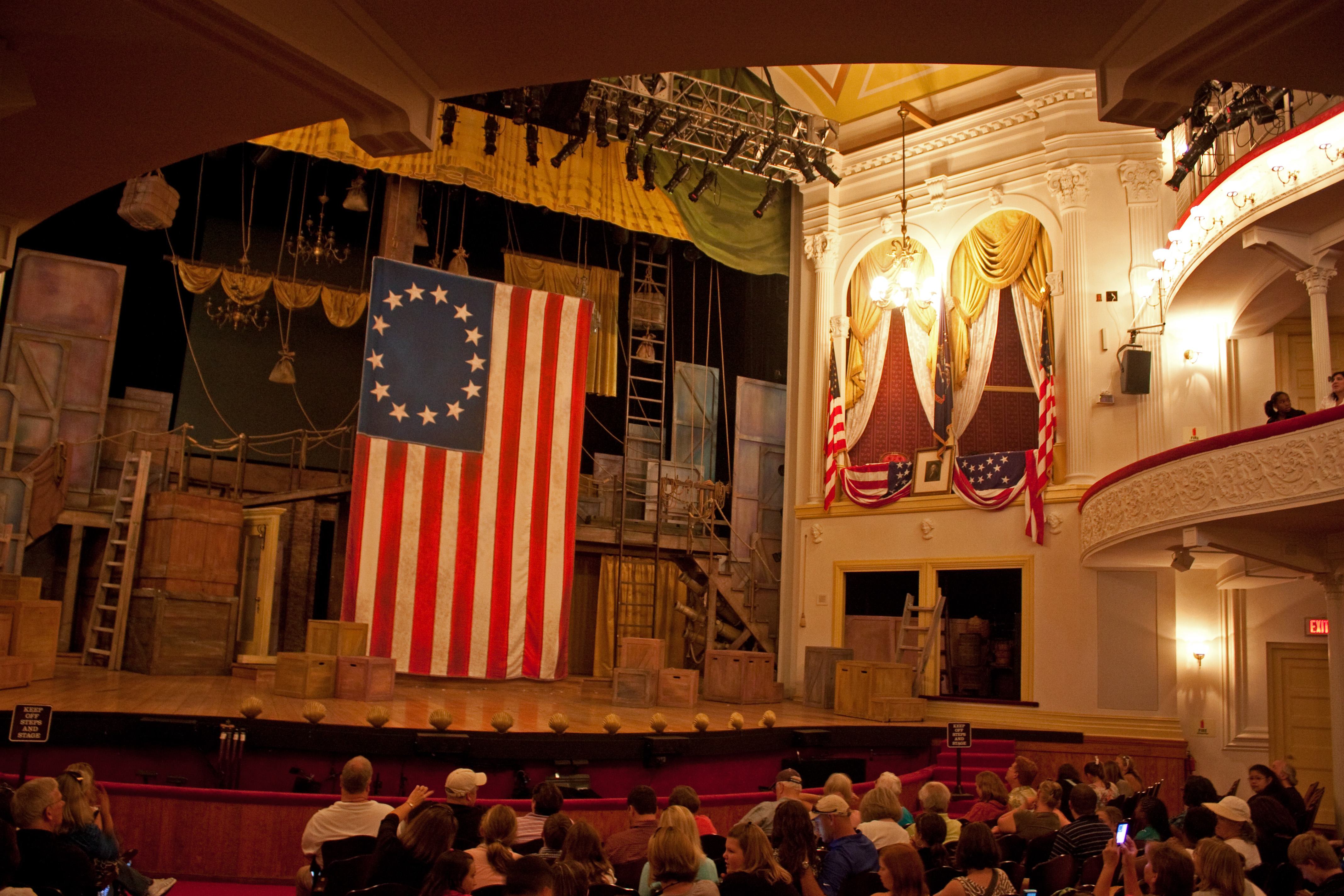 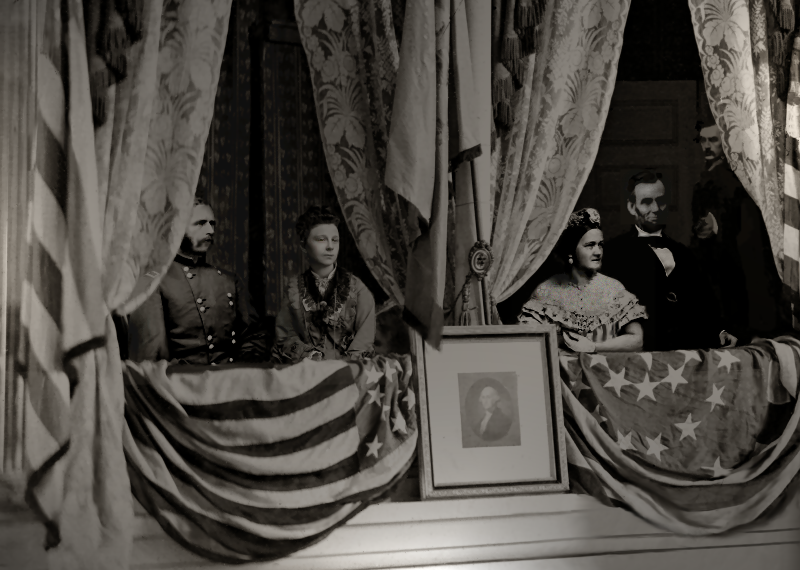 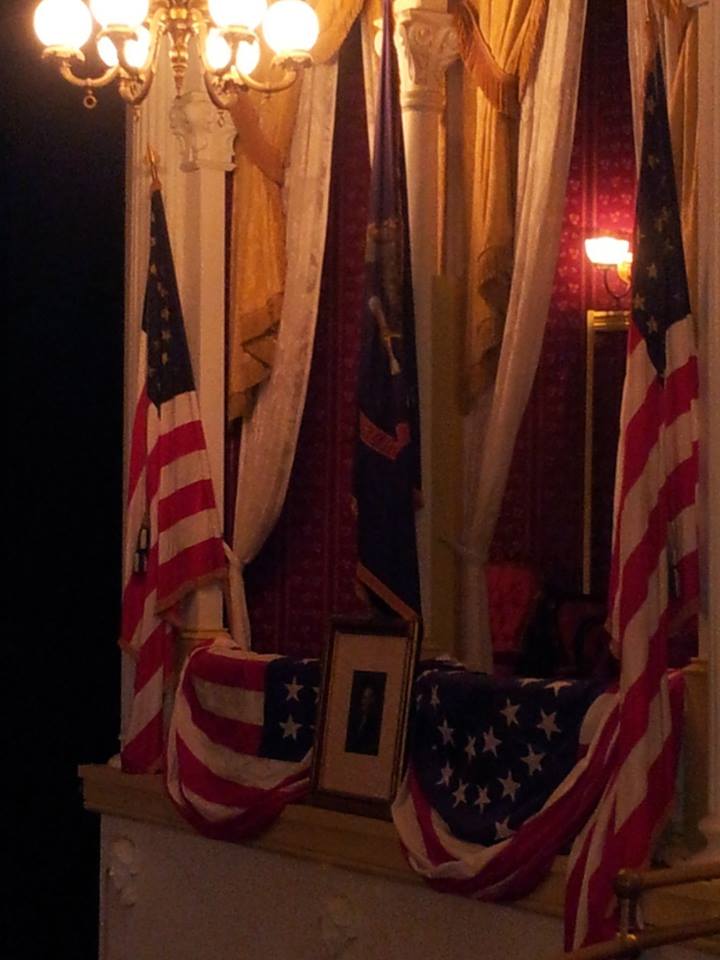 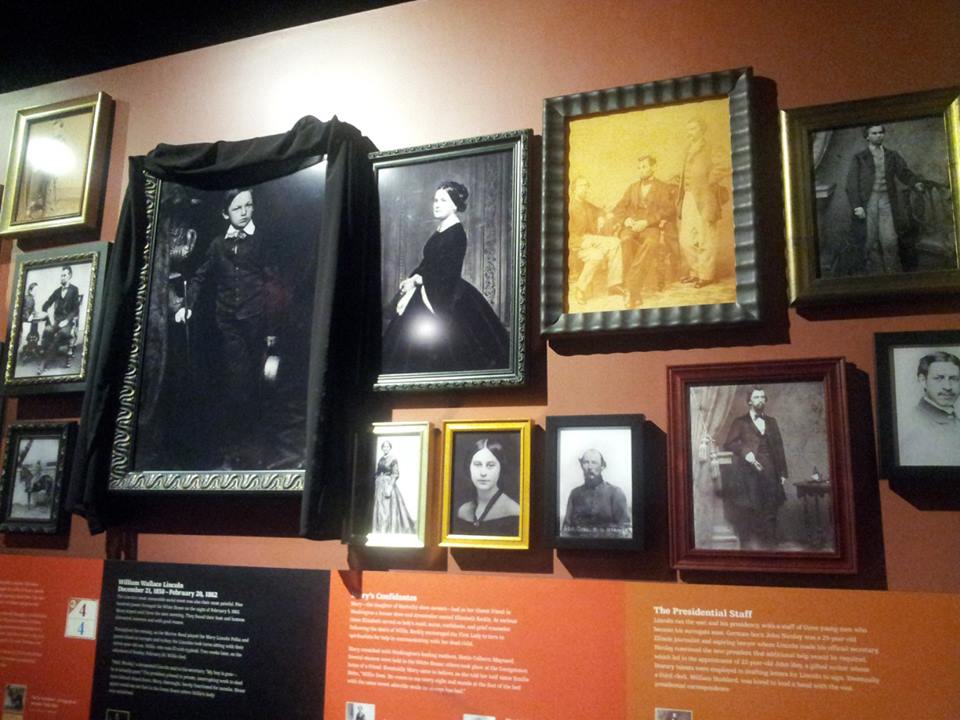 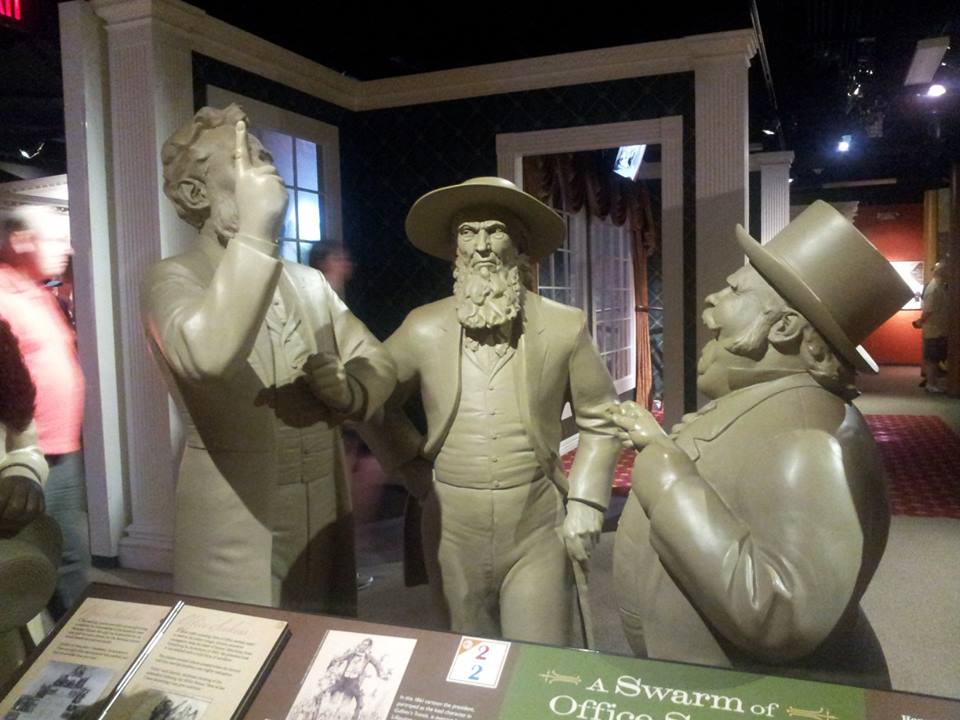 Door to the Presidential Box at Ford's Theatre when President Lincoln was assassinated. Photo Courtesy of Laura Maple 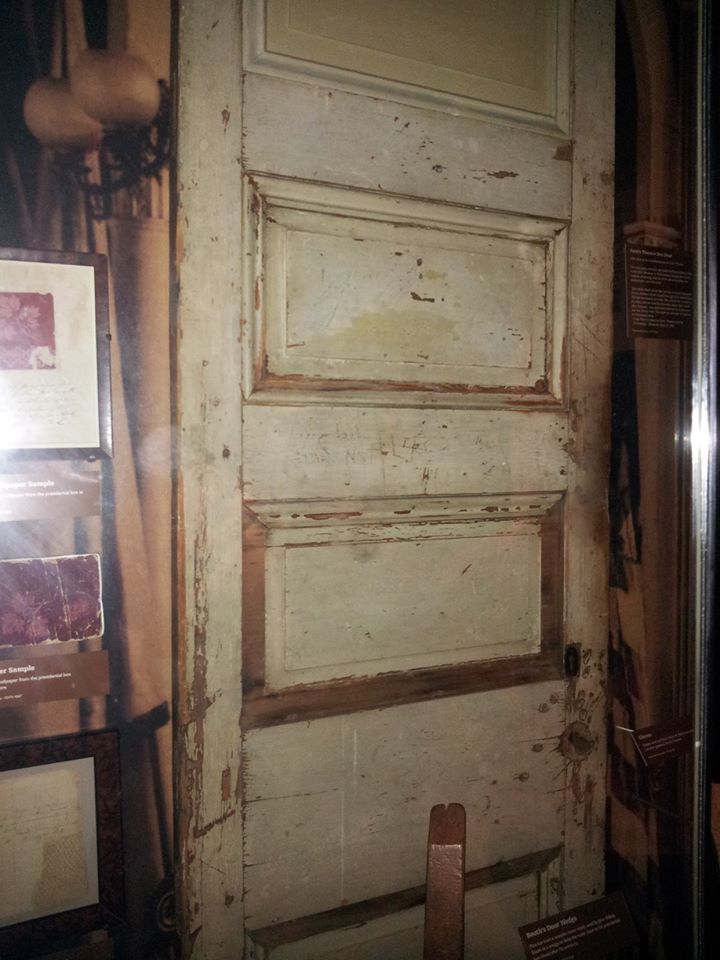 The first building on the site of Ford’s Theatre was the First Baptist Church, also known as the Tenth Street Baptist Church, erected in 1833.  After merging with another church, the empty building was leased and then sold in 1859 to John T. Ford who converted it in 1862 into a theatre named “Ford’s Athenaeum.”  President Lincoln made his first visit to the theatre in its first year.  Lincoln enjoyed going to the theatre, saying it relieved him of the “heavy burden” of the Civil War. That building burned down in 1862 and was rebuilt in 1863.

By 1865, the population of Washington had more than tripled to over 200,000 people, mostly because of the war.  Union soldiers were always entering the city getting supplies and orders.  Ford’s Theatre was becoming surrounded by decadence.  As of 1865, Ford's Theatre was just two blocks away from crime filled neighborhoods.  To the south of Pennsylvania Avenue was “Hooker’s Division,” named after Gen. Joseph Hooker.  Another nearby was a slum called “Murder Bay.”  As the population of soldiers grew in those neighborhoods, so did the numbers of “gamblers, hustlers, pickpockets, bootleggers, and prostitutes.”

On April 14, 1865, President Lincoln and his wife Mary Todd Lincoln arrived at Ford's Theatre to enjoy a new play from England called Our American Cousin. The Lincolns shared the State Box with Major Henry Rathbone and his fiancee, Clara Harris.  At about 10:25 pm, Navy Surgeon Dr. George Brainerd Todd witnessed a man referred to as “Booth” enter the doors to the Presidential Box. The man was famous actor John Wilkes Booth.  The entrance into the Presidential Box was two sets of doors.  After entering the outer doors, Booth was able to peer into the box through a hole carved into one of the doors, a hole he carved himself while planning the attack. Booth chose as his cue a key moment in the play, the speaking of the word “sockdologizing.” This humorous word drew loud applause which could disguise the sound of a gun.  The famous actor turned-assasin fired a bullet from a single-shot .44 caliber Derringer pistol point-blank into the back of Lincoln’s head.  Booth’s easy access inside the theatre and past various guards is attribuared to his celebrity—even Lincoln had complimented Booth’s acting in the past.  But Booth was enabled by the president’s lax personal security.  His bodyguard, policeman John Frederick Parker, had left his post during intermission to go have a drink and did not return.

After the shot, Booth dropped his pistol and knifed Major Rathbone, who attempted to capture him.  In the struggle, Booth leaped 12 feet off the balcony onto the stage, injuring his left foot upon landing.  Booth allegedly yelled “Sic Semper Tyrannis” (latin for “thus always to tyrants”) to the crowd and then escaped out a side door where his escape horse was being held by Joseph “Peanuts” Burroughs.  Booth’s actual words were disputed by eye-witnesses. Rathbone said he heard the word “freedom.”  Some said they heard only “Sic Semper.”  Other claimed English phrases such as “The South is Avenged,” “Revenge for the South,” “The South Shall Be Free,” and “I have done it.” Meanwhile, President Lincoln had slumped over from the shot, technically alive but mortally wounded. His body was carried across the street to a boarding house known as the Peterson House. Despite being attended by numerous doctors, Lincoln died of his wounds the next morning.

Despite the national trauma of Lincoln’s assassination, troubles for Ford’s Theatre were just beginning.  Months later, John T. Ford tried to reopen the theatre with a presentation of “The Octoroon,” but public outcries and a military order kept the doors closed.  The next year, Ford sold the building to the federal government for $88,000.  The building’s interior was removed and converted into an office building.  In 1866, an Army Medical Museum was moved to its third floor until 1887 when the whole building became a clerk’s office for the War Department. In 1893, the installation of an electric light plant required 12 feet of excavation beneath the basement floor.  Work in the offices continued despite worker concern for safety.  A support pier failed, collapsing three floors and killing 24 clerks and injuring 81 others.  The unpopular Colonel Fred C. Ainsworth was blamed for the deaths but charges were dropped when an inquest failed to prove he knew the building was unsafe.  The building was quickly rebuilt as a warehouse with the addition of the Government Printing Office inside.

In 1932, on the president’s 123rd birthday, the Osborne Olroyd’s Lincoln Museum was added and the building became a National Historic Site. The next year it was taken over by the National Park Service. In 1964, decades of lobbying in Congress paid off as funds were approved for the restoration of Ford’s Theatre to its 1865 appearance.  The 1968 reopening was followed by the 1970 formation of the park site known today as Ford’s Theatre National Historic Site—created by the addition of the Petersen House.  The theatre underwent another renovation and reopening in 2009 complete with a ceremony commemorating Lincoln’s 200th birthday.

Today, the museums in Ford's Theatre and the Peterson House offer an insightful look into Lincoln's life and death. The theatre also honors Lincoln's love for the performing arts by producing plays and musicals.


Artifacts To See In The Museum