This is a contributing entry for Chateau Society historical markers tour and only appears as part of that tour.Learn More.

The Chouteaus were one of the most prominent families of early American Missouri. They largely had a monopoly on trade with Native American groups near St. Louis for many years and this trading post was established near the height of their power. This post changed locations several times, but always remained within the modern day Kansas City area. It was founded and initially led by second generation Missouri Chouteau, Francois. He went on the play a large role in some of the initial farming and real estate developments of Kansas City.

English side of the marker, courtesy of William Fischer Jr 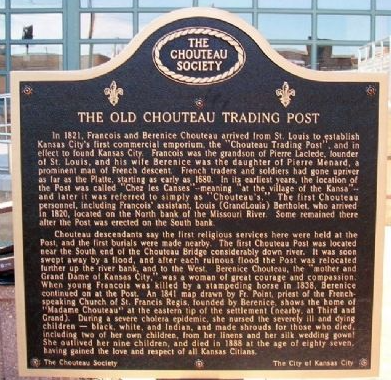 French side of the marker, courtesy of William Fischer Jr 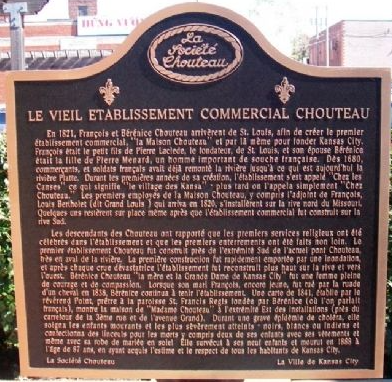 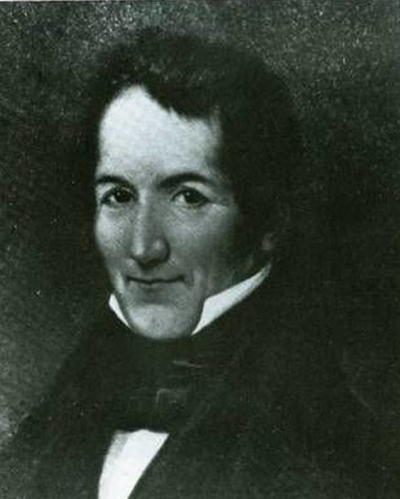 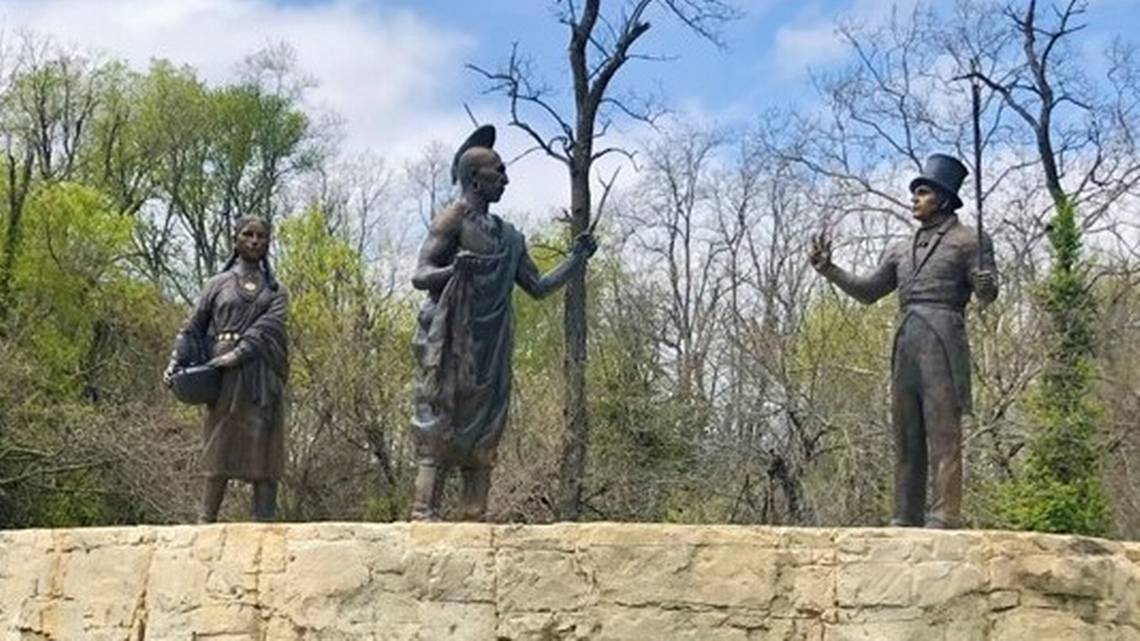 The Chouteau’s were a prominent family that first moved to the small frontier town of St. Louis in 1765, just as it was changing hands from French to Spanish. Despite this, the two Chouteau brothers: Jean-Pierre and Auguste quickly asserted themselves as prominent traders in the region, and they developed many close working relationships with nearby Native American people groups. Both the Americans and the Spanish recognized the value of the family and tried to utilize them for their own goals. The Chouteaus provided material and personnel assistance to the Lewis and Clark Expedition, and they served as a third party mediator between the United States and various Native American groups.

Jean-Pierre Chouteau sired a son he named Francois who was sent as a teenager to apprentice under his step cousin Liguest Chouteau who had been living and trading with the Osage people in southeastern Kansas since 1812. While he was there Francois learned the business of trading and the skills of a frontiersman. Also during this period, he met and courted Bernice Menard, and they married in 1819. She was the daughter of Pierre Menard, who was a very prominent French trader along the Mississippi at the time. She lived in St. Louis and for the first two years of their marriage they lived mostly apart, connected by the Missouri and Kansas rivers only meeting occasionally when Francois made trips to St. Louis. During this period Francois and his business partners went about constructing trading posts along the Kansas and Missouri rivers.

The first trading post was built twenty-six miles up the Kansas river, near modern day De Soto, Kansas. This location struggled with a lack of business and the trade post was moved to the north bank of the Missouri river near modern day Chouteau bridge in Kansas City. After this post was established, Francois moved Bernice and their children out to him in the fall of 1822. They lived there for a few years until it was destroyed by a flood in 1826. Francois and his family then moved around to several trade posts along the Kansas and Missouri rivers, all near or in the modern day Kansas City metro area. By 1828 the fur trade in the United States had become incredibly competitive and animal populations were declining from overhunting for pelts. In many regions the markets were dominated by a single trader who ran monopolies over a declining industry. By 1830 Francois was actively expanding out of the fur trade and into other ventures. He was involved in Indian Affairs with the U.S. government, and he heavily invested in real estate development in the Kansas City area to create farmland and areas for settlers. This has led to him largely being credited as the original founder of Kansas City.

The text of this historical marker reads as follows:

In 1821, Francois and Berenice Chouteau arrived from St. Louis to establish Kansas City's first commercial emporium, the "Chouteau Trading Post", and in effect to found Kansas City. Francois was the grandson of Pierre Laclede, founder of St. Louis, and his wife Berenice was the daughter of Pierre Menard, a prominent man of French descent. French traders and soldiers had gone upriver as far as the Platte, starting as early as 1680. In its earliest years, the location of the Post was called "Chez les Canses" -- meaning "at the village of the Kansa" -- and later it was referred to simply as "Chouteau's." The first Chouteau personnel, including Francois' assistant, Louis (GrandLouis) Bertholet, who arrived in 1820, located on the North bank of the Missouri River. Some remained there after the Post was erected on the South bank.

Chouteau descendants say the first religious services here were held at the Post, and the first burials were made nearby. The first Chouteau Post was located near the South end of the Chouteau Bridge considerably down river. It was soon swept away by a flood, and after each ruinous flood the Post was relocated further up the river bank, and to the West. Berenice Chouteau, the "mother and Grand Dame of Kansas City," was a woman of great courage and compassion. When young Francois was killed by a stampeding horse in 1838, Berenice continued on at the Post. An 1841 map drawn by Fr. Point, priest of the French-speaking Church of St. Francis Regis, founded by Berenice, shows the home of "Madame Chouteau" at the eastern tip of the settlement (nearby, at Third and Grand). During a severe cholera epidemic, she nursed the severely ill and dying children - black, white, and Indian, and made shrouds for those who died, including two of her own children, from her linens and her silk wedding gown! She outlived her nine children, and died in 1888 at the age of eighty seven, having gained the love and respect of all Kansas Citians.

Long before Kansas City was a bustling American midwestern metropolis, it was a colonial frontier claimed by the French crown as part of the Mississippi river drainage basin. The French used the vast territories under their nominal control to exploit natural resources for profit, namely fur. French traders traveled deep into the American territories along the Mississippi and its tributaries in order to establish forts and trade posts to trade with the Natives. This arrangement lasted from the mid seventeenth century up to the mid eighteenth century when they lost or sold all their North American territory save for the small fishing settlements on the islands of St. Pierre et Miquelon. This storied French heritage has been partially preserved in the Kansas City area by the work of the Chateau Society. Originally organized in 1984, this group has acted to preserve the memory of Missouri’s French past by placing a series of eleven plaques around the Northern Kansas City area. Two of the plaques are much farther south in Westport. These plaques feature both English and French inscriptions, and they cover various important topics and locations around Kansas City important to French heritage. The Chateau Society ceased operation in 2008, with its responsibilities and upkeep of the plaques taken over by the Jackson County Historical Society.