The Waco Suspension Bridge is Waco’s oldest single-span suspension bridge. The bridge is significant because played a central role in the city’s transformation from a Texas frontier village to a major commercial center. Connecting Indian Spring Park and Doris D. Miller Park, the bridge endures as a popular pedestrian walkway and Waco landmark. Built in 1869 with over 3 million bricks, the bridge spans nearly 475 feet over the Brazos River. Historically, the Brazos River was both a blessing and a curse for the early village. It provided essential resources to the community, but the river’s fast currents and deep waters proved dangerous for cattle drivers. Before the completion of the bridge, cattle drivers and others would have to travel further up the trail and ford the river at shallow points or use the ferry. Costing between $135,000 and $141,000 (equivalent to about $2.5 million today), the bridge was the longest single-span suspension bridge in the world at that time. Stagecoaches, cattle drives, and pedestrians frequently traversed the bridge in its early days, and the bridge continued operating until 1971. The Waco Suspension Bridge was listed on the National Register of Historic Places in 1970. 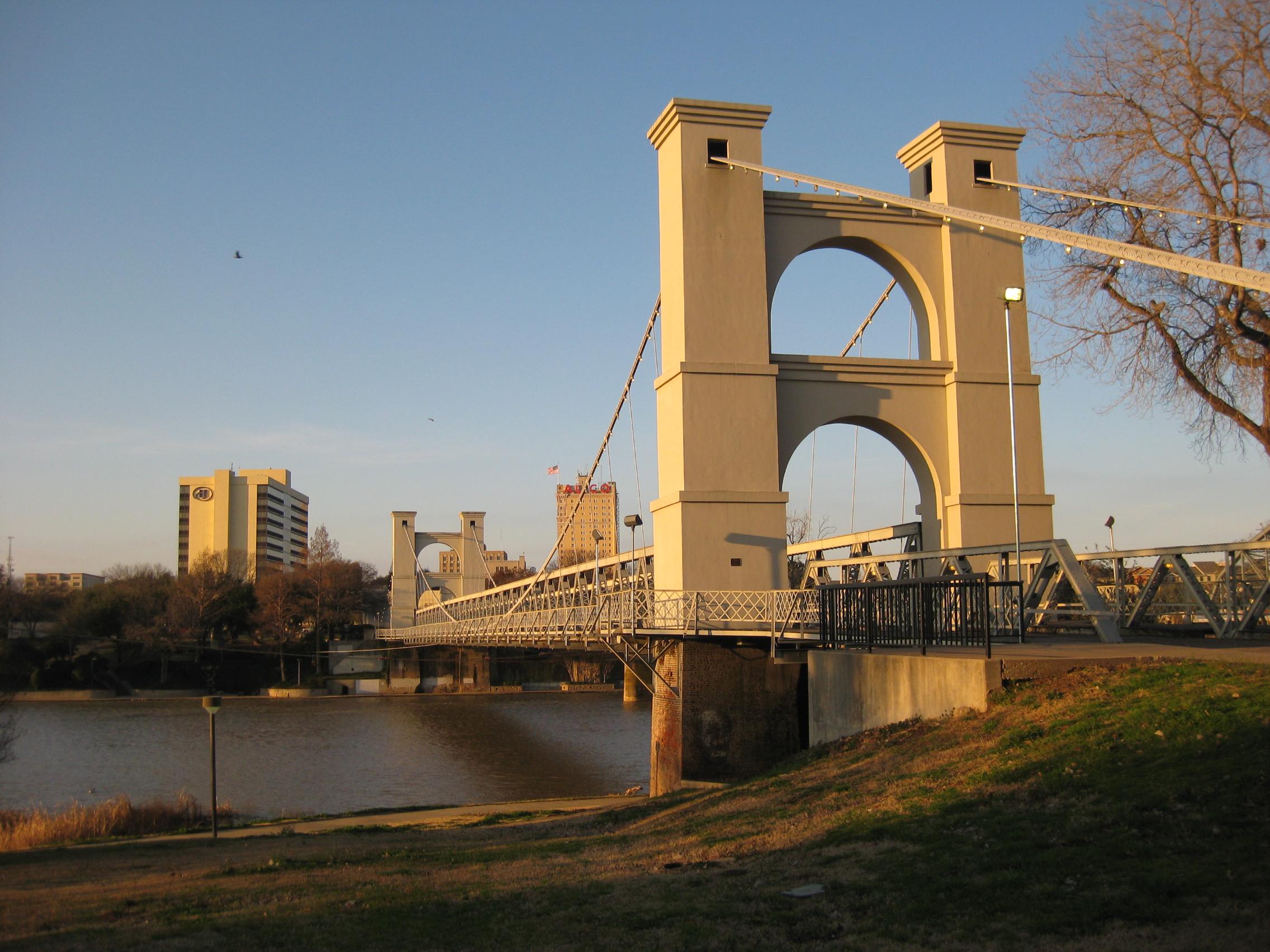 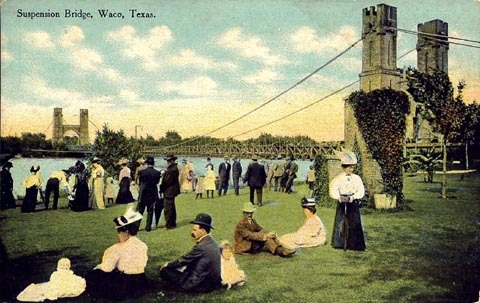 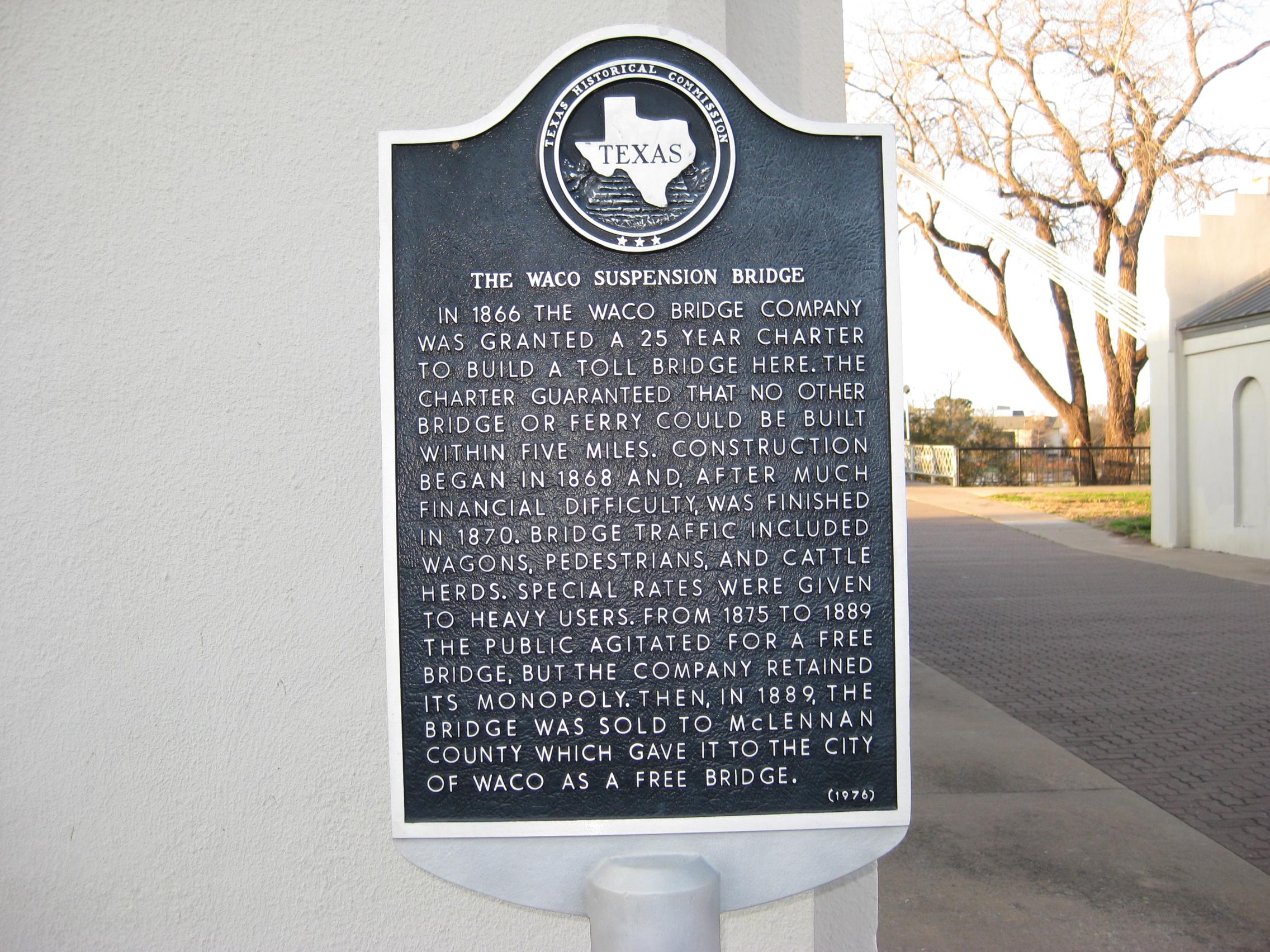 History of the Waco Suspension Bridge

In the years following the Civil War, Waco community leaders and businessmen were searching for ways to stimulate the local economy and empower the town. Before 1870, cattle drivers traveling between the Texas and Kansas on the Chisholm Trail struggled to cross the wide Brazos River, and the river was stunting Waco’s potential for economic growth.

In 1866, Joseph Warren Speight introduced a suspension bridge project aimed at economic stimulation, and that same year, Texas legislature incorporated the Waco Bridge Company, giving them exclusive bridge rights for any traffic crossing the Brazos within five miles of Waco.

The Waco Bridge Project and its president, John T. Flint, hired Thomas M. Griffith of New York to be the project’s civil engineer, and Flint also commissioned cables and from John A. Roebling and Son from New York, a firm that would eventually build the Brooklyn Bridge in 1883.1

Supplies for the bridge came from Galveston, Texas, (about 212 miles away), which were then ferried on a steamer to and pulled by ox and wagon to Waco along ill-suited dirt roads. Using nearly 3 million bricks, the Waco Suspension Bridge was completed in 1869, and it opened to the public and collected its first toll in 1870. Although many people spoke harshly against the tolls, the bridge earned about $25,000 annually, and the Waco Bridge Project was able to pay off its loans fairly quickly.

In 1889, McLennan County purchased the bridge, removed all tolls, and sold the bridge to the City of Waco for $1. Waco would then take responsibility for all maintenance of the bridge. The popularity of cars mandated a massive reconstruction project in 1913 and 1914, and by 1971, the Texas historical committee retired the bridge and made it a pedestrian walkway, which is still highly popular today.2