A National Historic Landmark, Moundville is one the most historically significant ancient sites in the United States. It dates from 1000-1450 A.D. and is the second-largest site of the classic Middle Mississippian era, after Cahokia, which is located in Illinois. Moundville features well over two dozen mounds, encompassing an area of several hundred acres, about 185 of which comprise the Moundville Archaeological Park. The University of Alabama manages the site and also operates a museum here, which opened in 1939. The largest earthworks are mounds A and B, the latter being the tallest at 58 feet high. The smaller mounds were likely used for ceremonial and mortuary purposes and the larger ones possibly had the homes of upper classes on top. The museum features numerous artifacts from the site on display.

Moundville Archaeological Park was established in 1933, preserving one of the most important ancient sites in the country. 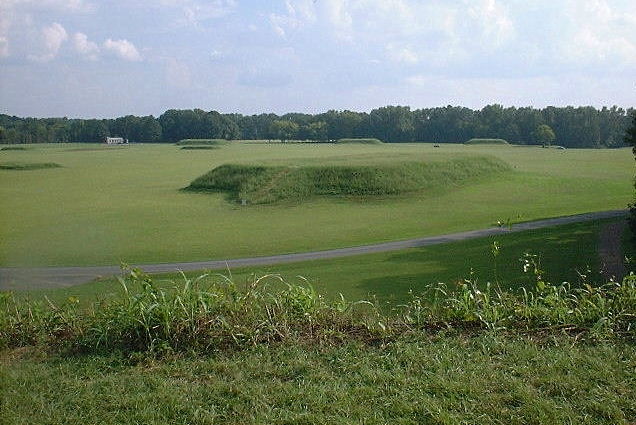 At its peak, Moundville had a population of about 1,000 and was protected by a wooden palisade on three sides; the Black Warrior River served as the fourth side. Archaeological excavations have revealed many dwellings and other structures and burials. Shells, pottery, stonework, as well as rare luxury goods such as copper, mica, and galena have been discovered. The differences in burials demonstrates how stratified site was, as those with luxury goods were part of the upper classes, which of course includes the leader or chieftain at the very top. As with other large ancient sites, Moundville had enormous sway over the surrounding valley in which roughly 10,000 people lived. It is speculated that these people gave tribute to Moundville in the former food and labor. Cultivation of maize was the site's main economic driver, as it gave inhabitants a surplus of food in which to trade. By 1350, Moundville was no longer a town but remained an important religious and political center. By 1500 it was essentially abandoned. It is not known why Moundville declined (or how it exactly emerged). The site became a park in 1933.