Originally cast in 1904, the Vulcan statue is the largest cast iron statue in the world, and is the city symbol of Birmingham, Alabama, reflecting its roots in the iron and steel industry. Standing atop Red Mountain, it is the seventh-tallest free-standing statue in the United States. It was designed by Italian artist Guiseppe Moretti, who immigrated to the United States in 1888. The museum tells visitors of the statue's and Birmingham's history. The park and the observation deck surrounding the pedestal, offer great views of the city. 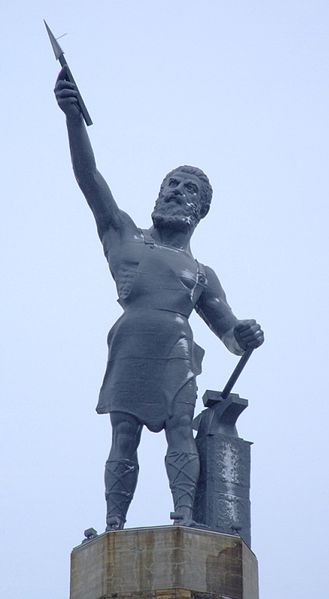 Birmingham was founded in 1871 and quickly became a booming industrial town, thanks to the plentiful iron ore, coal, and limestone deposits here. To promote the city's growth and industrial identity, city leaders and prominent businessmen decided they wanted to present a statue at the 1904 World's Fair in St. Louis. They commissioned Moretti who by that time earned a reputation around the country for his work. Moretti chose the Roman god, Vulcan, to represent the city. With only five months to work, Moretti was able to create the enormous mold and send it (in pieces) to Birmingham, where local iron was used to cast it. The pieces were then sent to St. Louis to be assembled.

The statue won the grand prize at the fair, but lost its admiration soon after it ended. The statue was eventually assembled, incorrectly (its hands were backwards), at the Alabama fairgrounds. This was meant to be a temporary arrangement but remained there for three decades. Finally, it was erected on Red Mountain in 1939. The museum and park opened around this time as well. By 1999, the statue and park grounds were in need of serious restoration. Vulcan was re-erected in 2003 and the park opened a year later.