The Maritime Museum is headquartered in the 1868 former carriage house for the Joseph Francis estate. This building was in very poor condition when the society leased it from the county with the condition that the building be restored and maintained by the Seaport Society. The downstairs portion of the building, that once housed carriages and horses, now houses the library, ships store, ship model displays, and a small boat display. Upstairs was the grooms quarters and hay loft and is now an artifact display room, office, and meeting / work room Outdoor storage sheds were added to the property and now contain part of the societies collection of wooden boats. The restoration shop was built alongside the museum, to provide much needed work space and tool displays. The museum has constructed a building to house the A-cat Spy and other local boats. This building will be located on the south-west corner of the property, bordering Hooper Ave. and River Road. The museum has a large collection of Barnegat Bay Sneakboxes including the 20 foot racing sneakbox Stormalong, Slade Dale's camping sneakbox Sheldrake, a 15 foot racing sneakbox, and a Barnegat Bay duckboat, the Delux Duck that competes in the annual Duckboat world championship. 1 "Maritime Museum and Displays." 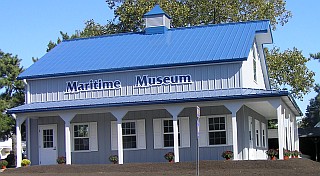 Joseph Francis dedicated his whole life to the cause of humanity and progress. His many inventions changed the course of manufacturing and allowed new products to be developed. His inventions in life saving contributed to countless lives that were saved in the waters of the New Jersey coast and throughout the world.

In his early years he made improvements in wooden boats and other means of saving lives. Among the wonders that Mr. Francis brought to the 19th century were two devices that would save thousands of lives imperiled by shipwrecks worldwide. He invented the process of corrugation which allowed him to produce the Corrugated Metallic Life Boat, and the Corrugated Metallic Life-Car. By means of heavy dies and a hydraulic press he was able to corrugate iron and other metal plates. This corrugation of the metal plates stiffened them so that a light but perfectly strong boat could be built. "... to him is due the credit of introducing the era of iron shipbuilding." In addition he successfully produced other valuable improvements and inventions such as the Nautilus Life-preserver, reverse bottom life boats, portable screw boats, molded boats, life and anchor boats, corrugated pontoon wagons, steamers, floating docks, stop corrugation, harbor and channel buoys, etc. He improved wooden life boats by including self righting and self bailing. By 1841 all government vessels and nearly all merchant ships sailing from New York City had been provided with his life boats.

By 1819, he was 18 years old, and had built a prize winning rowboat. The prize was awarded by the Massachusetts Mechanical Institute. In 1830 he built the "Seadrift", a 30 foot, four oared rowboat of 1/4" Spanish cedar, fastened by copper rivets, and weighing only 600 pounds. His process of prefabrication produced a portable screw fastened boat that was easily assembled on site. Another of his boat building inventions was the pre-made form. The boats were built upon these forms which produced an exact duplicate of the hull. These boats were made of 1" square cedar strips nailed edge to edge to hide the fastenings, therefore eliminating the caulking process. In 1843 he produced his first corrugated metal boat using the molding process with cast iron forms. The hull was made of 18 gauge galvanized sheet metal, riveted together.

In 1844 his corrugated Metallic Life-Car, outfitted with cork fenders to protect it from being beaten against the shipwrecks hull, began to save lives. In the month of January of 1850, in a blinding snowstorm, his Life-Car saved 200 lives of 201 who on board the British emigrant ship Ayrshire. The wreck was just south of Long Branch, NJ. Within four years 2500 lives and a large amount of valuable cargo had been saved by Francis' Life-Boats and Life-Cars, these being in use in nearly every part of the world. In 1885 the Ayrshire life-Car was presented by the inventor to the National Museum in Washington.

His invention of the "stop corrugation" system allowed the ends of corrugated metal to be joined smoothly. He had production facilities in Hamburg, Germany and Liverpool, England where steamers and floating docks were produced for Europe and Russia. In 1848 he built a corrugated copper barge and a corrugated iron barge for exploration of the Dead Sea and the river Jordan. He was noted in the Marine Journal by the Russian Imperial Navy in November 1860 for his floating docks and barges.

In 1888, a joint resolution, tendering him the thanks of Congress and authorizing the President to cause a gold medal to be prepared, brought him recognition from the national government and in April 1890, the medal was placed in his hands by President Harrison. This medal was the largest ever bestowed by Congress. It was designed by St. Gaudens and cost nearly $6000. In April 1892 the aged inventor was introduced to the U.S. senate by unanimous consent of that body - an unusual honor.

Mr. Francis was a life member of the American Institute and a member of the Ancient and Honorable Artillery Co. of Boston. He Authored the book "life Saving Appliances" and contributed to many periodicals

This short walk through Toms River includes stops at some of the community's historic homes as well as the Ocean County Historical Society Museum and the Toms River Seaport Society and Maritime Museum. The tour consists of entries authored by the Ocean County Cultural and Heritage Commission.