The Betsy Ross House is a historic home in Philadelphia alleged to be the site where the first American flag was created. The Arch Street residence was built around 1740, and during the 1770s it was home to local upholsterer Elizabeth “Betsy” Ross. According to popular legend, Ross was asked to sew the first Stars and Stripes flag in 1777. Most scholars are highly doubtful that Betsy Ross actually made the first American flag; the story did not emerge until nearly a century later. Today the house has been restored and preserved as a museum. It is open to the public for tours, and contains a large collection of artifacts, documents, and memorabilia relating to both Betsy Ross and the story of her sewing the first flag. 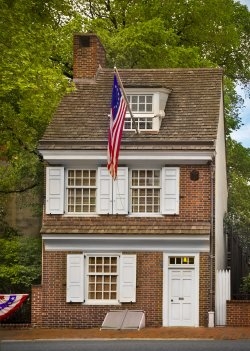 When the legend of Betsy Ross and the American flag emerged in the 1870s, it inspired many publications and artworks. This painting, entitled "Birth of our Nation's Flag," was made by Charles Weisgerber in 1892; copies of it were sold to raise money to pu 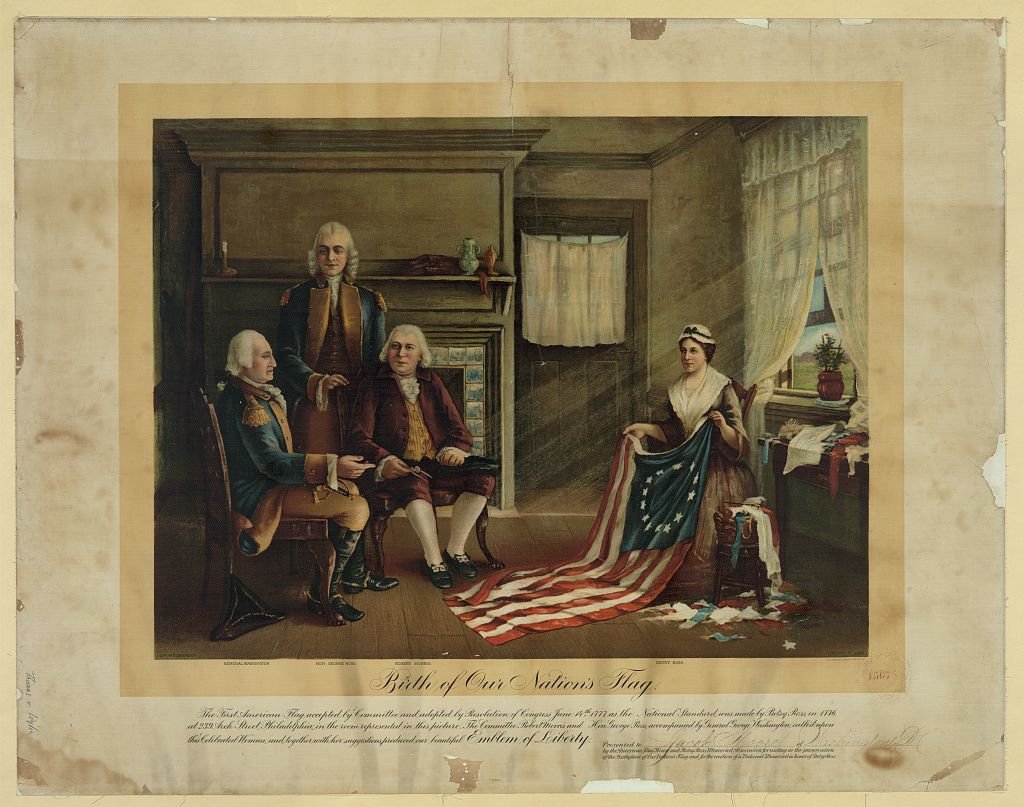 The Betsy Ross House in 1909. Image obtained from the Library of Congress. 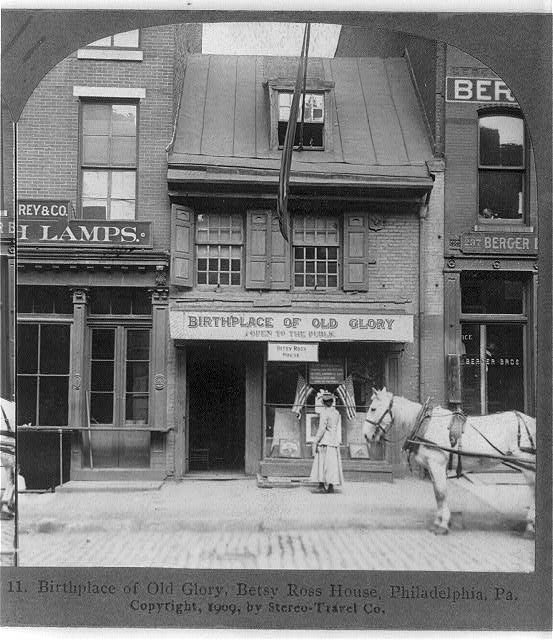 This historical site marker stands in the courtyard next to the house. Image obtained from Mommy Nearest. 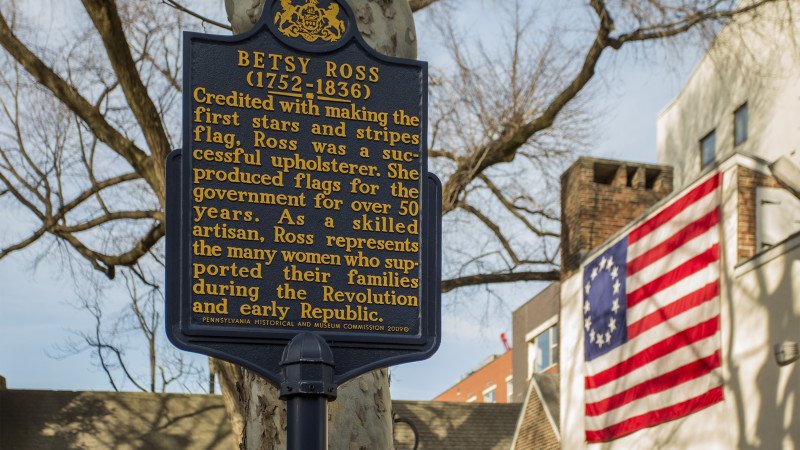 Several of the rooms are furnished to resemble a typical Revolutionary era home. 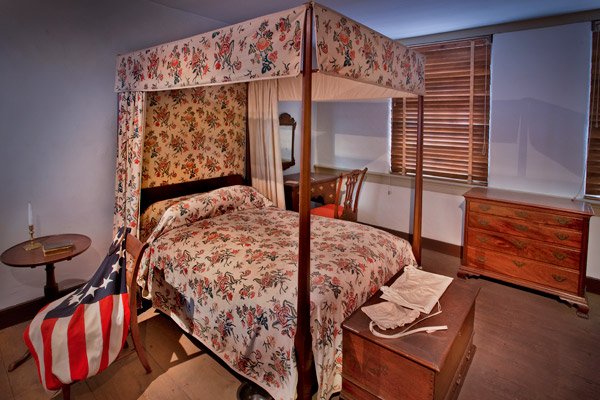 Elizabeth “Betsy” Griscom was born on January 1, 1752, the eighth of seventeen children. When she was a teenager her family apprenticed her to a local upholsterer, where she met fellow upholsterer apprentice John Ross. The two were married in 1773, and they later moved to a home on Arch Street, where they set up an upholstery shop on the first floor. The house was built sometime around 1740, with a rear section added a decade or two later. Betsy and her husband rented the home from Hannah Lithgow, who owned it and several others on the street. While the building at 239 Arch Street is considered to be where Betsy Ross lived, it is possible she actually lived in one of the adjoining buildings. Betsy is believed to have lived on Arch Street at least from 1776 to 1779.

Around 1776 Betsy’s husband John died, allegedly from a gunpowder explosion while serving in the Philadelphia militia. In 1777 she remarried to a sailor named Joseph Ashburn. In 1781 his ship was captured by British forces, and he died in captivity a year later. Betsy married again in 1783 to John Claypoole, an acquaintance of Joseph who had known him in prison. Betsy continued running her upholstery business for the next several decades, making flags and other products, before finally retiring at age 76. She died in 1836 at the age of 84. She was originally buried in a Quaker cemetery, and then later moved to a cemetery at Mount Moriah. In 1975 the purported remains of Betsy and her third husband John were exhumed and interred next to the Betsy Ross House, as part of the American Bicentennial.

It was not until 1870 that the story of Betsy Ross sewing the first American flag emerged. That year William Canby, a grandson of Betsy, delivered a speech at the Historical Society of Pennsylvania presenting the story. According to the account, in 1776 or 1777 Betsy Ross was approached by George Washington, Robert Morris, and George Ross (uncle of her first husband John) and commissioned to sew the first American flag. She was shown a proposed sketch of the flag, and made one adjustment: she used five-pointed stars instead of six-pointed. After Canby’s revelation, other descendants of Betsy Ross came forward claiming it to be true; soon the story was circulating widely in pamphlets and books. Although there is proof that Betsy Ross did make flags both during and after the American Revolution, most scholars doubt that she sewed the first American flag. They cite a complete lack of evidence to verify the story, and the fact that it did not come to light until nearly a century after it allegedly happened. Nonetheless, the story soon became widely accepted among the public, and Betsy Ross became an American icon.

After the story of Betsy Ross and the flag emerged, much attention was focused on her former home and shop on Arch Street. Over the years it had housed a variety of businesses, and by the late 1800s it was one of the only surviving colonial-era buildings in the area. In the 1870s the building housed a tavern owned by the Mund family, who used the Betsy Ross story to attract customers. In 1898 the American Flag House and Betsy Ross Memorial Association was formed and purchased the building to convert it into a museum. By 1937, the house was severely dilapidated and in need of restoration. Philadelphia radio businessman A. Atwater Kent contributed $25,000 to save the house. Historical architect Richardson Brognard Okie was hired to implement the restoration; he utilized as much of the home’s original components as possible, as well as historically-accurate parts from demolished homes. The entire house was completed and opened to the public on Flag Day, June 14, 1937. Two buildings to the west side of the house were purchased and demolished to make a garden and courtyard. In 1941 the house was given to the city of Philadelphia. An annex building was added in 1965, and a fountain added to the courtyard in 1974. Historic Philadelphia Inc., a nonprofit historical organization, assumed management of the property in 1995.

Today the Betsy Ross House remains open to the public as a museum. Many rooms are furnished to resemble their colonial America appearance. Items on display include personal possessions of Betsy Ross, as well as memorabilia relating to the legend of her flag; the museum also has an archival collection of documents available for research. Self-guided and audio tours are available, and a Betsy Ross impersonator is often on site to give demonstrations and engage with visitors. The museum hosts various events and temporary exhibits throughout the year focusing mainly on the American flag, upholstery, and women and life during eighteenth century America. The courtyard and an indoor gallery are also available to rent for different events.