On December 6th, 1907, Fairmont Coal Company mines No. 6 and No. 8 exploded near Monongah, West Virginia. Officially 362 people were killed in the explosion, though later historians and researchers place that number much higher. The resulting outcry over the disaster led to the enactment of numerous safety regulations and was a factor in the creation of the United States Bureau of Mines. The aftermath of the disaster was trying for the town’s residents and the surviving family of workers and left a powerful legacy that is still felt today.

Outside of the mine 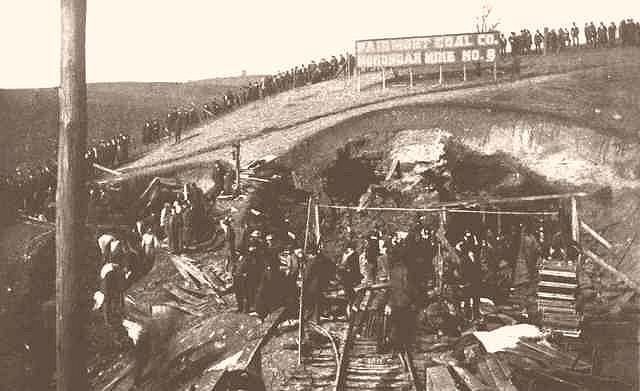 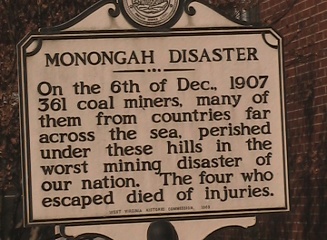 Survivors emerge after the explosion.

The mine after the explosion.

The explosion occurred on the morning of December 6th, 1907 after a train cart exiting mine No. 6, fully loaded with almost 38 thousand lbs. of coal broke lose near the top of a trestle and slid back into the mine. As the train slid down the shaft it caused extensive damage to the electrical system and destroyed support struts and beams. The ventilation disruption and air gusts caused massive amounts of dust and gas to be mixed into the air throughout the mine. A series of massive explosion erupted within the mine, blowing as much as 100 feet of earth from around one entrance, and the sound and shockwave caused damage to the town of Monongah over half a mile away. (McAteer, 110-117)

Workers on the surface of the mine were quickly taken to nearby towns via the still functioning cable car, and volunteer rescue workers were entering the tunnels within 20 minutes in an effort to find and free the 330+ workers trapped in the mine. Rescuers quickly worked to rebuild ventilating systems for the mine in hopes of preventing suffocation of the trapped miners. Hundreds of volunteers came in from Fairmont to help, driven by the emergence of some miners shortly after the explosion. Rescue was limited by gas and dust stirred up by the explosion (McAteer, 125-130). After over a day of searching and clearing all collapsed tunnels the only survivor that was pulled from within the mine was John Tomko, a Hungarian immigrant found with his deceased brother (McAteer, 137).

News of the explosions at the mine quickly went international due to the massive loss of life and international makeup of the workers. The immediate aftermath of the disaster saw efforts by Fairmont Coal managers and stockholders to deflect blame for the explosion, with President C.W. Watson claiming the day after the explosion that it could only have been caused by the careless use of a mining lamp (New York Times, December 8, 1907).  An official report by the Bureau of Mines published after the explosion listed the official death toll at 362. Experts disagreed on the cause, citing everything from torn electrical wires to improperly used head lamps (Humphry, 28-29). The poor safety standards and the poorly planned and equipped rescue efforts at Monongah helped set the stage for the creation of the Bureau of Mines in 1910, which was established to investigate and help prevent mine explosions as well as to prepare properly trained and equipped rescue crews (Humphry, 34-35). The final death toll is still disputed mines were known to employee more workers than officially listed and often didn’t include children in employee listings.

The makeup of the workers at Monongah resulted in swift international attention, and support came from many areas wishing to help their family in America. Many Italian workers at the mine came from Molise and nearby areas, today there are ongoing efforts to recognize the sacrifices and struggles of the immigrants at Monongah and monuments to the disaster are present in several regions of Italy today. (http://www.post-gazette.com/life/lifestyle/2007/12/05/Italians-arrive-to-honor-immigrants-killed-in-...)

Humphrey, H. B. Historical Summary of Coal-Mine Explosions in the United States, 1810-1958. Washington D.C.. UNT Digital Library. http://digital.library.unt.edu/ark:/67531/metadc12740/ This compiled government document, published by the Bureau of Mines in 1960, contains reports on mining accidents from 1810 through 1958. While some information within has been rendered outdated by recent scholarship it still offers valuable insight into the responses and investigations of officials into incidents involving the mining industry in the past. McAter, Davitt. Monongah: The Tragic Story of the 1907 Monongah Mine Disaster (Morgantown: West Virginia University Press, 2007). Published in 2007, this book offers some of those up-to-date scholarship available on the Monongah Mine disaster. Synthesizing existing scholarship with recent revisions and academic efforts, McAter explores the events of Monongah and its impact on mining safety adeptly.