This time capsule was recognized by the Guinness Book of World Records in 1977, as the largest time capsule in the world. The time capsule was the project of Harold Keith Davisson, a local store owner and leading resident of this small Nebraska city. The 45-ton sealed capsule is not to be opened until July 4, 2025 and contains 5,000 different items of historical significance ranging from small items such as books to large objects such as automobiles. Davisson designed the time capsule with his grandchildren in mind, building a project that would allow future generations to better understand America in the 1970s. 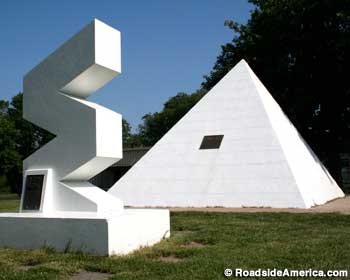 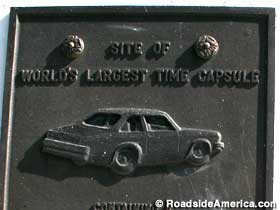 The time capsule was designed and built by one man. The man known as Harold Keith Davisson; a local celebrity, store owner, and town character. He wasn't too worried about the future only about his grand kids and his time capsule that was going to be the largest in the world. In 1975, Harold buried the 45-ton vault in the front lawn of his home furnishing and appliance store. He filled the capsule with an assortment of 5,000 items, including a pair of bikini panties, a man's aquamarine leisure suit with stitched yellow flowers, and a brand new Chevy Vega.

The capsule was sealed on July 4, 1975, and is not to be opened until July 4, 2025. In 1977, Harold's dream came true as his time capsule was certified by the 1977 Guinness Book of World Records as the largest capsule in the world. The certification didn't go without debate; the Oglethorpe University of Atlanta, Georgia, claimed it's capsule, sealed in 1940, was the largest in the world. Harold said in his defense, that there capsule is only a sealed-off room in the campus building. Guinness finally settled the dispute by dropping the category all together.

Harold wasn't the kind of person to back down from a fight. In 1983, he build another time capsule directly over the first, to remove the doubt of who's time capsule is bigger. The second capsule also included a car, no one can remember the make of the car. The second vault also included tons of telephone books donated by local citizens.

He lived long enough to see his grand kids and share things with them from his generation. Harold Davisson didn't pass away until 1999, at the age of 91. One of his final arguments dealt with the process of opening the capsule. Another capsule tried to claim his title the year after he died in 2000, but after investigation, the vault falls short in square footage and Harold Davisson's vault still holds the title.