Although the site of the Indiana Statehouse has remained the same since 1835, the current statehouse building was constructed in 1888 after the original was destroyed and renovated one hundred years later in 1988. The capitol building’s construction was highly centralized as the architects, workers, and even materials were largely from Indiana. Its cornerstone holds forty-two items significant to Indiana’s history or relevant to events of the time period. Today, its architecture still shines and holds the history of not only Indianapolis, but much of Indiana.

Exterior of the statehouse 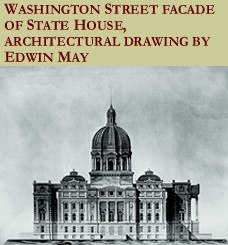 One of eight statues standing in the rotunda 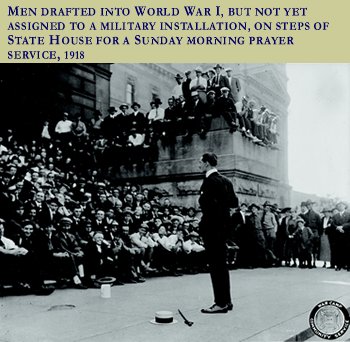 Current exterior of the statehouse 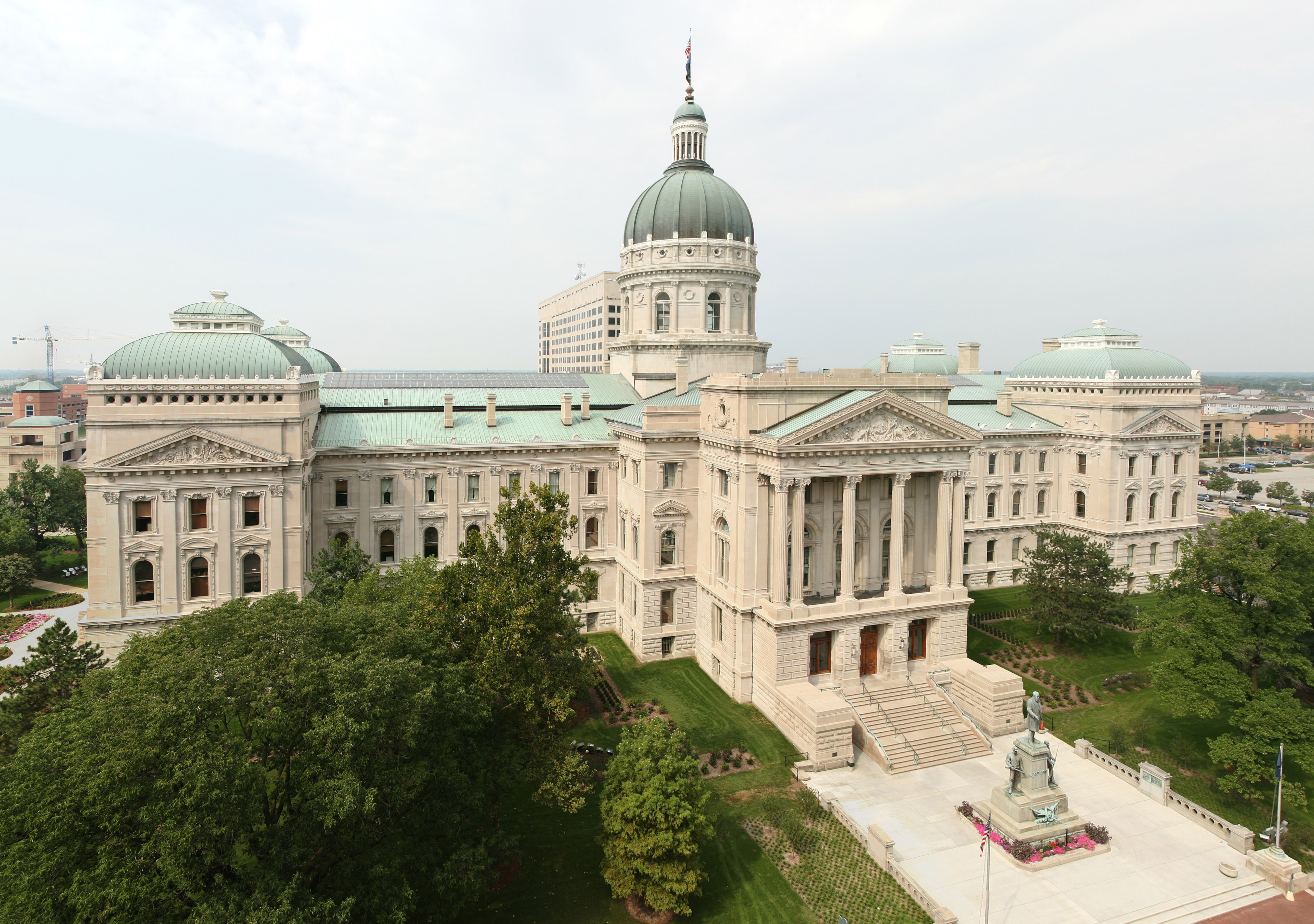 Interior of the statehouse 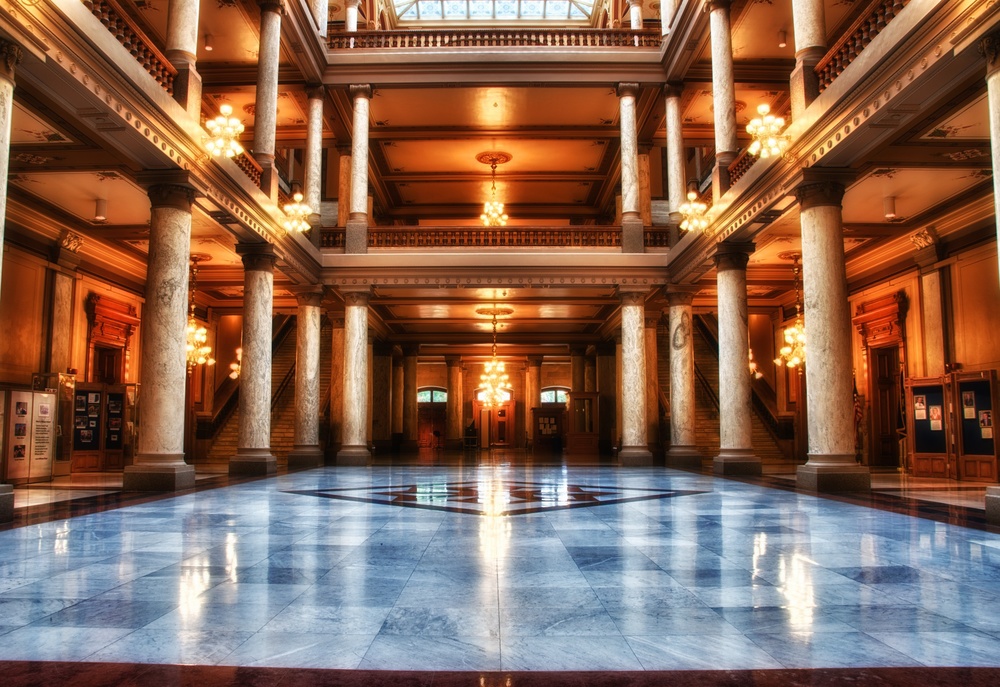 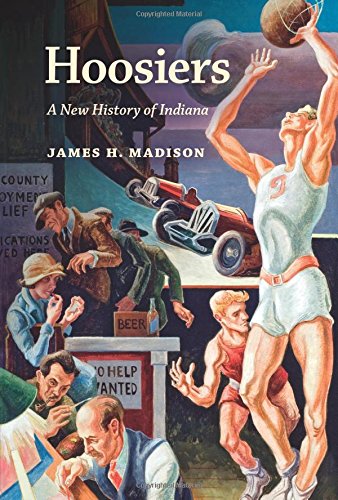 Interior view of the restored dome 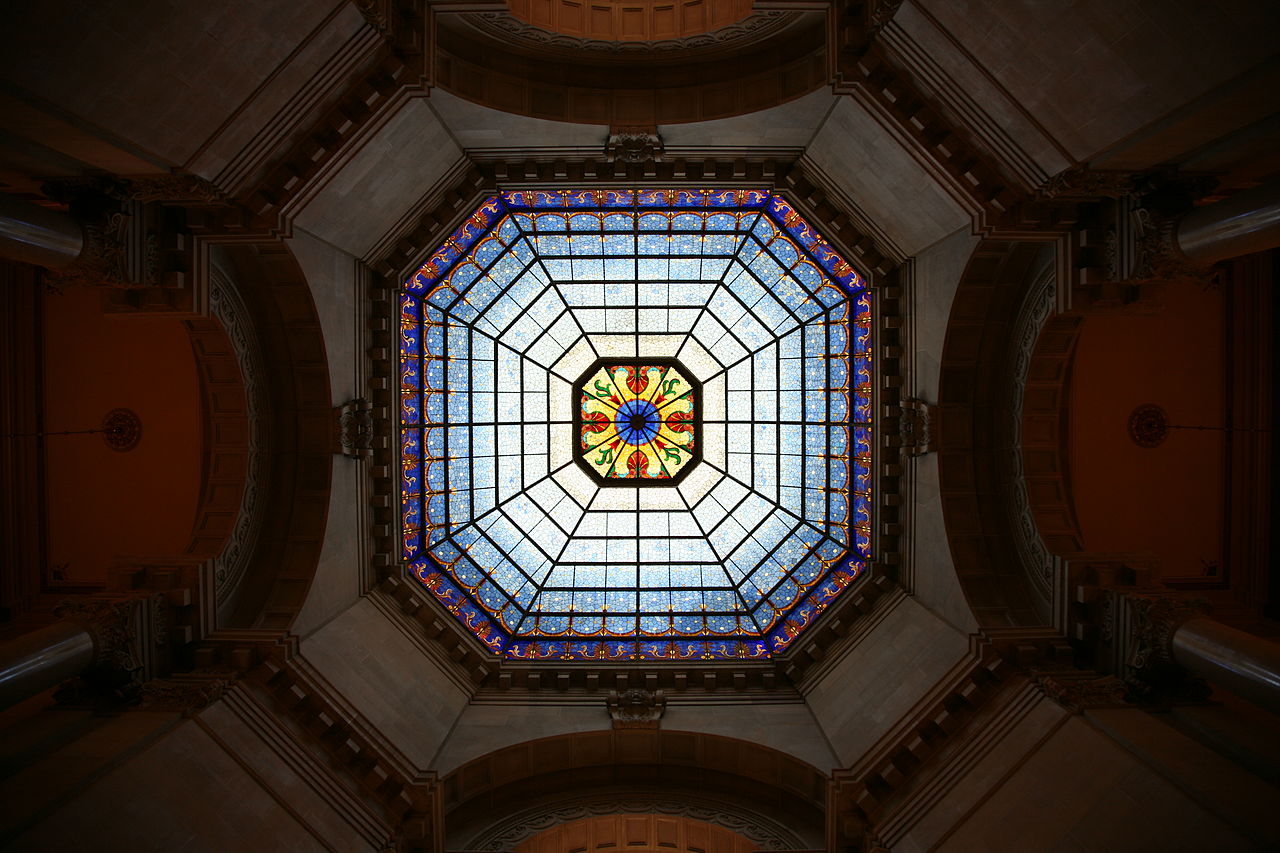 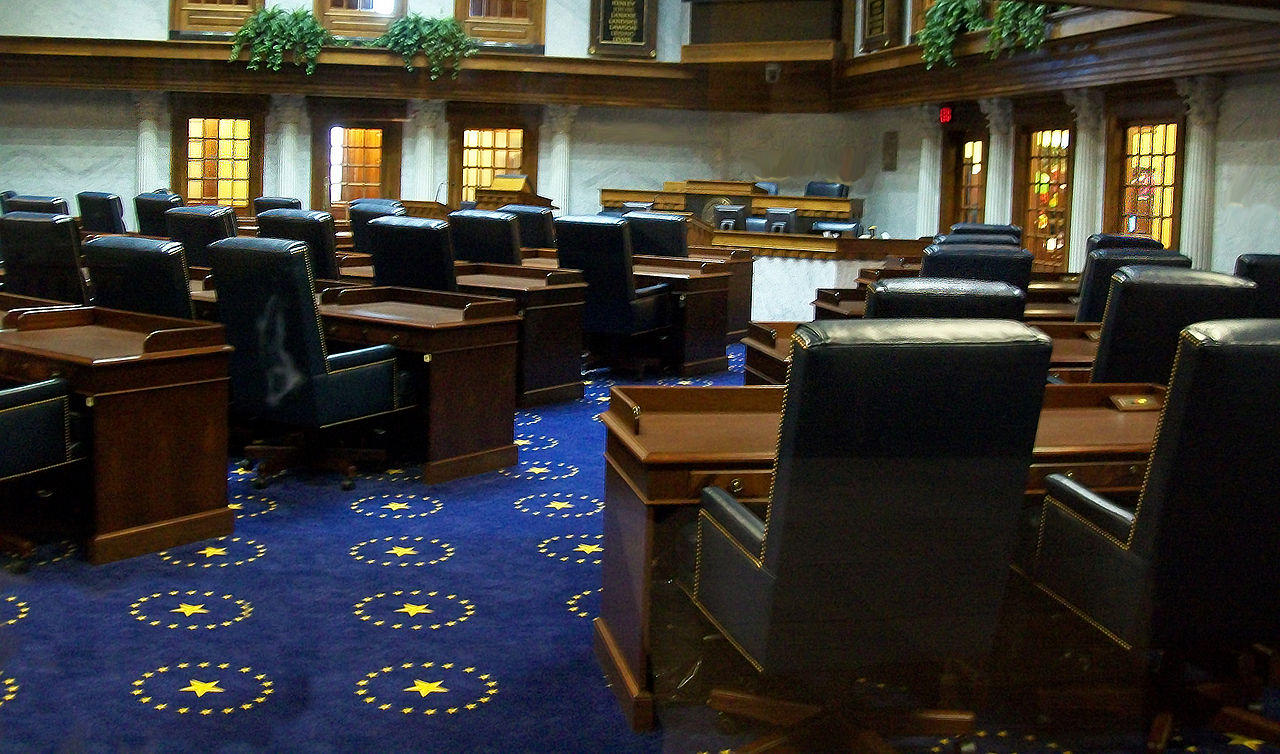 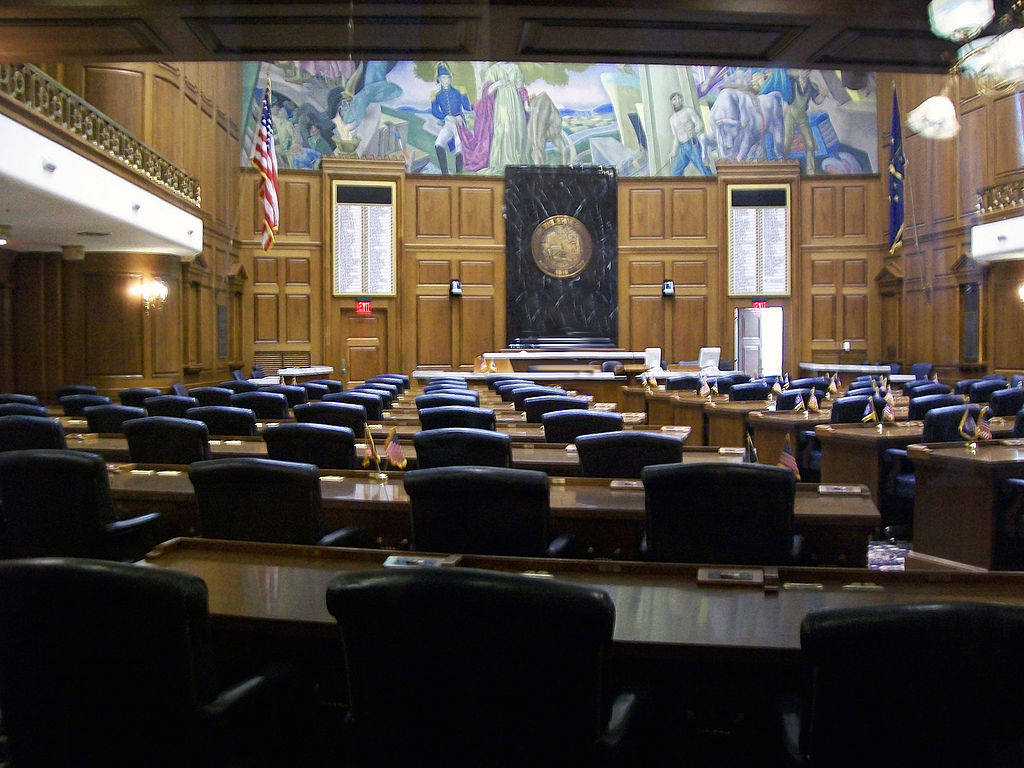 Sculpture of Justice. Created in 1888 by Alexander Doyle 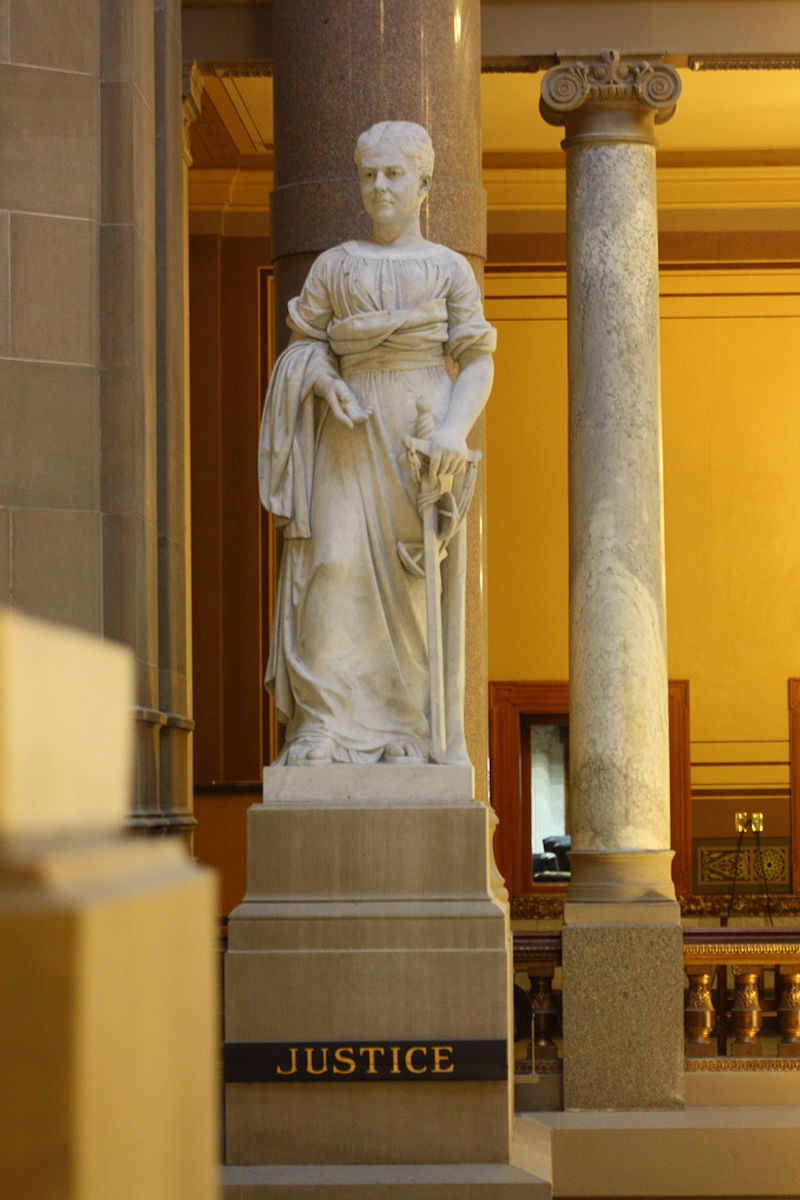 Indiana’s state government headquarters were moved from Corydon, Indiana to Indianapolis in 1825, only four years after Alexander Ralston laid out the town of Indianapolis. Over the course of ten days, official documents and the treasury of the state government were transported between the two towns in wagons. At first the legislature was organized in the Marion County Courthouse in Indianapolis, but in 1831 the General Assembly called for the construction of a state capitol building, funded by selling lots in town.

New York architects Ithiel Town and Alexander Jackson Davis proposed a plan for the statehouse and their plan was selected out of the twenty-one entries submitted. Their building plan exemplified the Greek Revival Style and was intended to "correspond in character...with the Parthenon" in Athens.[1] Although created in the Greek Revival Style, Town and Davis added a dome to the top of the structure, which proved to be a controversial move.

By the end of the civil war, however, the Greek Revival Style had fallen out of favor and the statehouse was deteriorating: the ceiling of one of its halls had fallen in and its exterior stucco was chipping to such an extent that one historian described it as “disgusting.”[i] Soon after, the structure was torn down and in its place was constructed the state’s capitol building that still stands today. In 1878 the Board of Statehouse Commissioners chose architect Edwin May’s plan for the new statehouse and gave May a budget of $2 million for its construction. The interior of the building was designed in the Italian Renaissance style; its main floor was built fourteen feet above ground level and contains many beautiful skylights. However, May did not live to see the statehouse completed. Instead, his head draftsman, Adolph Scherrer, oversaw the last few months of the building’s construction after May’s death.

Whenever possible, materials and workers from Indiana were employed to complete the statehouse. On September 28, 1880, workers laid the cornerstone that contained within it forty-two different items. These items included a Bible, maps and newspapers, new coins, forty-seven kinds of cereal and vegetable seeds grown in Indiana, annual reports from government agencies, and a history of Indianapolis. Although no women artisans are known to have helped with the building’s construction, an Indiana woman did model for the marble statue of Justice that stands in the rotunda.

In the late 1980s, the statehouse underwent a major restoration. Domes were restored, woodwork removed and replaced, marble polished. All work and additions to the building stayed true to its original character and history; the revitalized statehouse was highly praised. Today, the collection of monuments on its lawn provide a political and social history of Indiana, depicting everything from Christopher Columbus to coal miners. The Indiana statehouse building has a rich history, having experienced numerous strikes, marches, speeches, and other events that took place in Indianapolis, often on the statehouse steps.

This tour starts at the Soldiers and Sailors Monument and proceeds to historic sites around the city's famous Monument Circle before heading south and west to see historic buildings, markers, and the statehouse. The tour concludes at the Indiana State Library and Historical Bureau. Visitors to the city will also enjoy the War Memorial Plaza walking tour.