The memorial was created to commemorate the 75th anniversary of the Battle of Gettysburg and dedicated at a ceremony featuring Union and Confederate veterans on July 3, 1938. The memorial can be found at the top of Oak Hill, northwest of Gettysburg. The monument is made of granite, stands 47 feet, and features an eternal flame dedicated to peace and reconciliation. The monument's dedication ceremony was attended by 250,000 people, including 1800 Civil War veterans, President Franklin Roosevelt said “All of them we honor, not asking under which flag they fought then – thankful that they stand together under one flag now.” The unveiling marked the completion of an idea that began when Civil War veterans met at Gettysburg to mark the 50th anniversary of the battle. Desiring to erect a memorial that reunited the nation, funds were donated by states from both sides to finance the $60,000 project. Symbolic of the union of north and south, materials used to create the Eternal Peace Light Memorial included Maine granite for the base and Alabama limestone for the shaft. The inscription reads “Peace Eternal in a Nation United”. 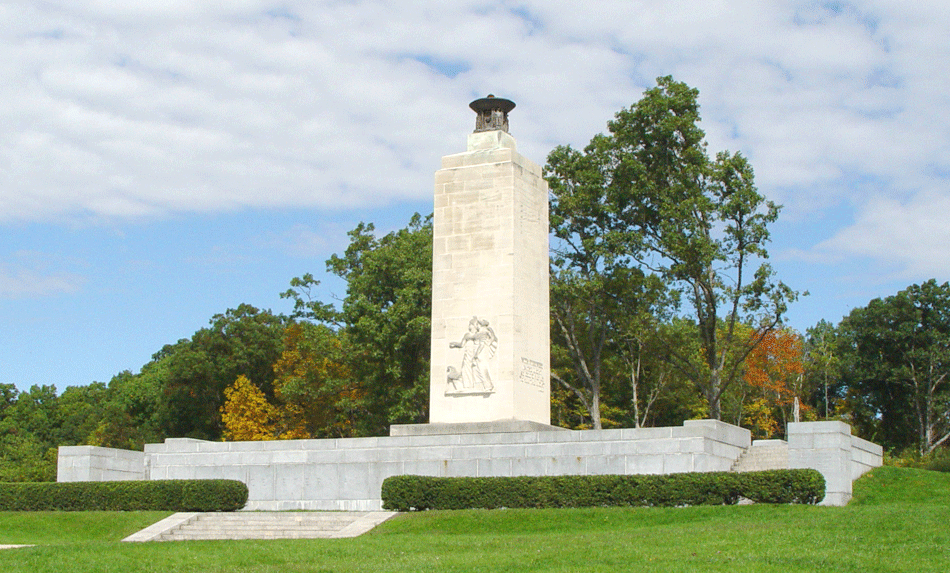 View across the battlefield at Gettysburg Picture from Stone Sentinels 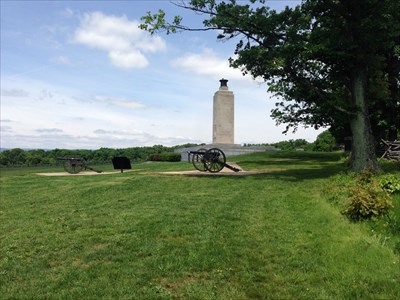 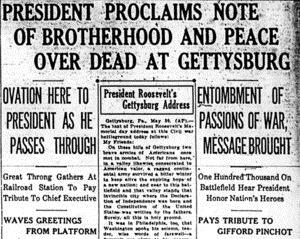 The dedication ceremony. Picture from the Gettysburg Journal 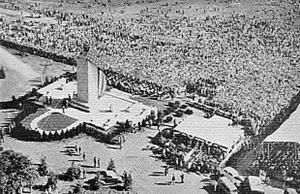 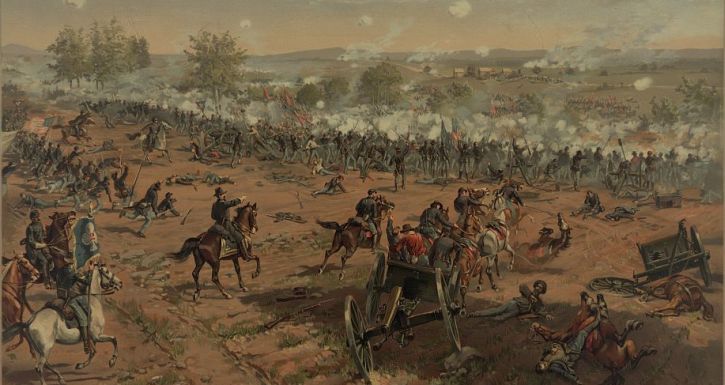 The Eternal Peace Light Memorial is a commemorative monument erected to honor peace and brotherhood on the site of one of the bloodiest and most significant battles of the Civil War.  It is in this proximity that Confederate General Robert E. Lee brought his Northern Virginia army to battle the North on its own land.  Lee’s hopes were to relieve his battle ridden home state of Virginia and dishearten the Northern support for the war by being victorious in a battle on northern land.  Having heard of Lee’s advancement towards a small Pennsylvanian town with a population of 2,000, newly appointed General George G. Meade positioned his Union troops between Lee’s army and Washington, D.C.  Lee congregated his army in the fields of Gettysburg ready to battle Meade.

Two days of bloodshed ensued within the surrounding area of Gettysburg and on the third day the battle continued on Culp’s Hill while cavalry battles continued to the east and south.  The third day of the Battle of Gettysburg is referred to as the main event.  It was on this day that 12,000 Confederate soldiers launched an infantry assault on the Union line in an attempt to split the line and conquer the divide.  This assault is referred to by historians as Pickett’s Charge and took place at a location now known as Cemetery Hill.  The Union retaliated with heavy rifle and artillery fire and the Confederate Army suffered great losses.  Lee retreated and led what was left of his army back to Virginia.  After three days of fighting on the lush farm fields of Gettysburg 51,000 soldiers from both armies died, were wounded, captured or went missing.  Months afterwards President Abraham Lincoln visited the battle site where he delivered his now infamous Gettysburg Address, honoring all of the soldiers who made the greatest sacrifice.

On the day the Eternal Peace Light Memorial was dedicated it was draped in a 50 foot American flag and unveiled by a veteran of the Confederate and Union army.  Pulling back the American flag revealed a granite and limestone monument that was designed by French Architect Paul Philippe Cret and sculpted by German sculptor Lee Lawrie.   Atop the 47 foot lime stone shaft sits a one ton bronze torch, powered by natural gas.  The intent was for the flame to always burn signifying peace.  Designed to stay lit during heavy rains and strong winds an auto relight was built into it in case it would happen to extinguish.  Although the torch was designed to ward off natural occurrences, it could not withstand the decision to shut the flame down to a dim pilot light level during World War II so as to hide its light from any possible enemy aircraft attacks.  Snuffed out in 1970 as a conservatory measure during the energy crisis the light was converted to electric in 1979.  Nine years later, in 1988 it was restored to a natural gas torch which is how it is fueled today.

Memorializing the soldiers who fought in both armies at a time when a country was in unrest and recognizing the sacrifices that were made, leaves a battlefield, once a farmland with scars and ghosts that are softened and tamed by the inscription “An Enduring Light to Guide Us to Unity and Fellowship”.  The Eternal Peace Light Memorial serves as a constant reminder to the importance of peace and the significance of honor.